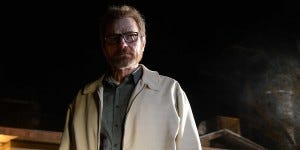 SOURCE-“Breaking Bad and Better Call Saul creator, Vince Gilligan, and actor Jonathan Banks will appear on the upcoming MythBusters episode on the Discovery Channel.The pair will myth-bust the homemade machine gun in Walter White’s car from the Breaking Bad series finale.They have yet to state when the episode will air”

I mean, no matter what they “prove” I’m gonna believe Walter White. The dude was a genius. He didn’t need silly facts on his side. He just knew how to get shit done. The guy just dissolved dozens of bodies without getting caught, so I’m way beyond questioning him. But there are some people who question how Walt went out. Now these nerds from Mythbusters don’t have the drive or determination of Heisenberg, so I won’t be surprised if they can’t get it done. But it would be nice to prove the haters wrong. There are no plot holes in Vince Gilligan productions. You can’t convince me otherwise.

I’ll take any excuse to watch this scene. Obviously we all loved Jesse choking out that creep, Todd. But the best part is the science. Walt coming up with that plan and executing it to perfection. If Mythbusters tells me that’s not real, that’s like telling a kid there’s no Santa.