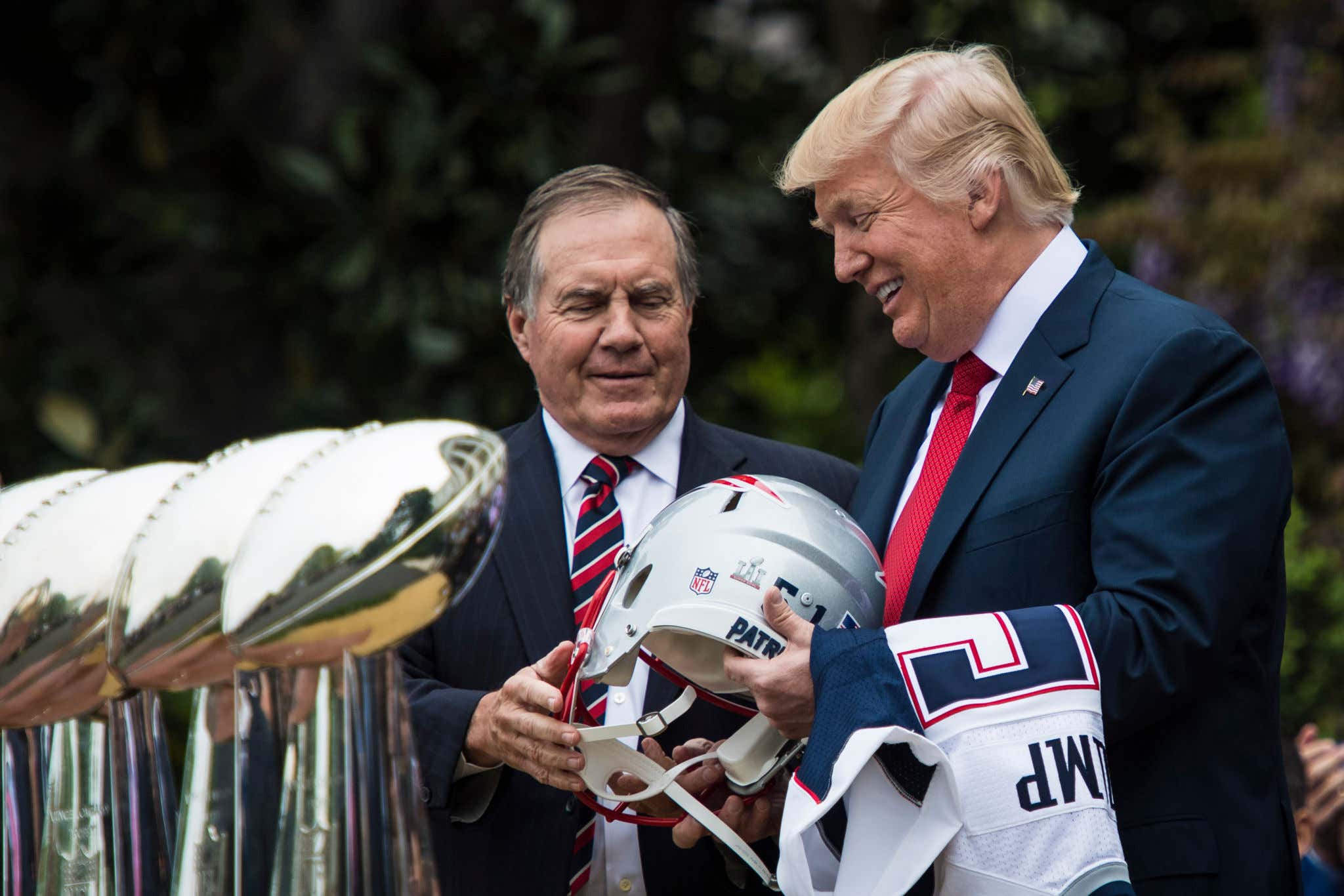 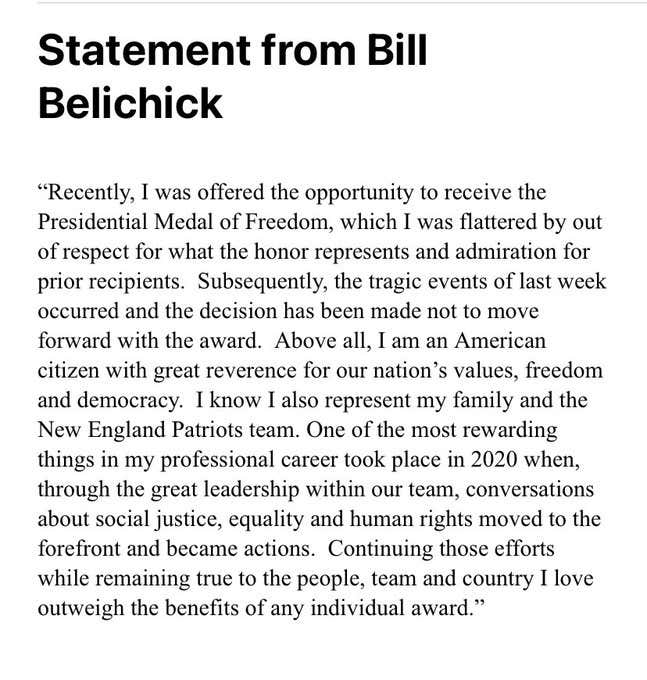 Third century B.C. Greek poet Sophocles said, "To be doing good deeds is man's most glorious task." Ben Franklin said, "It takes many good deeds to build a good reputation, and only one bad one to lose it." But I think the most accurate quote on the subject is one that has no author, but has been true since the dawn of time.

Bill Belichick just did something that, as far as my research (five minutes on Google and Wikipedia) can tell, no American in the 60-year history of the Presidential Medal of Freedom ever has: Refused to accept. There have been 653 recipients in all, and none turned the highest civilian honor the nation offers down for any reason whatsoever. Not on moral grounds. Not in protest. Not to object to some presidential action. Nor has anyone turned theirs in. Even convicted serial rapist Bill Cosby still has his. Plenty of Brits have declined similar honors. For instance, David Bowie, Stephen Hawking, George Bernard Shaw and Lawrence of Arabia are just a few of their countrymen who declined Knighthoods. But you'll have to take the Medal Trump gave to Mariano Rivera from between the Sandman's cold, dead, cutter-throwing fingers, mister.

So Bill Belichick stands alone. He had to make the choice between receiving an honor every American dreams of. One that would make his late parents, the woman in his life, his children and grandchildren proud. To add an honorific to the first paragraph of his obituary. Or to do the difficult thing and follow his convictions. To put the greater good ahead of his own. And in doing so, turn his back on someone who's been his friend since they were hanging out on the Meadowlands sidelines in the mid-80s. As anyone who truly values friendship and loyalty will tell you, that's one of the hardest things to do, no matter how wrong your friend is. But Belichick took the harder road others haven't and did what he thinks is morally right.

And for that, he's getting universal praise, right? Wrong. This is still 2021. There's always some Blue Checkmarks who can't bring themselves to give credit where it's due. No matter how much it's due.

Mike Florio - [H]ow much credit does he really deserve? Was this a selfless act in the name of country, or was it an act of self-preservation in the name of his coaching future?

The carefully-drafted statement from Belichick suggests it was the latter. Through artful use of the passive voice, Belichick never identified the person or persons who made the decision that he won’t accept the award. Was he trying to avoid angering Donald Trump, or was the statement aimed at implying that either someone else made the decision or that Belichick reluctantly made it under pressure from others but doesn’t agree with it? ...

Per multiple sources, Monday included extensive discussions and communications within the Patriots organization aimed at getting Belichick to choose a path that would preserve his reputation and the reputation of the team he coaches. Whether in the form of fan complaints, media critiques, or free-agent consternation, multiple reasons existed for Belichick deciding to keep his distance from Donald Trump.

Although Belichick preserved that distance, he has not yet disavowed his past support for the outgoing president.

Even The Guardian, while largely crediting Belichick's decision, had to throw shade at it at the same time:

The passive voice of the statement, “the decision has been made,” suggests that this wasn’t solely Belichick’s call, but even so, he should be praised for ultimately doing the right thing.

To review: For about 24 hours, Belichick was being questioned - and borderline character assassinated - across the country from supporters and enemies alike about whether he would "do the right thing." Then he did. And now they're going to question the manner in which he did it.

We don't like his word usage. That verbiage is strange to me. Why did he select the passive tense instead of first person singular pronouns? Deeds aren't enough, we have to love your words. Why can't you be exactly the same as me??? Like we're grading his book report on "Last of the Mohicans." And now we're supposed to question whether he talked to other people in the Patriots organization.

Gee, ya think he might have? This is a multi-billion dollar operation. One of the five most valuable franchises in all of professional sports across North America and Europe, and Bill Belichick is the man who built the empire. In the most divisive moment in American history since the Civil War. At a time when everything you say alienates somebody. With stakes that were no less than deciding between accepting a great honor and making history by refusing it. Do you think that was maybe worth a meeting or two to figure out how best to proceed? How best to balance the personal good of the face of the franchise with how it would affect the franchise? Now we're all supposed to parse the grammar of a carefully worded statement instead of respecting the fact that a good man followed his moral compass and did what he thinks is right for all involved. Because Blue Checks still aren't satisfied because he didn't say it exactly the way they wanted it said.

Remember this the next time you make a personal sacrifice for the greater good. Welcome to 2021. Same as 2020, only suckier.