UConn came into the game tonight as 4.5-point favorites against Depaul. Definitely a weird line, some would call it a trap, but the Huskies are without star James Bouknight for a second straight game.

The 1st half-line was UConn -2.5....UConn was up 17-6 early only for Depaul to come storming back. UConn was up 31-30 with 36 seconds left. They missed a shot, RJ Cole got the offensive rebound, and found Tyrese Martin on the opposite side of the court. Martin had a wide-open layup with 2-seconds left....he missed it.

The clock hit zero...but a foul was called! 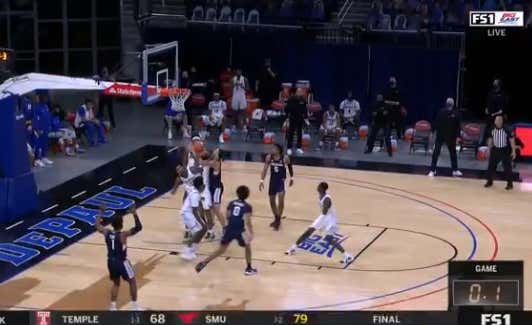 The buzzer rang, so both teams went to their lockerroom. FS1 went to commercial. Depaul +2 was a winner….until we returned to Depaul's court after a Rocket Mortgage commercial. Tyrese Martin had 2 free throws to cover and of course, he made both.

Depaul +2.5 1st half bettors….look away. May want to sit out the rest of the night.