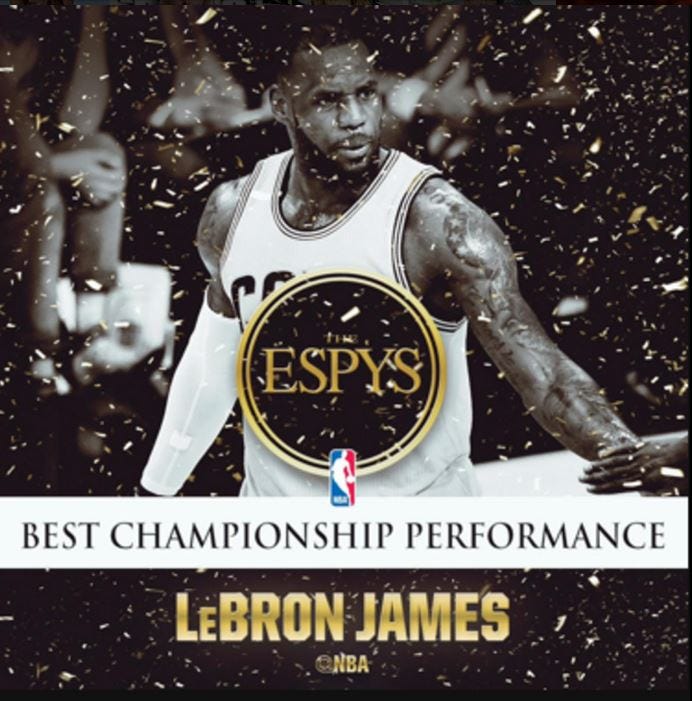 (ticker tape photoshopped in since the Cavs got smushed)

Listen I know the ESPY’s are a sham.  I know ESPN is a sham.  I know the only thing they care about is promoting Lebron James and Peyton Manning.   But still are you kidding me with this shit?  How was he even nominated for this award?  The Cavs got their doors blown off in the NBA Finals.  Meanwhile American Pharoah won the triple crown for the first time in 50 years. Tom Brady was electric winning his 4th Superbowl ring. Madison Bumgarner single handedly won the World Series.  And yet somehow they gave it to Bron Bron for getting emasculated yet again on the worlds biggest stage?   UNREAL.   Like I know it shouldn’t make me mad, but I almost want to cancel the rest of my vacation, lock myself in a room and write 100 Lebron hate blogs for the next week straight.  ESPN is such a joke.  The ESPY’s are a joke.  Bron Bron is a joke.  All I can say is thank god you can’t vote for who wins championships because Bron Bron would never lose.  But as it stands you still got to win titles on the court which is why he almost never wins.