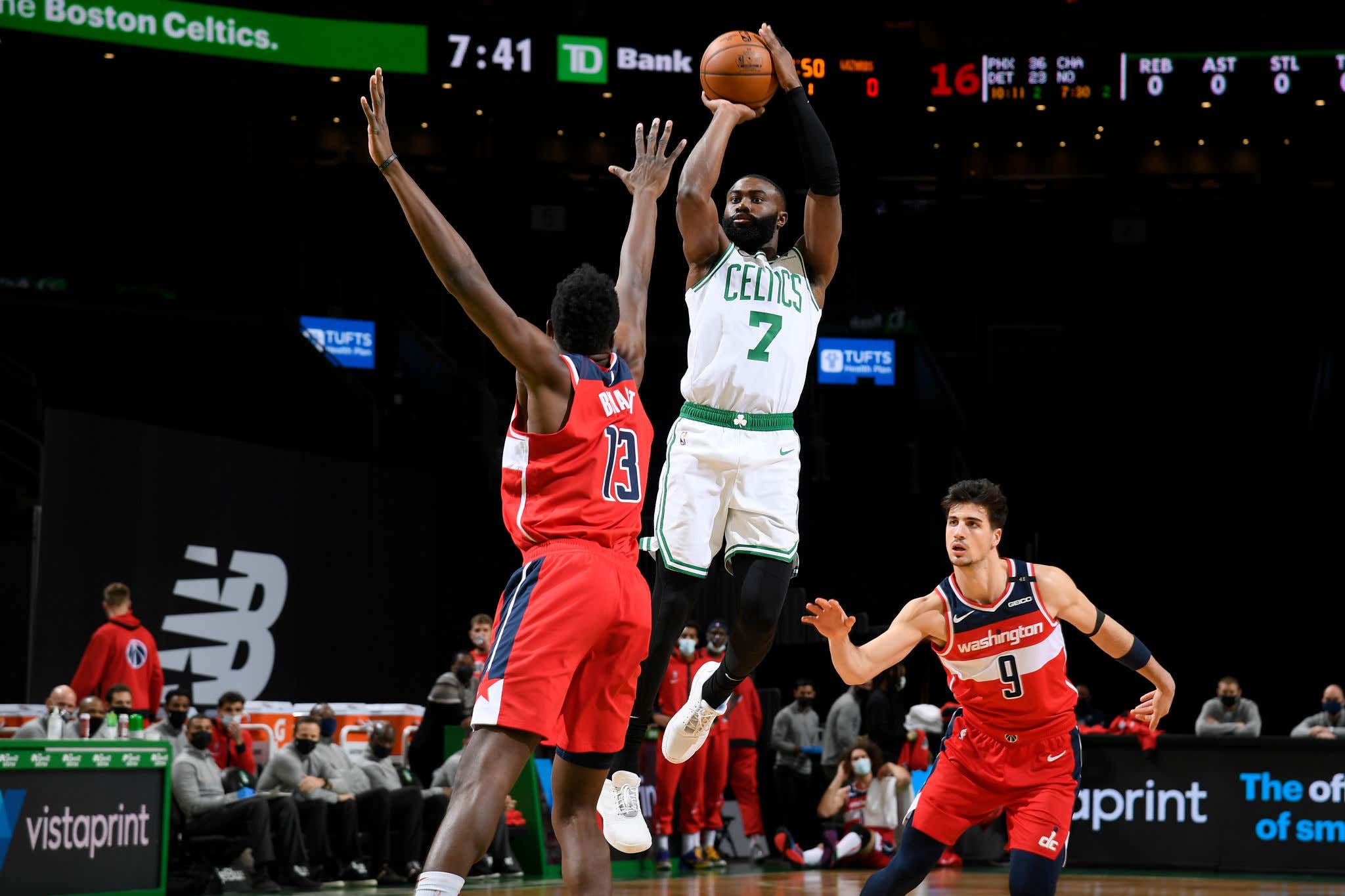 If you're like me, you have thoroughly enjoyed the start to Jaylen Brown's season. He's playing at an All NBA level and it's a huge reason why you see the Celts tied for the best record in the league and the longest current winning streak in the NBA. I think we were all hoping Jaylen would take another leap in this new #2 option role, but I don't any of us could have seen this version of Jaylen coming. Even if you think his averages come down slightly once Kemba is back and the shot distribution is different, there are plenty of reasons to believe that this version of Jaylen is real. For me, it's more about his offensive approach than anything else.

When Gordon Hayward decided to take his talents to the Hornets, it left a glaring hole in the Celtics offense. What made Hayward so good was how he could use his size and athleticism to get into the midrange where he was basically automatic. The hope was that somehow one of the Jays would be able to replicate that after not really being all that good from midrange previously in their careers.

Earlier in his career, the more Jaylen dribbled, things usually went south. This season? He's attacking with a purpose. Did you know he's shooting 65.6% when dribbling 3-6 times? If that number jumps to 7+, he's shooting 45.5%. I don't know about you, but I now trust when Jaylen puts the ball on the floor and helps create. The difference in this season is now he's finding a way to get into that sweet spot that Hayward made a living getting to.

Through 10 games, Jaylen is shooting around 4 midrange jumpers a game at a 65% clip. He's currently 12th in total midrange jumpers. Last year those numbers were 1.8/42%. The year before it was 1.4/38.6%. In 2017, you were looking at 1.2/39.5%. What was pretty much never a weapon has turned into the thing that has truly unlocked Jaylen's offensive potential. The Celtics go about getting Jaylen these highly efficient looks a few different ways which is what I want to talk about because as you'll see, they are mostly pretty sustainable.

Here's something you never really saw from Jaylen or this offense in his previous seasons. It starts with Jaylen being off ball and someone going over to set a nice perimeter screen for him. Sort of like this

This is important for a couple of reasons. First, it allows Jaylen to free himself up for an easy catch, but also gives him the immediate choice to attack the big who is dropping in coverage. By the time Jaylen catches this ball at the top of the arc, Turner is already in the circle as he begins to slide back. Jaylen recognizing that space and immediately going into his jumper is exactly what I want him to do in that situation against an elite shot blocker. It may seem small, but we rarely saw Brad create shots for Jaylen using this approach in prior seasons.

Here it is again

Once again we see Daniel Theis with an off-ball screen that allows Jaylen to catch the ball already going downhill. You can see Olynyk is below the FT as soon as he catches it. With no hesitation, Jaylen goes into his jumper. It's simple, yet effective.

On the season, coming off screens Jaylen is averaging 1.13 points per possession while shooting 53%. He currently ranks in the 75th percentile of all players. Seems pretty effective to me.

With this set, you start to see Jaylen's development as a P&R ball handler. These plays are all about recognizing a defense's weakness on the fly and then making the right decision in a split second. In the DET game, look at how low Plumlee is as Jaylen comes off the screen. Then look at the MIL one and watch Brook Lopez. In both situations, Jaylen had to make a decision as the ball handler, realize the drop coverage was there and the midrange was wide open. That's the type of quick thinking and play recognition that Jaylen has struggled with in the past. In prior years, he probably takes this to the rim for a contested layup that doesn't fall. Now, he has the confidence to step into that midrange shot and cash it.

Even if it takes multiple screens like this play

we're seeing Jaylen display a great amount of patience on offense when attacking. Things are slowing down for him and it's making a huge difference. Early in his career it felt like Jaylen was going 100000 MPH. This version looks like a player that has the game slowed down. That's what all the best scorers in the league say. That things truly click once the defense slows down for them, and they are allowed to pick their spots.

As a P&R ball handler, Jaylen is averaging 0.92 ppp while shooting 53%. Considering he basically never did it before, I find that really impressive.

Normally, isolation is the kiss of death for this team. More often than not it ends with some highly contested three. But with Jaylen? His isolation offense feels different. Instead, he's using his size, speed, and strength to attack his primary defender and get to that sweet spot.

Whether it's in the half court or in transition, we're at the point where Jaylen isn't even worried about his primary defender. They may as well not even exist. This version of Jaylen is also not a man that has no plan when he catches the ball. That's the biggest difference in his game to me. It's like he's able to recognize where the defense will be weak before he even catches the ball, and then once he has it he uses the confidence in his handle to get him to those spots.

The fact that Jaylen has developed into a consistent and deadly three point shooter is pretty important. Not just because of what he can give you behind the arc, but also what it does to open up his thriving midrange game. If Jaylen is on the perimeter, teams HAVE to close out hard on him or they'll pay. Instead of forcing a bad contested three, we're starting to see Jaylen do something like this more and more

A simple attack of that closeout is all Jaylen needs. I'm starting to think this was a talking point with the coaching staff because we're also seeing Semi do this a whole lot more of this as well. Given the time and score of that play, that shows me Jaylen is maturing on the offensive end. He could have faked and then re-taken that three. But he can see Lopez is out of position as soon as he catches the ball and gets to his spot before anyone can even contest the jumper. Sometimes it's the small tweaks that can make a huge difference.

So if you were wondering why Jaylen has gotten off to such a huge start, his development as a midrange scorer might be the biggest reason. Think of how devastating someone like Kevin Durant or Kawhi Leonard is in the midrange. If you want to take a big time leap, you need to be automatic from that zone. For a streaky offensive team like the Celtics, having someone who can be extremely efficient and get to this zone whenever he wants is beyond crucial. It's the one missing piece that Jayson Tatum still needs to add. In order to do that, the biggest part is being able to read and react to the defense on the fly which Jaylen is doing in spades.

If I had to guess, now that this tape is out there, we're going to see teams defend the Celtics much differently moving forward, especially in P&R. I would guess we're going to see guys stop dropping so much allowing Jaylen to operate with all that space. The interesting thing will be how Jaylen counters. Will he use his strength to then blow by that defender and finish at the rim? It's sort of a pick your poison situation now. If you leave Jaylen any space from the midrange, he's going to kill you. If you play too far up, he's too big, strong, and fast with an improved handle that he'll get to the rim at will.

Jaylen Brown has mostly been unguardable this season, and for me it all comes back to the midrange game. Without it, he could still put up All Star caliber numbers, we just saw him do it last year. But with this now in his bag, it's what allows him to take that much needed All NBA leap that we are all currently witnessing.