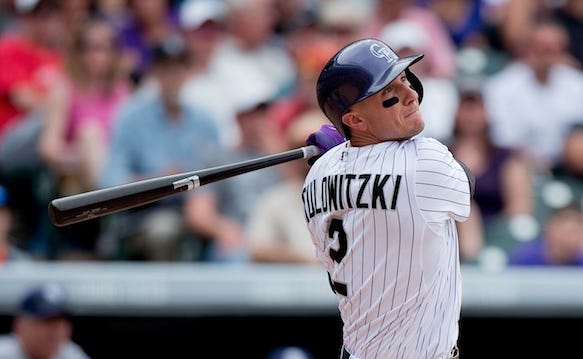 CINCINNATI — All-Star Troy Tulowitzki said Tuesday he is not seeking a trade from the Rockies to the Mets or anywhere else. But he sure has a lot of respect for the pitching staff the Mets have built. “The Mets pitching staff is phenomenal,’’ Tulowitzki told The Post at the All-Star Game at Great American Ball Park. “Pitching wins and if they keep that intact, they are going to be good for a long time.’’ That’s quite the endorsement from the shortstop who is having a bounce-back season, batting .313 in 79 games with 10 home runs and 49 RBIs. Adding Tulowitzki’s bat to the Mets’ lineup would be a difference-maker for general manager Sandy Alderson. Sounds like a player who wouldn’t mind playing behind such a staff. As for fellow All-Star Mets right-hander Jacob deGrom, Tulowitzki said: “Every time he takes the mound, you know he has the potential to throw a gem and go the distance. This is the first time I’ve gotten to talk to him and he seems like a stud of an individual. “He’s impressive and an impressive athlete, I wish him the best and he is going to have a great career.’’

Read between the lines, folks. Interpolate. Extrapolate. The message behind the message. The words behind the words. Mets Pitching is phenomenal > Pitching Wins > Tulo Wants to win = Tulo Wants To Be A Met. Who wouldnt want to play for this pitching staff? I was trying to not drink the Kool Aid as much as other Mets fans have been. So many Mets fans out there act like the Mets are World Series contenders this season. Which is just crazy. They quite literally have the worst lineup in baseball. They are BOTTOM THREE in runs scored. Right next to the Phillies who are gonna lose like 150 games this year.

But yet here they are, 2 games out. This pitching is so good, even better than all the dick riding Mets fans even believe. So now even I’m starting to buy into the craziness. Not the crazy talk like the Mets are contenders right now, this year. But the talk that they are really truly not that far away.

This team is 33-5 when they score for runs. Let all those numbers sink in. THIRTY THREE AND FIVE. When they score FOUR runs. Thats not some asinine stat like the team is “57-2 when they score 9 or more runs.” Those kind of stats apply to basically every team in the league when you talk about scoring that many runs. But this team playing like .860 ball every time they push just four guys across the plate?? Thats INSANE. There are franchises that wont even do Free Papa Johns giveaways for four runs. Only scoring 4 a game would still be a pretty shitty offense and this team would win like a hundred fucking games. Its bananas.

I’m not sitting here and just extrapolating that over the course of 162 games and telling you the Mets will break records with their win totals, I’m just saying that the next free agent bat or two have gotta be thinking they can be the real difference maker. If Tulo comes here and makes this offense just mediocre, they are a contender. That 33-5 stat is enough to get me to say “I’m the guy that can put this offense and this team over he top.” It used to feel like they needed to fill a million holes on offense, and technically they do. But according to the numbers it aint as bad as it seems. For fucks sake go get me Tulo at short and J Up in right. Call up Conforto in left. No single one of those guys is the answer to creating a juggernaut offense., but thats not what we’re looking fore. We’re looking to just score just 4+ runs a game and let the pitching do the rest. Gotta give up something to get something, but looking at some of these figures and looking at the ages on these pitchers, its gotta be now.

Cmon Tulo. Make it happen. Express some interest. Force your hand. I know you’re a Stoolie. I know you like New York. I know you can get these other clowns to score 4 a game. Lets fucking do this and stop wasting everyone’s time. Win a World Series and make everyone happy.

PS – Yes I realize literally NONE of this will happen, no moves will be made, the Mets will toil away in mediocrity for the next few years until these pitchers begin to leave and we’ll dwindle back to shit. But it makes it even more painful to see that all we need is 4 runs here and there and they’d probably win the NL East.