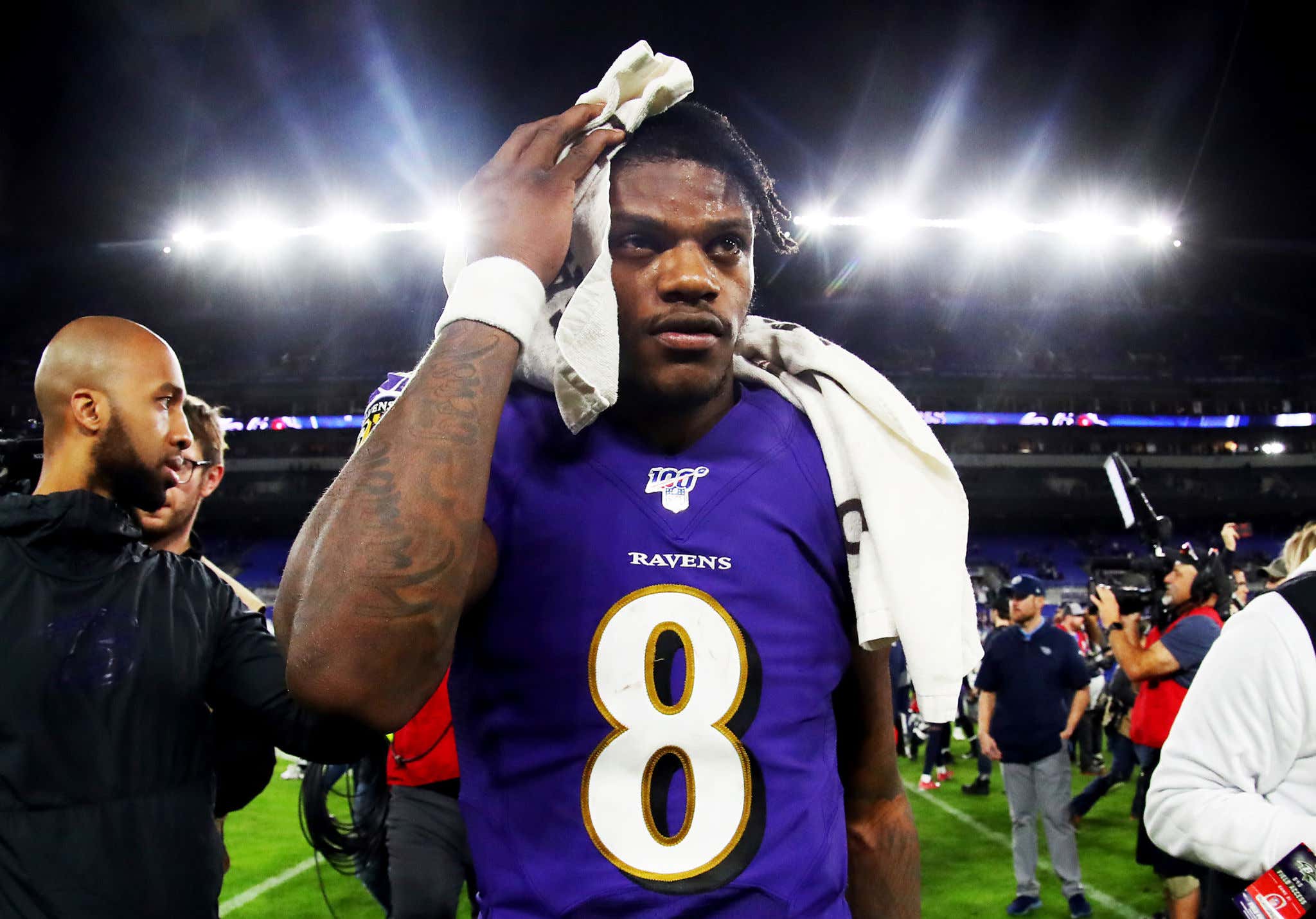 We've all heard the narrative. It's all us folks in Baltimore have heard all year. After Lamar silenced the doubters who said he couldn't throw on his way to winning the MVP, the haters couldn't wait to jump down his throat as soon as he and his Ravens dropped a dud last year against the Titans. Make no mistake about it, the loss was a failure. It shouldn't have fallen squarely on his shoulders (the guy accounted for 508 yards of offense for chrissakes) in the way that it did, but such is the deal when you're an NFL QB. I understand that fully.

It's the word "can't" that irks me. Lamar Jackson has played in two playoff games and has lost them both. Those are facts. But let's put that in some context.

To start, let's talk about that first loss. Lamar Jackson took over the 2018 Ravens at the bye week at 4-5 after Joe Flacco injured his back. The team constructed a playbook on the fly catered to Lamar's strengths. Given the team's record, essentially every single game Lamar played that November and December was a pressure-packed must win game. What did he do? He won 6 out of 7 to steal the AFC North division title. Not to mention in that one loss he essentially had the Chiefs beat until his his defense let him down on 4th and 9. His reward for winning the division was becoming the youngest QB to ever start a playoff game. We know how that game went. Given that the Ravens were playing with house money just by way of Lamar getting us to that game, we can live with it. The fact that this loss is used against him is, to say the least, short-sighted.

Year 2 was obviously a dream regular season. Lamar was the league's 2nd ever unanimous MVP and 12 straight wins (including 5 against playoff teams) heading into the postseason had them as heavy favorites to win it all. The Titans came to Baltimore and executed to perfection. The Ravens did not. So many things they excelled at during their record-setting regular season went out the window. The 2019 Ravens had the fewest dropped passes of any team in the league with 14. In that one playoff game alone they had 7. In the regular season they converted more 4th downs than any team in football. Against the Titans they were 1 of 4, including two failed 4th and 1's. Those are literally the only two failed 4th and 1's Lamar has ever had in his NFL career. Since 2000 there have been 341 games in which a team has gained 500+ yards. Only once has a team scored less than the Ravens' 12 points in a game where they gained 500+. It took a perfect storm of wildly uncharacteristic play and bad timing to lose that game. Nonetheless, it was a failure. They fucked up. Criticism where criticism is due.

Back to my point. "Can't" and "hasn't" are two very different things. Lamar Jackson turned 24 years old on Thursday. Numerous great QB's hadn't even MADE the playoffs at that age, let alone won a playoff game. I can assure you none of them were slapped with the loser label as quickly or as loudly as Lamar Jackson has. It really is a classic case of a guy being the victim of his own successes. Obviously I'd be lying if I said it doesn't bug me because the evidence is right here on this blog. I'm 616 words into a rant about it.

This year hasn't been sunshine and daisies like it was last year. The Ravens clearly went through some identity issues in the middle of this season where at times Lamar looked like he was trying to be somebody else's idea of a quarterback. Yes, there were still the designed runs and options where he would do damage with his legs, but from the pocket he was playing rigid and indecisive. He and the Ravens ran into the road-block that was COVID-19, which cost them a shot at the division and put them into must-win mode all of December. But it also presented Lamar with a chance to take a look in the mirror and get back to what he does best. He's played instinctive, he's played fast, and he's been damn near perfect in these 5 games that got the Ravens to the postseason. He's looked every part the MVP that he was in 2019, and that's why we're here.

Which brings us to today. Today brings us a crossroads in this so-called narrative. Lamar Jackson has the opportunity to squash it like a bug. That's not at all to say that the haters will relent after just one playoff win, but it removes the weakest and laziest crutch those guys have. What the Ravens did during this regular season was never going to matter. After the failure last year Lamar was always going to be judged by how they performed come playoff time. They just had to make sure they made the dance. Things looked a weeeee bit shaky there for a bit, but they accomplished that. Now it's time to silence the doubters. If the Ravens lose, a ton of fuel will be thrown on that fire, and there won't be anything anyone can do to stop it. The pattern will be undeniable. 2 losses do not make a trend. Three do. But I have the utmost confidence that Lamar is going to rise to the occasion today just like he has the past month. Just like he did after the bye in 2018. Just like in 2019 when he beat the fucking brakes off of 5 playoff teams. Lamar has always been able to handle the pressure. If you disagree, you just haven't been paying attention. So say it with me now because today's the last chance you'll get.

"Lamar Jackson hasn't won in the playoffs. Yet." 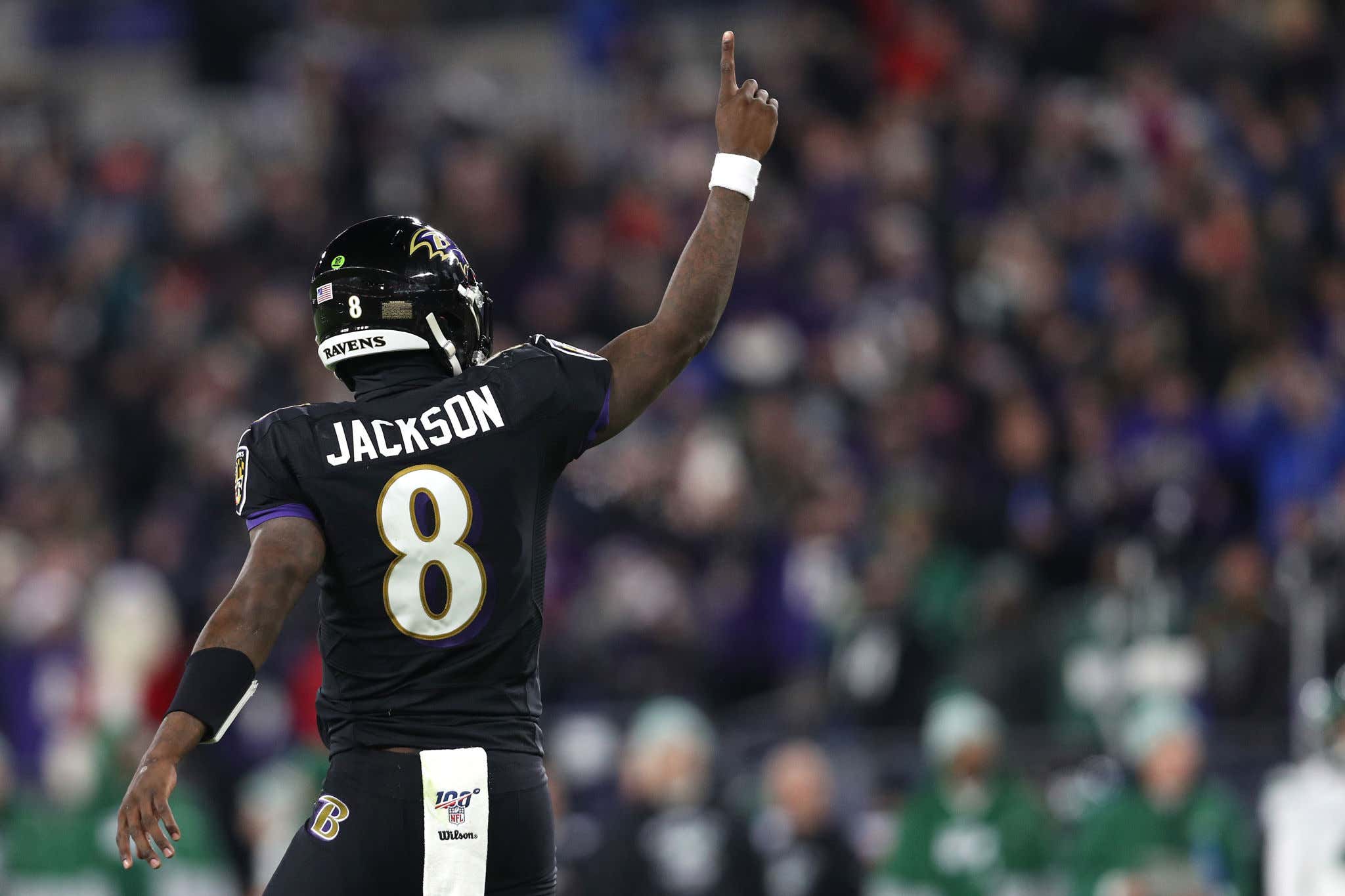