I know the Hawks are off to a pretty good start this season, but there's something going on here with John Collins. Just look at what the team has done dating back to last season. First, they traded for Clint Capela. Then at the draft they took rookie big man Oneyka Okongwu. Then they signed Danilo Gallinari to a big contract in the offseason. Then despite being a young big man who is putting up 20/10 on efficient splits, the Hawks decided to NOT give John Collins a rookie extension. That doesn't mean he's gone for good, but rather he becomes a RFA. But when you spend the money they have at his position and then choose to not extend him, it's only a matter of time before reports like this come out.

The numbers maybe show you why Collins might be unhappy. He's playing fewer minutes, taking fewer shots, and scoring less than he did last season despite his 8 starts. There's only one problem here. You can't be taking shots at the franchise if you're Collins. Trae is THE GUY, you are not. If you have a problem playing with Trae, he's not the one that changes. The Hawks currently have a top 10 offense at the moment too so I'm not sure why Collins has issue other than his own personal numbers are going down.

So, if he suddenly wants out, you know what that means! 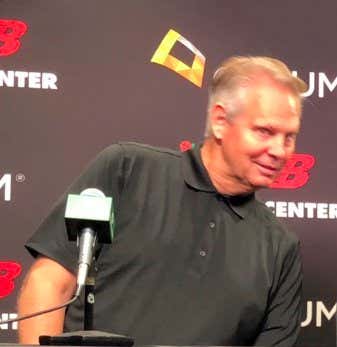 Since Collins didn't get an extension, his salary is only $4M. That currently fits into the Enes Kanter TPE that Ainge got when he was traded to POR. He technically wouldn't even have to touch the Hayward TPE to make a move like this.

I'm sorry to be the bearer of bad news for any hopeful Celts fans out there, but don't even waste your time with this.

Why? Well it's pretty simple. What exactly is Ainge going to give up that the Hawks would want? Remember, they can always just match whatever offer Collins gets in RFA. They don't have to move him, he's not at risk of leaving for nothing. They also don't have extra first round picks to send back either. All signs point to them picking in the lower third of the draft next year. You're not going to get John Collins for like Grant or Theis/Semi and picks. No chance. You're also probably not going to see Ainge trade someone like Marcus Smart for Collins, and even if he wanted to that money doesn't work. The Hawks would have to send back like $8M to make that work. Maybe a Rondo reunion? Would that be fucking wild.

So I hate to burst your bubble, but it's important to be realistic when it comes to finding names that Ainge could add to this roster. I just can't see a way John Collins is that guy, as much as he would be a perfect fit. To me this has the feel of something we hear Ainge was "in on" but actually never was and it doesn't happen and then Twitter crucifies him for it. But if you take a second and actually look at what Ainge could offer that the Hawks would want, you'll see that barring something crazy or a third team, there's not really a path.

Is this entire blog simply a reverse jinx attempt so that it actually will somehow happen??