This week on IWYIM, I am going to highlight a sandwich that you should write down. 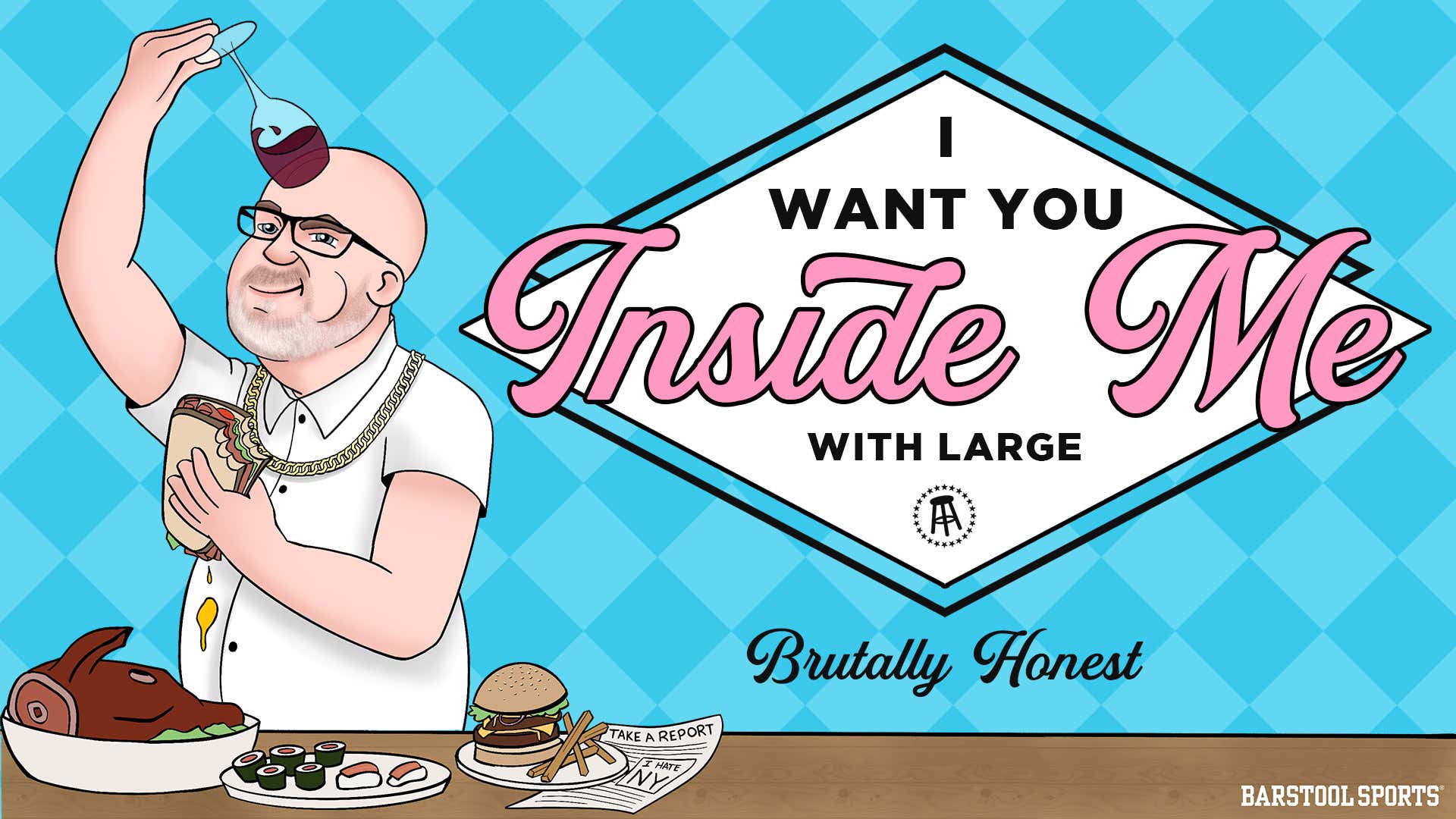 I mentioned this before… I don't necessarily like Guy Fieri… But whenever I watch his show, I always have the NOTES application open on my phone in order to jot down the name of either a diner, drive-in, or dive that he is at just so I can potentially visit that place next time I am anywhere near Flavortown.

If you look at the list I have amassed over the years, I have only tried a small handful of the places I have taken note of and I often find myself adding places to the list that I know I will never visit… It just feels good to know they exist, I suppose.

This sandwich is for people who keep similar lists.

It's the Roast Beef Special from Fiore's House Of Quality in scenic Hoboken, New Jersey. 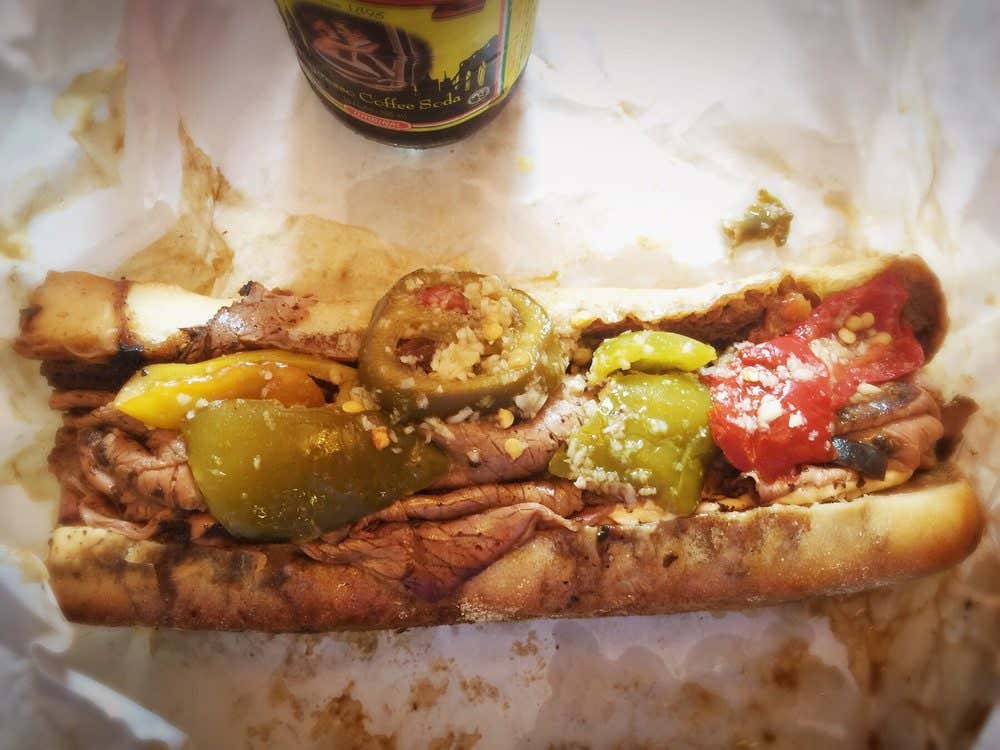 Here’s the thing with joints like this… And by “joints like this”, I mean an established ethnic place that is filled with employees that sound and act like characters from a movie.

So… Again… Here’s the thing with joints like this… You have to know how to order, and questioning your own ability to order correctly can cause some anxiety.

Some places in Philly are sticklers for the proper cheesesteak ordering language ("One whiz without."), and if you fumble your request at The Weiner’s Circle in Chicago you can either get an unwelcome tongue-lashing or an even more unwelcome tit flashing.

The same holds true for Fiore’s (without the potential of full-frontal).

And, if you think I am lying, then pay attention to the more touristy “virgins” in line with you on a sunny-and-mild Thursday afternoon… Fucking idiots are mumbling “Roast beef and mutz with gravy and hot peppers on the side” under their breath like Luca Brazi nervously practicing his wedding toast.

But the pandemic has made it a tad easier… Pre-Covid, you would actually grab your bread from a basket on the right just as you entered the store and bring it up to the counter with instructions on how the gents should fill it.  But now that same bread is allegedly germ-free on the other side of the counter, so your ordering just got even simpler.

By the way… That bread is baked fresh at either Dom’s Bakery in Hoboken or Amato’s Bakery in North Bergen, but I don't claim to have enough of a carb-palate to know which loaf is which… I just know ALL the bread at Fiore's is extraordinary.

Like most people, I only go on either a Thursday or Saturday and order a full roast beef with fresh mozzarella, hot peppers, and gravy… And because I am a gentleman, I order a container of gravy on the side as well to dip my sandwich into AND to also do gout-inducing shots of.

You can order a half if you'd like, but I think life is too short to order half-sandwiches (others will probably argue that my life expectancy becomes less long every time I order a full sandwich, but that is not the point here).

On top of the sandwiches, I always order a ball of fresh mozzarella, a container of ricotta cheese, and a couple loaves of Italian bread for the house.  And since Hoboken is a 30-minute drive from my home, I always get a simple-and-more-rustic hero for the car… Usually a full loaf with just mutz, hot peppers, and a drizzle of olive oil… Nothing that will spill out onto my shirt as I tear into that sonofabitch while I take my glasses off, lose 40 pounds, and drive my 2007 Dodge Durango with my knees holding my pet monkey.

This last time I went to Fiore's, however, my order was a little different.

Instead of going home to eat, I decided to give my old friend Captain Cons a call (since he is less than a half-mile from Fiore's) and asked him if he was hungry.

Cons was thrilled at the notion of breaking bread with an old friend (plus I was buying), so he invited me over to eat… Which meant I would be having one of my favorite sandwiches at a nearby table for the first time ever.

10:45 AM on a Thursday and there were only 2 jerkoffs ahead of me in line and another 4 people waiting inside the store… 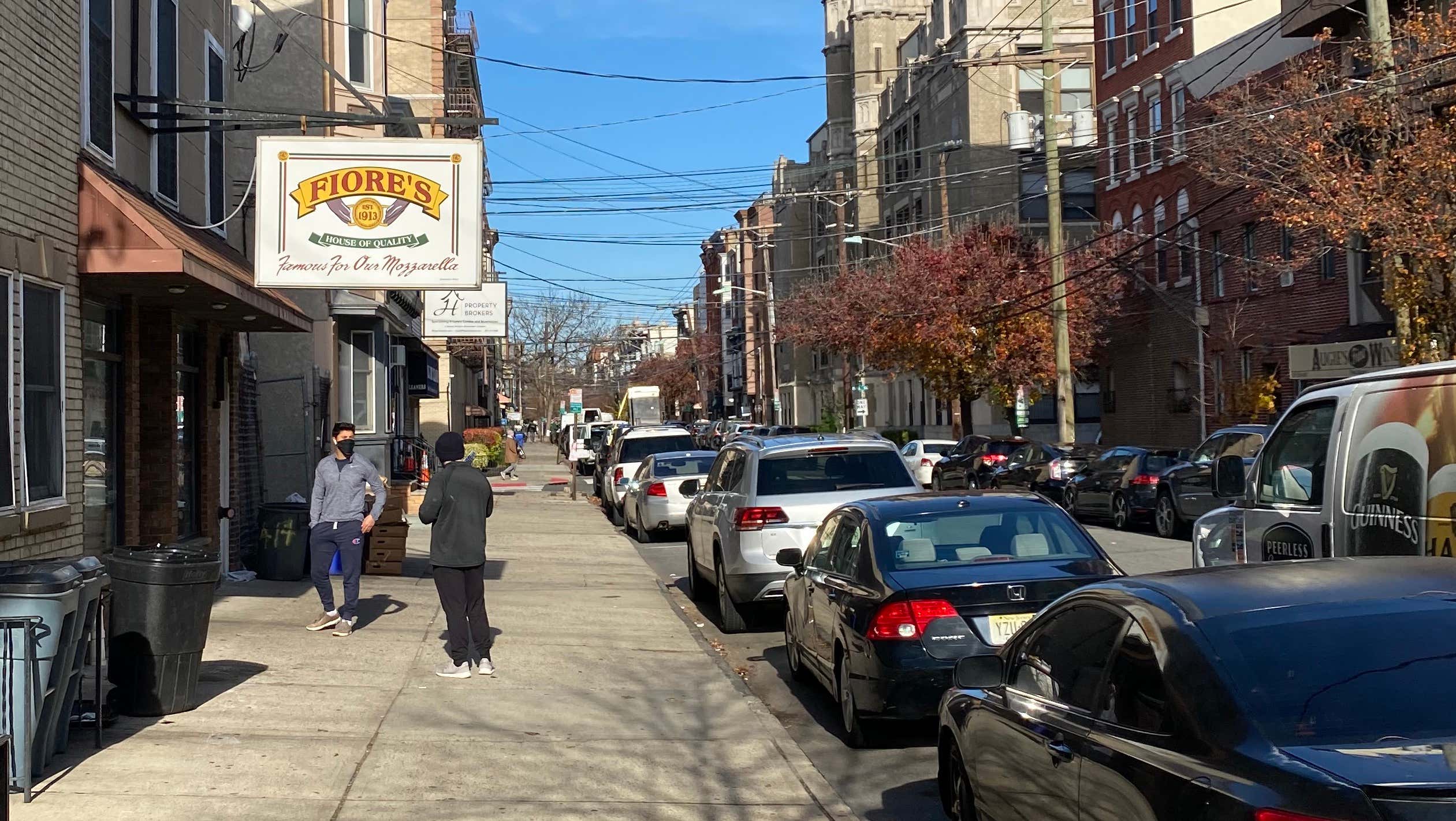 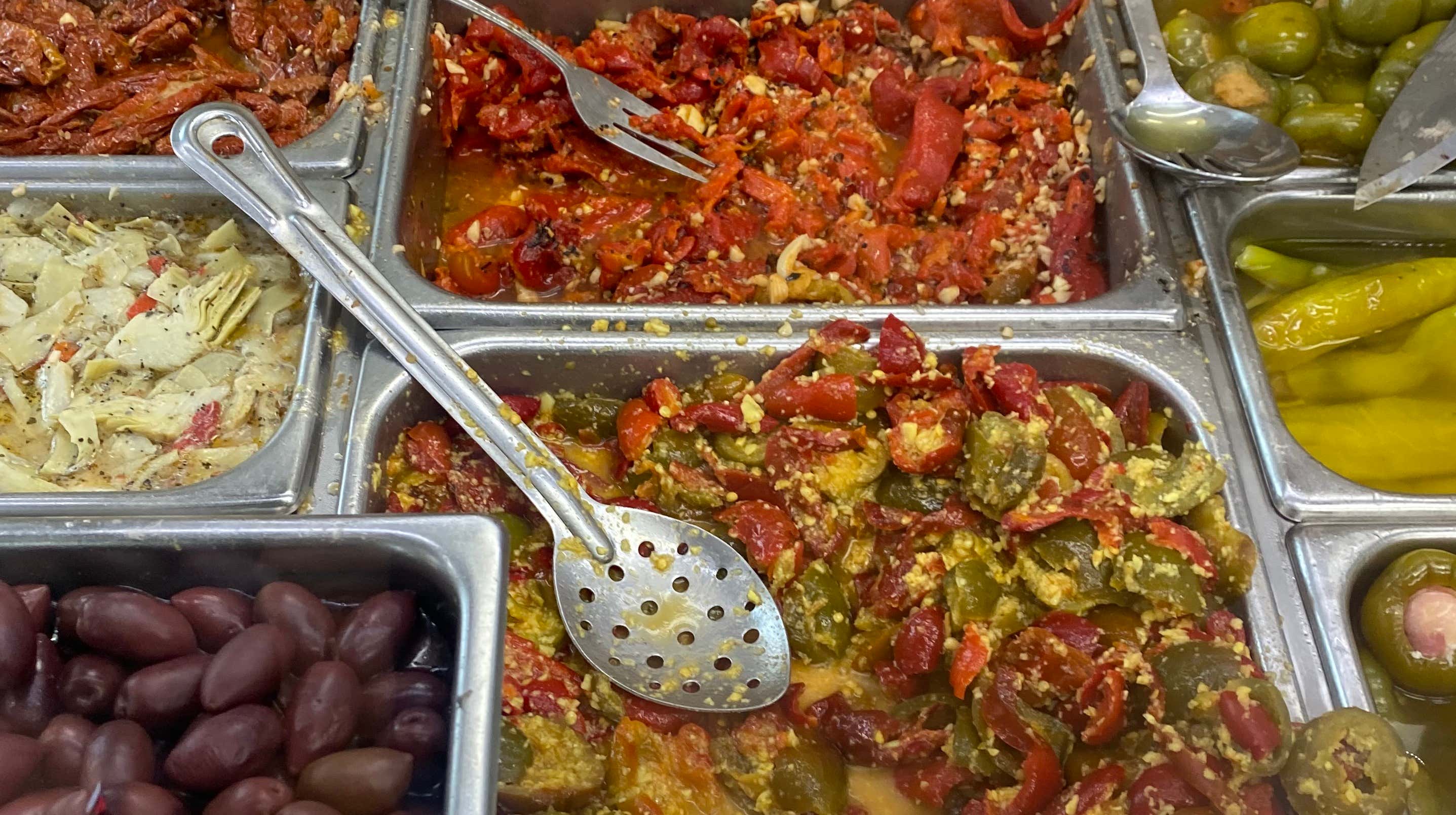 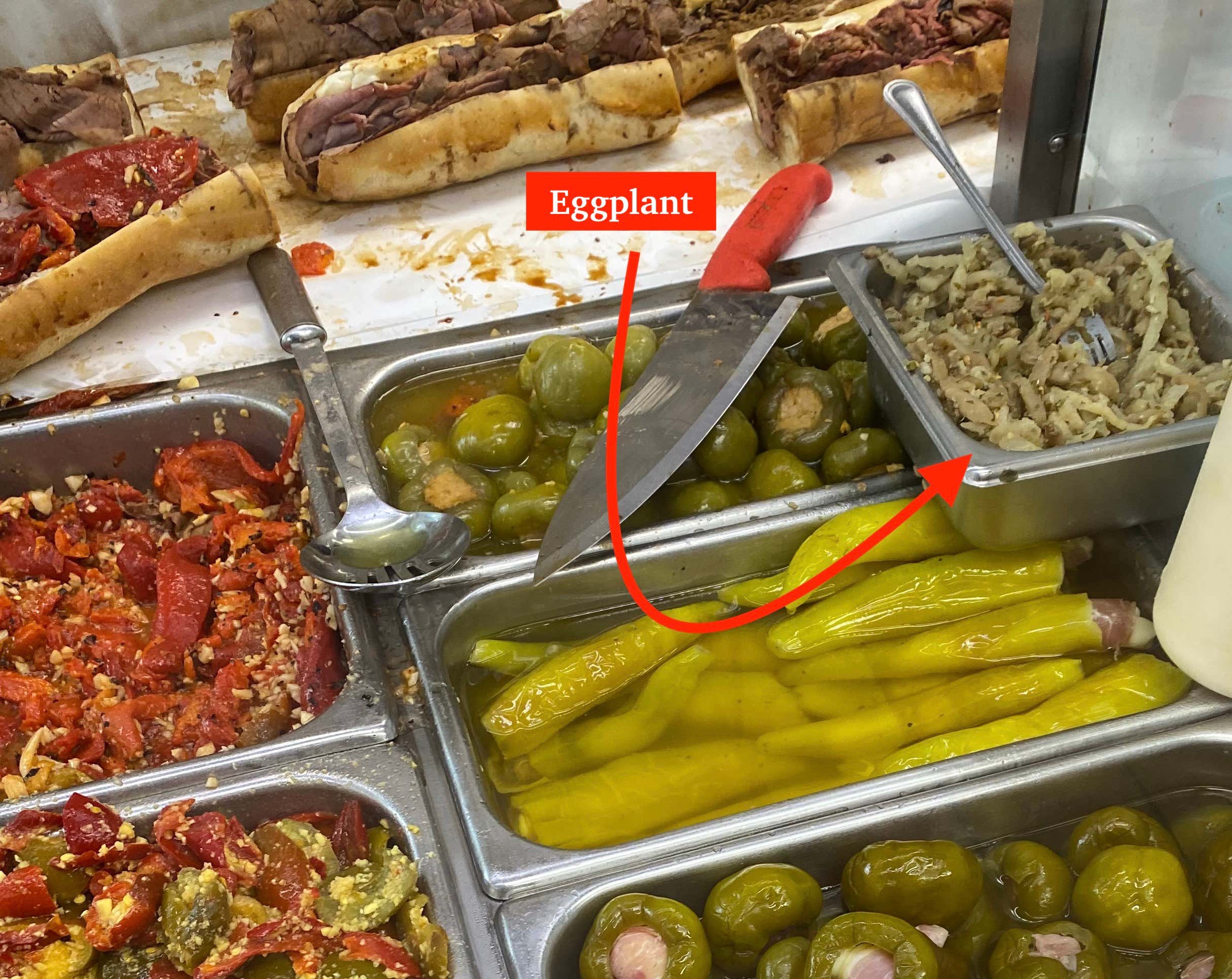 I always get a side of the octopus salad… 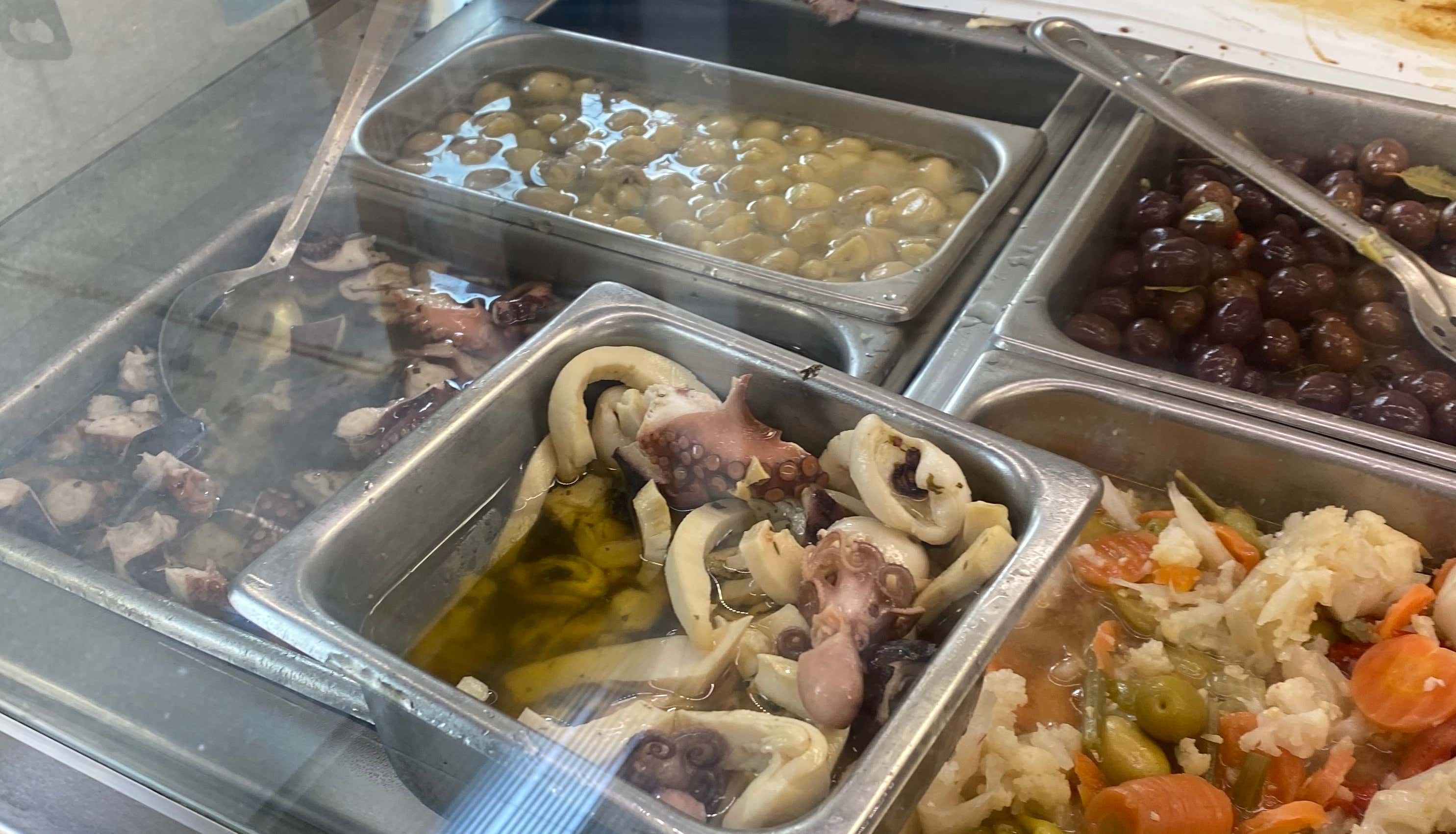 I can get olives and marinated mushrooms anywhere, but the pulpo here is always very fresh.

I told the guy making my sandwiches that Annie was waiting outside in the car, and, without me asking, he hands me a paper towel with this in it and said, "This should shut her up… Run this out to the car for her, Big Guy."… Which was equal parts insulting and beautiful, and I quickly obliged. 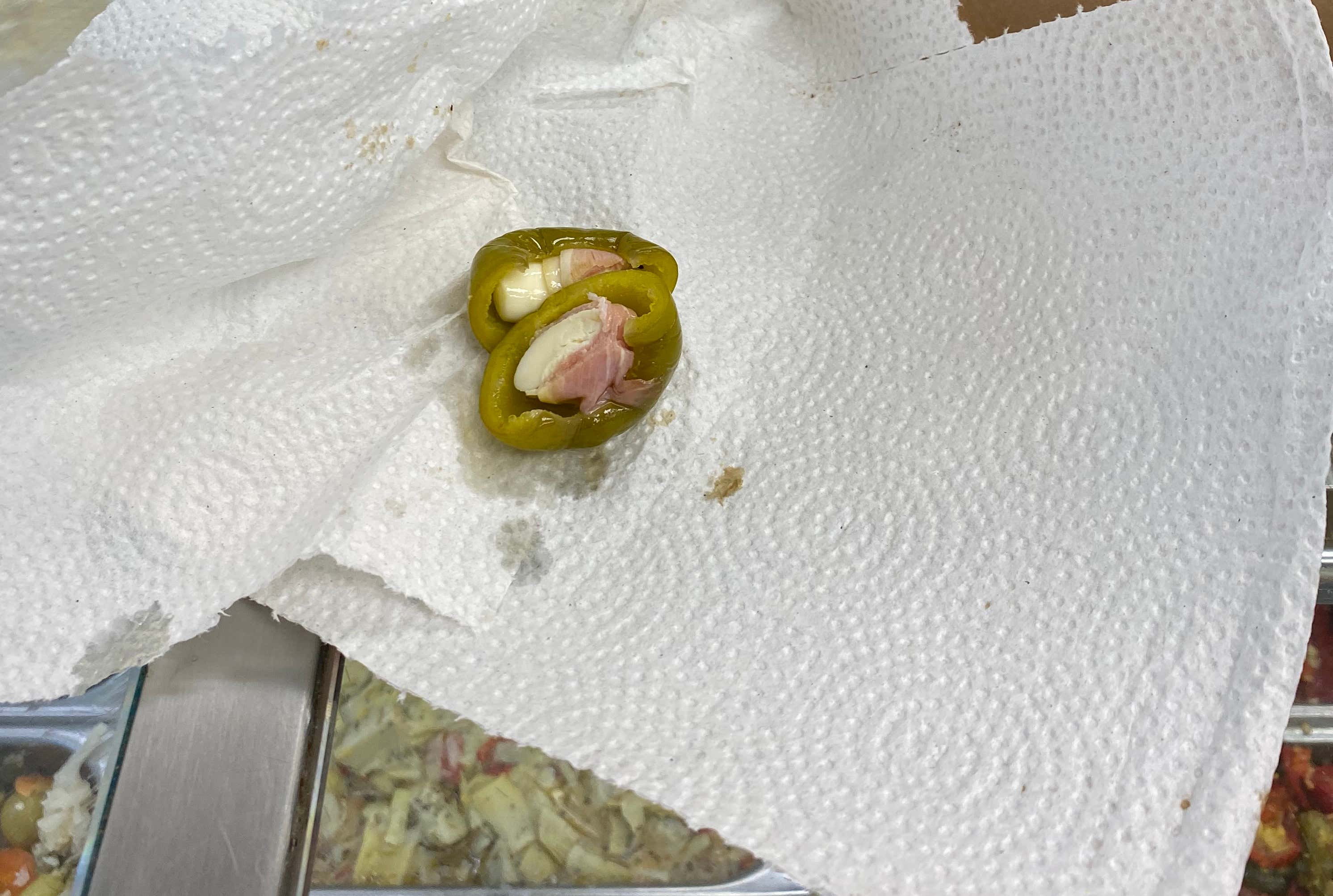 I handed that bitch a stuffed pepper through the driver's side window and she did exactly what the guy said… She shut-the-fuck-up and ate it. 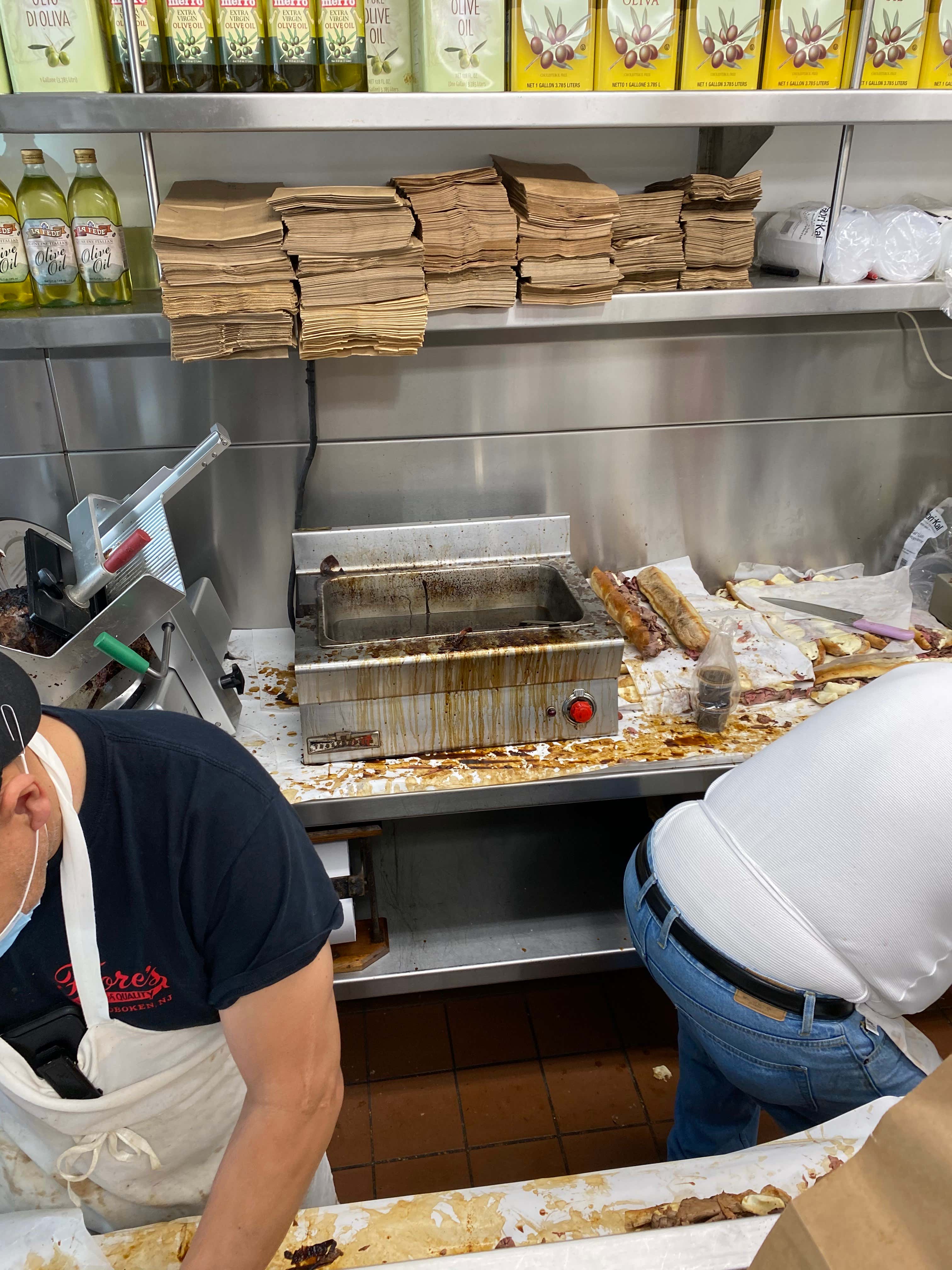 How fucking gorgeous is this?

Just blood and gravy everywhere and the gentlemen crouched down on the right has the decency to not expose his ass-crack like some filthy animal while the artist on the left has a visible scar on his muscular left arm… No doubt from a horrific deli-slicer accident that befell him when he was just learning the craft.

And foodies will be quick to point out that the "gravy" I keep mentioning is more of a "jus" because it is not thickened with flour or some cornstarch slurry, but I still call it gravy because that is what the boys at Fiore's call it… I have nothing against jus. 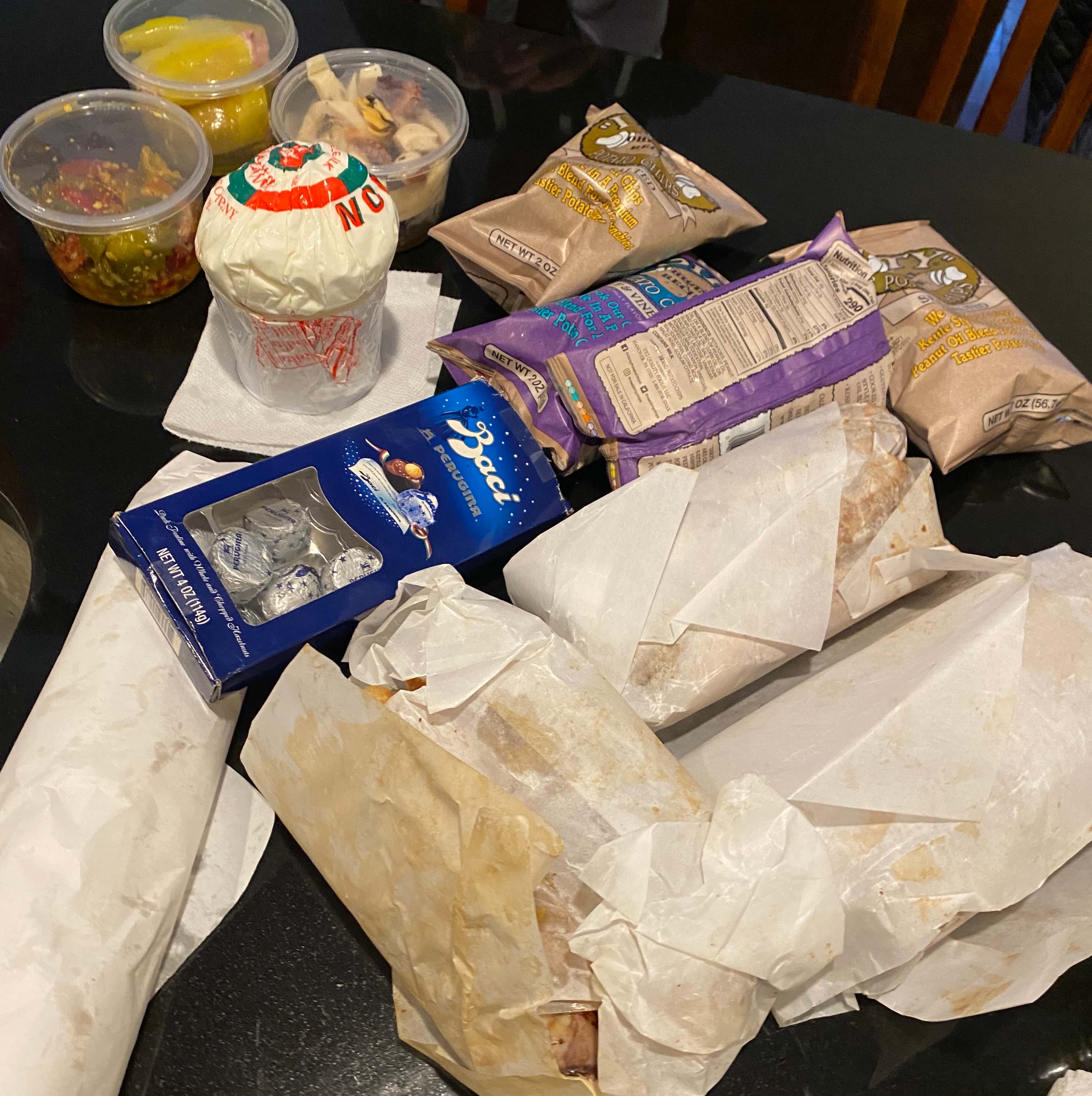 Four heroes (2 "wit" hot peppers), 4 bags of chips, a side of pulpo, some stuffed banana peppers, some hot peppers, 2 small containers of gravy (not pictured), a loaf of Italian, a container of ricotta, and a package of dark chocolates… All that was for 3 people and it was WAAAAY too much.  So if you go there with 2 friends, I recommend you order EXACTLY what I did because…

Now… maybe you have questions:

Is this sandwich better than a pit beef from Chaps in Baltimore smothered in their Tiger Sauce?

Is it better than a beef-on-weck from Schwabl's in Buffalo engulfed in grated horseradish?

Is it better than any Italian Beef from Chicago covered in giardiniera from my good friends at JP Graziano's?

I have no fucking idea.

But it is a very, very, VERY good sandwich.

And can you order something else?… Of course, you can.

If you don't like roast beef, you won't like this sandwich. I have a friend who says he doesn't eat roast beef because it reminds him of his ex-wife, but I think he's just trying to be funny.

But Fiore's is a fully stocked Italian deli and "latticini" (which I think translates from Italian to "dairy product", but I always took to mean "cheese maker") that also offers specials every day they are open…

Friday - Tuna (because they are Cat-lick)

(I have never had the tuna or the Virginia Ham, but everything else is very good.)

Here are a couple of other things to keep in mind, if you do make your way over to Fiore's…

- Their hours of operation are 8 AM - 6 PM, and if you decide to casually show up at a noon or 5, be prepared to wait in a line.

- Hoboken is littered with thin roads filled with double-parked and illegally-parked cars, but Fiore's does have limited parking on the far end of their storefront… For some reason, I have never actually pulled into this lot, opting instead to block part of the street with my enormous SUV, but I felt mentioning the available legal spaces was worthwhile.

- Fiore’s is CASH ONLY because Cat-licks hate taxes.

- If you do get some fresh mozzarella to-go, please eat it ASAP if you want to appreciate the "fresh" aspect of fresh mozzarella.  And if you won't be getting to it for a couple of hours, still DO NOT store it in your fridge.  Once fresh mozzarella gets too far above room temp, it starts to tighten up, and it defeats the purpose of going to a great cheesemaker… You coulda saved yourself a couple of bucks and some gas and just got a block of Polly-O from ShopRite. 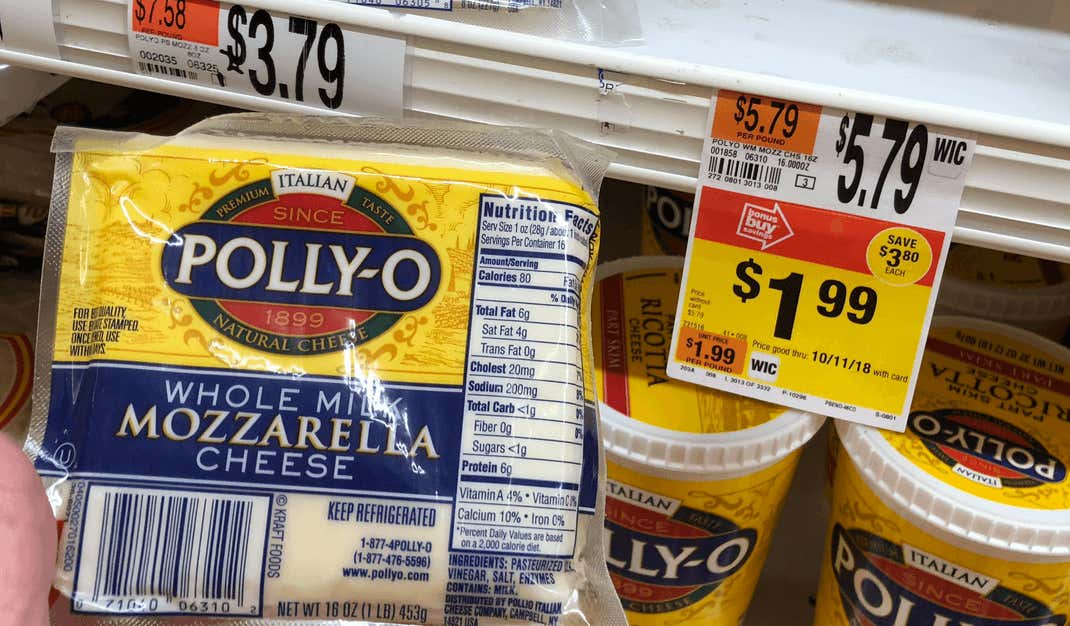 And finally, like with anything else, there’s always a downside to having an iconic sandwich like this… Everything that makes you feel like shit is contained within.

Too much roast beef will give you the “meat sweats”.  Too much cheese makes you (or at least me) swell up like a tick.  Too much garlic makes you fragrant.

I have often asked my bride to go places that she arguably shouldn’t have been, but having a loved one’s mouth or nose anywhere near your undercarriage in the wake of this culinary masterpiece is cruel and unusual punishment.

I burped in my car on the way home after lunch and the inside of my full-size extended-cab SUV smelled like Paul Sorvino’s* taint… Can you imagine what my sweat-soaked grundle smelled like?

And if Paul Sorvino has passed away, then just know I was totally unaware… Potential apologies and condolences to Mira and the Sorvino family, and please insert any other overweight Italian before the word “taint” in the sentence above if Paul is no longer with us.

So, if you’re ever near Hoboken on either a Thursday or Saturday, carve out some time, bring cash, or, at the very least, add Fiore’s to your Flavortown list.

I had offered to make cheese at Russo and Sons last week with whoever was willing to pay, and within an hour, I had some lucky bastard pledge just over 4 grand to The Barstool Fund for the opportunity to eat and drink with me for a couple of hours in Brooklyn… Many thanks to everyone who bid lower, and I hope to offer other charity-based eating experiences in the future.