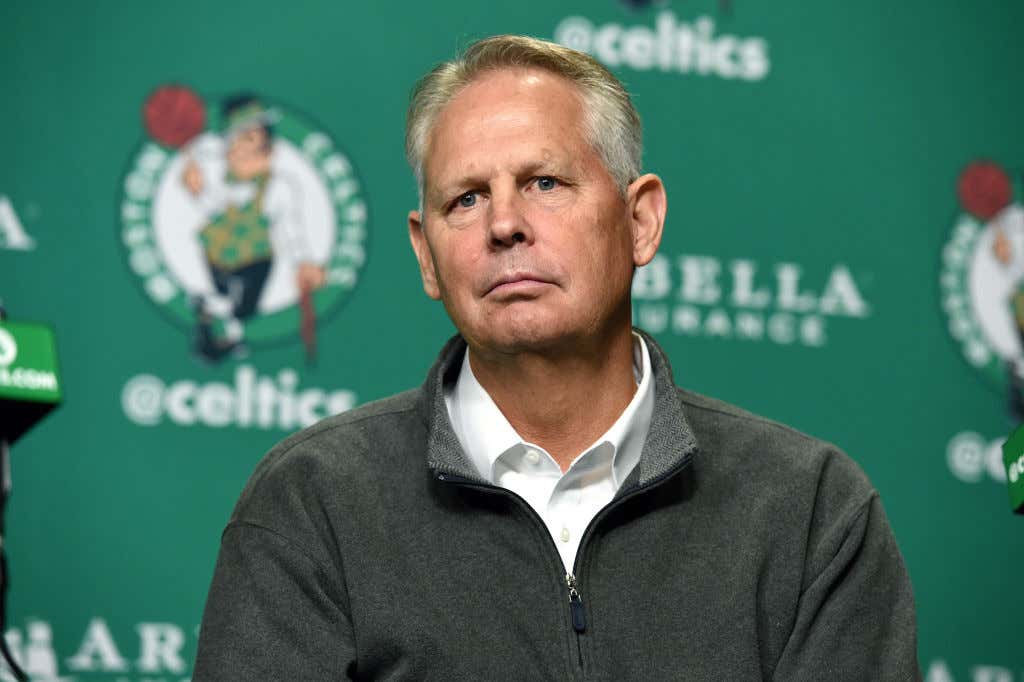 One of the bigger storylines for the Celts this season is what the hell Danny Ainge is going to do with the TPE that he got from Charlotte in the Gordon Hayward fiasco. It's basically the one thing that will determine if Ainge fucked that whole situation up or if his decision to not take the Myles Turner trade was actually smart. Remember, it's Tristan Thompson + whatever he does with the TPE that will determine everything.

Now I dunno about you, but trying to understand all the cap scenarios and how much they can actually spend is confusing as fuck. The CBA is maybe the most confusing document in the history of documents. I'm more of a "tell me how much he can spend and I'll give you names" type of guy. Well thankfully there are smart people on Twitter who understand the CBA and all the different factors and we finally have a clear explanation. Thank you Keith Smart you wonderful man

The first decision Ainge has to make is if he uses part of this TPE during the season or just wait until the offseason to use the whole thing. I change my mind on what I want Ainge to do pretty much every day. I'm all for swinging big and waiting until the offseason, but at the same time I'm all for using part of it during the season to address glaring needs at the trade deadline. So let's pretend he's actually going to have the balls to make a deadline deal now that he technically doesn't have to trade a major rotation piece to absord the salary of an incoming player. Who could even be out there that might fit under the $19M number? Remember, it doesn't have to be one player. You can add as many as you want under that $19M, you just have to address the roster spot situation.

So I went around looking at some salaries both big and small to get some names that you should have on your radar. It's important to remember you're most likely not going to get some All Star talent at the deadline. This is more, what kinda old/maybe on the decline but are still serviceable veterans are available that will help address a need. Here's what I was thinking

At 33 years old and an expiring deal, who knows if the Jazz plan to keep Ingles around after this season. His name doesn't blow your dick off but he's a 6'7 SF/PF who is around a 10/3/5 player. Last year he shot 44/39% with 2.0 3PM and this year he's putting up 9.1/4.3/3.4 on 47/32% with 1.4 3PM. He's a player that I feel like would have no problem sliding into Brad's system, and he's already coming off the bench so he'll be able to handle that role. I'm intriguied by his playmaking and outside shooting, the only downside is he historically disappears in the playoffs. For whatever reason, his ability to hit shots disappears.

I'll admit, I thought about this for 15 seconds while watching Gay put up 16/6 off the bench for the Spurs last night. He's 34, he's a fraction of what he once was, but could he be the bench wing depth that this team needs? He's someone that has the ability to randomly show life on the offensive end, and since the Spurs are heading towards a rebuild I bet he could be had.

The shooting scares me a little bit, he's only shot better than 33% from three once in the last 4 years. But he is putting up 12.7/4.9 to start the year and again it's not like the Celts bench can be picky when it comes to scoring options

If the Magic are going to actually be good, Fournier probably isn't available. He's only 27 so I see no reason why the Magic wouldn't want to keep him moving forward, but if the come back down to earth and are looking like they're headed for the lottery by the trade deadline, maybe they entertain the idea of flipping that expiring asset. I'm not sure he'd be down to come off the bench, but if Brad ever decides to go back to the one big lineup, there could be a spot to start him once Kemba is back. He's off to a good start shooting 51% from the floor and he has good size at 6'7.

I'm only putting Redick here because I will not rest until I speak this into existence. He's off to a brutal start this year averaging just 6 points on 27/25% shooting, so maybe the Pelicans would be ready to move on from him, especially if they are out of it by the deadline. It's a pipedream, but I don't think I have to explain how perfect he would be for this roster.

If the Rockets do end up trading Harden, it's only a matter of time before Tucker is on the table. For that price and what he brings as a 3 and D guy? Sign me up. Let him mentor Grant into becoming PJ Tucker 2.0. It won't cost much to get him since he's already 36 and he brings the toughness that this team could always use.

You never know what the Kings are going to do. They don't have great big man depth but it's also the Kings so there's a chance you can take advantage of them having no idea what they're doing. Bjelica is a low cost option that can stretch the floor and make threes as a four. Richaun Holmes is also an expiring, but he starts and actually shows promise so I don't think he'd be available. I also wouldn't totally rule our Marvin Bagley given everything going on with him and SAC, but Bjelica is probably the one most available.

Does anyone have any idea what OKC is doing with Ariza? They aren't playing him which tells me Sam Presti is going to be looking to flip him at the deadline. Guy loves draft picks so I don't see why a second round pick wouldn't work. He's old, but he's a veteran wing that the bench could certainly use. He's won a ring, he's had moments in the playoffs, and he shot 40% from three in 21 games in POR last year.

These are just guys that are on expiring deals, but you never know what will actually be available come the deadline. Maybe if Ainge includes a player under contract they're able to bring in someone with multiple years left. The point is, it's better if you spend less time dreaming up unrealistic options and more time looking at the actual names that are available. There's a chance Ainge doesn't like any of these options and decides to wait until the offseason when he can use the whole thing and bring in multiple players that way. It all just depends on how this team looks and what their glaring needs are by the deadline. Right now, that's wing depth for me. They need some reliable players at that position right now, unless what we are seeing from Semi is truly who he is going to be this year, but I'm skeptical.

What absolutely cannot happen is that Ainge sits on this TPE and it expires. That would be a colossal failure and pretty inexcusable because there are roster spots that are certainly up for grabs right now.