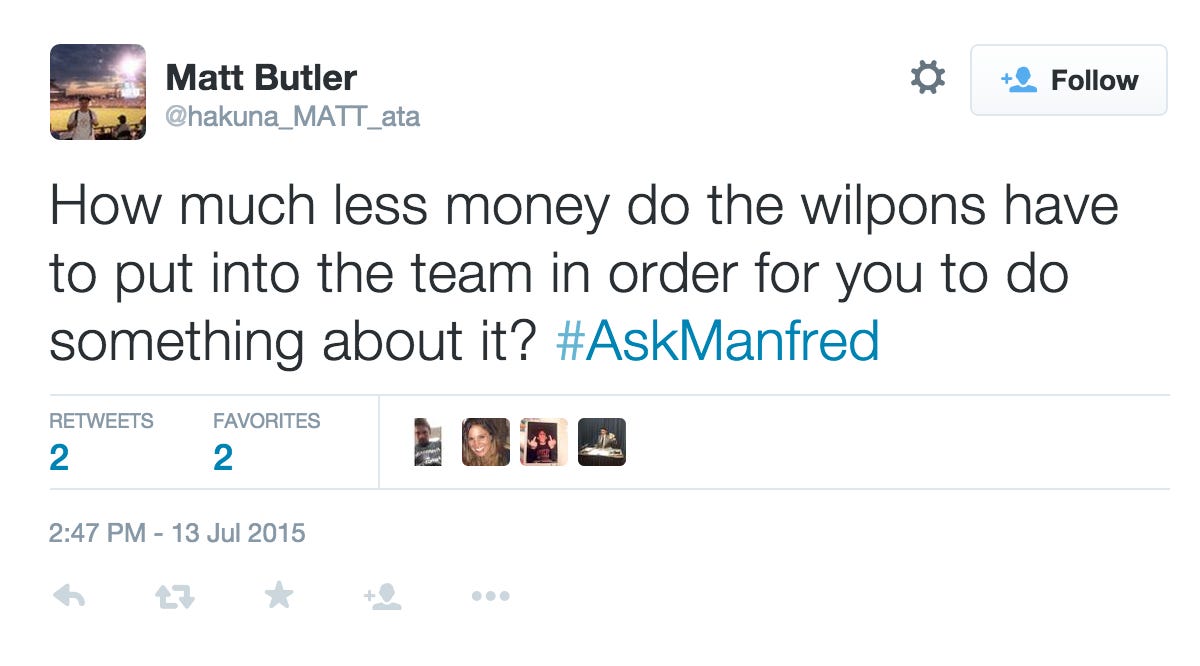 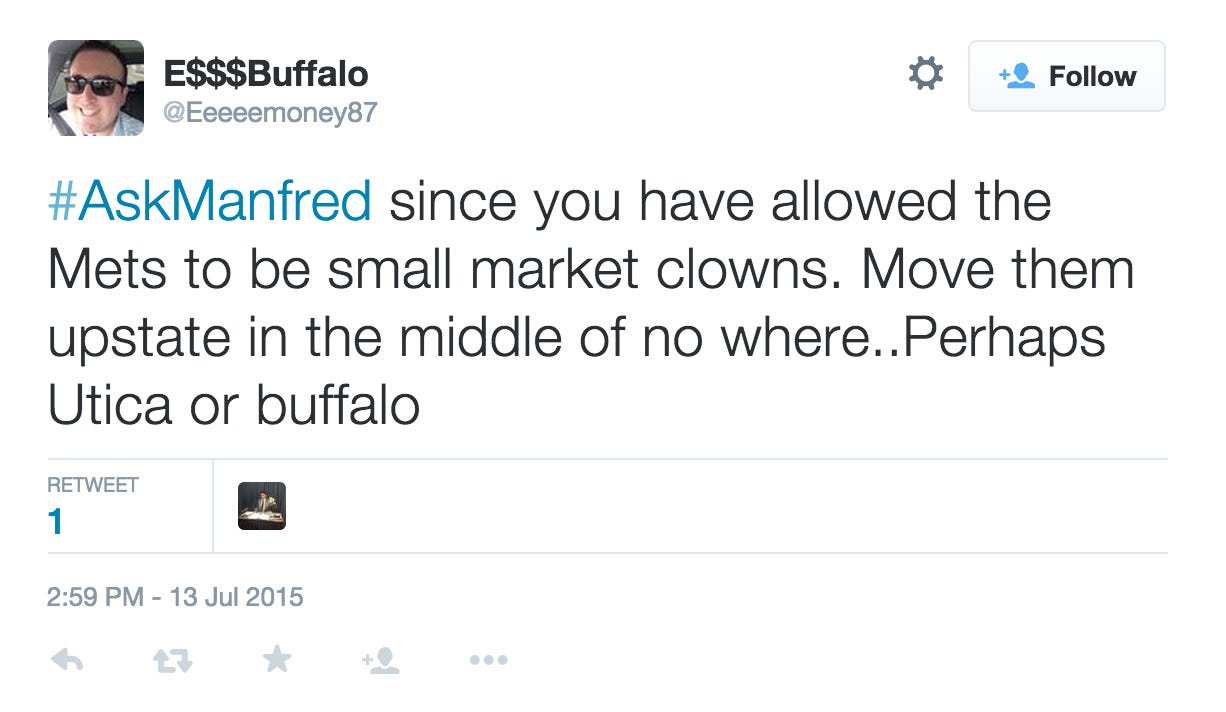 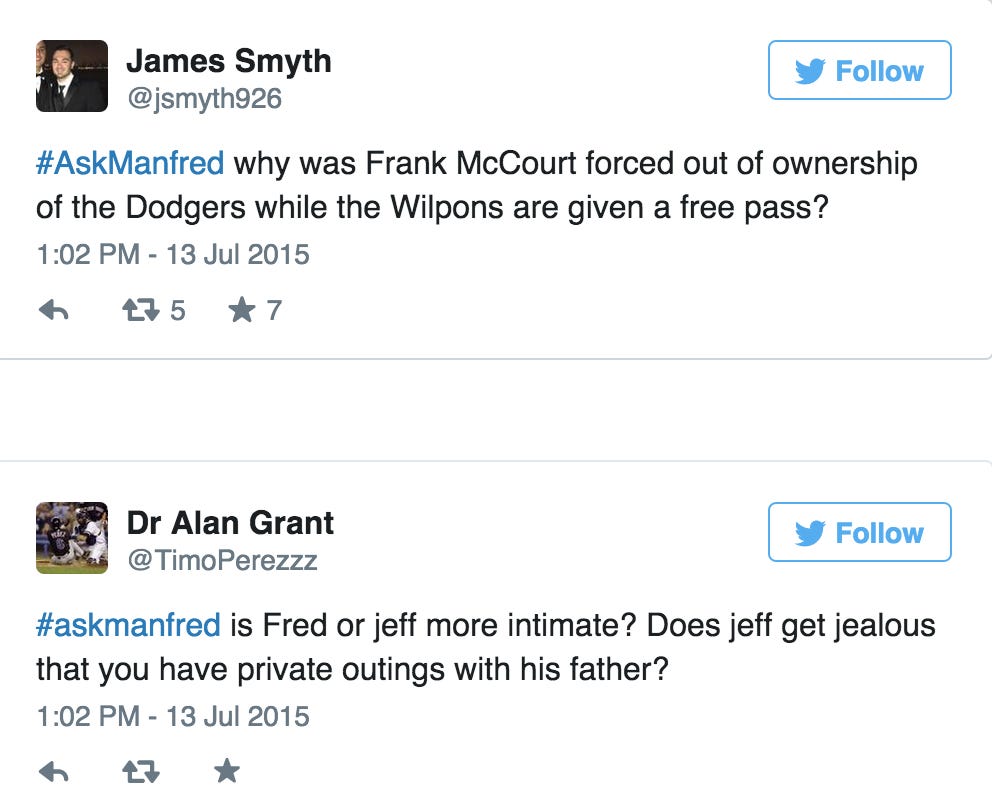 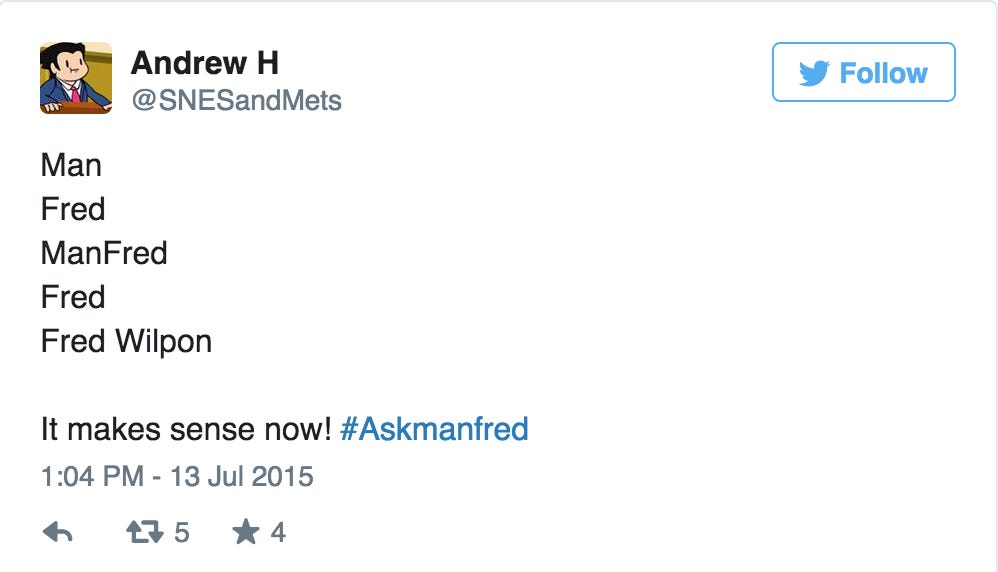 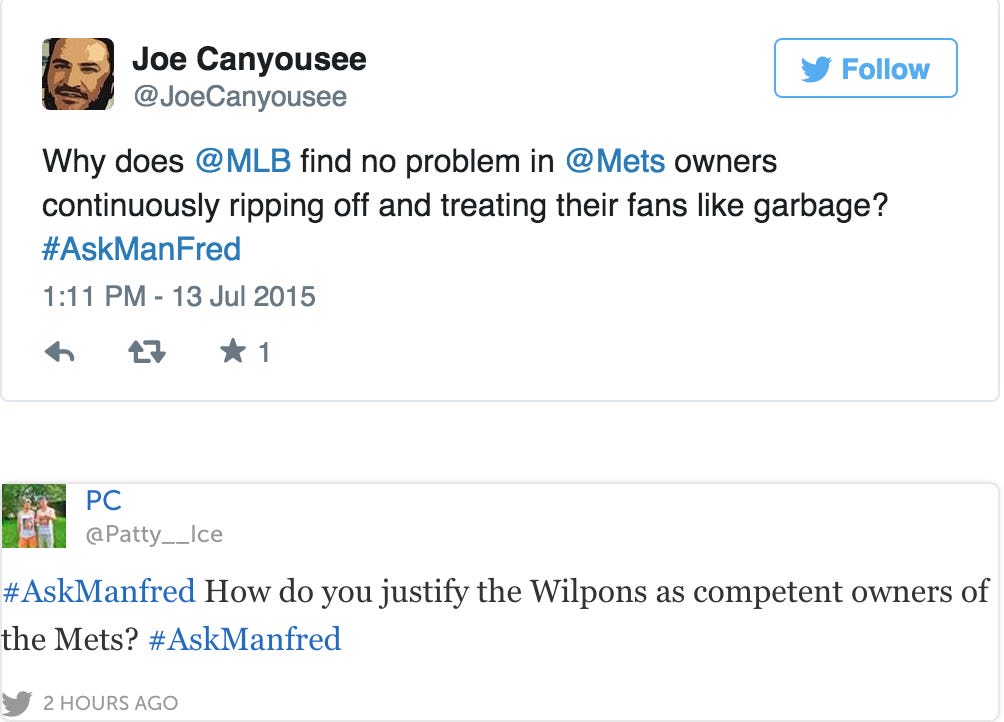 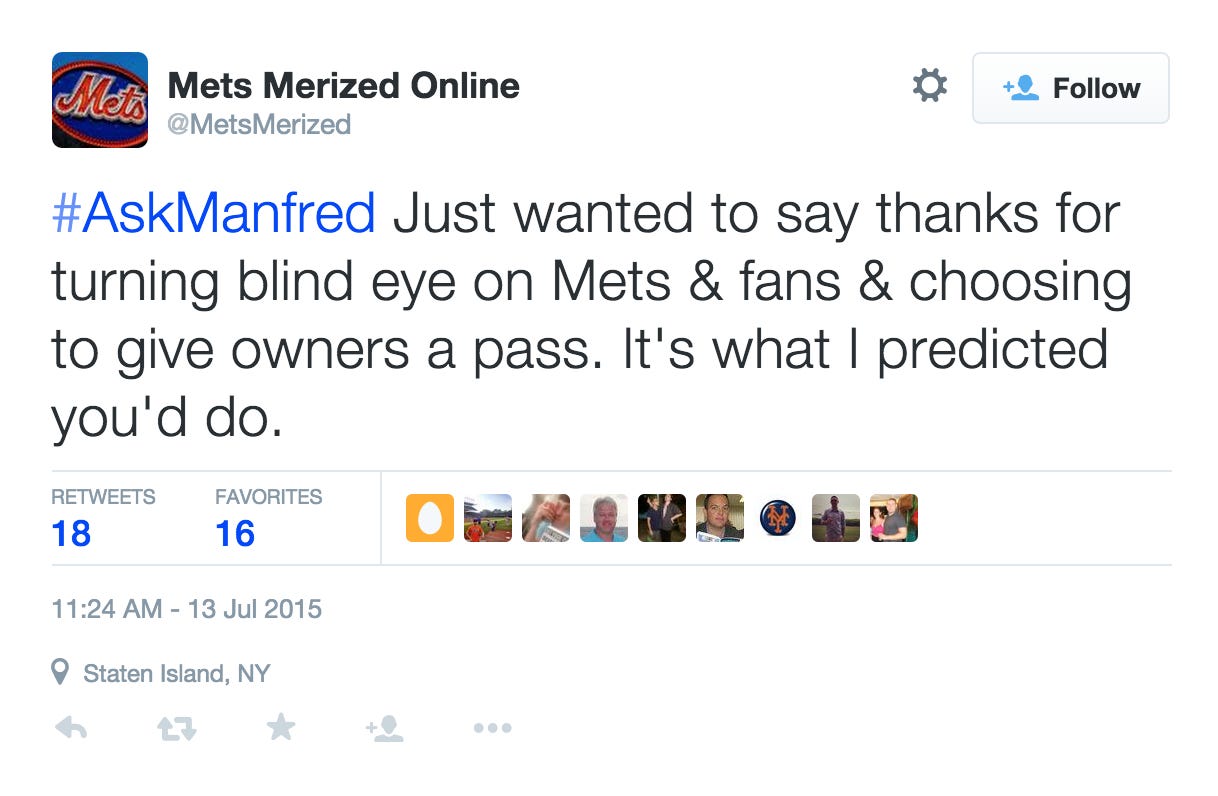 NYDN – The Major League Baseball season may be on break, but angry Mets fans refused to take a day off from complaining about their owners. MLB commissioner Rob Manfred, in Cincinnati for the All-Star Game, held a Town Hall meeting Monday afternoon and took questions on Twitter, opening the door for some Mets fans to bombard him with questions about owners Fred and Jeff Wilpon. And they weren’t kind. “#AskManfred Why won’t you force the Wilpons to sell like Bud did to McCourt?” tweeted one fan, in reference to former Dodger owner Frank McCourt, who eventually sold his team after a long dispute with previous commissioner Bud Selig. Another tweet asked Manfred, “What needs to happen for @MLB to oust the Wilpons? Is there anything a fan could do to expedite the process? Please be specific. #AskManfred.” And there was this one: “Can you show some guts and hold the Wilpons accountable so National League baseball in New York can be successful?” Despite a stellar pitching staff and the Mets being five games over .500 at the break, many fans are upset the Wilpons have slashed payroll in recent seasons and seem unwilling to add salary this year for a possible playoff push. According to reports, the Mets have the 20th lowest payroll in the league.

Welp a bunch of old folks and out of touch social media PR people decided to do yet another “#Ask…” twitter session which has literally never gone well. They are 0 for eternity on these things. Not one has gone smooth yet. Yesterday was of course another disaster but I can’t even really fault MLB on this one because it kind of came out of nowhere. There was simply no way to predict Mets Twitter was going to hijack this hashtag and bombard new commissioner Rob Manfred with an endless barrage of Wipon tweets. After a few short minutes it was clear the hashtag should have been AskManfredAboutWhyTheWilponsFuckingSuck.

So there was a lot of fun to be had. A lot of tweets bashing the Wilpons for sucking and MLB for continuing to allow them to operate as they do. I kept it classy and asked if Manfred has sex with the Wilpons: 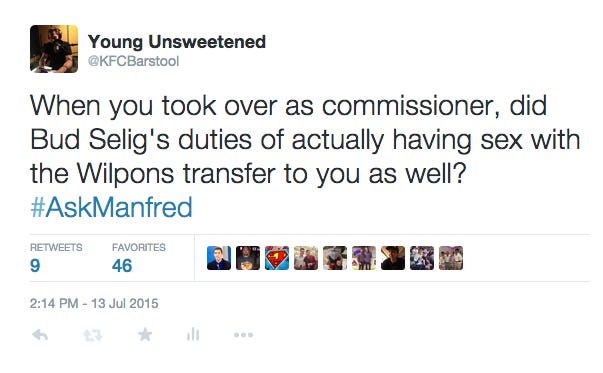 Because back then it made sense. Everybody knew Bud Selig and Fred Wilpon where buddy-buddy. Everyone knew no matter how bad things got with the Madoff scandal, no matter how bad things got with the money and with the team, Selig wasnt forcing anything on Wilpon. Imagine I was commissioner and Kmarko owned a team. No chance I’m screwing him over. But now Selig is gone. So does that under the table handshake stuff keep going? Does that just transfer to Manfred as well?

These are all legit questions I have about the Wilpon situation because I really dont know how it works. On the surface, it appears identical to the McCourt Dodgers situation. This was a direct quote as one of the reasons McCourt needed to sell the Dodgers:

That, to me, sounds identical to the Mets situation. The thing is, none of us really know whats happening behind the scenes. I guess what you need is to understand that standards that the league sets forth in regards to dedicating your efforts and money to improving your franchise. To me, a New York City franchise ranking 20th in payroll is unacceptable. That shouldnt be allowed. To me, free agency acquisitions of of John Mayberry and Michael Cuddyer, during a time when your fan base and the league expects you to try to content, thats unacceptable.  But these things arent like breaking the law or violating rules. Its pretty clear rather than reinvesting money they just pocket it – but when does that cross from like “Well you guys are assholes” to “You guys are like Frank McCourt and you need to sell?”

And then you have fans that point out the fact that they have some of the best young pitching in baseball and are only a couple games out. You certainly cant force anyone to sell when they are in contention. But falling ass backwards into some young arms via the draft and a couple no brainer trades isnt showcasing ownerships desire to win. When they inevitably fail to surround those arms with offensive and defensive help, and let these pitchers walk when their contracts are up – thats when you’ll see the real Wilpons.

The bridge loans they take from the MLB are where shit gets real. Sounds like they straight up take out loans from the league and dont pay them back, and if I’m another owner, I would call bullshit on that. But again, dunno the details or the repercussions.

All I know is, and the fans know it and Manfred knows it, is that a big market, NYC franchise being loaded with this pitchng talent watching their window close by not making a move to strike while the iron is hot and acquire some bats and some defense for the prime seasons of these arms, is bad for baseball. Its literally just staring right at a World Series opportunity and saying “No thanks, we like the profits while being mediocre.”

Remember the days of the Pedro, Beltran Delgado type of splashes? Imagine if that happened right now?? This team would win 155 games. I’m not even asking for that. This team is fucking 34-5 when they score FOUR runs. Just get together some decent bats that can scratch out roughly 4 wins a game and you could win a hundo.