If you live in one place long enough you accumulate a lot of stuff. We've lived in our present home for 34 years and we got a lot of stuff. My wife would tell you it's me who has a lot of stuff and I could say very little in my defense to prove her wrong.

Recently, we made the decision to take a 12' x 12' area in our basement that during the late 80s was my office, and turn it into a workout room. When it was my office I built one 2" x 4" wall, sheet rocked it, hung a black rotary dial phone on it, and tacked up an erasable, four-foot monthly planning calendar so I could schedule plumbing jobs. In front of the wall was a 2 " x 4" frame with a linoleum covered plywood top I called my desk. It was 8 feet long by 2 feet deep. I sat in a cheap folding metal chair when I wasn't pacing around talking on the phone, which had a 12-foot cord for that purpose. There were hanging chimes, wooden signs, and knickknacks all plumbing themed, and codebooks, unopened cellophane-wrapped codebook updates, plumbing magazines, rough-in books, and cardboard boxes full of parts everywhere. I even had a 6 inch, pink, mini cast iron tub that was part of an American Standard promotion, on my desk full of screws and washers. It was a blue-collar office all the way down to the concrete floor.

That's how small businesses function. Weird-looking, but functional offices in-house. As make-shift as it sounds, I felt like a big-time plumbing contractor and I didn't mind spending hours down in the basement after my workday ended, returning calls, pricing jobs, writing bills, paying bills, and speaking with the manufacturer's reps till the wee hours of the night. I had a Rolodex full of toll-free phone numbers of manufacturers on the west coast so I could still get info at night when everyone on the east coast had shut down for the day. I was a full-time plumber and I took my job seriously. I was determined to "Protect the Health of the Nation", one job at a time. 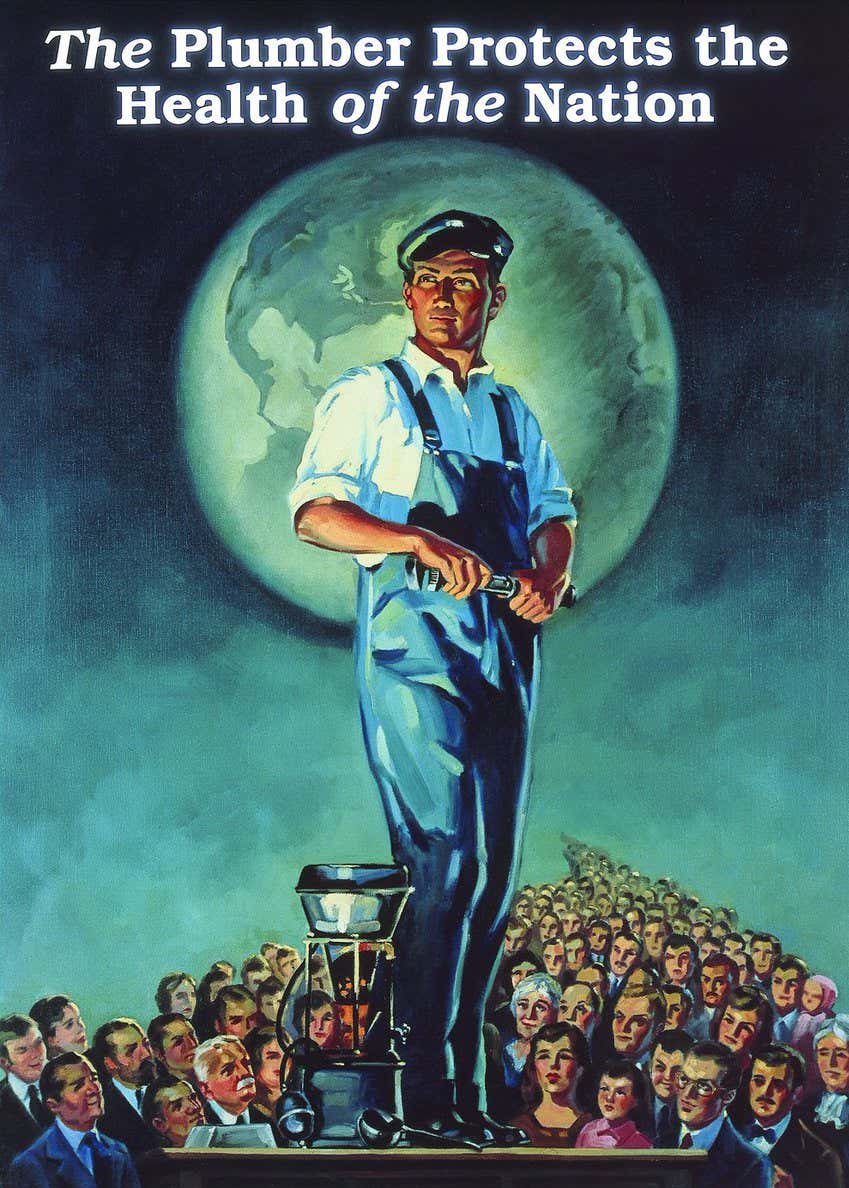 When I recently started going through my old file cabinets and the folders hanging in them, I found contracts and invoices dating as far back as 1987. And what's really weird, I remember every job like it was yesterday, and they're not all great memories. There were some very long, tedious jobs that came back to life and they were immediately haunting. My wife always questioned my motive for hanging onto old contracts and invoices, calling me a packrat and a hoarder, but I reasoned that I saved the stuff so that after I retired I could get one last nostalgic look before tossing them in the trash and saving my kids the time and energy of having to clean out the basement after I die. I always hoped that after I was gone my three boys would look through my stuff and realize how hard I worked to put food on the table, but the reality is they wouldn't have the time, they're all busy with their own lives, and I'm pretty sure everything would've been tossed into a cold, rusted, heartless, steel dumpster without so much as a glance. Bastards! Just kidding, I love my kids.

One of the first things I came across while cleaning was the original letter I received from The Commonwealth of Massachusetts, Division of Registration, State Examiners of Plumbers and Gas Fitters, dated August 19, 1987, informing me that I passed the examination I took on June 9th and I had become a Journeyman Plumber. There was a catch though, I had to forward them a "money order for thirty dollars" before they'd issue the license. The next correspondence contained my license (issued on September 1) and was addressed "Attention Mr. Journeyman Plumber". Although it was congratulatory, it stated, "It is the hope of the Board of State Examiners of Plumbers and Gas Fitters that we will have no just cause to request the return of the license for any illegal use of it on your part". It was a point well taken and over 34 years I've never given them "just cause". 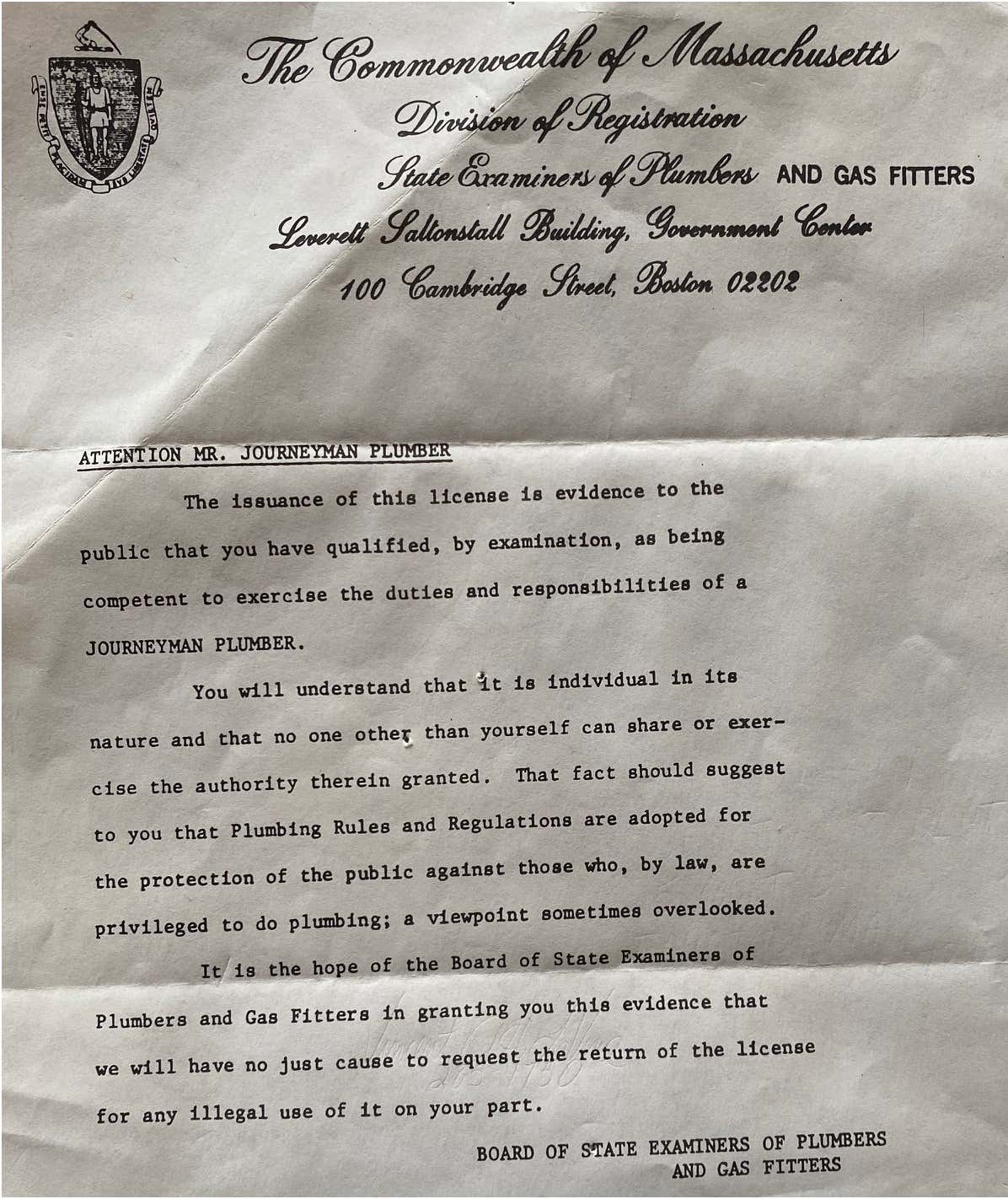 I was so busy when I first went into business as a sole proprietor, that I didn't have the time to think about getting my Master Plumber's License, and when I finally did I'd already been out in the field for three years and was far removed from the book stuff I needed to know in order to pass the test. I paid the then-$200 fee and signed up for a test that was two months away, figuring I'd have plenty of time to bone up on the code… I was so busy I never even glanced at my notes and two days before the test I called to see if I could cancel and get an extension. I said I was sick and they gave me a new date and told me if I didn't take the test on that day, I'd have to pay another $200. Fair enough. I had a few weeks to get out my notes and study…

I never opened my notes, not even once, until the night before when I realized how futile it would've been to try and cram. So, I resigned to taking the test, flunking the test, and then paying another $200 and taking it again. I figured at least I'd have a chance to see the monster so when I took it a second time it wouldn't be so intimidating. On Saturday morning, when I arrived at the test site I was extremely relaxed. Knowing you're not prepared and that you're going to flunk took all the pressure off me. Once I had my 100 questions multiple choice test in hand, was seated, and began taking it, I couldn't believe how much I actually remembered. My heart was pounding, I was flying through it. Sure, there were things I'd forgotten and I took a guess and circled an answer anyway, which is better than leaving a question blank, but I knew I had a puncher's chance.

I finished before the maximum allotted time of three hours and I didn't see the point of going back through any of it. I left thinking I had a shot at getting the 70% I needed to pass, but I knew it was gonna be close. On the way home I was relieved it was over and I could get back to work. 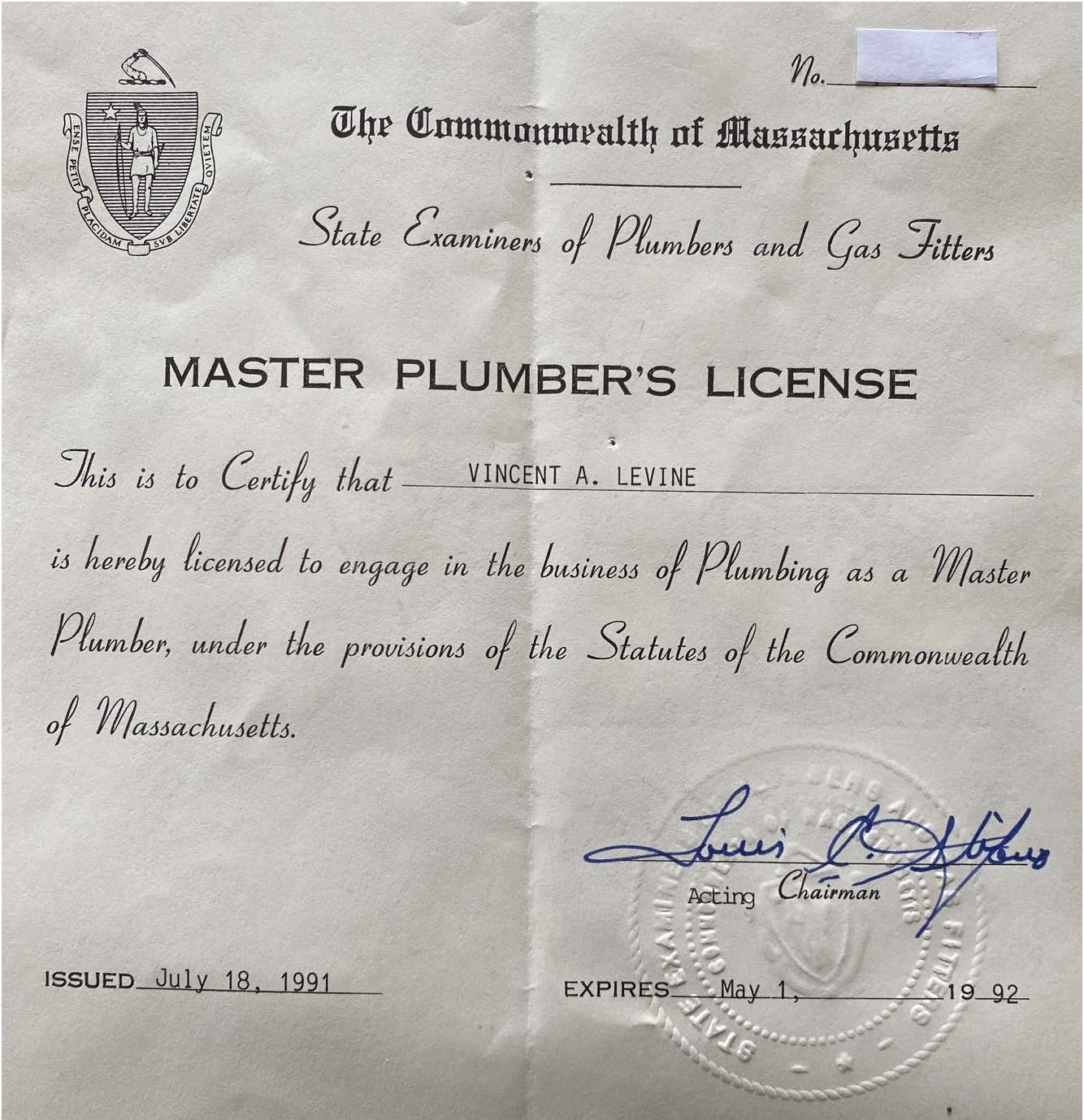 A few weeks later, I got a letter from the Commonwealth certifying I had passed the test with an 83 and I was a Master Plumber. The license was issued on July 18, 1991.

Although I went toe-toe with more than a few Plumbing Inspectors over the years, what plumber hasn't, and a few customers stiffed me, shit happens, the plumbing trade was very, very good to me. I bought and paid for a house (it took 30 years), my 3 kids never went hungry, and other than a bunch of broken bones and some torn ligaments, I survived…

Once the workout room is completed and all traces of my former office are gone, I'll still have all the memories and without the mess. My wife will be happy about that…