As a proud member of the Fordham Pussy Patrol, I keep up with Fordham basketball. I've seen more losses in Rose Hill Gym than I would like to admit, but as Herb Brooks once said, NOT TONIGHT.

Fordham came into last night 0-2. Known more for their coach who coaches without shoes/shirt than their actual team. 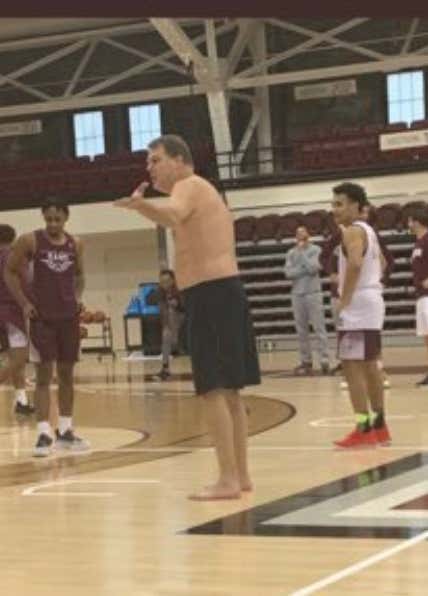 When I say Fordham stinks, they stink. They haven't made the NCAA tournament in the 21st century. Spider, another member of the Fordham Pussy Patrol, has been tweeting to get Jeff Neubauer (their coach) fired for years!

Their first 2 games were straight-up embarrassing. They were 3-point favorites to George Washington at home and ended up losing 71-47. They went on the road to La Salle as 6-point dogs only to lose by 37….but NOT LAST NIGHT.

Fordham played so well in the 1st half (only down 3) that Dayton had to run a practice during halftime. They were RATTLED.

I had the joy of watching the game with Doogs, Dayton alum. Who has watched his team fall to the GUTTER of the A10….a loss to FORDHAM.

Nobody believed in us. Rico Bosco had a 3-star play on Dayton minus the points! They thought Fordham was dead! But we fought BACK.

To celebrate, it looks like Fordham coach Jeff Neubauer decided to jump for the first time in his life:

Look at this guy? Think he has ever jumped before in his life? His run/jump reminds me of Brandon Walker. 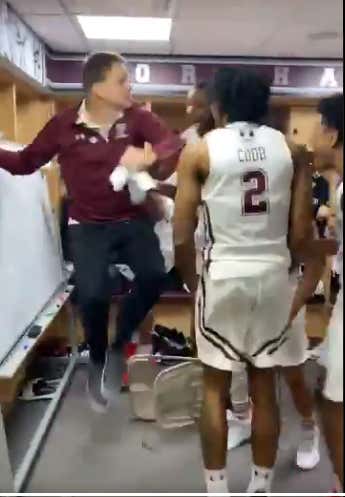 Soaking it all in, in an empty Rose Hill Gym. Just like normal.