Doc watching his son enter the doghouse because #BallIsLife

The Knicks are #BACK!!! I don't know if I have ever done a 180 on a player quicker than I have on Austin Rivers. I didn't like him in college simply because he willfully decided to wear a jersey with the word DUKE on his chest, which is the case for every other player who did the same. Once he was in the NBA, I held that grudge against him along with loving the idea that Chris Paul led a bunch of players through a goddamn labyrinth in the bowels of the Staples Center to beat the snot out of Doc Rivers' kid.

HOWEVAH, now that Austin is wearing my team's colors, I love him. Not just because he is playing for my team but because he has been a veteran that instantly makes me feel like everything's going to be alright just by being in the game. He's my Knicks version of Logan Ryan for the Giants this year. Not a star or anything but just a veteran calming presence when he is playing, at for my dumbass watching at home.

But pulling a Grandpa Simpson GIF and basically walking into his house after a long road trip then immediately leaving while his girl begged him to stay is the stuff of legends. Especially since, and I quote, he "did this on Christmas!" When your girl is hitting you with that octave, you know you are in trouble.

Think of all the things he could have done with his lady instead . He could have…

Hung out at home

Gone to the beach

Gone horseback riding at the beach

Or even listened to music

Instead Austin Rivers left his lovely lady to work on his craft as a member of the New York Knickerbockers. If that isn't a sign this shitshow may be turning around, I don't know what is. You know what? I'm gonna do the thing! 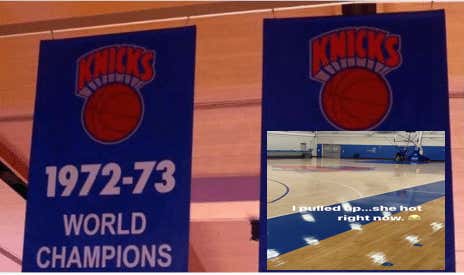 We'll work on the nickname because you can't have a backcourt named Quivers in the same Association where there is a backcourt named Sexland. It's embarrassing to the franchise that already has plenty of embarrassment. But everything else seems to be coming up Knicks right now and I honestly have no clue how to handle it.