Welcome back #ReagsReaders. Gotta admit it feels so fucking good to see a schedule like this again. We're practically in full on college hoops mode where we should be getting awesome conference games every day and then roughly 120 games every Saturday. You can't beat that. You just can't. Speaking of awesome conference games. Gotta take a minute to talk about Oklahoma State and WVU last night. What a collapse by Oklahoma State. Up 19 at home, you had WVU on the ropes and for as much as I like Mike Boynton as a head coach he made some weird decisions in terms of lineups and how to attack WVU's press late that baffled me. Sure, the players also have to not to turn it over and get a defensive rebound, but it was a full collapse by Oklahoma State. I know that Big Oscar T. is a damn good player and a big loss for WVU. But I actually like the makeup of this roster a lot more now. They can play around Culver with a bunch of perimeter players instead of trying to run a congested hi-lo with Oscar and Culver. It gives him a better chance in the post without doubles and a clogged lane. The development of Miles McBride also makes me feel that way too. WVU has a perimeter guy that can hit shots and put the ball in his hands. 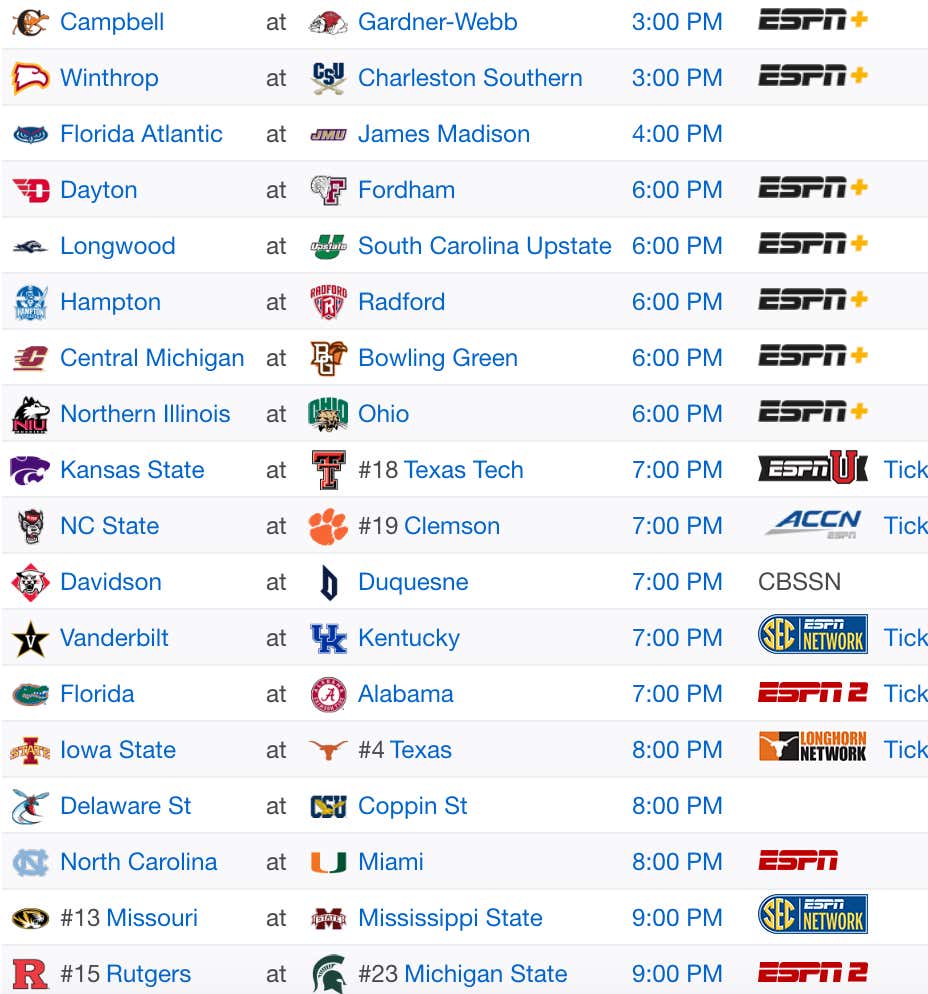 Game is at 7pm at Alabama

Reasoning: We took Alabama against Tennessee and got an outright win. Why? They were due for positive shooting regression. Well, that should happen again here because Florida's 2-2-1 zone tends to sag in the halfcourt after the press. With Alabama's uptempo style that should lead to open looks, which is where they thrive. Another key here? Florida's defense fouls … a lot. Sure, Alabama sucks at the free throw line, but they should have a ton of attempts. To cover 3 we need that. Both teams dominate on the offensive glass so that's a wash. The other key for me? Florida is 191st in the country in turnover percentage while Alabama forces turnovers on 21% of opponents possessions. Even more important, Florida is 248th in their turnovers being steals. Give me the free points on those possessions please.

Game is at 7pm at Texas Tech

Reasoning: Yes, I'm a bit scared of Texas Tech's offense scoring enough to cover here. But, how does Kansas State score? Tech's defense is reliant on taking away middle, forcing everyone baseline and then using that as an extra defender. Outside of Virginia there may not be a better team that rotates defensively than Tech. The only thing Kansas State does well is offensive rebounding. For the other side of the ball, McClung will continue to use that high ball screen and Tech crashes the offensive glass. Kansas State also fouls a ton. Tech should take advantage of that. We're also playing a bounce back here. Tech is coming off an OT loss to Oklahoma State. I trust Beard in this spot for a blowout.

Game is at 7pm at Kentucky

Reasoning: I truly believe Kentucky found something with Dontaie Allen finally playing more minutes. The main reason is his shooting which opens up the lane a little bit. Cal has already said Allen is going to play more minutes and even though Kentucky doesn't have Terrence Clarke tonight, that will be the case going forward. With teams having to focus on Allen and Mintz shooting that should lead to more easier touches in the post for Sarr, Jackson and Ware. Really I'm just banking on a BJ Boston figuring shit out. If he can get going offensively and start hitting a couple jumpers, this offense won't look as putrid as the first 7 games.

Game is at 9pm at Michigan State

Reasoning: It sounds crazy but it's true. Right now, Rutgers is the better team in every aspect of the game. Michigan State is currently struggling defensively, ranking 80th in the country. The main reason is they are giving up a ton of open looks from three. Sure, Rutgers doesn't shoot a ton from behind the arc, but they are a 39% shooting team from there. Rocket Watts has also taken a step back recently and found himself in Izzo's doghouse. Does he get out of it this game? I'm banking no because of Rutgers defense.

Game is at 9pm at Marquette

Reasoning: When I look at just the numbers two main things stick out. UConn is the 2nd best offensive rebounding team in the country. They get offensive rebounds on 42% of missed shots. That's insane. Marquette is an average defensive rebounding team. Right there should be free points. Then Marquette turns the ball over on 21% of possessions, which is 239th in the country. UConn turns teams over a decent amount - 20% of possessions. UConn is also a damn good three point defensive team - both from attempts and percentage standpoint. Bouknight will be the best player on the court and I'm not quite sure how Marquette matches up with him. They'll put McEwen on him, but if there's a switch there's a mismatch for him.

Reasoning: Marcus Garrett is questionable for this game and it sounds more like he won't play. But, that's okay. Say it with me. Bounce back game. Kansas is coming off a straight up ass kicking by Texas. You don't think Self will have them ready for TCU? Especially a TCU team that really struggles on offense? There's really nothing that sticks out about TCU's offense. They are average at shooting. They are average at taking care of the ball. They don't get to the line much. When they do get to the line they shoot just 62%. Kansas starting to go small is really opening it up for them. Even without Garrett - arguably the best defender in the country - this team is still great on that side of the ball. They can switch pretty much everything and while they don't block shots they force you into tough ones. Bounce back city.