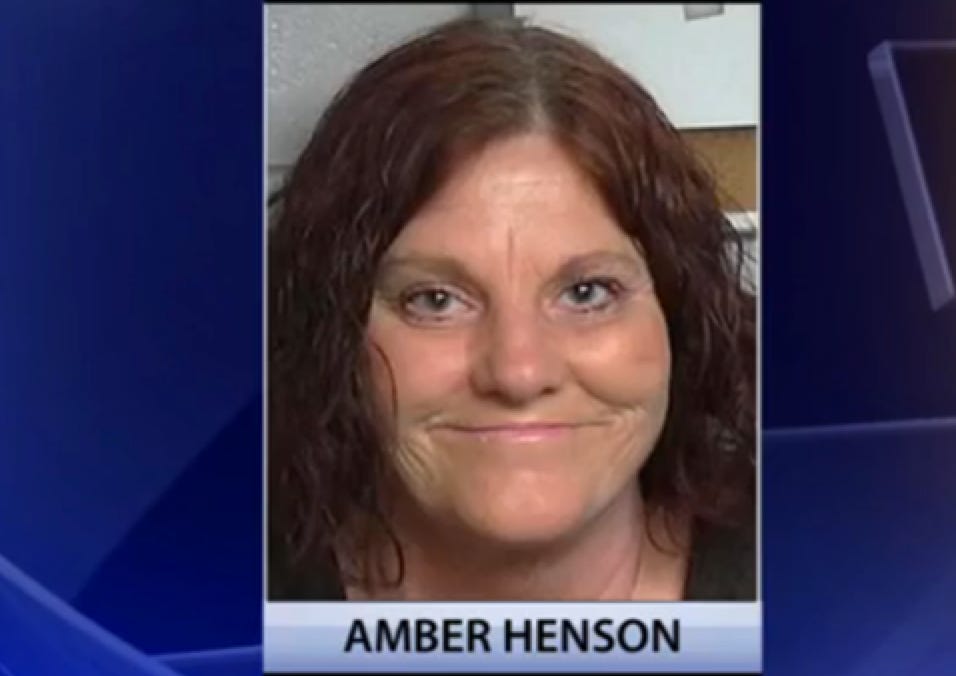 (Source) — Citizens of the Tahlequah area on Thursday helped local police track down a woman accused of pulling a knife during a confrontation with a group of boys at Taco Bell. Police Chief Nate King said the suspect – who was later identified as 48-year-old Amber Lynn Henson, of Park Hill – was at Taco Bell when she apparently became agitated while using the Internet.“The boys were kind of in the way of the drink fountain and she had to squeeze through them to get her drink, and she got agitated and spilled her drink on one of them,” King said. According to a police report, Henson was asked to leave Taco Bell after the water was dumped on the boys and she began cursing. King said Henson stood outside and began to glare into the business through a window. “When the boys left, she confronted them and pulled out a knife,” King said. Police Lt. Billy Dowling said Henson’s knife blade was open, and she asked one of the boys, “You want some? Any of you, come on.” She was about 3 feet from one of the boys with her knife blade pointed at the boy’s chest.

Look man, I get it. Maybe you scoff and think that you’ve got to be a psycho to use a Taco Bell WiFi and expect it to work, like eating at a Taco Bell and expecting to to be nutritious. But guess what? If you say you have WiFi then you better fucking have it. There’s nothing worse than going into an establishment and not being able to use the internet, even after they explicitly tell you they have it. I don’t care if it’s on a plane, a MegaBus, a Starbucks, or the headquarters of an internet company: if you expect to be able to use the internet and you can’t then it’s infuriating. If it takes longer to load a page than it does for you to eat your Crunch Wrap Supreme then of course you’re going to lose your mind. That’s just the way it is. So this whole situation is 100% Taco Bell’s fault. You don’t want knives getting pulled? Then either have functioning internet or don’t have it at all. None of this “we have WiFi” then you can’t even open a YouTube video because it’s so slow bullshit.