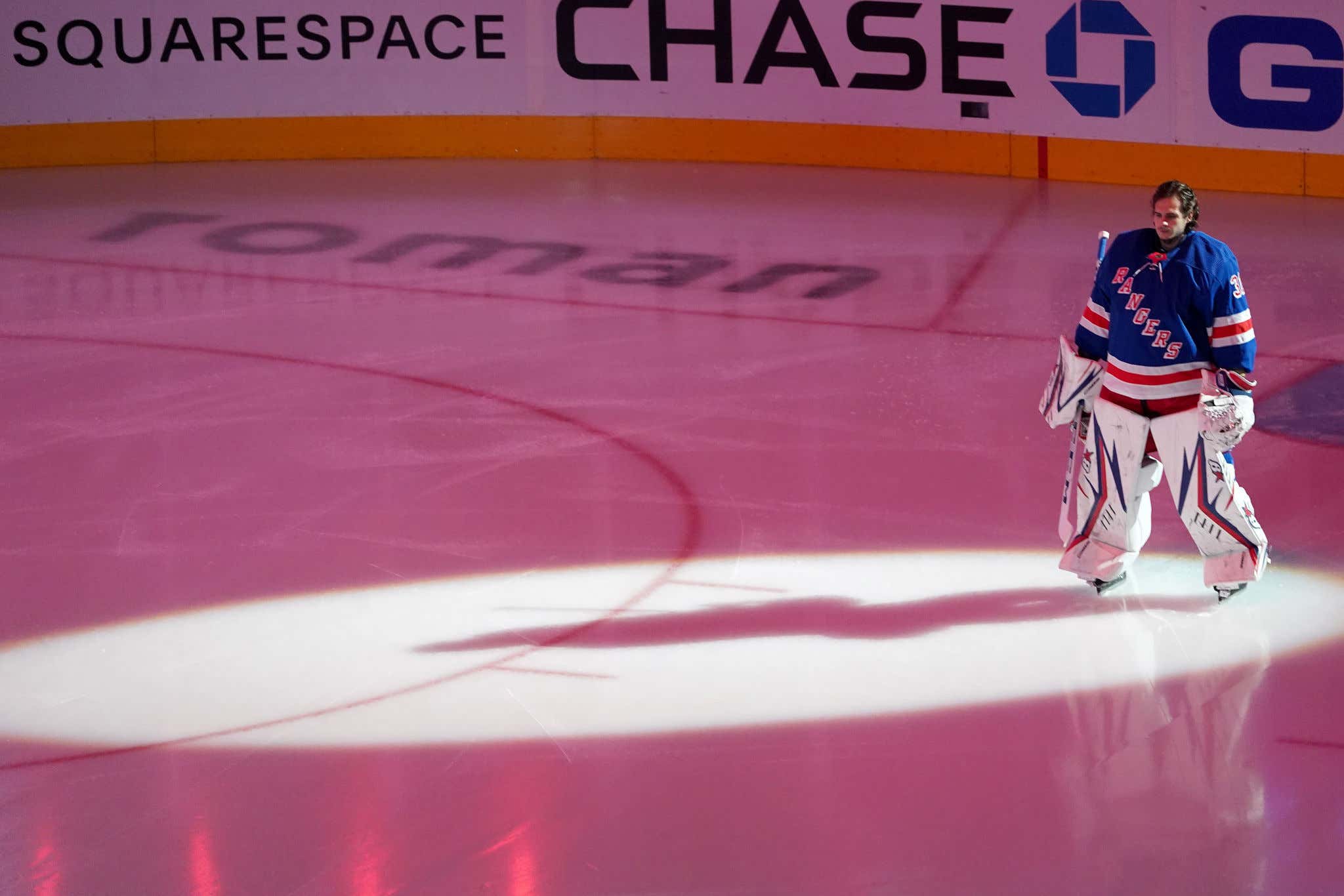 To recap, we're staring at a 56-game season & strictly intra-division tilts throughout. Realistically speaking, you're gonna need to push 30 wins to qualify for bonus May hockey. Divisions have been revamped, with the Rangers swapping Carolina & Columbus for Boston & Buffalo. Eight games a piece against five other squads with legitimate playoff chances (sorry NJ & Buffalo) battling over one of four postseason invitations allowed to each division like the good ol' Patrick Division days. No wild card teams means no potential 5th team squeaking in, so there's even less opportunity for anyone on the bubble - which is likely where the league's youngest rostered Baby Blueshirts will be. Whether it's on the right side of the bubble or not remains to be seen. There's surprises every year. But let's evaluate the rest of the division and see how optimistic Rangers fans should be about sneaking into their first dance in four seasons.

Last season's 4th-worst Eastern Conference team certainly bolstered their top six with the additions of Taylor Hall & Eric Staal but there's still big-time questions on the back end & in net. Dahlin is a stud, Ristolainen is a reliable minutes-muncher & Jokiharju is just 21 with solid upside. After that it's "meh" at best and not a ton in the system. Ukko-Pekka Luukkonen is their future between the pipes with Dylan Cozens & Jack Quinn en route in a couple years - but in terms of competing for a top-4 slot this season? Even if '17-18 Hall returns alongside Eichel & Ullmark ends up one of the league's biggest surprises, they're nowhere near deep enough to silence another off-season of #9 trade speculation.

The Metro's cellar dwellers cleaned house at last season's deadline & didn't do much to replenish for the immediate future - rightfully so. They'll take their lumps for another year while Hughes/Hischier develop into the superstars they're expected to become & a few other future lynchpins potentially get their first tastes of NHL life. It'll be interesting to see how they play the upcoming deadline with Zajac, Palmieri, Gusev & Murray as quality rental options (although I expect they'd wanna keep Gusev). They're also currently projected for about $40M in cap space next season so they're in as good a spot as any rebuilding team can be. For now though, anything other than high lottery odds would be a stunner.

The defending Metro champs are loaded. A full season of Dillon & Carlson is a legit top pairing while Orlov and Chara (assumedly) round out an excellent top four. Sheary is a sneaky good signing at $750k for a contending squad - he's got a couple rings with Pittsburgh & can play anywhere in the lineup. Great depth guy who can step up for an injury in the top six. In full-fledged win-now mode under new coach Peter Laviolette, Washington looks to be a playoff lock as long as Ilya Samsonov can shoulder an unquestioned #1 role. Without their Lundqvist safety net, there's a lot of pressure on the kid - but it's virtually impossible he won't be an improvement on the abysmal season Holtby had where, thanks to the Caps' offensive firepower, they somehow still managed to win more than half his starts.

Really not much to say here. The Metro runners-up were very, very good last year and are still very, very good on paper. Carter Hart has a Vezina with his name on it eventually. They're loaded up front even without their former #2 overall pick - so if Nolan Patrick can return from a migraine issue that cost him his third NHL season & contribute, it'd be hard to find a deeper top nine. The only question mark is who steps up with Niskanen gone? He & Provorov were an all-situations juggernaut pairing for Philly and while Provorov is a stud in his own right, Niskanen had a lot to do with the youngster's best season yet. I don't think that's nearly enough to keep them out of the postseason, but it's certainly a big loss for a squad aiming to atone for their second-round exit.

The Pens went through quite an overhaul after a shocking play-in round loss to the Habs. Tristan Jarry is now the true #1 after posting top-ten peripherals and heavily outperforming Matt Murray who's now in Ottawa. Defensively, acquiring Mike Matheson (questionable contract aside) & Cody Ceci is a certain upgrade over Jack Johnson/Justin Schultz to round out their defensive corps. Their top six is as good as it gets with a full season of Jason Zucker (12 points in 15 games) along with swapping out Hornqvist with a younger, quicker Kasperi Kapanen. Their biggest issue last year - health. Sid missed 28 games. Malkin & Rust 14 each. Guentzel 30. Yet they still finished 3rd in the Metro with ease. While Pittsburgh definitely has a few injury-prone guys (Letang, Malkin) it's highly unlikely they get bit by the injury bug just as hard again. If Jarry doesn't fall flat on his face I don't see how Crosby, Geno & Co. aren't playoff locks.

Honestly not sure what to think here. Varlamov was a beast in the playoffs as the Isles marched through the top two Metro teams en route to the ECF. Sorokin is expected to be the next "one of the greats" so they're covered in net - but losing Toews and Boychuk on the back end is gonna hurt unless a 21 year-old Noah Dobson is ready to make a serious impact. A left side of Leddy/Pelech/Greene is serviceable but unspectacular (although I think Pelech is an underrated defender) without Toews. They've essentially kept their forwards intact though & get a full year of JGP. They'll undoubtedly be a pain in the ass to play against, as usual - but for a team who was a point out of a "standard" playoff spot & closed the regular season as the worst Metro team from around Thanksgiving on (after their incredible 15-0-1 streak ended), I'm certainly not writing them in as a shoe-in top-four squad.

Hear me out. The Bruins were the league's best regular season squad by a longshot last year & it's likely pretty dumb to bet against their core. But they've got no one replacing Krug or Chara who were two of their top three minute-eaters while each anchored their special teams units. There's a pretty big drop-off on the back end after McAvoy, Carlo & Grzelcyk so it's fair to wonder how far their elite defensive numbers could slip. Early word on Pastrnak (hip) & Marchand (sports hernia) is promising, but Pasta could miss a quarter of a short season while Marchand is no lock to start on time. Also, let's not forget they're in a much tougher division. Detroit & Ottawa aren't around to hand over 16 free wins. They'll try to rally around the doubters and they'll probably be just fine, but for an older team with this many question marks and minimal room for error in a 56-game schedule it wouldn't surprise me if Boston ended up a 5th place team that would've qualified in any other division.

Somehow the Rangers managed to get rid of Marc Staal, who actually had a pretty solid season in a limited role, and downgrade. Hi Jack Johnson. Losing Fast is not ideal for the short term on a squad already lacking an overall defensive identity (although I guess 'disaster' is an identity), despite replacing him in the top 9 with the #1 overall pick. Unless Jacques Martin is a legitimate spell-casting wizard I think the best-case scenario is ending up a middle-of-the pack team in terms of goals against - which is what they were once the calendar flipped to 2020. Only three teams were shorthanded more than the Blueshirts, so simply getting the PK above the 80% mark would be miracle enough. There are no reinforcements personnel-wise, but it's gonna be real interesting to see how this Trouba/DeAngelo tandem Quinn has rolled with at the start of camp will mesh. Both are making some serious coin yet each have a lot to prove if they're gonna be an all-around, reliable duo.

Offensively, this crew should be able to hang with the best of 'em for a long time. It looks like the top two lines will remain intact with the exception of Kakko hopping up in Fast's vacancy. With a pro season's worth of experience under his belt, regardless of how rough it was, and the arrival of Lafreniere there's much less pressure & spotlight on the young Finn. Easy to envision a Svechnikov-like awakening on a line with Strome and the Breadman. Speaking of Laf, I think he qualifies as a HUGE upgrade over Brett Howden on their third line so there's the potential for even more scoring from an offense that ended up top-five in the league. The ceilings for all three of Laf, Chytil and Gauthier are sky high.

Are they the least likely of the bubble teams to sneak in? Of course - especially with just four spots available. They'll need a whole lot to go right for them and that includes a couple of unexpected disappointing campaigns from the competition. Shesterkin will need to pair his Calder with a Vezina nomination. Lafreniere will need to be an instant superstar while Kakko kills it. Trouba will need to bounce back with an $8M season while Fox avoids a sophomore slump. They'll need to avoid significant injuries while Zib, Panarin, Strome, DeAngelo etc. maintain last year's numbers. Like I said, that's a lot - but is it possible? Absolutely. Don't forget, although they finished 7th in the Metro it was a logjam. Just 2 points out of 4th. Among teams in their newly-created division, only two (BOS & PHI) were better than New York from New Year's Day on (~30 games).

The 2021 season is less of a marathon, more of a sprint. Who better to lay your money on in a sprint than a group with an average age a full year less than the next-youngest?