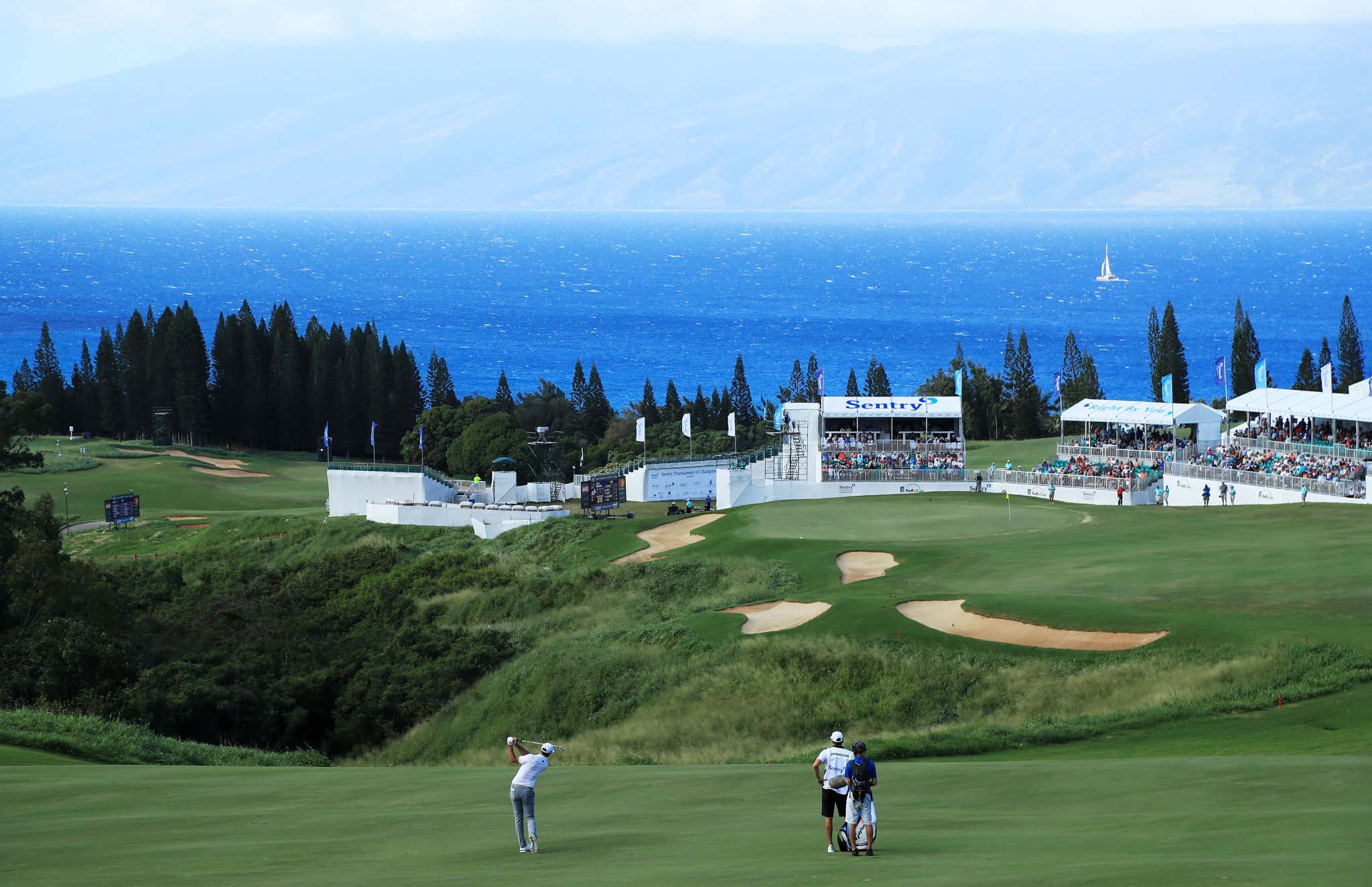 Aloha bitches!!! We are back for PGA Tour golf in 2021, starting with the Hawaii swing. This week brings us the Sentry Tournament of Champions at Kapalua. Traditionally this is a tournament reserved strictly for tournament winners during the previous PGA Tour season. Due to tournament cancellations last year, this year's edition will also include golfers who qualified for the Tour Championship. All in all, that means 42 of the world's best will on display to play one of the world's most picturesque courses on the island of Maui. And these guys are excited to show their stuff for four days in a tournament that has no cut and a guaranteed check. Of the 45 players eligible only Rory McIlroy, Tyrell Hatton, and Jim Herman (COVID) are sitting this one out. That makes for a star-studded field.

Obviously the prerequisites to even get into this tournament play a big part in this, but Kapalua has proven to be a course for thoroughbreds. Last year's leaderboard is proof positive of that, as Justin Thomas beat out Patrick Reed and defending champion Xander Schauffele on the 3rd hole of a playoff. The rest of this leaderboard is stacked with studs: 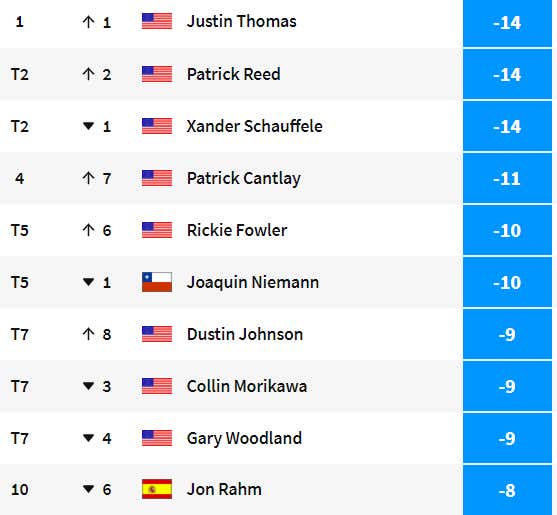 The list of recent winners backs this fact up as well. DJ and JT are as good as it gets and each have won this event twice.

Tiger and Phil each won this twice in their hey day too, including this epic duel between Tiger and Ernie Els back in 2000 that's just too good not to share.

As I mentioned before, Kapalua is one of the most picturesque golf courses on the planet. I'll let this drone footage do my talking for me.

As the video shows, the course is pretty spacious with a lot of room for error off the tee. In fact, this course has more fairways hit than any on Tour. It's a resort course after all. That's a recipe for all those low scores over the years, as evidenced by that -30 spot Spieth posted in 2016. There's definitely hilly terrain which can make for some uneven lies, but otherwise this course is largely harmless. As for the scorecard itself, it's actually the Tour's only par 73 course with three par 3's and four par 5's measuring close to 7,600 yards (I know the scorecard below says 7,411 but everywhere else I've researched this week tells me it's in the high 7,500's.) We're looking at a ton of drivers and wedges here folks. 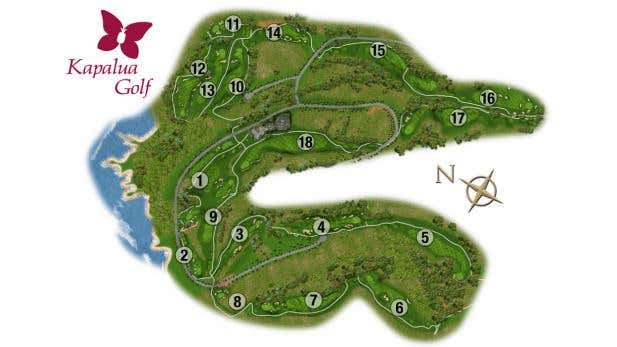 Now at this point you might be asking yourself, if this course is so scoreable and the winning score is consistently well over -20, what the hell was up with last year? Well I'm glad you asked. The one thing that has the potential to protect this course is the wind coming off the Pacific. Last year gave us a couple of rounds with the wind whipping well above 20+ mph with gusts of much more. This year's forecast looks much more benign, so expect the birdiefest to continue. If you're betting winning score props or round O/U's, you might want to lean on lower scores, but keep an eye on the forecast as the tournament evolves. Right now it looks like we're in for a treat. 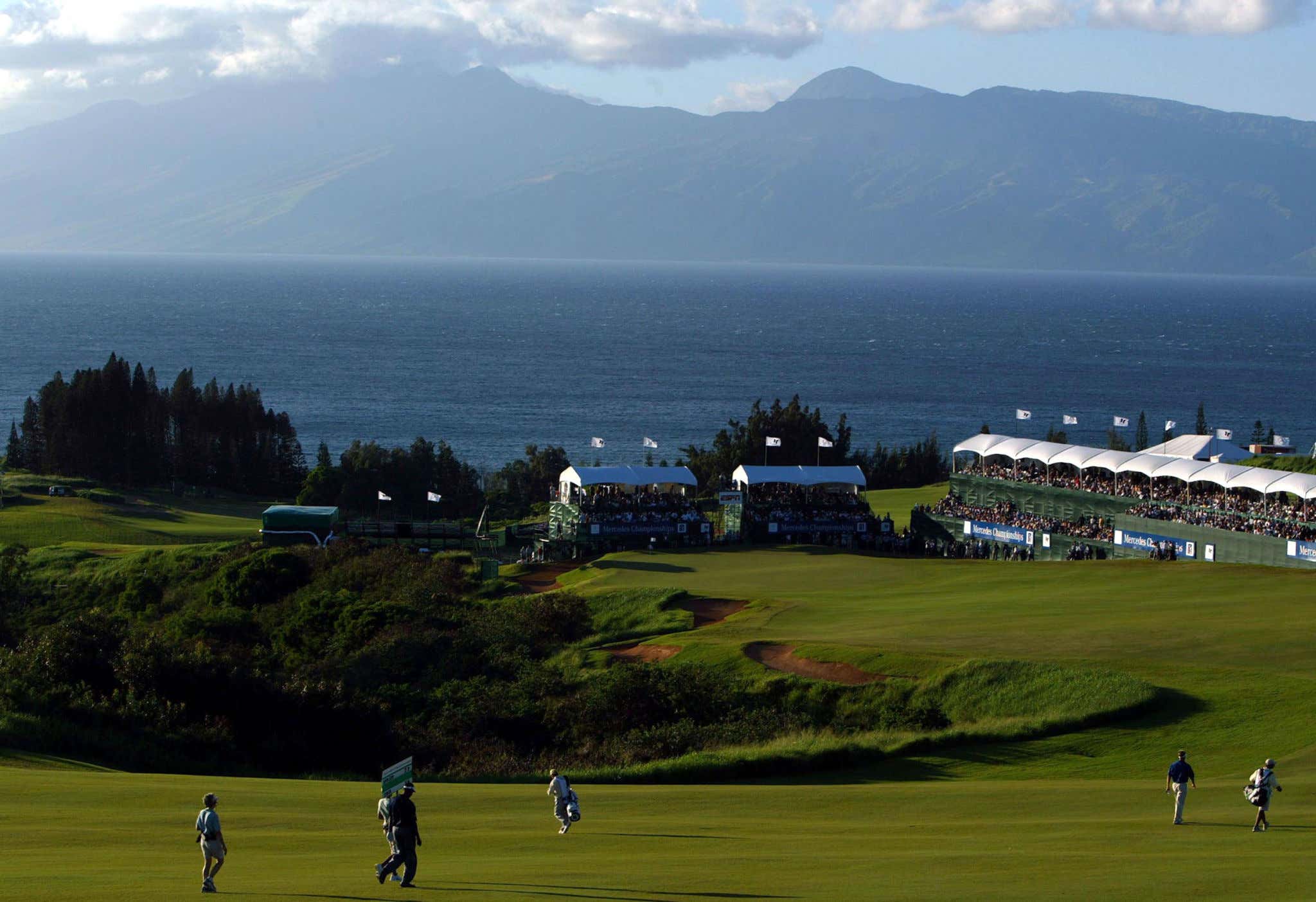 What an absolute beast of a hole. 663 yards is obviously a truckload, but it probaby plays closer to 600 due to how steep the it runs downhill. It's reachable in two if you're feeling gutsy and trust yourself to work the ball right to left and run it onto the green. It's a dream come true for a guy like Bubba Watson and it creates incredible drama down the stretch on Sunday. JT barely cleared the junk short of this green last year to find his way into a playoff after Xander Schauffele 3-putted from 35 feet. Patrick Reed buried a 20-footer to get himself into the playoff too. If you're committed to watching Steelers-Browns on Sunday night, keep an eye on this leaderboard because you won't want to miss popping over to this tournament if it comes down to 18. 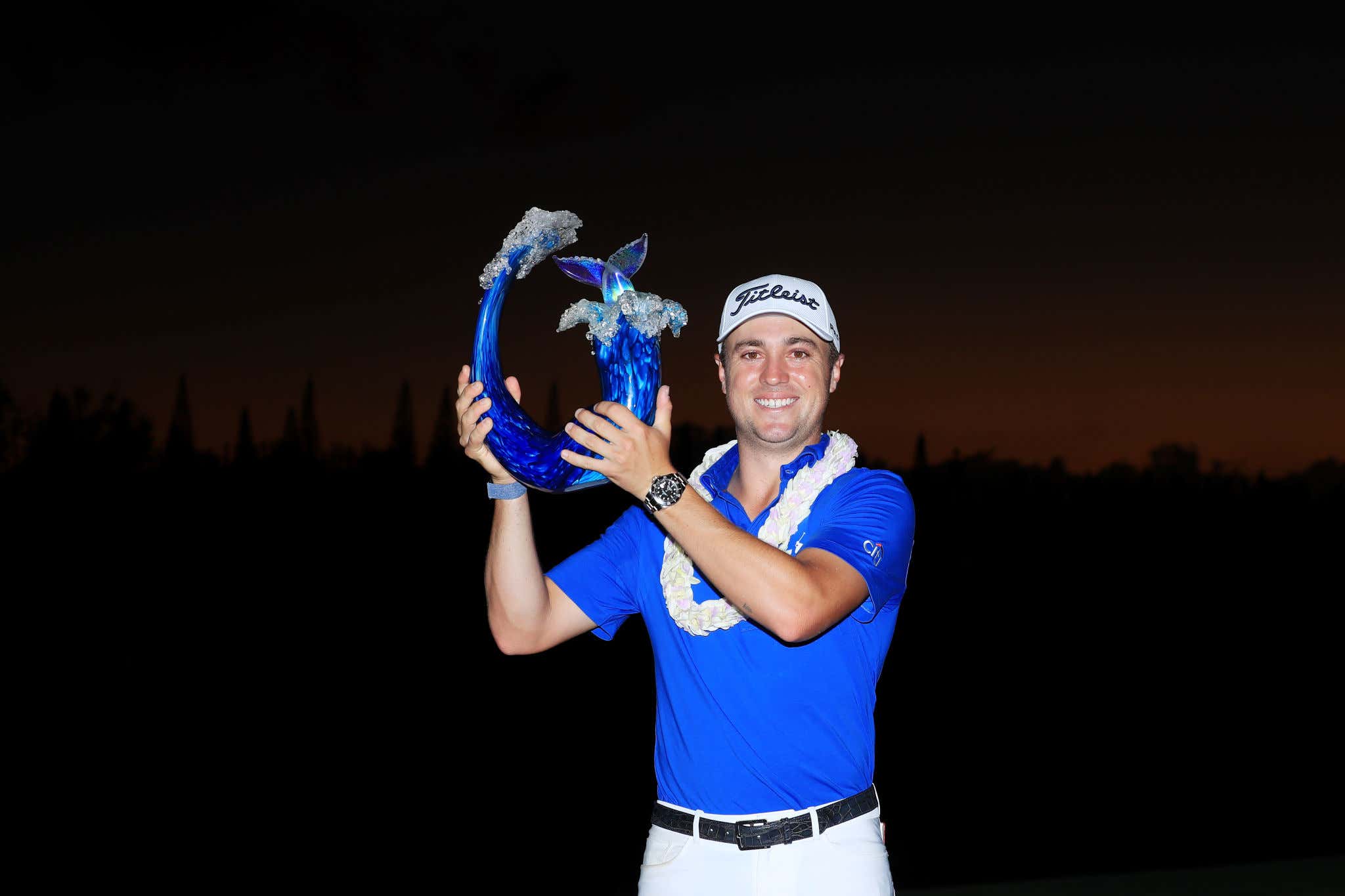 It's… just a dolphin looking thing? Hey I'm on record as saying I'm all for the weird looking trophies on Tour. Leave the traditional looking trophies and jugs to the Open Championships of the world and put a little pizzazz on your tournament. With that said, this trophy leaves a lot to be desired. It looks like something a housewife puts on a beach house glass coffee table, or a Dratini for those in the younger crowd. I guess I can't completely bash it given that I loved the chameleon at the Mayakoba (that some others hated) and the lei is a nice touch but I simply cannot justify giving this more than a 4/10. 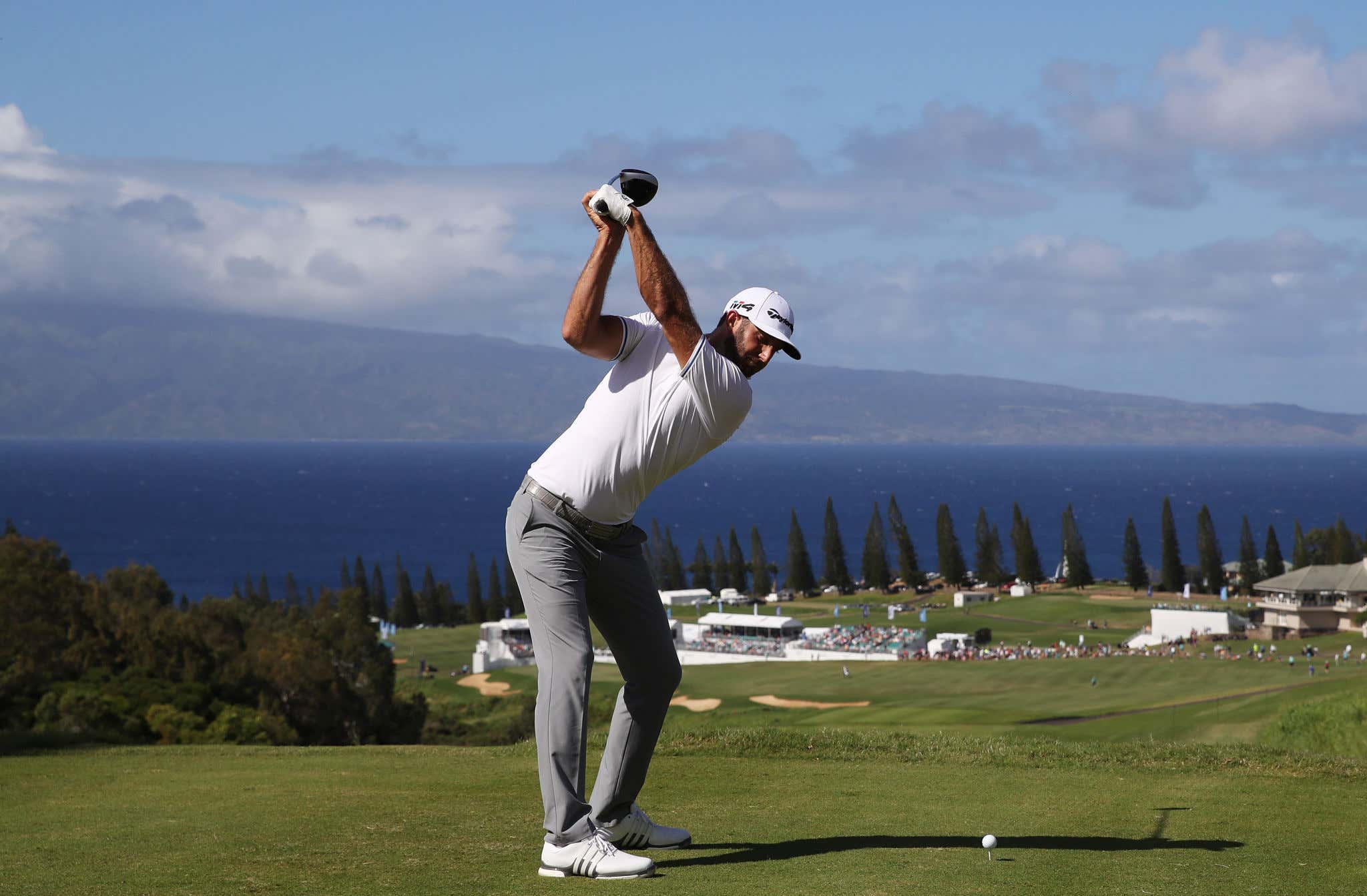 Dustin Johnson is the betting favorite at the Barstool Sportsbook at +600. The two-time winner at Kapalua is teeing it up for the first time since his Masters win back in November. In most scenarios, I would tend to shy away from golfers with prices that steep on that long a layoff. But the majority of this field hasn't played since then either so that point is probably moot. He's the number one golfer in the world for a reason and he's won here twice. He's top 10'd here 8 straight times. +600 is probably about right. And I'd be remiss not to include this clip, which Brandel Chamblee once argued was the greatest golf shot ever hit.

Defending champion Justin Thomas is right on his heels at +700. He just as easily could be the favorite here given his two wins, plus having the feather in his cap of having won an Sony Open in his day as well.

Here is the top of the board from the Barstool Sportsbook as of 11 PM Tuesday night:

I think from this group there are two values I like most. The first is Xander Schauffle +900. He's a bone-headed 3-putt away from having been the back to back champion of this event. By all intents and purposes last year's tournament fell into JT's lap. Plus X's final round 62 when he won the previous year to chase down Gary Woodland was one of the most impressive final rounds of golf that I've seen in recent years. There's a touch of concern about how his body will respond after battling off COVID just before Christmas but I've got good feels about Xander here and in 2021 as a whole. I just do.

The other one that I like is Hideki Matsuyama +1800. It's well known what the guy is capable of as a golfer but I think it's gone sneaky under the radar that he hasn't won since August 2017. Because of that Hideki hasn't played this tournament since 2018. But on the three occasions he has played here, he's excelled. Solo 4th, solo 2nd, and solo 3rd are his results, with all 12 rounds under par and 11 out of 12 at -3 or better. He may not have won in a while, but he's obviously due and hell… half of his 6 wins have come in these types of limited field events too. No better time to break through than here. You might want to take him Top 5 +350 and Group B +350 (over Reed, Finau, Webb, and Cantlay) while we're at it too.

Fading Bryson Dechambeau where possible - Kapalua isn't a fit for his game. Strokes Gained - Driving hasn't proven to be a strong statistic here.

Tony Finau to win +2000 - (WARNING: This is merely a FOMO pick. Been chasing that Tony win for like 4 fucking years and there's just no way I'm going to miss the boat. This pick will be a mainstay here for the foreseeable future, ride or don't.)

There ya have it folks. Enjoy Kapalua.