Head to Skyhio.com and check them out. Thank you to Skyhio!
--

The Browns have a chance to make the fucking Playoffs today.

Only one fucking thing matters today:

IF THE BROWNS WIN, THEY'RE IN.

Home game. Wide receivers are back after all of them being out against the Jets. The offensive line seems to be healthy (people forgot about this when clowning the Browns post-Jets disaster). Steelers are resting, or without, a ton of guys…

Win and you're in. No one else matters (technically there are scenarios in which they can lose and make it, but fuck that). Easy, right?

Ha, it's the Browns, of course not!

There always has to be something. You could argue that the Browns have been as badly impacted by COVID as any team in the NFL. Last week they missed all of their wide receivers, but they've been dealt little hits here and there all year, from Myles Garrett to now Denzel Ward being out for their biggest game in nearly 20 years. Shit, they're even without Bill Callahan, their offensive line coach, and arguably the biggest pickup of the offseason outside of Kevin Stefanski.

It sucks, and it still might not be easy today, despite the Steelers resting, or being without, so many guys, just solely based on the fact the Browns have almost zero starters outside of their front four.

But from here on out, we are pumping in ONLY FUCKING POSITIVITY. GO BROWNS.

Okay, done with the all-caps.

As per usual, I split my picks last week.

The Browns didn't come close to covering, but the under hit with relative ease.

I don't expect a low scoring game today. The Browns offense is back to full strength against a weakened (possibly?) Steelers defense. On the flip side, the Browns defense will always give up points because, well, they fucking stink.

I'll keep the positive vibes up and hit the Browns -9 and the OVER 43.5. I just can't see the Browns not scoring a good handful of points today. The offense can't trust the defense, they have to get the job done themselves.

The Browns' absences for COVID do NOT balance out the fact the Steelers are sitting a ton of their best players, but the secondary issues aren't anything to sneeze at.

When it's all said and done, the most important name on this list is Wyatt Teller. He's been the best guard in the NFL this season and the Browns are 8-2 when he plays, and 2-3 when he doesn't (@ Steelers, vs. Raiders, @ Jets). It sounds as though he is going to play this week, but let's keep the fingers crossed! 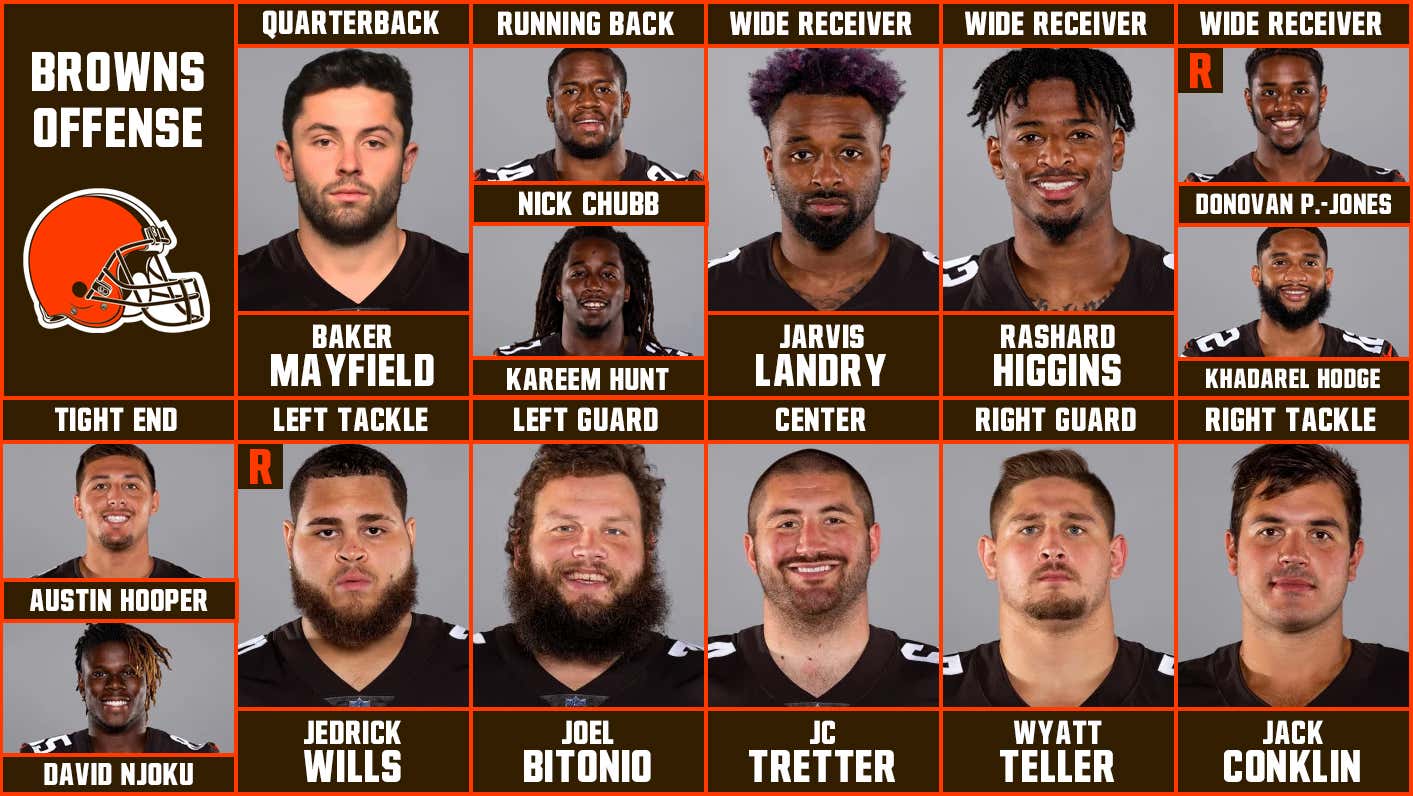 We already discussed Wyatt Teller (Jedrick Wills also returns), but outside of him, the Browns are relatively good to go on offense today.

They will be without Harrison Bryant, their rookie tight end who has performed well. But Stephen Carlson will fill in as the third tight end, with David Njoku, a member of 0-16 draft class, given a chance to help get the Browns to the playoffs in a year where he requested a trade. The storylines are all right there!

I'm excited to see Baker Mayfield back with his wide receivers, especially Jarvis Landry, but hopefully, it will mean the opening of the run game more than anything. They had far too many troubles last week to commit to the ground game early, but it should be far more opened up with a healthy line and a weakened Steelers rush defense.

This is actually the first time the Steelers will face both Nick Chubb or Wyatt Teller this season, as both guys were out with an injury for their first matchup a few weeks ago.

There's really no over-complicating what's in front of the Browns offense. Last week was fucking stupid. They likely failed a little bit by not adjusting well enough early on, but they have their weapons back, their line should be at full strength, and they're going against a defense that isn't playing their best guys (outside of Minkah Fitzpatrick). The Browns have to perform today. No fucking bullshit.

My only big concern with the offense is the fact they've had a severe lack of practice. Between the receivers being out until the middle of the week, and canceled practices due to COVID protocols, the situation isn't ideal.

Big-time positive offensive vibes today because of this…

Now, if there is one spot that could doom the Browns today, it's, of course, with the defense… 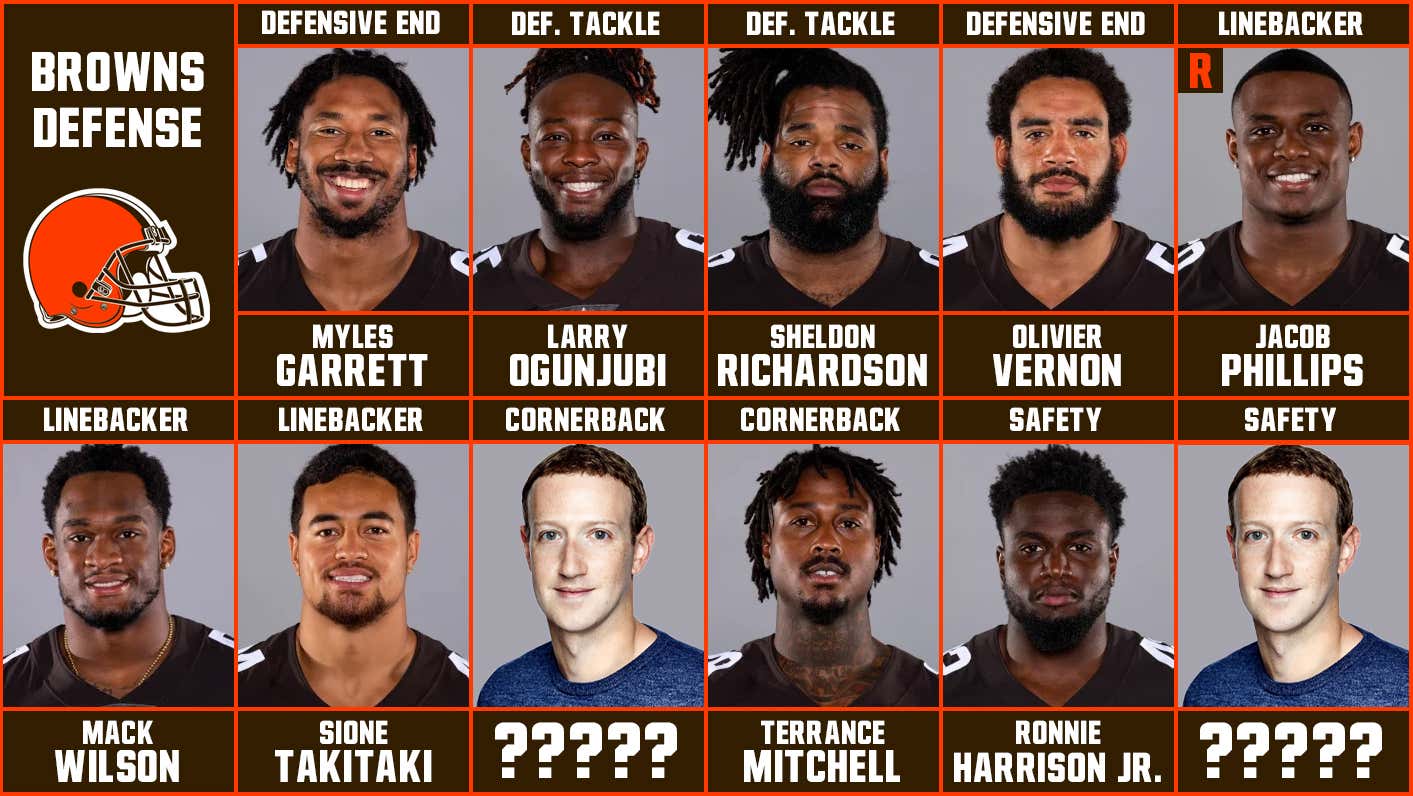 To the defense's credit, they kept the Browns in the game last week.

But holy shit, they need to force a fucking turnover!

When the Browns win the turnover differential or even just end the game all-squared up, they are undefeated. Someone has to make a fucking play, and it starts with the front four. Easily the best part of the defense (the only good part?), the front four, led by Myles Garrett, will be going up against a line missing their center and not protecting the mobile Ben Roethlisberger. The fear of letting the quarterback escape, a problem for a porous Browns defense that can't tackle, is lessened by quite a large margin with Mason Rudolph under center.

The defense line disappointed me a little bit last week, can't have any of that shit against the Steelers.

The defense getting to the quarterback is as important as anything because 1) the Browns secondary is ravaged, with Denzel Ward out and cornerback and safety depth incredibly thin (the return of Ronnie Harrison Jr. is big, and Karl Joseph may play out of position this week) 2) the Steelers brought all of their wide receivers to Cleveland. They may be down Eric Ebron, but with the likes of JuJu Smith-Schuster, Chase Claypool, and Diontae Johnson, the Browns are not out of trouble just with Roethlisberger out today. Their secondary is injured enough (no one really knows how they'll line up today), and bad enough, to keep this close on their own against a solid (possibly really good when balls are not being dropped) Steelers receiving corp.

And while their rushing attack is the worst in the NFL, the Steelers do have James Conner back, and he has had some good success against the Browns in the past.

My faith in the Browns offense is high, but if they lose this game, and blow an incredible opportunity to make the Playoffs, I am going to guess it'll be because of the def-- NOPE POSITIVE VIBES ONLY!

CHANNEL THAT 2002 DEFENSE AND FUCKING MAKE THE PLAYOFFS.

Did you think I'd go the entire blog without mentioning the helmet hit?

In all seriousness, I am curious to see how they officiate Garrett's hits (if he gets to Rudolph) today. Not saying the NFL will flag anything, but you have to imagine (and rightfully so) they'll have their antennas up for any crazy situations. Garrett has been flagged for roughing the passer plenty in the past, so this entire one-on-one battle is worth keeping an eye on.

HAVE TO BELIEVE. I AM NERVOUS AS SHIT BUT FIRED UP.