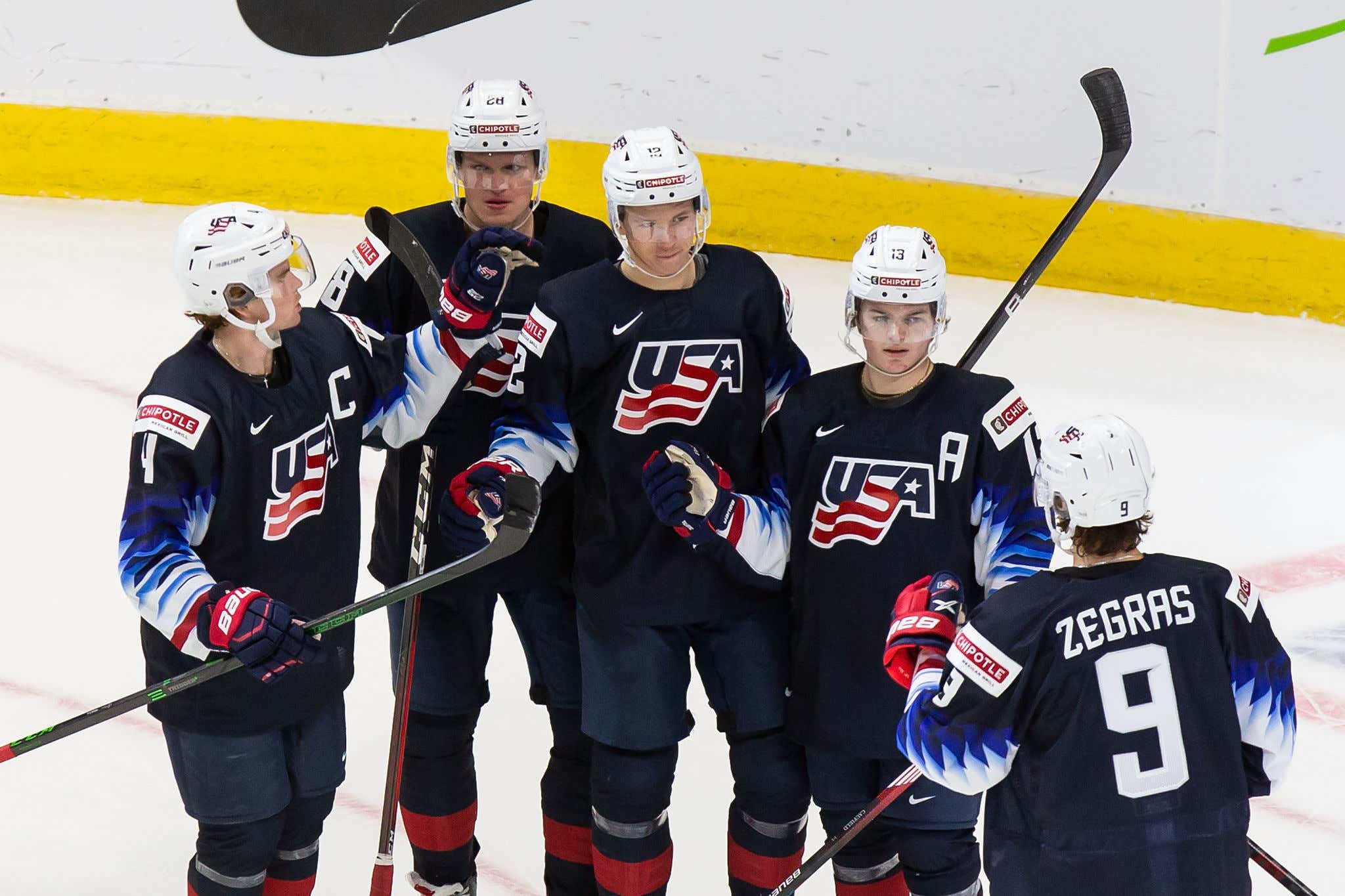 Who: Team USA vs Slovakia

Why: Because USA Hockey is Do or Die

Well, folks, we've got a late night ahead of ourselves. Team USA starts their quest for world domination tonight against Slovakia in the 4th and final quarterfinals game of the World Juniors. Already so far today we had Russia holding off a scare from the Germans to win 2-1. Then Finland came in and "upset" Sweden even though technically they were the higher seed. But as someone who had Sweden as their gold medalists heading into the tournament, this goal was both chaotically awesome and chaotically devastating.

The Finns were down 2-0. They scored to make it a 2-1 game. They scored again just a few moments later but that was called off after an offside challenge. They tied things up early in the 3rd and then delivered the dagger in the final minute of regulation. Sick border war game between the Finns and Swedes. And then obviously Canada beat Czechia to move on.

So now it's all left to USA vs Slovakia. Here's how both teams got here.

USA (3-0-0-1). 1st seed Group B. They opened their tournament with a 5-3 loss to Russia. And then from there they shutout Austria 11-0, shutout the Czechs 7-0, and then shutout Sweden 4-0. Three straight shutouts for Team USA heading into the quarters.

Slovakia (1-0-1-2). 4th seed Group A. They got their lone regulation win of the tournament 1-0 against Switzerland on Christmas. They kept it close against Canada but lost 3-1. Then they lost to Germany 4-3 in overtime, and closed out their preliminary round with a 6-0 loss to Finland.

So USA is clearly the better team here. Doesn't take rocket appliance to tell you that. But the fact that Slovakia was able to keep it close with Canada and Germany tells you that this isn't a team that is going to be an incredibly easy out. If the offense can get on the board early, then yeah, you can put this game away before the 3rd period. But pretty much exactly like the Czech game, the longer you let them hang around the more confident they'll get. So we just need Big Daddy Zegras And The Boys to light it up early and often. And with that being the case, let's get it on. Live Blog officially activated.

(Make sure to follow along on Twitter @JordieBarstool for live updates/highlights. I'll be back here updating the blog after each period)

One of the biggest things Team USA has going for them so far this tournament is their special teams. They've been smothering teams on the penalty kill, and they've been downright lethal on the powerplay. And already in the 1st period tonight, we're seeing it all come together for the Americans. Slovakia had the first powerplay of the night and Team USA kills that off. Then on USA's first extra-man opportunity, Matthew Boldy (MIN) unleashes this sick no look feed to Arthur Kaliyev (LAK) to put the boys up 1-0.

No other goals in the 1st period but one thing to look out for is Trevor Zegras took a shot to the head toward the end of the 1st period. He looked a little loopy on his way off the ice but he stayed on the bench instead of heading straight down the tunnel. It looked like the hit caught him somewhere in the shoulder-to-chin area so let's just hope it was more shoulder.

Either way, USA controlled the pace that period and as long as they keep hemming the Slovaks in their own zone, I love the way this game is going.

So remember how we wanted USA to get on the board early and often? Well the issue here is that Simon Latkoczy is being a real son of a bitch between the pipes for Slovakia and making that difficult as heck for the Americans to stuff the back of the net.

But if there's one person on this US roster who can make Latkoczy say uncle, it's the American Sniper Cole Caufield. Team USA already got up to a 2-0 lead after John Farinacci (ARI) had a shot deflect off of him and past the goalline. But this sniiiiiiiipe from Cole Caufield (MTL) was how you know that Team USA has themselves rolling right now.

The Slovakians would end up getting that goal back a couple moments later, but USA has still been controlling every aspect of this game so far.

Look at how excited the TSN account is for Slovakia to score. They know that Canada doesn't want to have to go up against USA in the gold medal game.

Well….shit. Halfway through the 3rd period, this Jake Sanderson failed clear attempt ends up getting sent right back towards the US goal and this Dominik Sojka tip ends up getting by Spencer Knight on the powerplay.

Time to bear down here, boys. Could really use a greasy goal to get that insurance late in the period. Perhaps it is Bobby Brink 'o clock. Either way, time to grab your sack and close this one out. Because it is way too close for comfort.

Well it wasn't exactly a Bobby Brink goal but after some great forechecking, Brink gets the assist on this John Farinacci goal to give the Americans the cushion they desperately needed late here in the 3rd period.

I know Farinacci wanted to pull the Michigan here getting set up in the office, but I'm so glad he didn't go for it. They needed the goal way more than they needed the highlight, and this was still a sick tuck regardless. Such a gritty line. You love to see them taking control of this game. That's Hard Dick Hockey through and through. Signature USA Hockey.

And after an empty-netter from Matt Beniers, that'll do it. The United States Men's National Junior Ice Hockey Team will be heading to the World Juniors and will be playing for a medal.

They'll face Finland in the semifinals and holy hell what a schedule we have on deck for Monday. USA vs Finland and then Canada vs Russia.

It's going to be a gongshow all damn day. Hope you're all ready, but tonight we celebrate.