Happy New Year, everybody. No. 8 Cincinnati takes on No. 9 Georgia in the Chick-fil-A Peach Bowl today in what should be a pretty good football game if the Bearcats play up to their potential. But all you're going to hear about for three and a half hours is the College Football Playoff and how Group of Five teams are out of it before the season even starts, regardless of what they do on the field.

That is simply untrue.

Yes, Cincinnati went 9-0 this season. No, it should not have been in serious discussions to be included in the College Football Playoff. The Bearcats' best wins were Army, SMU and Tulsa. That just isn't going to cut it.

It's amazing to me either how selective some people's memories are or how little research of the very recent past they're willing to do when it comes to this subject, but Group of Five teams have a very clear way into the College Football Playoff: schedule like Houston did in 2016.

For those who may not remember, here's what the Cougars' schedule looked like just four seasons ago. 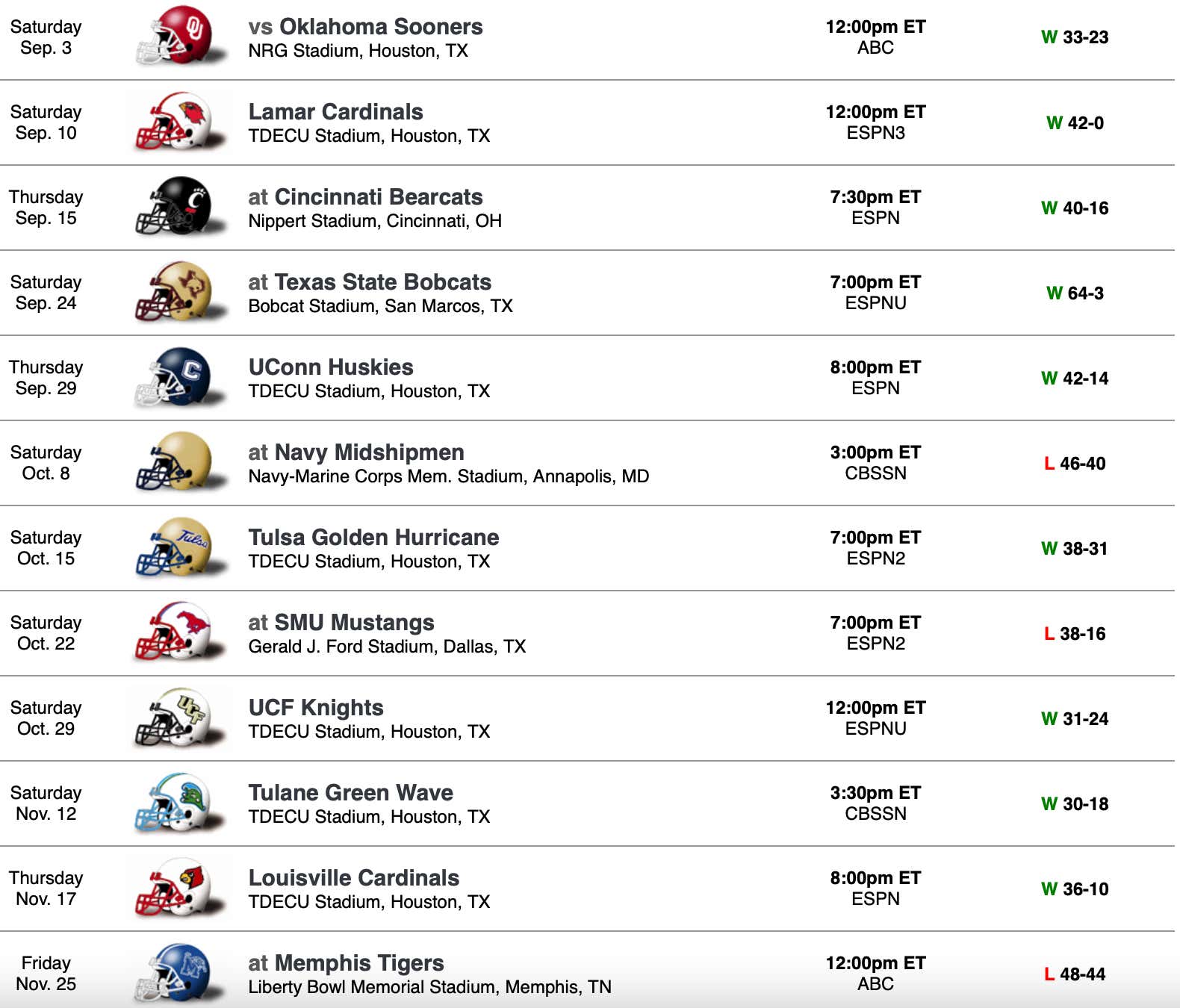 That's right. Houston — ranked No. 15 in the preseason AP Top 25 — went and played No. 3 Oklahoma on a neutral field to open the season as well as put a beatdown on Lamar Jackson and then-No. 5 Louisville. Houston was truly willing to play anybody, unlike these schools who say that nowadays and mean they'll only play BYU at home.

Now obviously, the Cougars didn't take care of the rest of their business in the AAC and that's why they ended up in the Las Vegas Bowl. But having been ranked as high as No. 6 before another statement win against the No. 5 Cardinals, there is no argument whatsoever that an undefeated Houston team would have been left out of a College Football Playoff which featured three one-loss teams that season. And you know why it would have been included? Because it went out and proved it was better than competition that was commensurate with what it would see in the Playoff.

You know what we make Gonzaga do in basketball? It has to go out and play the toughest non-conference schedule in the country to be able to have quality wins on its résumé so that it can be a No. 1 seed when the NCAA Tournament comes around because it isn't tested in its garbage conference. Nobody seems to have a problem with it then, but when Cincinnati wins nine games over average competition, people want to crown it the greatest college football team to ever play the game.

And I guess I should give Cincy at least a little bit of post hoc credit, because the Bearcats went on the road to play Ohio State in 2019. Let's see how that went.

And that was a Cincinnati team which went 11-3 and would have been undefeated going into the last weekend of the season — the Bearcats lost their last regular season game and the AAC Championship game to Memphis in back-to-back weeks — if it had replaced that Ohio State game with some loser non-conference opponent and we would have been having the exact same discussion we're having right now. Except in 2019, we got an opportunity to see how wide the gap truly was.

I also understand things were all out of whack because of COVID and it was a weird year and all that, but that's the way the cookie crumbles sometimes. If you aren't being challenged in your conference the same way teams in the SEC and Big Ten are, then you need to play games that prove you're better than those teams you're aspiring to compete with for a spot in the Playoff.

Cincinnati is a fine football team. Central Florida had a fine football team a few years ago. But until one of these American Conference teams is willing to play a schedule like the one Houston did in 2016, I've had about enough of the Playoff discussion. There are too many teams playing games week-in and week-out that are tougher than most any game on Cincinnati's schedule who deserve a chance to win a national championship.

Until a Group of Five team is willing to show during the regular season it can beat a team capable of making the Playoff, why are we still having this discussion?