Well, it's here. The day of the CFP semifinal. Happy to have had such a long season that definitely didn't seem like it was going to happen at parts of the summer. Let's enjoy some fooootbballl today. 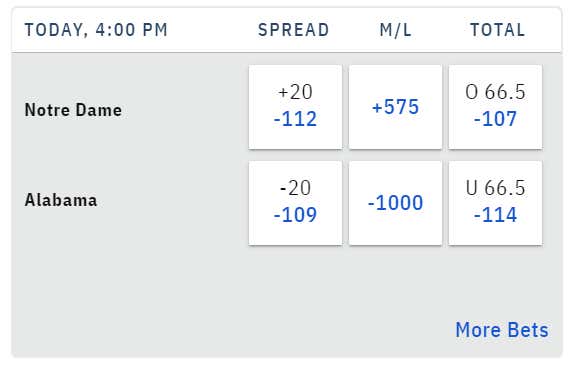 I've gone back and forth with this one since the CFP selection show….20-point spread? In the semifinal? With everyone telling their friends who have never gambled before to bet on Alabama? Seems like an easy fade…right?

We'll start with the problem that some point to when trying to discredit Alabama…their defense.

46 points against Florida…48 against Ole Miss. Not great. The other games? Pretty damn impressive, so much so that it has led them to being a top 10 defense in SP+. You can also chalk up those big numbers to two elite offenses. Florida ranks 3rd in SP+ while Ole Miss ranks 9th. Will an offense like that be in Jerry's World today?

Is Notre Dame An Elite Offense?

Eh….I wouldn't say so. An elite offense does not get held to 10 points in the ACC Championship.

Ole Miss had WR Elijah Moore and TE Kenny Yeboah. Florida had Kedarius Toney, Kyle Pitts, and Jacob Copeland. Who does Notre Dame have? Who are the elite weapons that Ian Book is going to throw to in order to keep up with Alabama's offense? Tommy Tremble? Ben Skowronek? Michael Mayer? They don't have the arsenal required.

Mac Jones Is One Of The Best QBs In CFB History

Does he benefit from Najee Harris, Devonta Smith, and John Metchie? 100%, but he is using them at a truly elite level.

Is this year's Alabama offense as good as LSU's offense last year? I'm not ready to say that, but I think we are in a similar territory where it's hard to quantify just how good they are. Alabama ranks top 5 or 10 in almost every advanced statistic out there. The scariest part is this isn't even their best offense! Projected top 10 pick Jaylen Waddle was injured early in the season. Imagine these guys at full strength? On top of all that, OC Steve Sarkisian is the best play-caller in the country.

I'm not sure how Notre Dame is going to stop the Tide, especially after watching what Clemson did to them. Maybe they put together the greatest blitz packages known to man? With their DC that has been more focused on his new job at Vandy than this game? Anything is possible, but I just don't see it happening.

I think we are in for an ugly game here. Notre Dame just doesn't have the weapons to expose Alabama's true weakness, as Florida and Ole Miss did. The athletes required to stay in this game will not be on the field tomorrow for the Irish.

I wouldn't be shocked if we see a dominating performance by the Alabama defense, one in which Notre Dame is kept in the mid-teens. Alabama's offense will race ahead before Saban puts his foot on the breaks in the third quarter. 45-13 final. 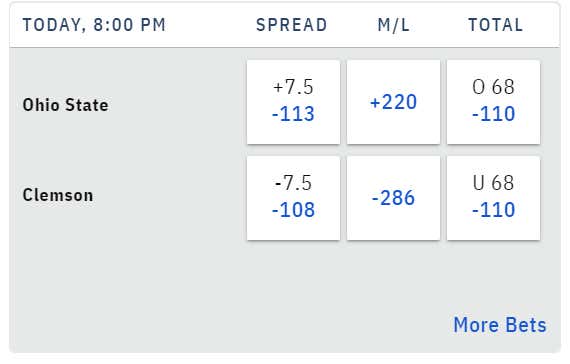 This one should be a delight. These two teams hate each other, more so Ohio State hating Clemson, but we may be in store for a CHIPPY affair.

Let's take a look at the projected difference between Clemson and Ohio State in some of my favorite power ranking systems:

Have we forgotten how good Ohio State truly is?

7.5 points in this game is still shocking to me…could the market be over-inflating Clemson that much? Just based on OSU's bad performance against Northwestern and Clemson's beat down of Notre Dame?

Justin Fields Gets His Weapon Back

Our last memory of Justin Fields was his less than stellar Big Ten Championship game. What we often forget about that game is WR Chris Olave not being available to play. Tonight, he is back. Fields will feel more comfortable with Olave and Wilson to throw to, opposed to just Wilson. On top of that, Justin Fields and the Ohio State offense have themselves a new weapon….Trey Sermon.

Let's not forget what JK Dobbins did to Clemson last year.

If he scores here? Clemson may not have won that game.

SP+ still has Ohio State as the 2nd best offense in the nation! Ahead of Clemson! At some point during the 22-point performance against Northwestern, we lost sight of that fact. We cannot forget that when we are preparing for this game.

Ohio State is an offense that lives on explosive plays. I could see multiple 20, 30, 40+ yard plays from Ohio State that are backbreakers for the Tigers defense. They are susceptible to them. Now it's up for Justin Fields to break them down.

Beating Clemson is going to be a tough task for OSU. Slaying Trevor Lawrence won't be easy, but they have the talent to hang with Clemson and find themselves against Alabama.

We see a line of 7.5 that is overinflated in part due to OSU's "bad" performance against Northwestern and Clemson taking down Notre Dame. Clemson and OSU are incredibly similar and a touchdown spread should not be available in this game. Ohio State will expose Clemson with big plays and be in this game until their last possession.

We'll start with Cincinnati. I currently have a parlay pending with Oklahoma/Georgia/Bama straight up. Oklahoma hit, Alabama will hit, but the more I think about this Georgia game I get nervous.

The Bulldogs are going to be without 7-8 of their starters. Cincinnati on the other hand is treating this game like it's their Super Bowl. They have a CLEAR motivational edge.

Where Cincinnati has excelled on offense has been their passing attack, ranking 12th in EPA/pass. Desmond Ridder is probably the best QB in the country you've never heard of. Georgia's struggled this year defending the pass, ranking 75th in passing success rate, 109th in completion percentage against, and 125th in air yards.

Cincinnati also has a nasty defense that ranks 2nd in the entire country according to SP+. Georgia's offense has looked spectacular since JT Daniels has taken over, but he did it against the likes of Mizzou, South Carolina, and Miss State. Cincinnati is going to be a massive test for him.

Give me Cincinnati plus 8.

43.5 points may seem low for Northwestern and Auburn but these two offenses kind of stink. Northwestern ranks 94th in EPA/play. Northwestern has a top defense, 6th in SP+, and will be able to shut Auburn down in their first game without Gus Malzahn. I see a low scoring game, one of those bowl games that you look at the score in 2 weeks and think "oh yeah, that game did happen."