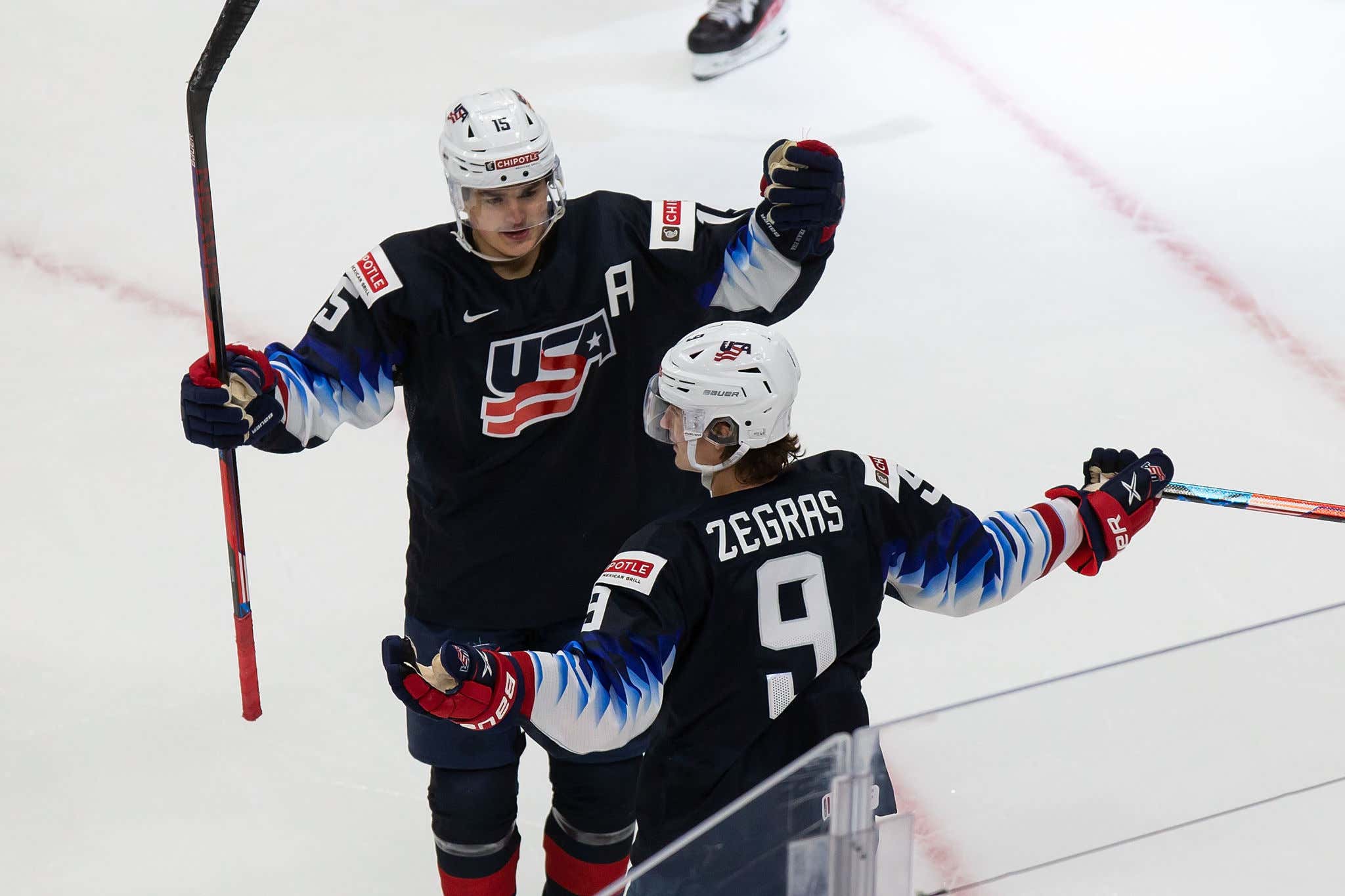 Who: USA vs Sweden

Why: The boys are buzzin' in the New Year

I know it's overplayed as shit to say this but 2020 has been a pretty wild year in the world of hockey. Games have been cancelled, seasons have been paused, bubbles have been formed. Tonight we get the final game played in this total gongshow of a year, and it'll be Team USA taking on the Swedes in their 4th game at the 2021 World Juniors.

Whoever wins this game has the chance to head into the quarterfinals as the top seed coming out of Group B. USA would have to win in regulation to make that happen, any win at all for Sweden would get the job done for them. And in every tournament since 2007, that would pretty much be a guarantee for the Swedes. The last time they lost a game in the preliminary round was New Years Eve 2006. Since then it was 54 straight preliminary round wins for Team Sweden. But that streak was finally snapped last night against Russia in overtime.

If you didn't get a chance to watch that game last night, you missed out. It was 65 straight minutes of some insane back-and-forth puck. Easily the most intense game played of the tournament so far this year, and that could for sure help the Americans tonight. Because Team Sweden has to be a little gassed. Team USA just got to hang out and watch with the night off.

But on the flip side of that, Alexander Holtz has himself going and he for sure seems pissed off right now. A kid with that much talent playing "fuck you" hockey is an absolute force to go up against.

Holtz is going to be a menace every time he touches the ice tonight. But luckily Team USA has a few guys like that of their own. Trevor Zegras has been a top 2 player in the tournament so far this year and I'd only put him behind Tim Stutzle. Cam York has been better than any defenseman on Sweden's loaded roster so far through the first 3 games. And if the American's need to get greasy to get on the board, you can count on Bobby Orr Brink to get the job done.

So expect 2020 to go out with a bang, a ton of dangles, a few snipes, and some premium cellies. And hopefully by the time 12am hits, the boys will be celebrating heading into 2021 with a matchup against Slovakia as the 1-seed in the quarterfinals on Saturday. Grab some cold ones, get your ass on the couch, and let's fire up this live blog.

(Also, make sure to follow along on Twitter @JordieBarstoool for live updates/highlights throughout the game. I'll be updating the blog after each period here)

You couldn't have asked for a better start for Team USA. Like I said, Sweden was probably a little gassed from last night. The last thing the Americans would want to do is let them hang around and get their legs under them. So what do these beauties go out and do? Get pucks on net.

Drew Helleson (COL) throws a puck on net from that weird Patrick Kane/Sidney Crosby angle and it squeaks backs Alnefelt. Tough goal for Alnefelt to give up, but they all look the same on the scoreboard. Huge goal to put Sweden on their heels early, and a few minutes later it was Big Z continuing to dominate the shit out of this tournament.

Trevor Zegras (ANA) has been a total monster so far this tournament. He was Team USA's best player in last year's tournament, and for my money he's been the tournament's best player so far this year. Aside from Tim Stutzle, I don't know who else you could put in the same conversation as Zegras. 6 goals so far and he doesn't look like he's slowing down anytime soon. Kind of reminds me of Troy Terry a little bit in the sense of having a Ducks prospect being an American World Juniors hero.

Holy fuck are the boys buzzing or are the boys buzzing? They came flying out of the gates early to start the 1st period, and they decided to run it back for the 2nd. First up it was Ryan Johnson (BUF) going full American Sniper after a huge offensive zone faceoff win to keep the foot on the gas.

Clean faceoff win. Clean dish from Zegras. Clean snipe to the back of the net. And just a couple minutes later it was Alex Turcotte (LAK) finally getting himself on the board here doing the thing that Team USA does best--get their ass to the front of the net and fill the back of the net.

And what made this goal an even bigger dagger than it already was is the fact that Sweden had a missed penalty shot less than 30 seconds before this goal was scored.  A penalty shot that could have made the game 3-1 and given Sweden a little life, but Victor Soderstrom does this.

Now the only thing that I'm slightly worried about is that Sweden was up 4-0 against Team USA in the 2019 tournament. Then the Americans pumped in 4 straight goals in the 3rd period to send the game to overtime. They eventually lost, but still. 20 more minutes here to buckle down and get themselves 3 points with a regulation win. Keep the foot on the gas, boys. Don't get cute, go for the kill.

Not much to talk about in the 3rd period but that in itself is a great sign. It shows that not only can this USA team build up a lead, but they can play with a lead, too. I'll be honest--I was expecting way more of a push out of the Swedes in the 3rd period, and was expecting them to be throwing everything they had at the US. But Team USA did a great job at controlling the pace, stepping into gaps in the neutral zone to make sure that Sweden didn't get a ton of chances to set up offensively, and Spencer Knight was great in net. Hardly any rebound chances for Sweden at all last night, so Spencer Knight clearly has corrected himself after that Russia game.

So the boys buzzed, the buzzed some more, and now they're heading into to the quarterfinals as the top seed out of Group B. They won't have to face Canada until the gold medal game as long as both teams take care of business. Hell of a way to close out 2020. Fuckin' rights,  boys.

Thanks for following along all night. I love you guys and wish all you beauties all have a killer 2021. Have yourselves a night, and let's hope we keep this shit rolling until January 5.