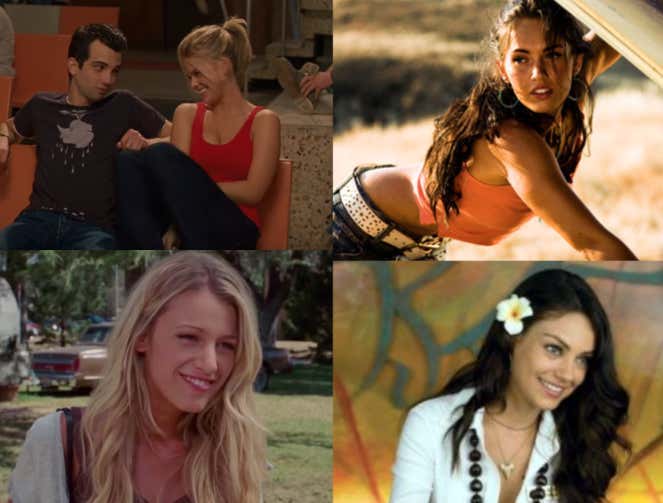 So earlier today I woke you up with Blake Lively's character Monica Moreland in the most underrated movie of our generation Accepted. She is in my mind the most perfect female character ever created. There are no flaws as far as I'm concerned. Now considering I wrote the blog at 2am, some pointed out that I failed to really describe what makes her so perfect. Sometimes it's hard to describe perfection, especially when you can't keep your eyes open. When you see it, you just know. A lot of you chimed in with your own versions of the perfect female character so I'll get into a few of those for you guys as well. First let's talk more about Monica because there's literally nothing else to do right now.

Monica is just everything. Her only mistake is dating that douchebag Hoyt to start the movie, but once she catches him cheating in the act it's curtains for him. All in favor for Hoyt to be murdered for even thinking about choosing someone over Monica say I. I. Okay cool let's move on.

Blake Lively at 19 years old portraying a college student was a complete rocket ship. Today she's transformed into a goddess, but back then as I watched this movie as a 13 year old she was the hottest person I've ever seen. Her personality, her looks, even her hobby for photography is sexy despite it probably leading to no money in the future.

Let's flash back to the first time her and Bartleby hooked up (what a train wreck of a name by the way). She makes the whole situation easy on him because she's the best. I think every guy out there leading up to the first kiss has wondered if the other girl actually wants to put her lips on theirs. How could someone want to willingly do that? Monica flat out says "you want to kiss me now, don't you?" as they lie on his dorm room couch. That line just lifts all the pressure off of Bartleby and allows him to fly in with no fear. Why can't all girls do that instead of making us jump through a million hoops and read all of the signs? Monica Moreland is the one, folks. She's loyal, drop dead gorgeous, and as nice as it gets. To me she sits atop the throne as the sole perfect female character in movie history.

Naturally the internet disagreed with me (very rude by the way) and had their own answers. Here are your acceptable responses that don't quite beat Monica Moreland, but are allowed to be in the running.

Alice Eve in She's Out Of My League

Her willingness to date a guy like Kirk, even if it is to play it safe for a change, is very commendable. The way she commands the table at Kirk's family's house is brave. She doesn't fear much and isn't afraid to be the lead dog. When Kirk tells her that he came in his pants right before meeting her parents she laughs it off rather than being disgusted. She's a fantastic woman no doubt, but I do have one gripe. Too many people know who she is and have dated her. When they go to the Penguins game the players say hi when they get slammed against the glass and see her. That shit would fuck with my head. Also webbed feet is crazy. Not a deal breaker by any means, but did Monica have webbed feet? No she did not. For that reason I'm giving the nod to Blake Lively here, but it's admittedly close.

Megan Fox is an absolute weapon in Transformers. Coincidentally she's originally with Hoyt from Accepted to start this movie too. That guy is just a type cast for douchebag boyfriend that eventually gets dumped huh? Anyways Mikaela is phenomenal in this classic and was a generational smoke for many of us. I don't love how she didn't know who Sam was despite sharing classes together their whole lives. I guess I can relate a lot with that with my own personal experiences.

Mikaela is all sorts of hot in Transformers and is fearless towards the end of the film when she helps defeat the Deceptacons. I do find myself intimidated by her entirely and would be terrified to say a word at any given moment. Blake Lively and Alice Eve's characters are at least approachable and I could see myself striking up at least a "hello" before walking away in total embarrassment. Mikaela feels like she would punch me in the face before I could get a word out. Not perfect.

Cam from Good Luck Chuck is gorgeous. She means no harm of course, but the destruction she brings upon herself with her bad luck is something I just can't be around. I can't win a bet as it is. If I were around her I'd be bankrupt and living on the streets in weeks. Still a rocket and a sweat heart, just not better than the cream of the crop listed above.

Rachel Jansen is adorable. She's everything that Sarah Marshall isn't. The perfect girl to remind you that there is hope in the world. Honestly she's a sneaky pick here and you could give me an argument, but I'm not wavering off Monica Moreland. I'm just not.

Who else did I miss? Remember we're not just judging looks here. That would be barbaric and unethical. We're talking perfect female characters who you'd love to run away from the rest of the world with. Abandon your family and just start over with. The comment section is back, let em rip.