I saw this tweet and got an itch. I knew what had to be done, but I had to reach out to the tiering authority here at Barstool Sports and ask for his blessing first before I could continue on my quest. 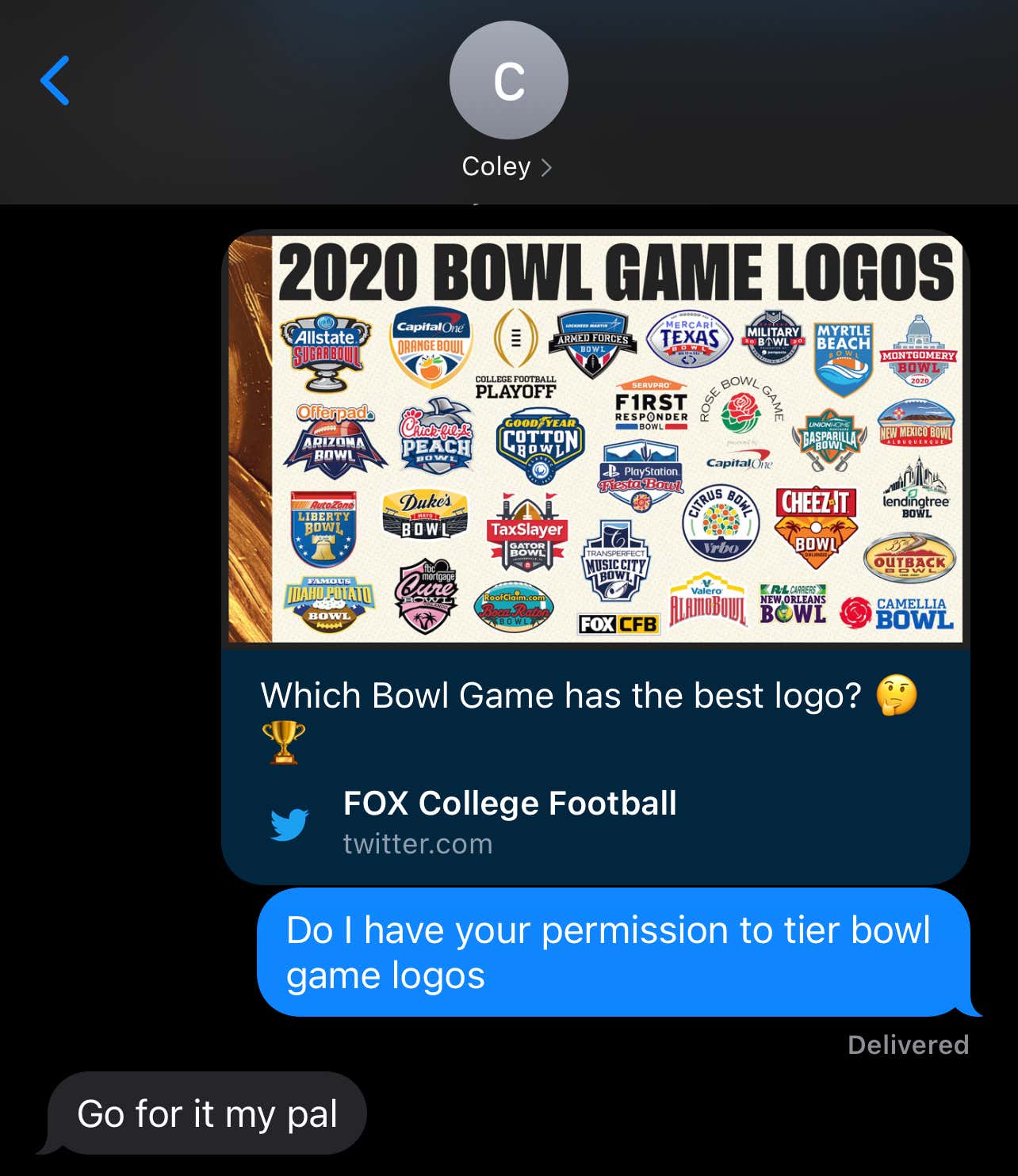 And we were off.

With many of these games not even being played this year, this was a fun exercise to be able to experience some of the magic of bowl season. Even if the Tony the Tiger Sun Bowl can't be completed this season, we are still going to debate the merits of its logo alongside its companions. So without further ado, here are the tiers.

You will notice as we go along that there is generally a strong correlation between how much money goes into these football games and the quality of their logos — although shoutout to the Famous Idaho Potato Bowl for making it into the S Tier alongside some heavyweights. Anytime you can make a football double as a baked potato, you've done something right.

I thought long and hard about having this tier be solely the Chick-fil-A Peach Bowl, because it is the clear-cut winner in terms of bowl game logos. It's simply the perfect sponsor and local artifact combo for a football game. But I liked the Sugar Bowl enough to put it in there as well, and I knew the olds would be heated if the Rose Bowl dropped into the A Tier, so we added a few more at the top. But make no mistake, the Peach Bowl has the No. 1 spot. The Cheez-It Bowl is mostly here because of the rest of its branding as the perfect embodiment of bowl season.

In the A Tier, we have our other three New Year's Six bowl games as well as the Citrus Bowl and a few other games which managed to punch above their weight class in terms of logos. It sucks that the Fiesta Bowl has been relegated to second-tier status since its sponsor switch to PlayStation, because the old Fiesta Bowl logo would certainly be in the S Tier and likely take over the top overall spot. But as things stand now, it is alongside the Cotton and Orange Bowls and the premier games which did not make the cut for the top logo tier.

But then we also have the Duke's Mayo Bowl and Union Home Mortgage Gasparilla Bowl — two of my personal favorites — which made their way above the other games of their ilk. Obviously anytime you're talking about bowl games sponsored by mayonaisse and a pirate festival, those are going to be great logos.

All fine logos in their own right, there just isn't that "wow" factor anywhere in this tier. The Gator Bowl falls into the same category as the Fiesta Bowl, where a recent new sponsor took its logo down a notch — and originally changed the name of the game entirely to just the TaxSlayer Bowl, which was a dark time in that bowl's history.

The Outback Bowl and Pinstripe Bowl have the potential to move up into the A Tier in the future with just a little bit of re-working. There is certainly potential in this tier, which is probably more than I can say for the games we have left.

Every one of these is just "meh." The best thing I can say about these logos is that as I was going through, my thought for all of them was, "I guess they're not bad enough to be in the worst tier." At least the Tony the Tiger Sun Bowl tried something different here. Everything else is about as basic as you could possibly be. Playing it safe usually doesn't result in greatness.

These logos stink. There's simply no other way to put it. I want everybody to look at the Frisco Bowl logo and tell me how long it took to come up with that masterpiece. And then the New Mexico Bowl is horrible on the other end of the spectrum, because there is way too much going on there. Every one of these logos would make me ashamed to get the bowl sweatsuit with these on it if I was a player.

ESPN is paying plenty to televise these games. Fix your logo.