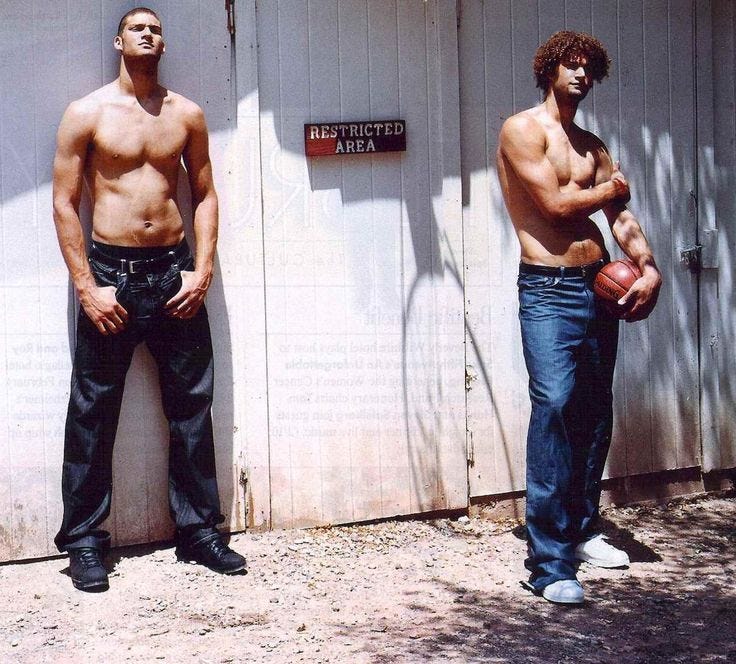 So Robin Lopez was introduced as a member of the Knicks yesterday, while Brook signed a three-year max contract to stay with the Nets.  And verbal shots were fired from both sides.  And by shots I mean jokes from 7-foot nerdy, basketball-playing twins.  First we had Brook doing a Q&A with Joe Benigno and Evan Roberts on WFAN.  Some highlights from his interview below:

Q: Did you help recruit your brother to the Knicks?

A: I did help recruit my brother to the Knicks, but as a non-Knicks supporter, I helped recruit him there.  I think he’s going to be a detriment to them.  Absolutely.

Q: You have always gotten the better of him in head-to-head matchups.  So maybe that’s another reason, right?

Q: Will you guys consider living together in New York City?

A: I’ve been telling a few people I think I am going to go the, I’m going to first off charge him rent definitely.  I’m going to kind of go the Harry Potter route.  Like the Dursleys kept Harry Potter under the staircase in the cupboard.  Something like that.

Q: Is there anything Robin Lopez does better than you?

A: He loses better than I do, I know that.  That came to me right away.

So we already had a Harry Potter joke and a Superman joke in the first interview.  In fact, we were one “Han shot first” zing away from the Nerd Holy Trinity.  And while twins usually freak me out, I like that there were some actual jokes scattered in there.  Tiki and Ronde always seemed like they were a couple of minutes from open mouth kissing each other when they did interviews.  So hopefully the Lopez brothers are the taller, nerdier, but not nearly as awesome version of the Ryan twins.

Later on, Robin was introduced as a member of the Knicks. 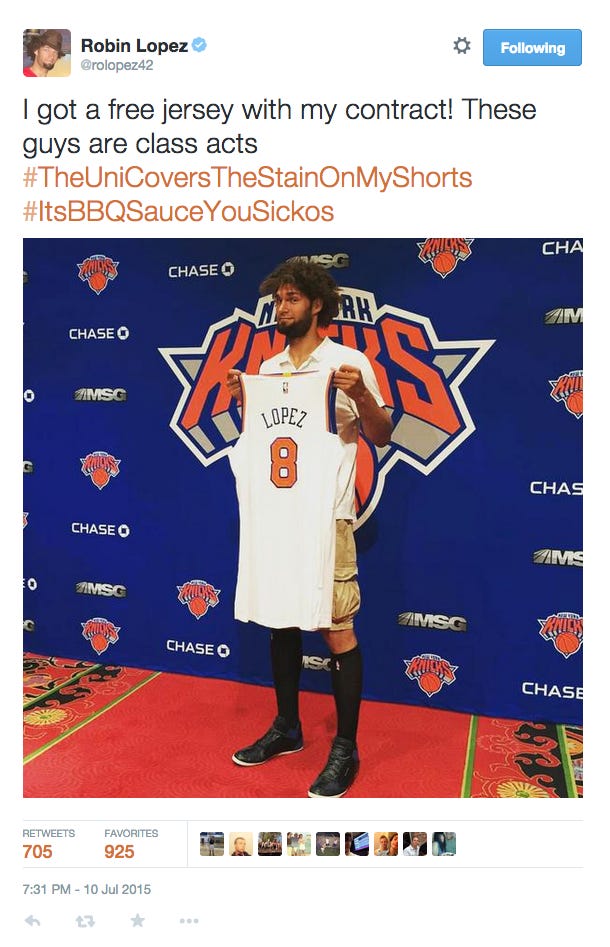 Jesus Christ, Robin.  I know I am in the minority here, but I like cargo shorts.  And I think you just killed any chance of them ever coming back.  And while nothing beats a fresh pair of NBA socks, the combination of tall socks and cargo shorts is wayyyy too awkward for the fashion capital of the world.  That being said, I do respect a good poop joke in the tweet.  I think we definitely have a chance to be fast friends, you tall weirdo.

And I love that he picked the number 8.  In the last 15 years, that number has been worn by players like Latrell Sprewell, Danilo Gaillnari, and J.R. Smith.  This ensures that while Robin Lopez may not be great, he will be entertaining, whether it’s on the court or on the blog.

RoLo also responded to his brother’s Harry Potter joke with a zing of his own. 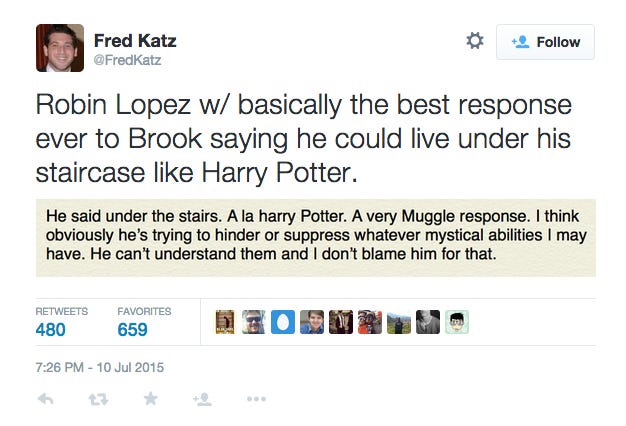 Haha, take that Brook!  You fucking Muggle!  You don’t even understand your own mystical abilities, fucking idiot!  (I have to now read all the Harry Potter books to understand what these two nerds are talking about, huh?  Shit).

Robin then talked about whether or not he is going to continue rivalry with mascots in New York. 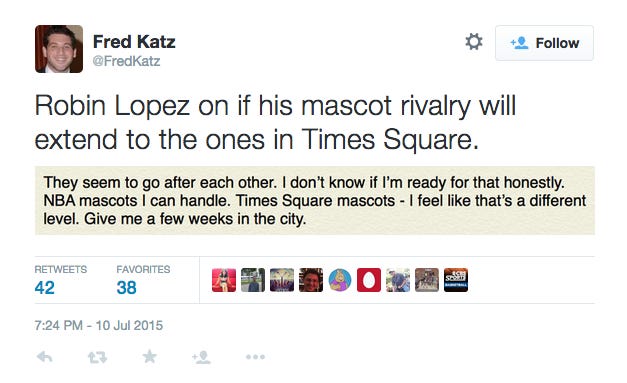 Yeahhhhh, Robin.  I would probably pass on that.  While it’s all good and fun fake-fighting guys making $10/hour in a mascot suit in front of 20,000 NBA fans, getting into a scuffle with some Spanish dude that smells like piss while begging tourists for tips in an Elmo suit is not the best idea in the world.  Because after JPP blew off a digit during the Fourth of July, the Headline of “Knicks Center killed after being shanked by Minnie Mouse and Cookie Monster in Times Square” doesn’t seem like such a reach anymore.

Now if you will excuse me, I have to go inside on this beautiful summer day to get ready to watch Kristaps Porzingis’ Knicks debut in a Summer League game.  #blessed 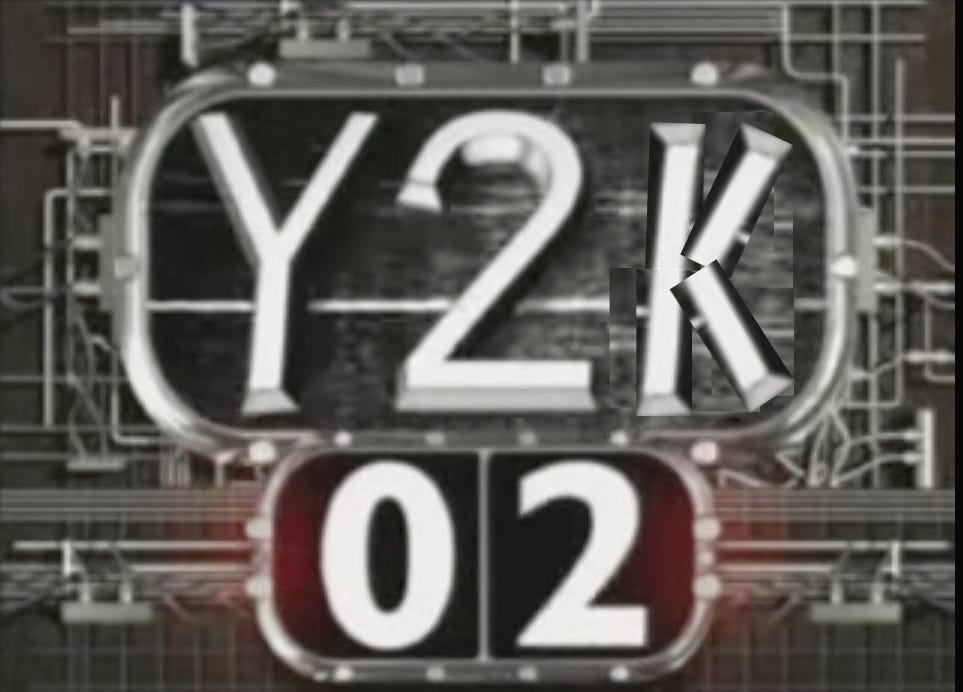