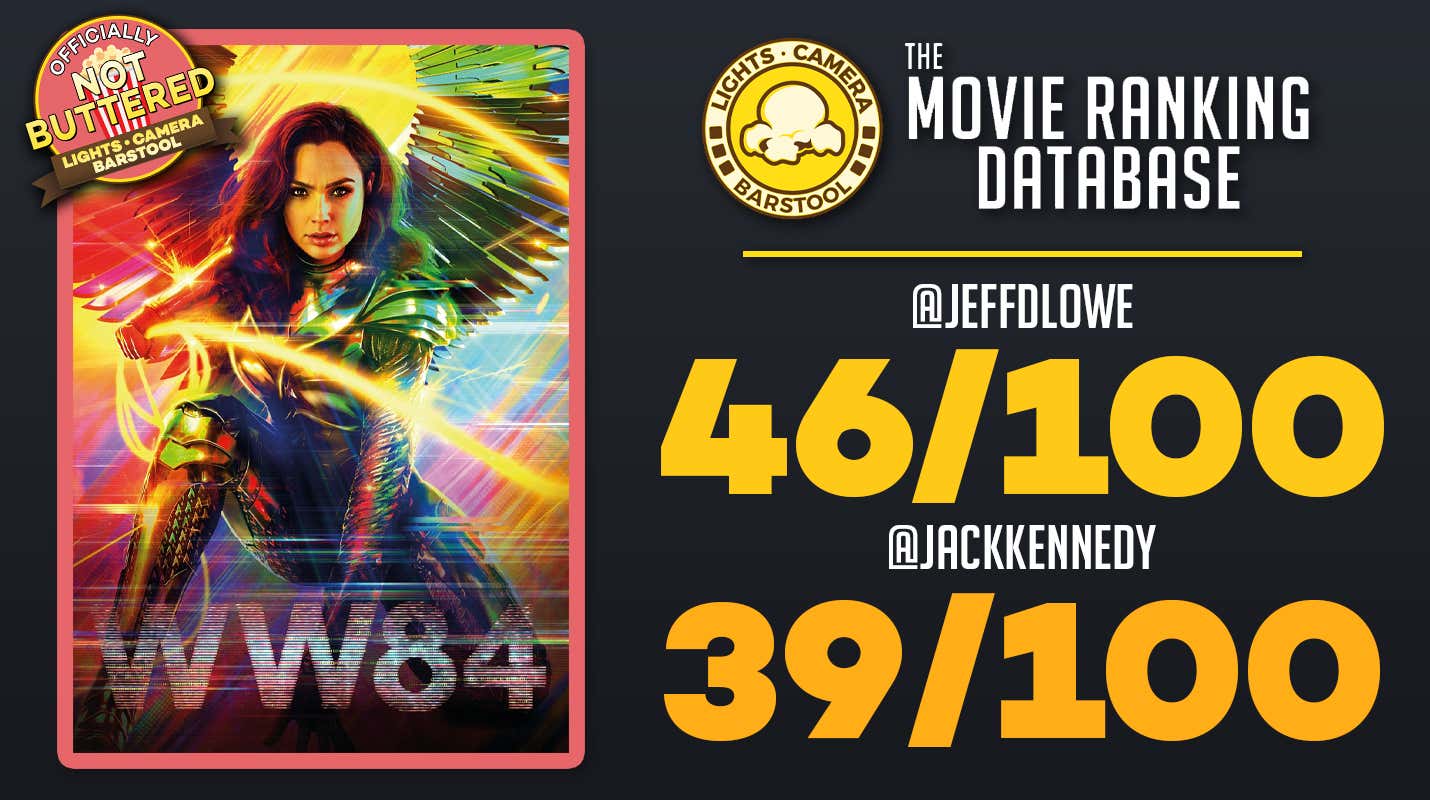 SPOILER ALERT FOR THE MOVIE

Diana Prince lives quietly among mortals in the vibrant, sleek 1980s -- an era of excess driven by the pursuit of having it all. Though she's come into her full powers, she maintains a low profile by curating ancient artifacts, and only performing heroic acts incognito. But soon, Diana will have to muster all of her strength, wisdom and courage as she finds herself squaring off against Maxwell Lord and the Cheetah, a villainess who possesses superhuman strength and agility. (via Wikipedia)

KenJac (39/100): More than anything else, this movie is pure frustration. It is boring and poorly paced, but it’s most egregious sin is that it repeats almost the same exact mistakes that held the first movie back. How! How do you not learn and change the biggest complaint about not only your previous movie but your comic book movie universe as a whole?! To me, that is unforgivable.

From an acting perspective, this movie is PAIN. To start, I simply don’t think Gal Gadot is a good actress. She has charisma and a solid presence, but she struggles a LOT. She hurts this movie a lot by underdelivering in emotional moments and making expositional moments seem a lot more exposition-ey. Chris Pine isn’t really given an opportunity to do shit and is sort of just a vehicle for “wow things are different in the ’80s!” jokes. Kristen Wiig and Pedro Pascal suffer from misuse as well, with neither given an opportunity to really shine while somehow also pulling away all the focus from the person we’re there to see, Wonder Woman.

From the technical end, there are a number of problems with the biggest being that the movie is boring as all hell. Pretty much the one thing you want to see out of a good superhero movie is action and this movie is STARVED of that. The worst part is that we do get some, it really looks like shit. Like, amateur-level CGI shit that looked like a step backward from the original movie. There is one particular scene where she saves a pair of kids in Egypt that looks like a rotoscoping effect from ‘Spawn’.

The slow pacing makes the lack of action even worse. If you think that the moments that lack action would focus on character development, you’d be wrong. The best we’re offered is Diana having to struggle not to be selfish, which is probably one of the better parts of the film. The whole ethos of greed and power and how they corrupt people is actually a solid core, but everything surrounding it (The mantle and the crust? I don’t know, I didn’t pay attention to earth science) is pure shit. Mostly because Cheetah and Maxwell Lord are underdeveloped characters that are eerily similar to General Ludendorff and Ares from the first movie.

The biggest problem with the first movie is that those two villains fucking sucked, the CGI one (Ares) looked like shit, and were not compelled by them. The only real difference between Ares/Ludendorff and Cheetah/Maxwell Lord is that instead of being one-dimensional bad guys, they’re three-dimensional bad guys that inexcusably follow parallel arcs to each other. HOW DOES THIS HAPPEN?! The DCEU has a clear villain problem that has been pointed out and criticized by casual movie-goers and DC fans alike. PUT MORE THOUGHT AND CARE IN YOUR VILLIANS!

There are so many scenes that were unnecessary (The opening Olympics scene, what are we doing here? Origin movie number two?) and made this movie either longer or more complicated than it needed to be. I’ll give it credit in a few areas, though. Like I said before, I do enjoy the core idea of it as far as greed/corruption. I also was afraid going into this that Maxwell Lord was going to be a very thinly veiled shot at Trump but I think director Patty Jenkins toed the line jussssst enough in that regard. I also really liked a lot of the 80’s set pieces. It took advantage of that over-saturated color palette that we’ve all been creaming our pants over while looking just unique enough to be its own thing.

To sum up: We basically already grade Superhero movies on a bit of a curve. Nobody is expecting some A24 arthouse shit or Oscar-worthy grandness to it. BUT, Skip Bayless, we want to be fucking entertained by them. This movie is not nearly entertaining enough. Wonder Woman is a badass character and deserves better than what she got here.

And to be clear, nothing about this sequel warranted the third movie that they announced yesterday.

JeffDLowe (46/100): 'Wonder Woman 1984' is a boring, bloated sequel to an awesome original movie that never finds its footing amidst a messy and convoluted story. While the villains in 'Wonder Woman' were the movie's biggest weakness, they never really took away from the main character and her impact on the story. The sequel can't seem to avoid that problem, as I was left feeling as though Diana Prince was not the real focus of the movie after the two action-packed opening scenes.

A sequel desired by many after the success of the original movie, 'Wonder Woman 1984' was so fucking sloppy and the tone was set in the first third of the movie.

Without spoiling too much, following a flashback scene of Diana as a kid learning a lesson about never taking shortcuts or cheating (which I am not sure they ever properly paid off, and if I missed it I might just be dumb) and a pretty awesome mall heist scene, the movie just sort of… levels out? Nothing really happens of note and the story never seems to introduce a lick of notable conflict. Now, don't get me wrong, I love movies and shows that are more slices of life and aren't always about "something," but we all know what to expect with a comic book movie. And I'll say the same about long movies, I love them! I eat them up! There is nothing quite as great as getting lost in a long story and different world for a while, but 'Wonder Woman 1984' was just simply too long. Both of those problems were on display in the first hour of the movie, and I can't really blame anyone who gave up before the movie really got going.

The issue? Once the movie got going, it just continued to be a poorly paced, sloppy mess. Scenes felt either drawn-out, emotional payoffs felt unearned, and the action scenes, which were incredible in the first movie, were dull, drab, and largely disappointing. Following a memorable end to their story in the first movie, the return of Steve Trevor and his reunion with Diana registered at a near-zero for me on the emotional scale. Aside from one sequence involving fireworks over Washington D.C., nothing outside of those two opening scenes felt remotely notable, especially in comparison to something like the "No Man's Land" scene in the first movie. 'Wonder Woman 1984' just never seemed to be able to get out of its own way.

As per usual with most DCEU movies, villains were also a major part of the problems in 'Wonder Woman 1984'. I was okay with the performances from Pedro Pascal and Kristen Wiig, but the former's character overshadowed the entire movie, and the latter carried the cliched "out of nowhere" motivations we see far too often out of weak and thin comic book movie villains. This is a Wonder Woman movie, but she shared far too much screen time with villains who should play second fiddle to the emotions of her character and story. Did we really need two villains again? The answer is a big fat no.

Layered into all of that is the thing (literally a thing) that drives these villains to their breaking points. Most comic book movies are based around a MacGuffin or a "thing," but the artifact behind the motivations and moments in 'Wonder Woman 1984' was overly complex and weird, almost goofy at times. The way in which they explain the item and what it does (I won't spoil it), and how it is woven into the story just feels cheap.

What saves the movie from being truly terrible and awful, like as bad as 'Batman & Robin', was the chemistry between Gal Gadot & Chris Pine. There is just enough to lift this about the complete dumpster for comic book movies. But how they released an overly long sequel to a beloved movie yet still managed to not give us enough of what we want, Diana Prince & Steve Trevor, is baffling to me. Their combination on screen, coupled with enough positives in the visual aspects of the movie, and the music (thank you, Hans Zimmer) gave the movie somewhat of a heartbeat.

I've rambled on long enough. These reviews are never meant to be more than a quick look at our thoughts, but my goodness was 'Wonder Woman 1984' a letdown. They've already greenlit a sequel, a third Wonder Woman movie that hopefully focuses more on the actual character of Wonder Woman.

EDIT: I forgot to note that the 1980s theme also felt completely useless and unnecessary. It was there for references and really just that. We are guilty of doing the whole "remember this!?' nostalgia bit on our podcast all of the time, and the 1980s setting felt like an excuse to just remind people of memorable shit from that era at various points during the movie.

--
The movie is Not Officially Buttered, with both myself and KenJac giving the movie bad scores. You can head to Lights Camera Barstool right here to listen to our latest episode where we reviewed 'Soul' and filled out Trillballins' Rejected Baby Yoda Names Bracket.