Complex - Most people think they have the greatest taste in music, but a new bot from the Pudding is here to prove that no one's perfect when it comes to taste.

Standing in direct contrast with the celebratory nature of Spotify Wrapped, which offered music listeners a chance to reflect on their most-listened to music in 2020, How Bad is Your Spotify aims to critique all the choices you made this year. Whether that's calling you too trendy for keeping up with new releases, or asking if you're okay following your 900th listen-through of Frank Ocean's Blonde.

Created by Mike Lacher and Matt Daniels, the AI really doesn't mess around when it comes to insulting your taste. The site will ask its users to pick "fuck, marry, kill" three of their most-listened to artists.

So this was making the rounds last week on the twitter and people were posting the best disses this thing churned out.

You can process your own by CLICKING HERE, it takes two seconds and actually is kind of funny.

I'm sure the Russians now have access to my bank accounts and social security number but I stopped caring about important shit like that a few months ago. So who cares? Let this thing scan your listening preferences and talk shit. 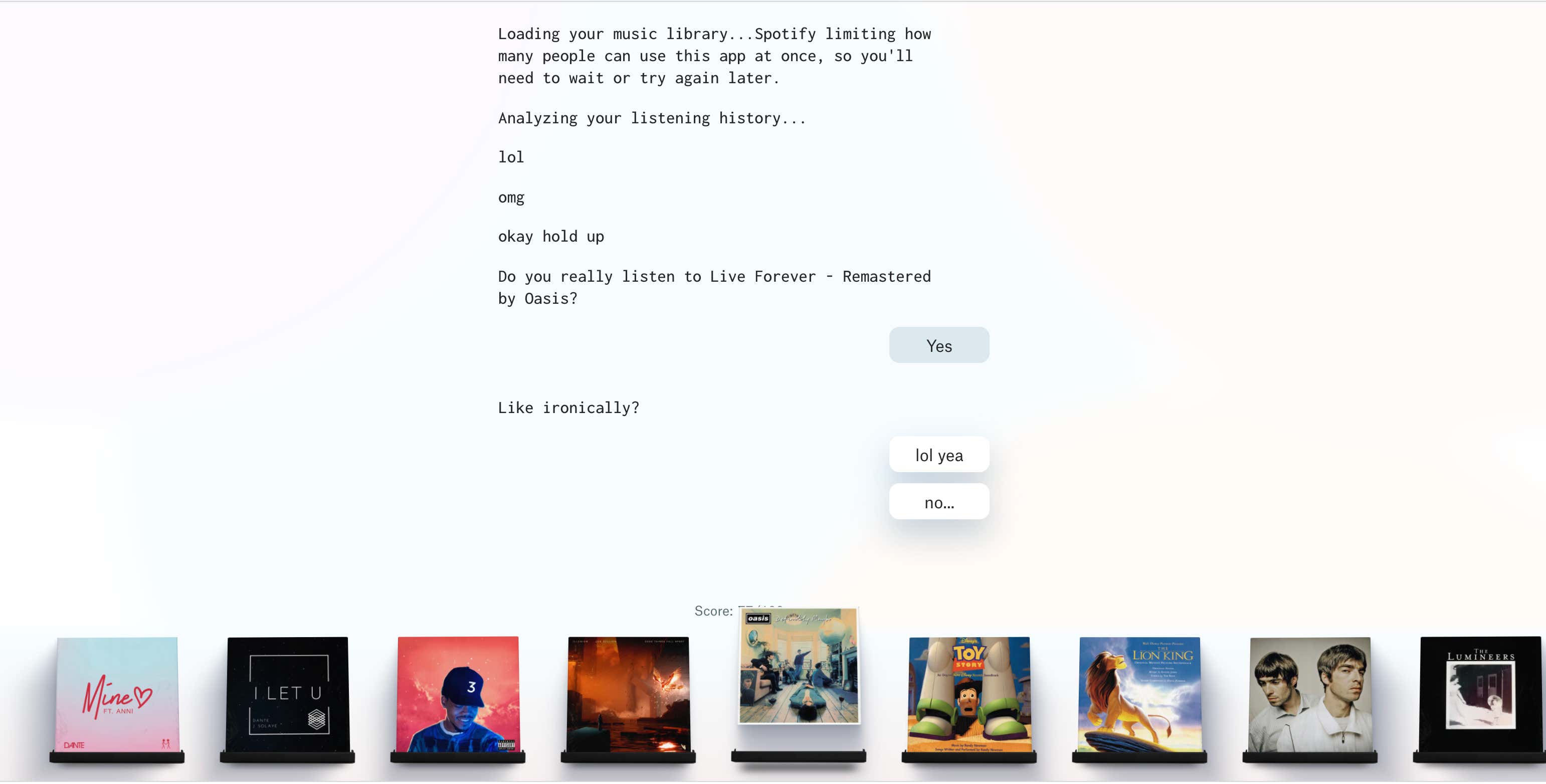 Hot start by this asshole piece of A.I. (Is that the correct term?)

Taking it right to the body going after one of my all-time personal favorites.

Do I listen to "Live Forever" ironically? No motherfucker. It's an incredible song.

Good thing it bit its tongue on Motown. In my opinion, the greatest genre and era of music in our species history. Show me a person that claims they don't enjoy Motown music and I'll show you a liar.

Lumineers are a dark secret of mine. I really enjoy their stuff even though I'm not a hipster and don't hate my parents.

I am triggered by the whole "Fase Stan" part. Just because I looked him up one time because my Mexican friend told me about him and he does Latin music that doesn't sound like everything else out right now doesn't make me a stan of the guy.

The Taylor Swift part? Obviously. Girls been on a tear dropping new stuff for the past 15 months.

As for the asking "Are You Okay?" part I gotta admit I laughed. Well played A.I. 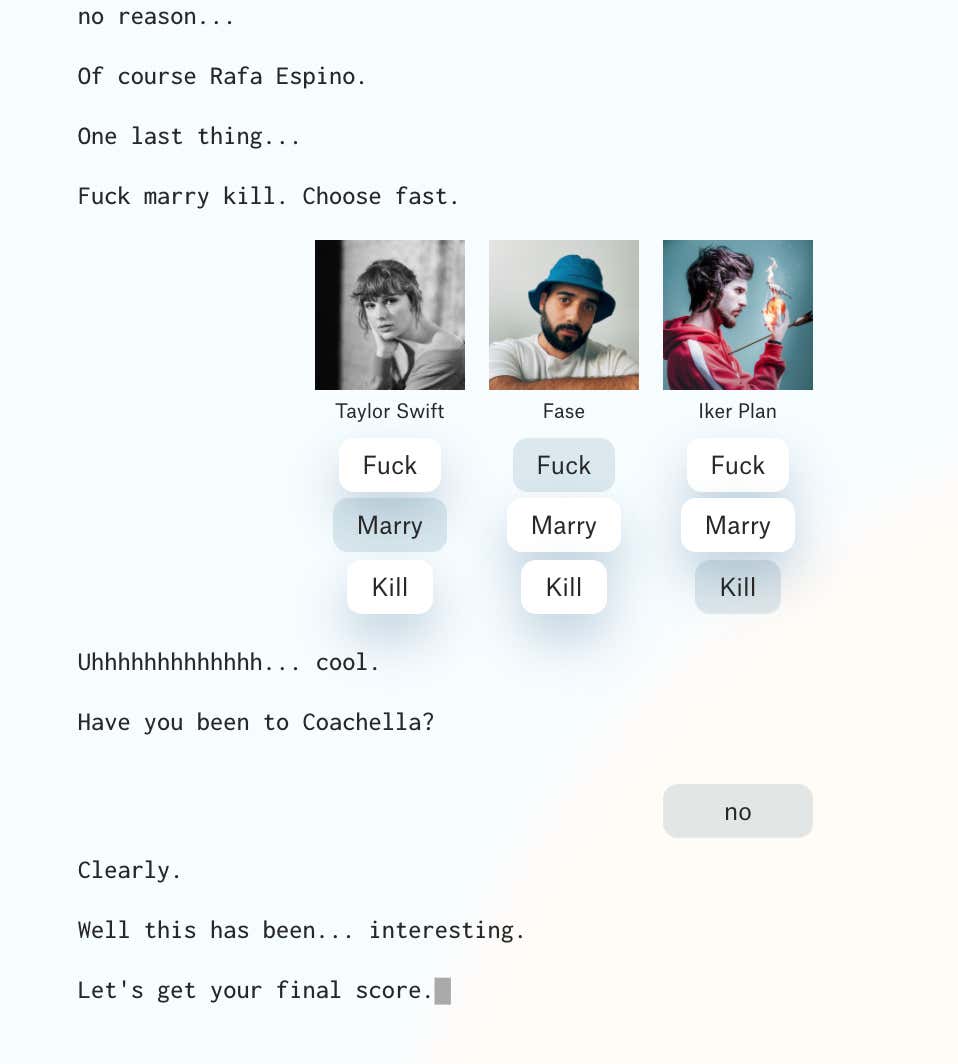 1- Iker Plan? Who the fuck is that? Upon investigation -

I can honestly say I've never once listened to this guy in my entire life. I am beginning to wonder if I have a spotify hack like KFC experienced and somebody's just been mooching off my account.

2- I fucking hate Coachella and everything associated with it. So I could not have answered no quick enough. 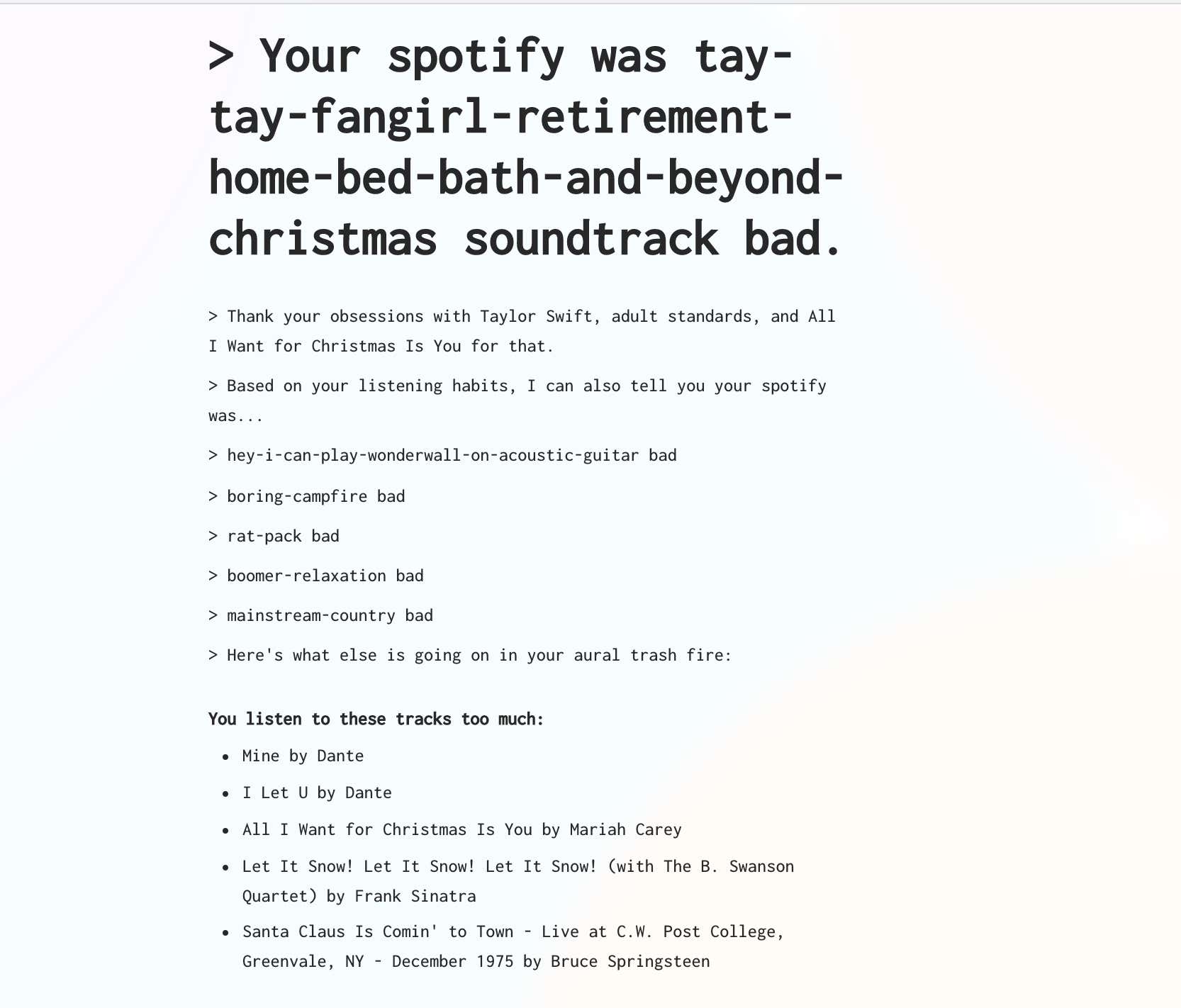 Love the shameless shout out for my two tracks -

And those are three monster Christmas songs so I stand by them proudly. 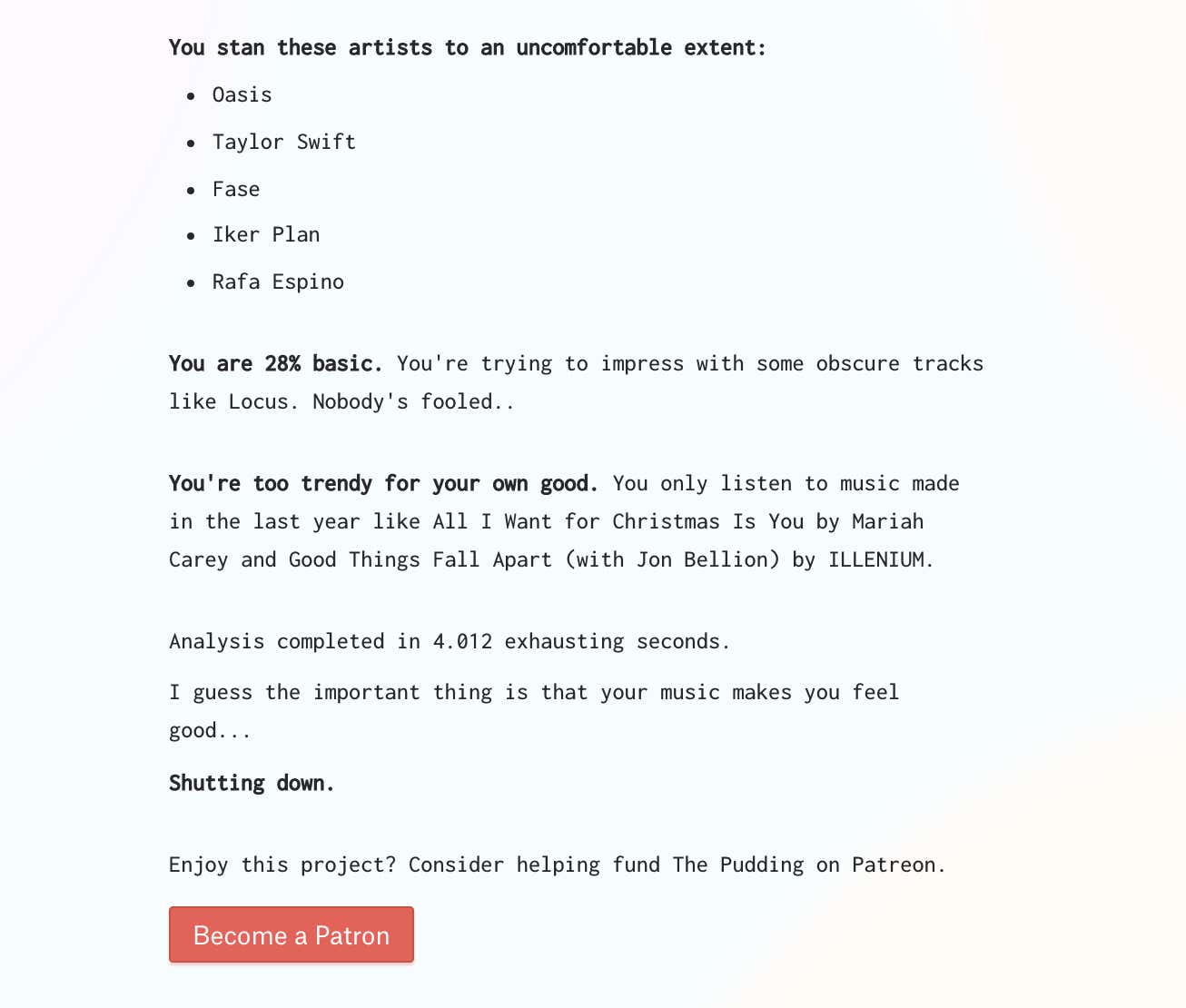 Ok so 3 of my top 5 favorite artists are Latin? There is definitely a bar back mooching off my account I haven't been aware of.

Or is it a Eurotrash bathroom attendant? Locus? WTF?

At least it ended with a song that's definitely one of my most played, Illenium & Jon Bellion - Good Things Fall Apart (one of the best songs of the last 5 years)

Dave sent the following screenshot over after running his through it. 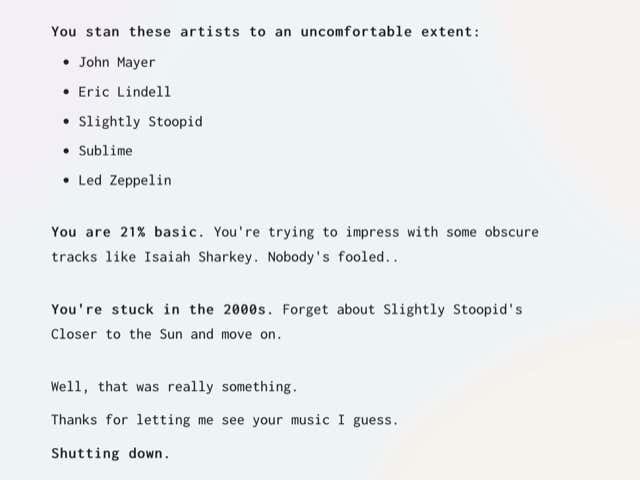 Pretty solid list for WSD if we're being totally honest. And truthful.

Every time I get in Dave's car Slightly Stoopid is currently playing or comes on within the next 3-4 songs. He's almost as big a fan of theirs as Jake Arrieta.

I also wasn't familiar with Isaiah Sharkey but am glad I am now.

"I don't have a spotify"

"I do not have a Spotify either." 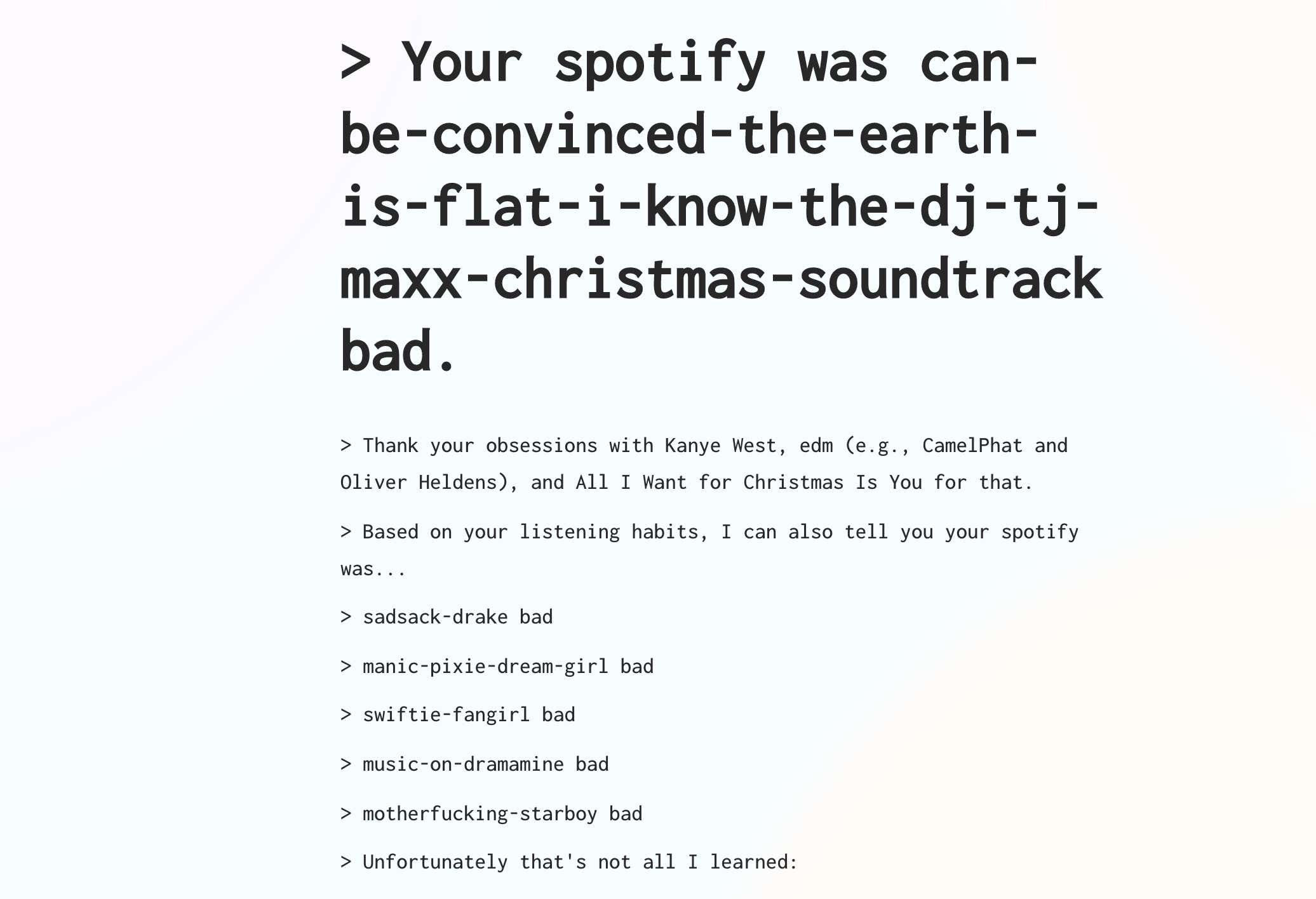 Let's break it down. 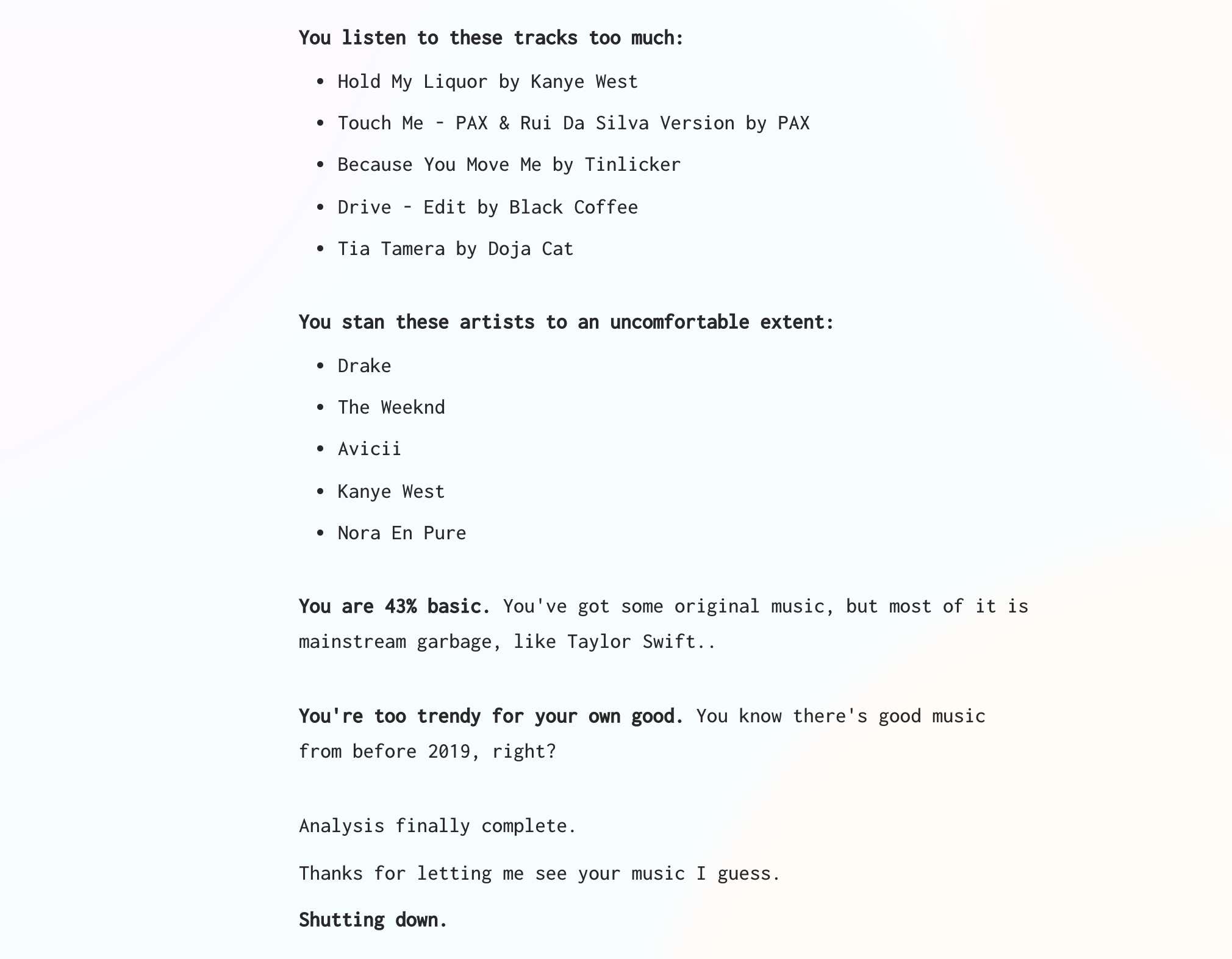 Terrible song off a terrible album. "Hold My Liquor" is what happens when you get a dozen "yes-men" in a room with a maniac who layers autotune over a vocoder and throws in some reverb for the hell of it. And everyone tells him it slaps.

And the "Stanning" of Nora En Pure I had no idea Tom was such a deep house head. Kinda dig it. Another layer to the mystery cameraman I didn't see coming.

The other guys still call him an intern but I feel like he outworks most people in the company so that title isn't appropriate.

"I don't use spotify either"

I was really looking forward to Chief's list. He put me on to Sturgill Simpson in 2018 and seems to prefer artists from off the beaten path.

TRY YOUR OWN HERE