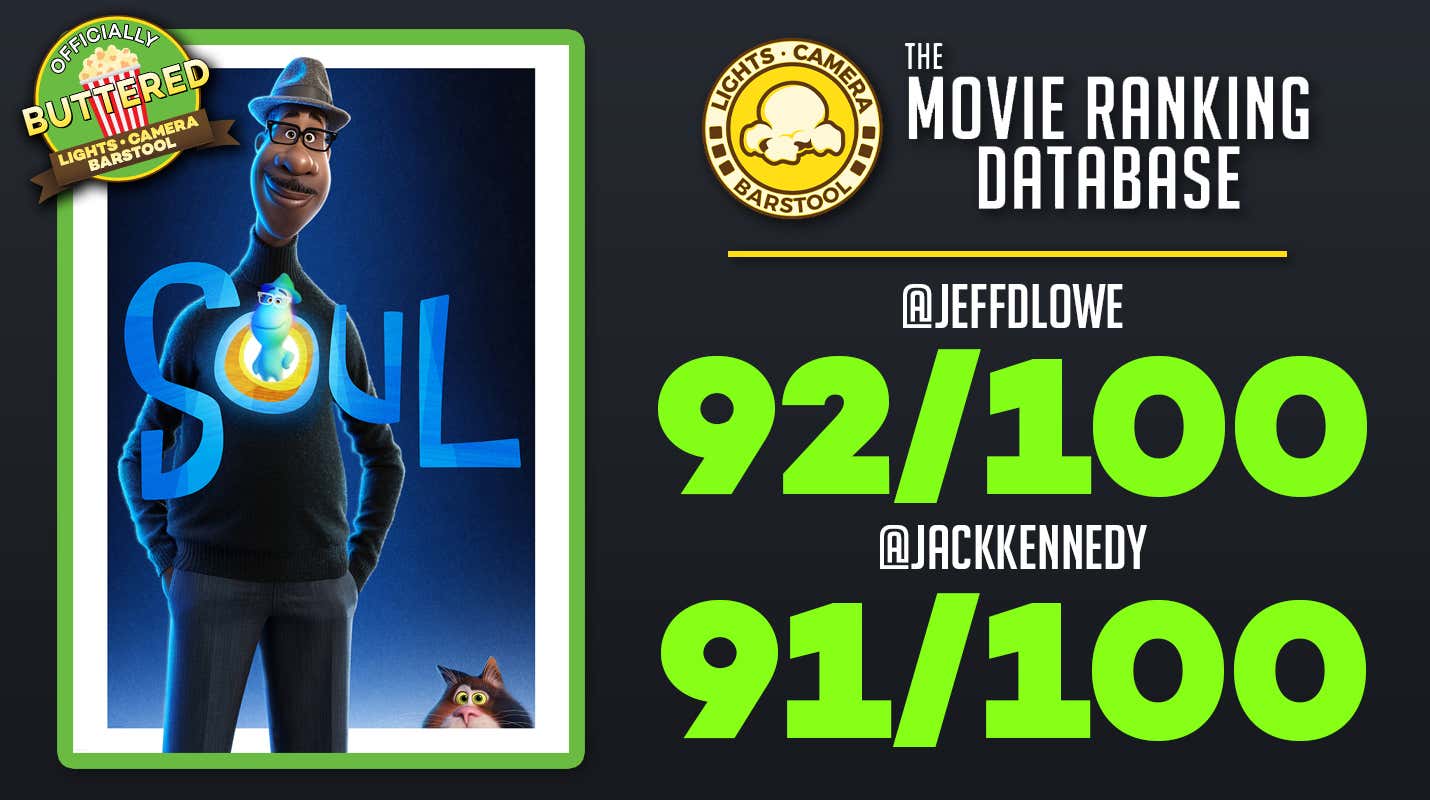 Pixar released two movies in 2020, something they don't do very often, or at all, and while 'Onward' was a solid release, 'Soul' was the heat you expect from the animation giant.

Joe is a middle-school band teacher whose life hasn't quite gone the way he expected. His true passion is jazz -- and he's good. But when he travels to another realm to help someone find their passion, he soon discovers what it means to have soul. (via Wikipedia)

JeffDLowe (92/100): With possibly their most "adult" movie to date, Pixar's 'Soul' delivers a thoughtful and touching message, but wrapped up in a more uplifting and comedic way than usual. Where most Pixar movies might whack you over the head with moments that bring you down emotionally before building you back up at the end, 'Soul' stays fairly consistent in trying to just raise your spirits from the start, but not at the expense of a message that should resonate with everybody.

There is such an impressively thoughtful touch with 'Soul' that feels both familiar in comparison to Pixar's best movies, but also unique in terms of the tone of the story. Don't get me wrong, talking about souls, sparks, mental health, and life purposes are not light subjects, but they manage to tackle them in a much softer way than the movie's counterparts such as 'Inside Out', or 'Coco' and 'Up'. And when I say this is the most "adult" movie, I don't mean that as a bad thing. From the characters to the themes, and right on down to the comedy, it's a movie that I am not sure will resonate all that much with younger kids. But I think that was Pixar's intention, they wanted to make a movie that dialed back a bit on the complexity of the message, and went for more of an on-the-nose approach to speaking with a more adult demographic.

When it comes to the look of the movie, I'd be stunned if people weren't impressed with Pixar's usual stunning visuals. As much as ever, especially with human characters, 'Soul' carries on the tradition of the "Pixar look" where it seems uniquely in between being animated and live-action. It's a visual marvel and brings home fantastic music thanks to a score from Trent Reznor and Atticus Ross, a duo usually attached to David Fincher movies.

My only complaint with 'Soul' might be the fact I felt as though the character a 22, voiced wonderfully by Tina Fey, didn't feel quite as fleshed out emotionally within the story. But I also realize that could be a byproduct of the approach from Pixar with the movie, which I'm confident seemed to be the avoidance of the crazy up and down emotional swings. Outside of my one real gripe, Jamie Foxx & Tina Fey were great in their voice roles, bringing a ton of life to their characters. All of that can also be said for Graham Norton as Moonwind, and Rachel House, Alice Braga, and Richard Ayoade as the Terry and Jerry characters in the Great Before.

The movie is great on its own, but it carried a message I think we can all appreciate, especially in 2020. It's a movie that will age well and forever carry a message that should help lift people up and take a step back to look at their own lives, but the added element of when this movie was released made it hard to not crack a big smile when it finished. 'Soul' might not carry as much weight as the best of the best from Pixar, but this unique approach from the company paid off as the movie is one of the year's best.

KenJac (91/100): I think that I had a reasonable idea of what Soul was all about before going into it just based on the trailers and synopsis, etc. I don’t feel like it was the movie that I expected, but it was a movie that I really liked. It was thoughtful, it hit a lot of familiar notes while also offering something unique and it gave you the Pixar feeling at the end of it despite maybe being the least Pixar-y movie you’ll watch.

From a voice acting standpoint, Jamie Foxx really delivered and gave a lot of life to the character of Joe. I didn’t totally love Tina Fey, but the Jerrys, Terry, and Moonwind were really great. Especially Moonwind but that’s mostly just because I love Graham Norton. If movie studios are listening, that is the TV host to put in movies.

From a technical standpoint, I really like how this movie looked. The depiction of the great before was familiar because things look texturally similar to Inside Out, but also different in how the environment was presented. I don’t know for sure, but I think that childish and simple look makes the concept, which is inherently a little complex and dark, a little easier to comprehend and digest for the younger audience. While that world is great, the real people and real setting in New York also looked flawless. It reminded me almost of ‘If Beale Street Could Talk’ with the supersaturated fall colors that really take you into that fairytale new york and not the real new york which is disgusting.

I wish a little more care was put into the character of 22 because she was basically the copilot of the plot but I don’t feel like she was really fleshed out. That’s really my only big complaint. Other than that It is a great movie that to me first in that to me is right near the S-tier of Pixar movies.  It leaves you feeling some stuff you’re not used to with a Pixar, melancholy is the word thrown around the most, but also some that are.

--
The movie is Officially Buttered, with a few high marks from myself and KenJac. You can head to Lights Camera Barstool right here to listen to our latest episode where we reviewed 'Soul' and filled out Trillballins' Rejected Baby Yoda Names Bracket.