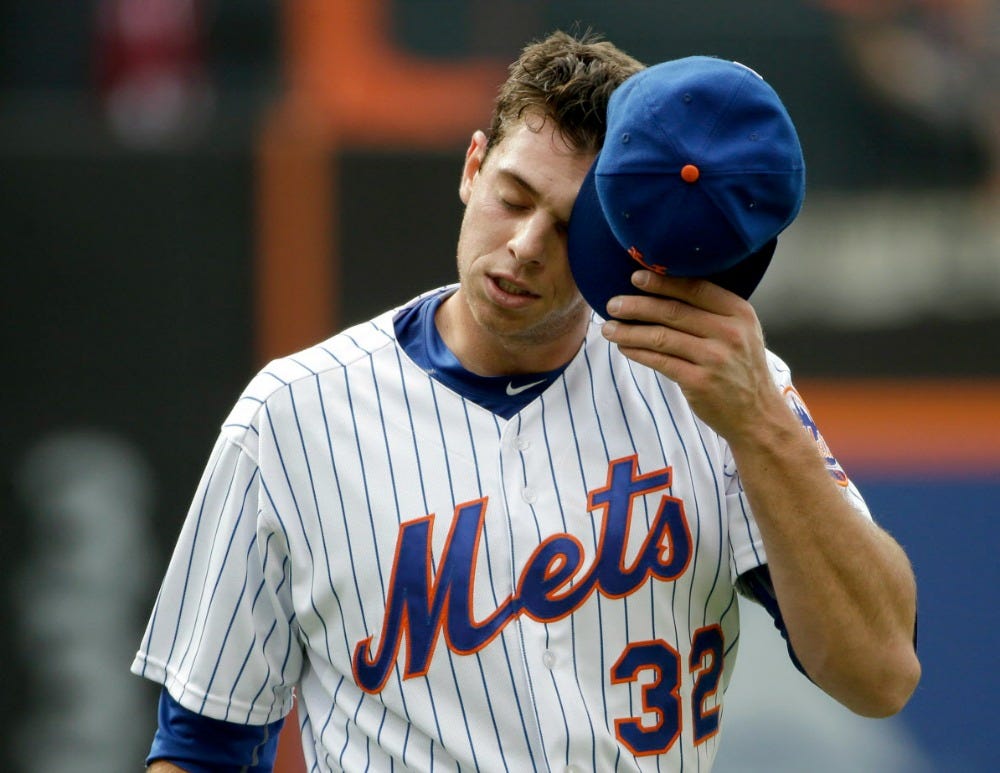 NY Daily News-  Steven Matz has a partial tear of his lat muscle on his left side. He will be out at least three weeks, the Mets announced Thursday. Sources told the Daily News that the big lefty could actually be out “several weeks.”  Matz, who was examined at the Hospital for Special Surgery on Thursday, was given a platelet-rich plasma (PRP) injection, which doctors use to try to promote healing in muscles and tendons. He will be re-examined by team doctors after the three-week shutdown.

Son of a bitch!  Take two series in a row from the Dodgers and Giants on the road and then get completely blindsided by news like this suuuuuuucks as we are about to head into the All Star break.  Matz has been everything Mets fans hoped for on the mound and even better at the dish, which makes this a doubly whammy.  Because for some reason, this year’s putrid offense would turn into the 86 Mets every Sunday during a Matz start and Mets fans would actually wake up not wanting to kill themselves on Monday morning.  But apparently the baseball gods didn’t like that happening and quickly turned the tables on us again.

Now I know it’s hard to blame a medical staff for pitchers getting injured.  It’s just the way it is.  You hear people say all the time that pitching isn’t a natural motion and all that stuff.  But I mean, the Wilpons have to fire Ray Ramirez, right?  When your head trainer has botched as many treatments over the last decade as Ramirez has, sooner or later something has to be done.  This is not how fans should be reacting to the head trainer of a baseball team.

Their applause should sound like the applause the kids that nobody really knows or likes get at graduation.  Just politely acknowledging their existence until the people that actually matter are announced.  Instead Ramirez got the biggest boos at this year’s Opening Day.  That is insane for a head trainer.

And I mean, this graphic says it all.  You can go back to around the time he became the head trainer in 2004 to see this type of shit happen every season.  The Hospital For Special Surgery is basically a punch line for Mets fans now.  It’s the place you take people if you want them murdered.  I call Ramirez #DrDL on Twitter for a reason.  Because when the player first gets hurt, everything is fine.  They tell you the player will avoid the DL.  Then the player goes on the 15 Day DL. Then he goes on the 60 Day DL.  All because Ray Ramirez is a buffoon who is snaking it til he makes it/murders the entire Mets team.

Finally, has anyone told grandpa Matz about the injury yet?  Because whoever does that needs to be very delicate with how they drop the news to him.  The old man could barely contain himself on Matz’s 4 RBI debut.  I don’t need him dying on me once he finds out Ray Ramirez is about to get his claws into his grandson.