I’ve spent the bulk of my Make-A-Wish journalism career scouring Twitter’s nooks and crannies for the biggest and rarest fossilized fecal matter that I could furiously blog about under the guise of unfazed irony. With my face progressively achieving the hue of an Alabama jersey and the dampness of the co-ed who gets to wear the practice version home, I’d violently smash the keys of my sweat-stained MacBook and unleash every fluid ounce of my ire on my least favorite Twitter trends and people, hit publish, rinse and repeat.

Then I stopped. Maybe it's because I developed new interests or maybe it's because I pivoted my focus to ANUS, but I stopped exerting so much negative energy on such a shitty social network. Blissfully ignorant to the worst thoughts and opinions from the worst people in the world, my overall happiness skyrocketed, I adopted a sweeter disposition, and now I hate myself for it.

A few days ago, I officially realized I needed a change of pace when my timeline solely consisted of pleasantly-worded debates about Young Thug and Jay-Z's discographies from people who've attended more cotillions than barbecues. So I got to digging... 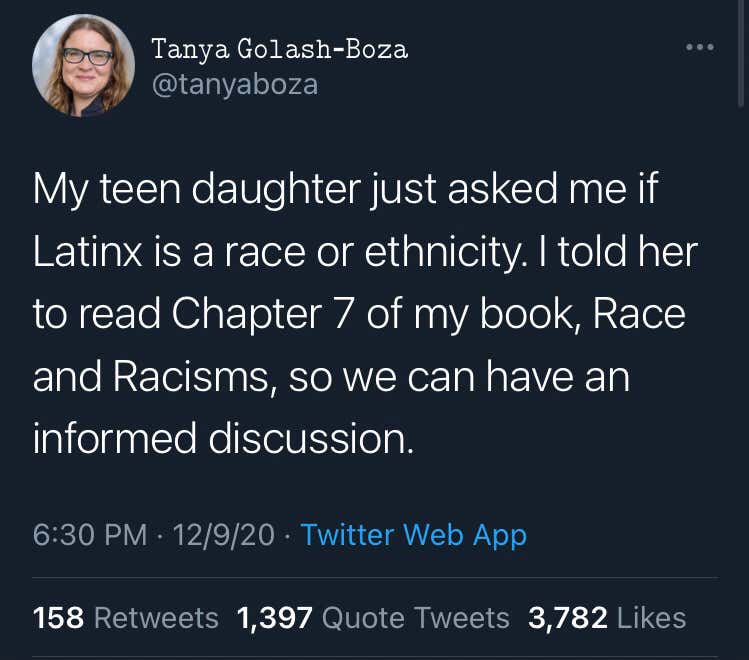 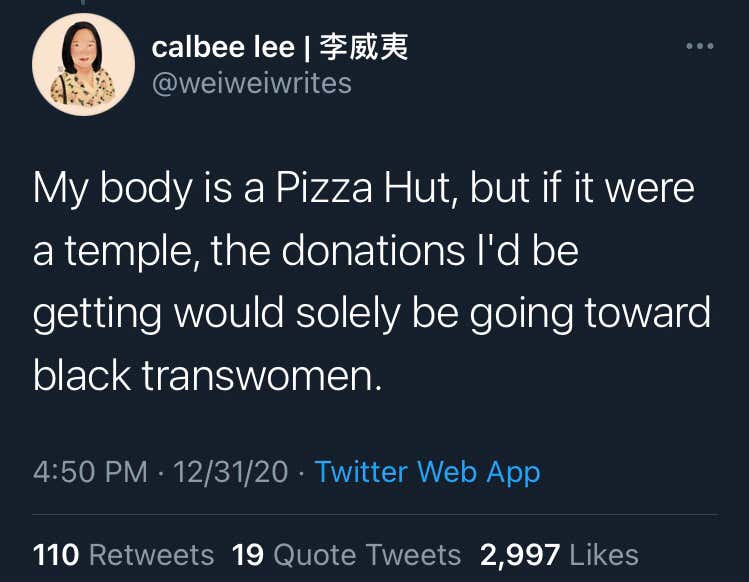 I quickly found exactly what I was looking for, but surprisingly didn't feel any anger at all. Instead, I was amused. Amused by the unchecked delusion and performative lengths that humans are starting to reach just to "outwoke" each other online. We talked about it on A New Untold Story, but I honestly think we're on pace to see people try so hard to be woke activists and "allies" of the oppressed that they unintentionally confirm the Horseshoe theory and devolve to just straight up being racist. 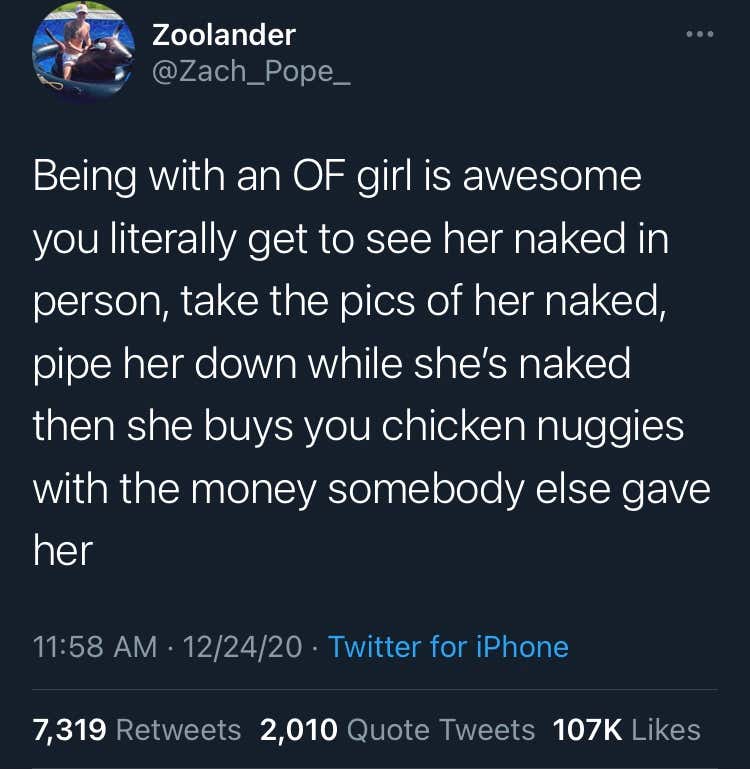 With that said, let's break down the benefits of being with an OnlyFans girl, as told by the Pope himself.

1. You literally get to see her naked 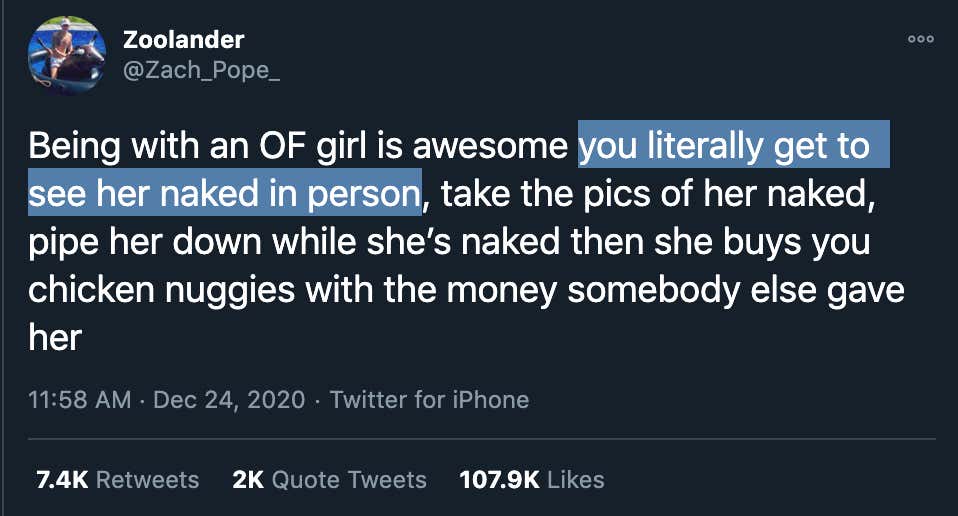 I can't stress this enough: Literally getting to see your own girlfriend naked in person — as opposed to virtually, metaphorically, or not at all — is one of the unique perks of dating a woman with an active OnlyFans account. And believe me, the moment your professionally nude sweetheart shows you her naked body in real life for the first time....well, "surreal" would be an understatement.

Like a soldier returning home and seeing his wife for the first time since they met 4 months ago, or Captain Cons returning home to a wooden platter of exotic cured meats and cheeses that require extensive googling to identify, the thrill of finally getting to see your OF girlfriend nude in person is indescribable. The same bare breasts and glistening clit that you’ve only ever gotten to witness in two dimensions for two hundred dollars a year, right before your very eyes. While other dudes desperately pay for nips like they have a transcontinental flight in fifteen minutes, you get to see her full areolae free of charge: the montgomery glands, milk duct orifices, everything...Guys with conventionally employed girlfriends would kill to be in your shoes. You’re the king that other peons strive to be — the sentient subject of their sexual fantasies.

2. You get to take the pics of her naked 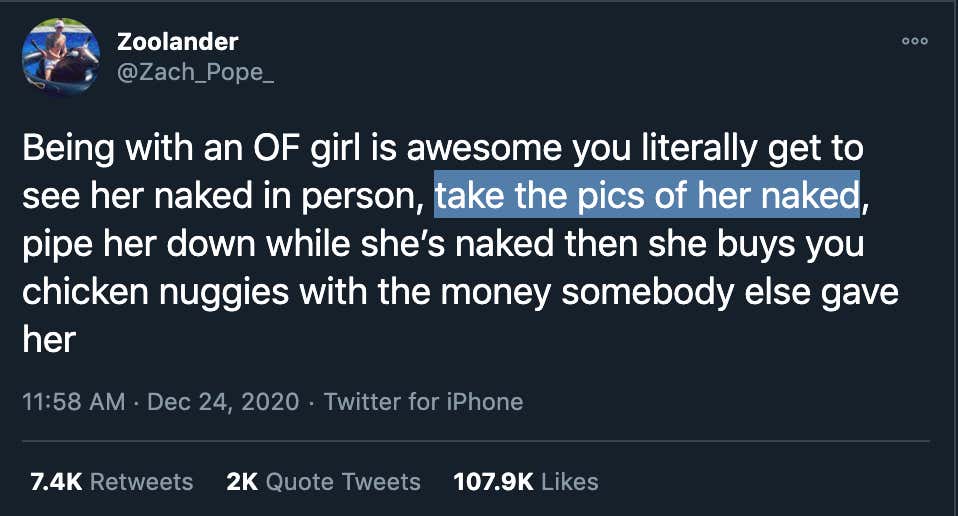 Like Annes Geddes stumbling into a delivery room and encountering her first newborn baby, or Anthony Weiner stumbling into his underwear and encountering his first erection, you can barely fathom how lucky you are to yield a camera for such a special circumstance. You not only have the power of seeing your darling's naked body in person, but you have the privilege of photographing it too. You lucky motherfucker. A guy like you? Getting the opportunity to painstakingly snap all the photos that other fellas will only get to look at from the comfort of their bedrooms and bathrooms? If dicks could talk, yours would say Bazinga!

I'd like to imagine Zach Pope trying and failing to mask his intimidation as his brand new girlfriend's voluptuous vulva stares at him menacingly like the sandpit monster from Return of the Jedi. With his trigger finger trembling and his nervous jitters on the Richter scale, he can't even keep his hands still enough to capture a picture of her pussy that isn't blurry. "Relaxxx babe, it won't bite," she says to him reassuringly before ultimately replacing him on camera duty with her unbathed ketamine dealer who has "photographer" in his Instagram bio.

3. You get to pipe her down while she’s naked 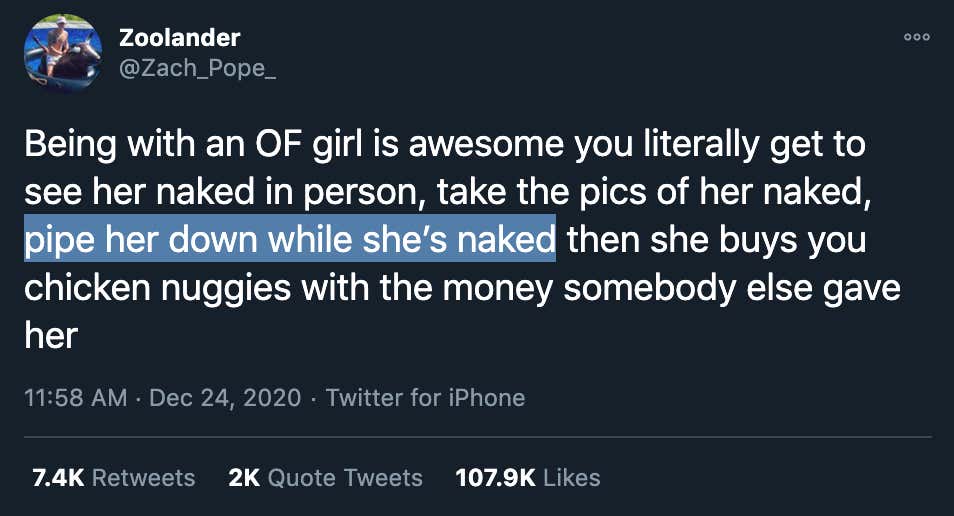 This sentence fragments reads like an undercover Darren Rovell trying to build rapport with a 5 star high school football recruit by pretending like he’s ever had sex with anyone other than, and including, his wife. But it’s even more special than that...

I’ve always said there’s nothing better than piping down your own girlfriend while she’s fully fucking naked, as opposed to, say, piping her down while she dons a scarlet pantsuit with a slit in its crotch and cosplays as Hilary Clinton after winning the Iowa Caucus.

I’d like to imagine Zachary Pope fluffing himself to the hardness of a block of lukewarm Monterey Jack while he patiently waits for his OF girlfriend to get done with (start?) work so he can finally fuck her... Wiggling his ornery wiener into her prized pussy like he’s feeding cotton twine to a leopard gecko, then closing his eyes and trying to achieve ejaculation by envisioning the delicious mechanically-separated poultry his breadwinning beauty will reward him with when coitus culminates... 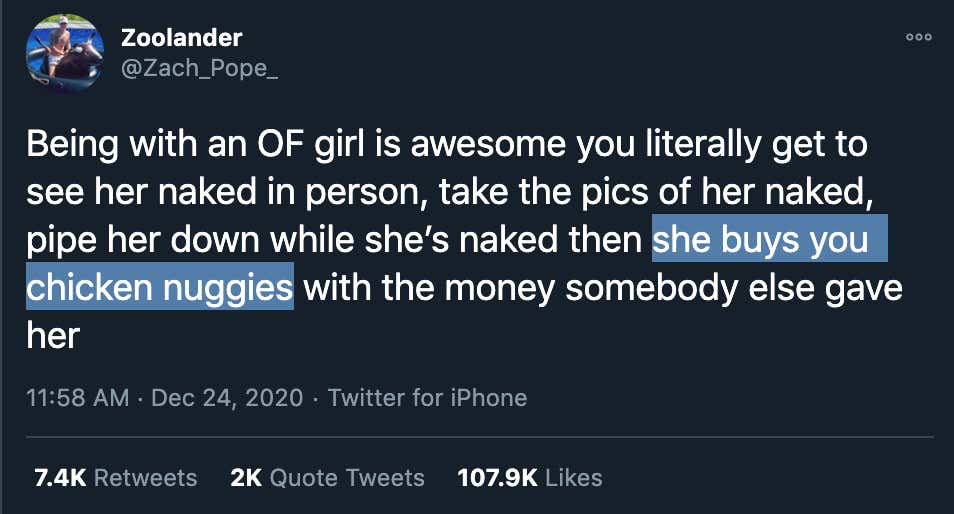 Do me a favor and say “nuggies” out loud. Go ahead; take your time if you have to. You couldn’t, huh? It pained me to even produce that “word” textually. My iPhone was so embarrassed for me that it tried autocorrecting “nuggies” to a slightly less offensive word with similar consonant placements. Despite all that, you’re still jealous, aren’t you? While Mr. Pope nibbles on his Glenny Balls-funded fast food toddler meal in the backseat of his girlfriend’s Fiat 500, remember this: No matter how many different naked photos and/or videos you get to see of her, you'll never be able to call her your girlfriend or pipe her down while she's naked.

And neither will he. 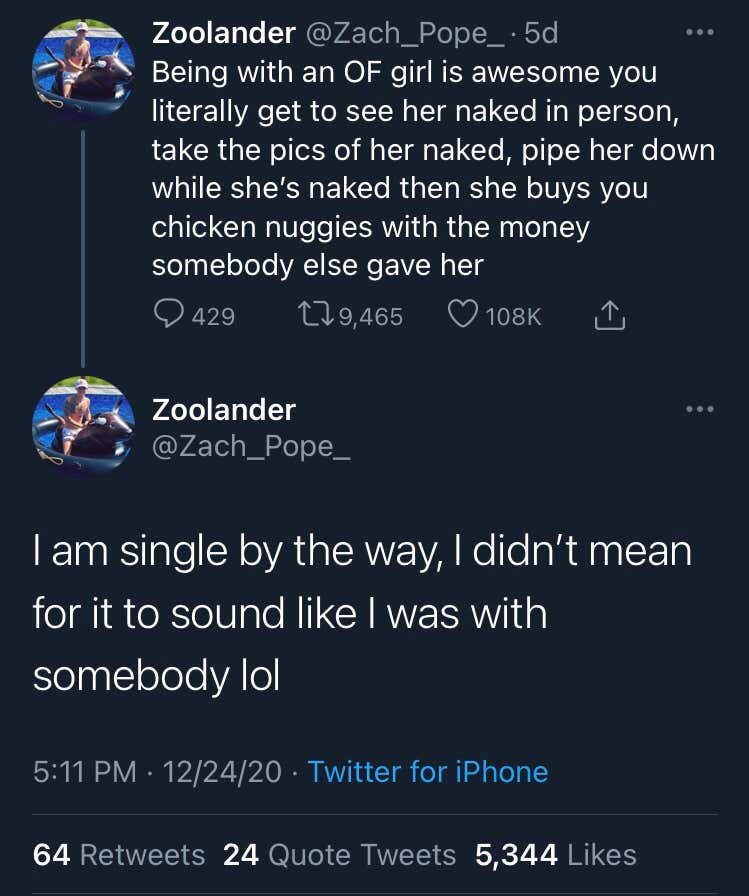 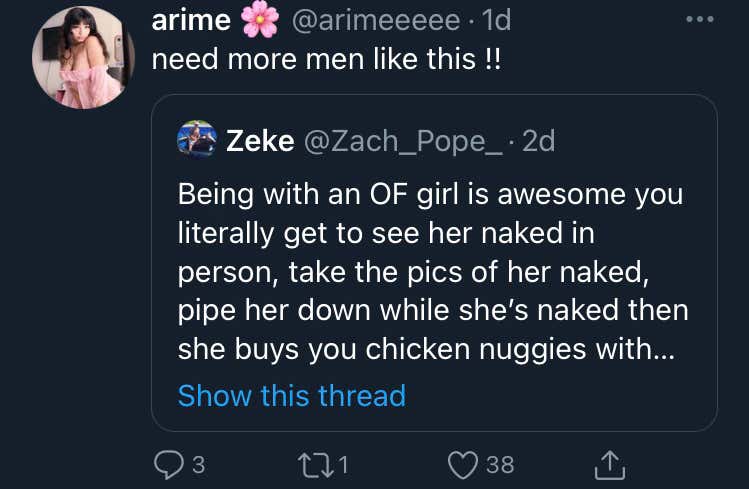 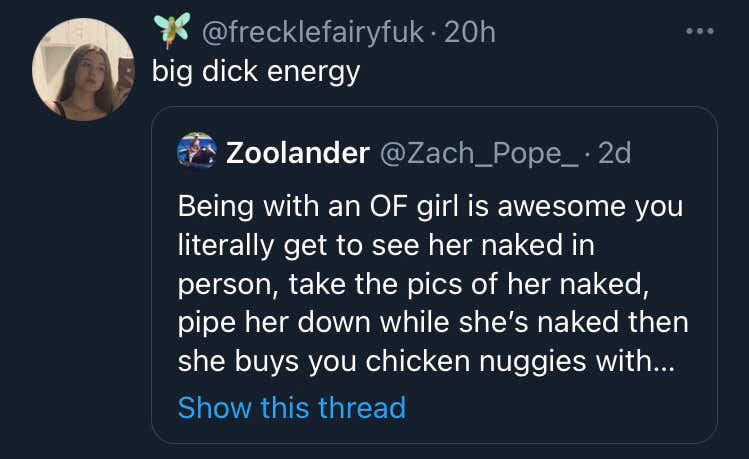 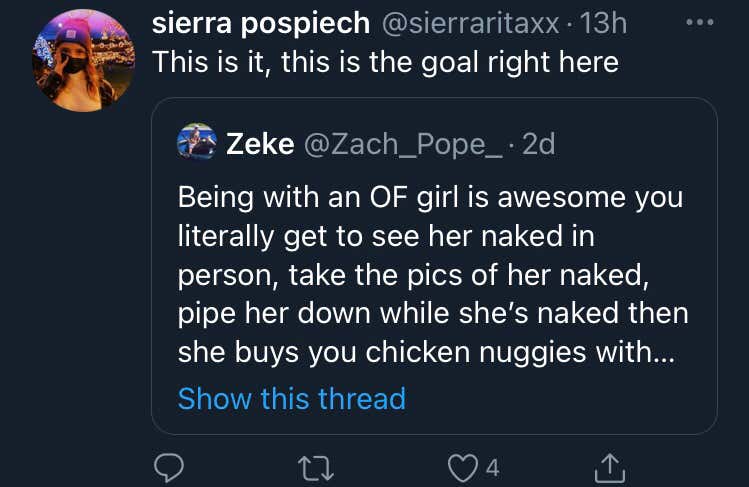 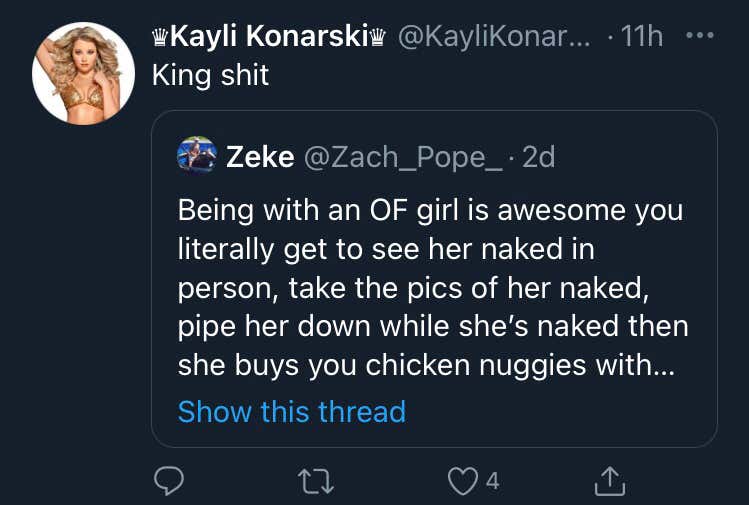 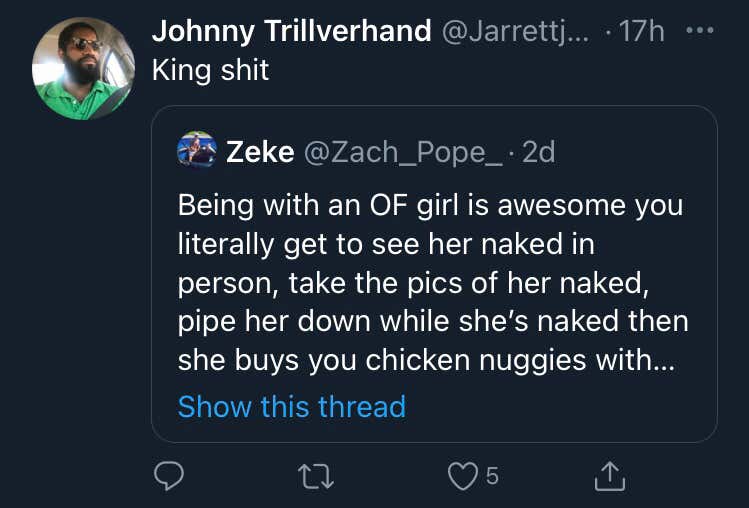 Speaking of King Shit, I did a little dive into Zachary’s timeline to try to get an even better feel for how to win women over with your words. 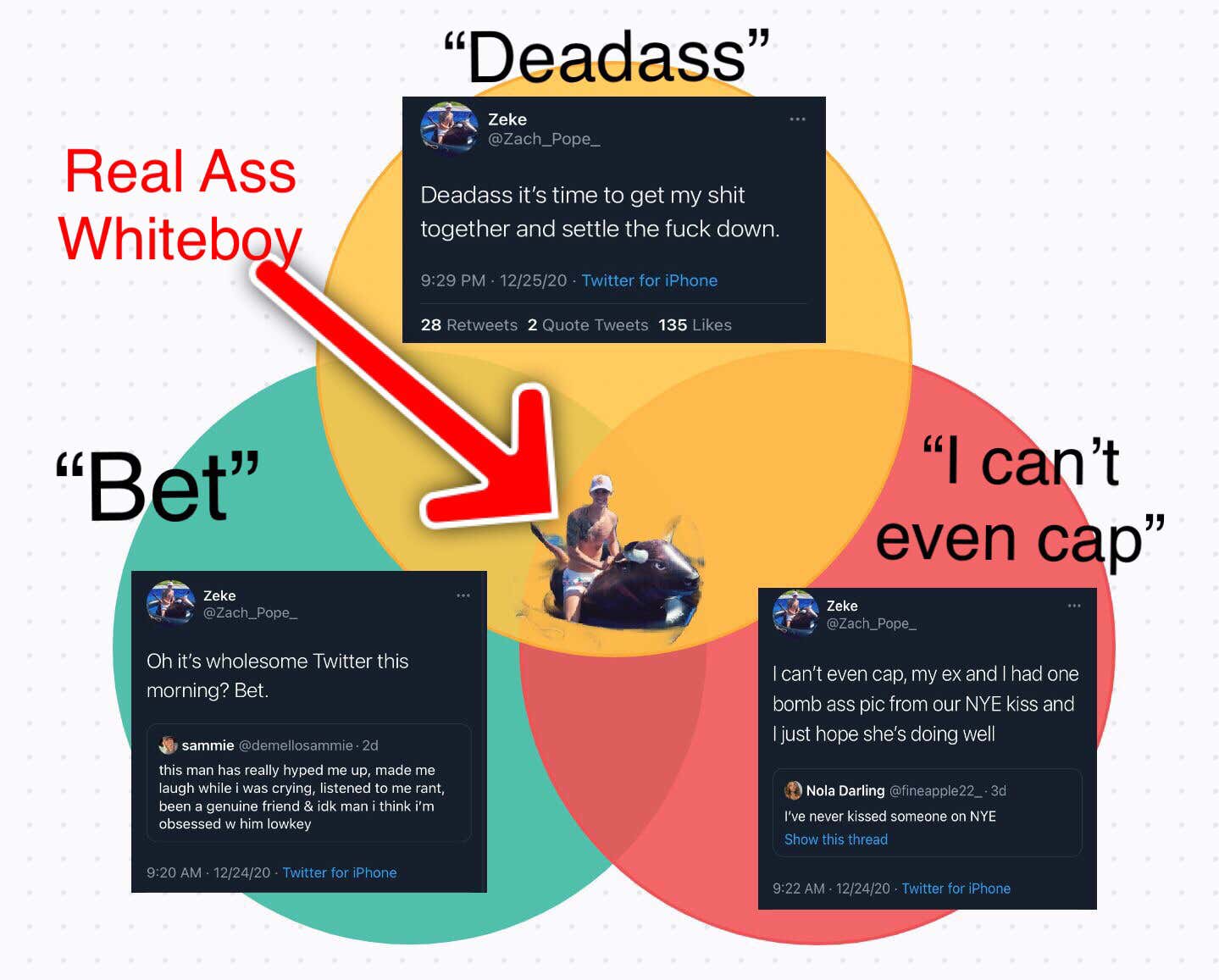