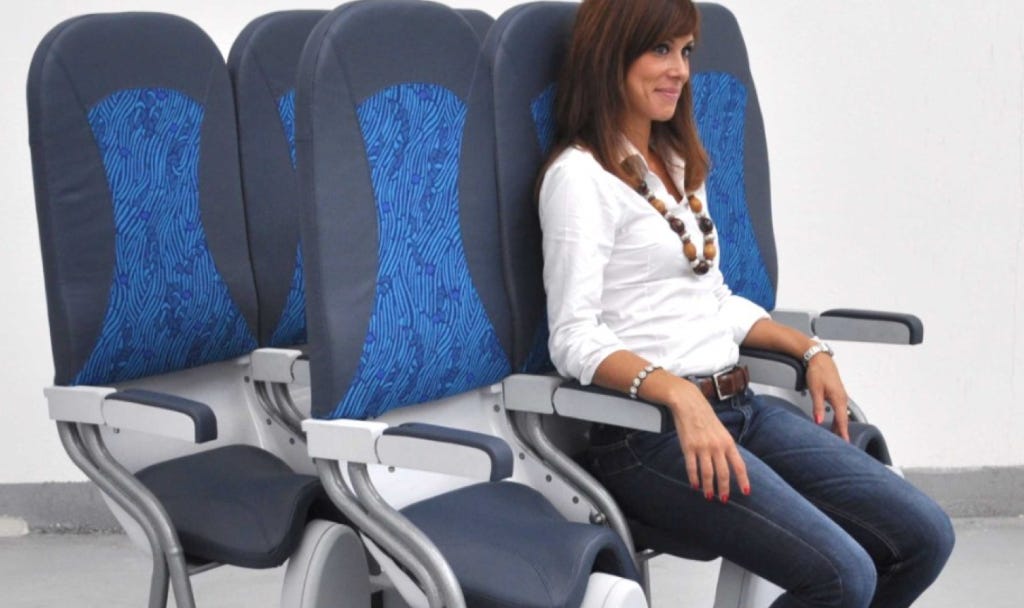 (Source) — It’s not some miserable dystopic movie scene about class polarization. The vertical passenger seat — or “standing cabin” — may be the next big cost-cutting move in aviation, according to a new report whose author says the concept could be here within five years. “I stumbled across the idea when I was looking (into) ways to reduce the flight ticket price,” Fairuz Romli, who authored the report published in the IACSIT International Journal of Engineering and Technology, tells CNN by email. Romli, an aerospace engineering professor at the Universiti Putra Malaysia, says his motivation is to lower the cost of air travel to a level competitive with buses and trains. Using the popular Boeing 737-300 as an example, his study calculates that a standing cabin would lead to a 21% increase in passenger capacity while dropping ticket prices by as much as 44%.

Boom! There we go, aerospace engineers! Flying has sucked for way too long. The terminal wait is miserable, TSA sucks, the boarding process is always out of control, seats are too cramped. There were a million problems. Well not anymore, time to finally give the people what they want: the ability to sit in a wall squat position for the duration of the flight. Don’t bring the drink cart around more often, don’t give us more leg room, just make sure that we have the ability to sit in an upright position against a flat back from gate to gate. Honestly shocking we haven’t thought of this before. The only problems I can think they might run into are old people, babies, fatties, and the fact that no one with a brain flies sober. I’ll admit that when I’m riding the T I never look for a place to sit but when I ride the T I’m also rarely 4 beers and a Xanax in with the intention of drinking a couple Bloody Marys. Oh well, at least there’s no turbulence to make sure I fall over easily.