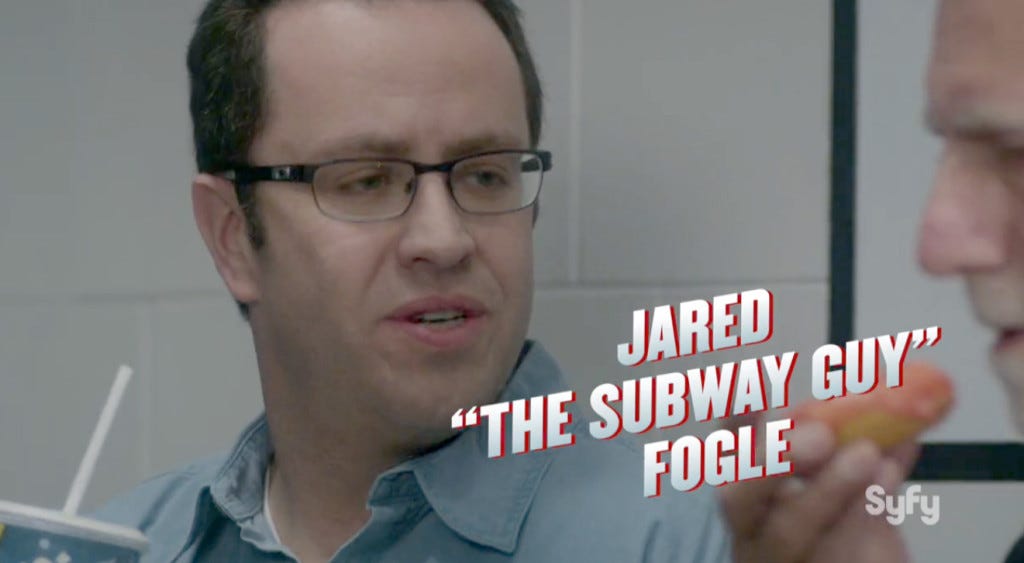 TIME – From cutting calories to getting cut.

Well there you have it. The final deafening blow to Subway Jared’s career. Out of everything that has occurred over the past 72 hours for Jared Fogle, this may be the toughest for him to swallow. Anyone who knows anything know that if you make a cameo appearance in a Sharknado movie, it means that at least your career is not 100% dead yet. Sugar Ray, Tara Reid, Andy Dick, Biz Markie, Billy Ray Cyrus, Kurt Angle, Subway Jared himself, the list goes on and on. All “celebrities” that if they weren’t featured in a Sharknado movie, you’d be looking them up on Wikipedia to see the date that they died only to realize that somehow they’re still alive. But now Subway Jared doesn’t even have Sharknado: Oh Hell No to hold on to anymore. He lost his job as a spokesman, he lost his freedom if he ends up going to jail for this gross shit, and now he lost Sharknado. Draw a line of chalk around Subway Jared because the man is dead. And rightfully so.

Now if the producers of Sharknado 3 had even half a brain in their skulls, they would quickly replace Subway Jared’s cameo with DeAndre Jordan since Mark Cuban is playing the role of POTUS. Boom. Now it’s raining ratings.

P.S. – How hard to you think the writer for TIME cummed himself when he wrote that line “From cutting calories to getting cut”. Probably filled up a 2 liter.