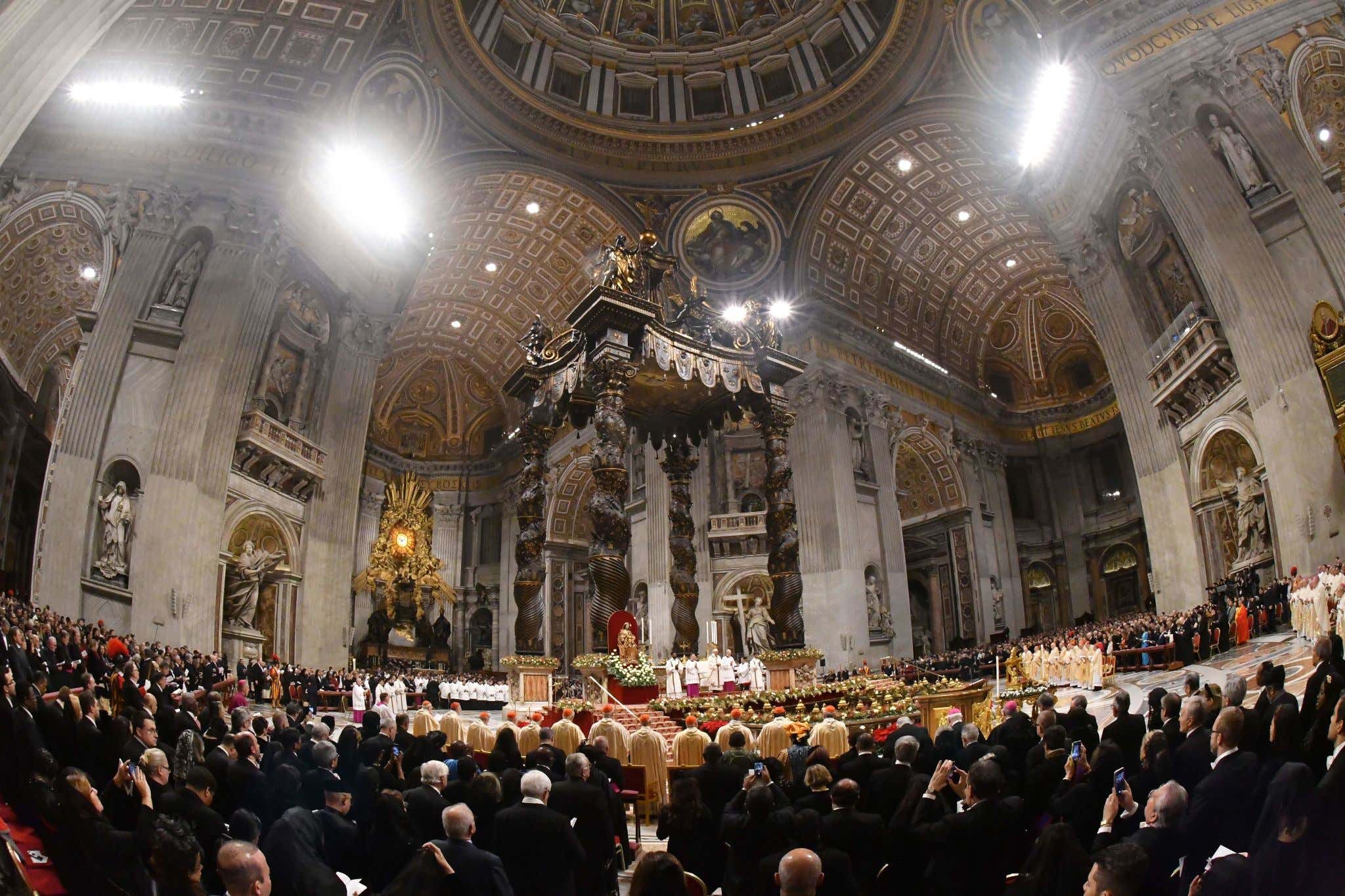 Note: If you’re an asshole who’s actually attending mass tonight, good luck. I guess. Actually you’re an idiot and I don’t care about you or any loony tunes religious people getting together indoors. But I dunno I bet there’s some poor bastards doing Zoom church or some sort of virtual shit with nana and pop pop giving out communion in the living room. And to THOSE people…I wish best of luck…

Easily the worst hour of my entire year is Christmas Eve Mass. Brutal. I love Jesus and I love Christmas but goodness gracious the Catholic Church really dropped the ball on Christmas Mass. Such a freakin production. You got the kids dressed up as Mary and Joseph and Wise Men and shit. Doing the whole pageant which adds another 45 minutes. The choir sings the extended versions of every hymn. 4 or 5 verses per song. The place is packed to the fucking brim. Got bodies hanging from the rafters at Christmas Mass. And then to top it off, they straight up poison gas the whole room with incense. I'm just inhaling stinky smoke with 500 other people who haven't been to Church since Easter. Disaster. As a young man growing up I could have used a quick guide to help me through this ordeal, so every Christmas I post this top 5 to help you through it all. Christmas never changes and its the same boring shit so this list is timeless as well..

0. Pre-Mass Problem - Your family has asked you to save seats. Sure, no problem Ma, I’ll save the family seats at Christmas. How about you also send me over to Afghanistan to solve the war in the Middle East as well? Maybe I can go steal food out of the mouth of a starving rabid dog too? I mean, Christ on the Cross, can you pick a more dangerous fate for someone than a one man seat saving operation on the most crowded Church night of the year? We got hundreds, literally hundreds, of disgruntled, agitated one-year-away-from-turning-atheist Catholics crammed into a tin can church for the next 75 minutes. They don’t want to be there, they’re wearing their itchy sweaters, they’re hot as fuck and trying to understand why they still participate in this tradition with an institution as crooked and corrupt as they come, and now I, by myself, am gonna tell them they have to stand up the whole time all because my jacket from J. Crew you got me last Christmas is laying on the pew? I have to look them dead in the face and say “hey I know this is miserable and you did the right thing to get here early to get a seat but now your L4 and L5 vertebrae are gonna be BARKING by the time we get to the second reading because my family sent me here with a scarf to hold seats. I’d rather be John MacLean in the heart of Harlem wearing the sandwich board from Die Hard With A Vengeance than save seats on Christmas. I’d rather be John Snow in the Battle of the Bastards GIF pulling his sword out with a hundred horses stampeding his way. Fuck you for making me save seats. The congregation is ready to tear you to shreds like Scar's hyenas on Mufasa's dead body after the stampede. Solution: bring as MANY garments of clothes as possible. Multiple jackets if you can swing it, because that makes people think there’s another person also saving seats, and not just you trying to hold down like 8 for yourself. Lay as many items down on the pew and then sit there, in silence, staring down at the back of the pew in front of you. Keep your head down. I mean KEEP YOUR HEAD DOWN. Don’t break your stare for ANYONE or ANYTHING. Fall into a trance. Like you’re in Guantanamo Bay and they are about to torture you for info but you’re hellbent on remaining stoic and staying silent. They will whisper. They will “psssst!” And you will ignore. Like it’s not even happening. 2 things that people hate that confuse them and make them uncomfortable and confuse them: silence and not acknowledging them. It’s so against social norms they won’t know what to do. They’ll wave. They’ll do all sorts of gestures to get your attention. You ignore and stare straight ahead like you’re on the subway and a bum is begging for money. They’ll move along. If they don’t and somehow you must make eye contact, you turn your head to the side, make an “oh this is so unfortunate!” frowny face, point up and down the row at your seats and whisper “yea, taken, sorry” while looking over your shoulders to signal that your family is actually here or just arriving right now. Don’t be afraid to actually wave at nobody in the back of the church and make a “come hither” motion as if they are walking up imminently. Then resume your stare. If you're desperate…like TRULY desperate…its 4:55 for 5 o'clock mass and your family is nowhere in sight and you need a..ahem…Hail Mary…pray. Just fucking pray. Kneel down on the kneely thing and start praying like you're the bad guy in the Da Vinci Code. Mumble in fake Latin. Look up to the Heavens. Arms extended like you're receiving the Holy Spirit. Nobody will fuck with you. And nobody will want to sit next to that weirdo. They'll be afraid you'll try to hold hands during the Our Father.

1. Not Knowing When To Sit, Stand Or Kneel- This is the most basic problem for anybody who only goes twice a year. Its like a goddam dance routine for an hour straight. Up down, up down, kneel, up, down. Disaster. Especially at Christmas because the majority of the whole congregation doesn't know, so they are looking around to follow everyone elses lead. Its like the Blind leading the Blind and everyone ends up bent over, half sitting, half standing, in some sort of limbo. Much like the afterlife that awaits us all. Solution: Find the oldest old lady in the joint, and follow her lead. The older the better. Old people go to church like 10 times a week and when they were kids it was still in Latin and shit. They know the whole process better than the priest himself. Sit, Stand, and Kneel with her and you're good to go.

2. Not Knowing Any Of The Prayers- Problem 1.A. for bad parishioners. Most of us know our Our Father and our Hail Marys. But like, the Nicine Creed and shit? That one where they say "Just say the word and I shall be healed?" Those are like full blown speeches. Who the fuck can remember those when the last time you were at church was 6 months ago. Especially now that there's "New Mass." They made those changes to the whole script like 10 years ago and I still haven't caught on. Songs became prayers, prayers became songs. A couple years ago I finally knew when the "Praise to you Lord Jesus Christ's" were and the "Thanks be to God's." Not theres all sorts of shit like "And forever and always with the congregation as well." Priest is like "The Word of The Lord" and everyone else is like "These are the days of our lives." Completely absurd. Solution: Mumble your way through the whole thing, just make sure you hit the essentials. You know, like "humina humina humina, TRESSPASSES." "Yada, yada, yada HALLALEUJAH." As long as you're with the rest of the church for the keywords, you're good.

3. Shaking Hands during Peace- Easily the most awkward part of Mass. I gotta shake hands with some rando? Touch the old lady with wrinkly hands? No thanks. And you do the awkward thing where you turn and see someone and you're like do I shake, do I not shake? You stick your hand out and pull it back and its like you're doing the fuckin hokey pokey. Solution - No eye contact. I have a steadfast rule: I do Peace Handshakes and Peace Kisses with my family members, I fill my quota with one stranger and one stranger only. After that, I look directly at the ground. If you don't look at anyone, they won't expect a handshake. I'm debating just turning around and giving the whole church the two-fingered peace sign. Just peace the whole crowd and call it a day.

4. Always Have An Exit Strategy - Nothing worse than when you're in the home stretch and it feels like you're all done after Communion but you realize there's like 10 more minutes after of no value. You gotta go back and kneel for a while as everyone else finishes getting theirs, and then there's another prayer and a song and you gotta wait for the priest to walk the whole way down the aisle. F That. Solution: Make sure you put your jacket on before you go up for Communion. Because you're gonna wanna get your Jesus Cracker, curl around the back of the church, and dip out to beat the traffic. Post-Communion church is like the last 2 minutes of a game when you're up by 50. Its best to just skip out early and get to your car.

5. The Most Important Rule - Don't Look At Any Girls- Without fail there's always a couple girls you went to high school with or a couple girls who were like freshman when you were a senior in high school and now their all grown up and lookin like a smoke. And of course they're dressed completely inappropriate and you take one look at them and your mind instantly wanders to some very un-Christian thoughts. I always see some girl who was probably like 16 years old, looked like she was 25, and as the priest is talking about mangers and frankincense and I'm thinking about stalking her Insta and asking her to be a smokeshow. Terrible. Solution: No fucking clue. Haven't figured out how to stop doing this. Any suggestions are welcome.