CNN- Instead of helming Santa's sleigh, a Santa Claus impersonator took to the skies in a hang glider-like aircraft to spread some early holiday cheer -- and wound up tangled in power lines. The would-be Kris Kringle was safely rescued on the Sunday before Christmas after spending an hour suspended above the ground in Rio Linda, a city in California's Sacramento County.

His mishap, however festive, shows why civilians should perhaps leave the more magical elements of Christmas to the real jolly old man in red. The Santa told officials he was in the area delivering candy canes to local children, said county Fire Capt. Christopher Vestal. Without Santa's reindeer, the man delivered his gifts in a recreational aircraft that the fire department described as a "hyper light." It uses a small motor and "blower" to propel it while a large parachute catches the wind and keeps it in flight, Vestal said.

You knew it was only a matter of time in this god forsaken year, but we can officially Cuncel da Chrismas! Saint Nick somehow avoided catching the coco in 2020 but he couldn't avoid catching some power lines while trying to spread some Christmas cheer. Good luck to the parents of Sacramento trying to explain how Santa is going to be able to get back to the North Pole, load up his sleight full of toys, and not fly Rudolph directly into a gruesome death by electrocution. Yet another example of why sticking with the classics always works during Christmas, whether its listening to the hits on the radio, watching the usual flicks on TV, or slapping a Santa suit on a fireman and giving him a flask of whiskey to ensure he is warm and merry for the entire duration of what sounds like the longest fire in your town's history.

I know this may move me squarely from the Nice list to the Naughty list, but this image is LOL funny. 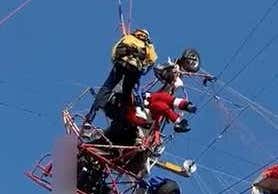 P.S. As a father that got to witness this annual tradition in his small suburban town again this weekend, I can proudly confirm that Santa giving out candy canes on a firetruck still hits today's kids as much as it did for us back in the day. The entire Clem family may have had frozen faces after standing outside for an hour because we ran outside the minute we heard sirens that were nowhere near your house. But seeing your kids freak the fuck out like Robbie Fox watching a Star Wars trailer because a firefighter in a Santa suit gave them a candy cane they immediately gave to me because they are uncultured mamalukes that don't like the taste of mint yet was beautiful to see. #Somethings