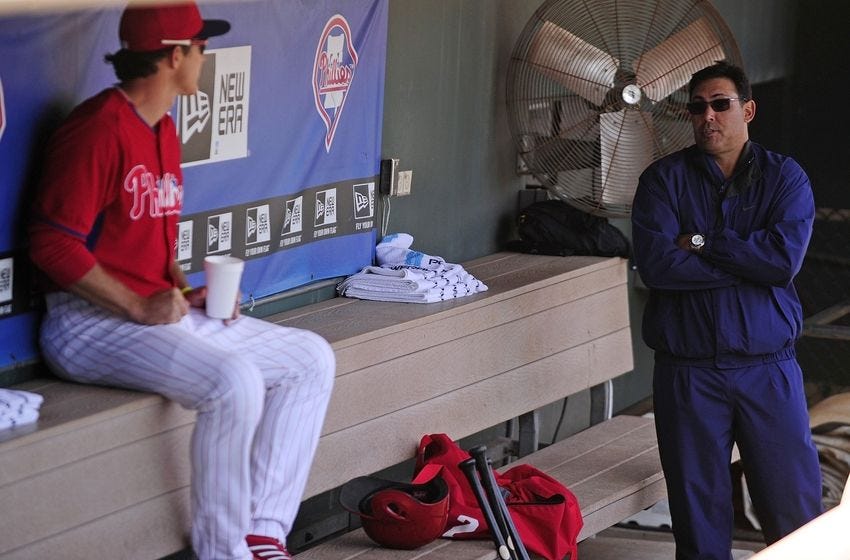 ESPN – When an iconic player’s status changes significantly, the moment usually involves a news conference, with the star player flanked by his manager, his general manager, a few teammates and maybe even family.

But with Chase Utley and the 2015 Philadelphia Phillies, this is not how the apparent end of his tenure as a regular player for the team played out, the latest sign that we probably haven’t seen rock-bottom in this ugly reconstruction.

When speaking with reporters — Todd Zolecki among them — general manager Ruben Amaro Jr. was asked whether Utley will continue to be the team’s primary second baseman when he’s activated from the disabled list. From Todd’s story:

“Not for me he’s not,” Amaro Jr. said. “Cesar Hernandez is our best second baseman.”

So whenever Utley returns …

“I would assume that Cesar will be our second baseman,” Amaro said. “Chase’s situation will kind of dictate itself, how he feels. There’ll be time for him to play, I think. He could play some first base. He could play some second. But as far as I’m concerned, just like what our plan has been for a long, long time, that’s to give opportunities to young men who could be part of our future. Cesar Hernandez has been one of our best players on the field right now in a variety of ways.”

Not surprisingly, Utley had little reaction about Amaro’s comments.

“Well, I think Cesar has done a really good job,” Utley said. “There you go.”

Yes, there you go.

Hey Ruben, don’t you think one of the greatest Philadelphia Phillies deserves a tad more respect? Like, even if you think he’s through, maybe, just maybe, keep it to yourself or in house? And that’s not even going into the fact we’re talking about CESAR FUCKING HERNANDEZ. Yes, he’s been playing half decent. However, being “one of our best players on the field right now” literally equates to being the tallest midget in the circus. And I get these buffoons upstairs who have made this team into the worst organization in all of sports wants to see what kind of young talent the have, but come on. There are certain ways to go about things, and essentially saying you want to Old Yeller one of the most beloved figures in Philly sports history for a new pup is not cool, asshole.

Oh, and your “Wow, this team is THAT bad” stat of the day: The Phillies have a run differential of -131 this year. The next worst squad? The Chicago White Sox at -79. The Phillies have been outscored by a total of, carry the 2, 52 motherfucking runs by – no not the best team in baseball – the next shittiest. And we’re not even at the ASB.