As I've said countless times this week around Barstool Chicago HQ, we're balls deep in the Christmas season and never has it felt so good. Just this afternoon we drafted various Christmas categories with Nick on the Snake Draft. It’s a great draft with a passionate argument about whether or not this guy is a worthy Christmas Villain

I still have nightmares about Heat Miser but that's just me. A red blooded American that grew up terrified of claymation Christmas movies.

Point is the Christmas spirit is full and rich across Barstool Chicago and I want to keep the train moving with an in-depth look at The 12 Days.

Did someone say 12 days of homemade italian beef baptisms?

Or you may know it in the official religious capacity: a 12-day celebration running from 12/25 - 1/5 and loaded with both Eastern & Western liturgical feasts celebrating the Nativity of Jesus.

But the 12 Days most popular manifestation is the English Carol made famous in the early 20th century by English composer, Frederic Austin. He repurposed the original 18th century poem, which is said to be inspired from French folklore. It wasn't until they added music and made it a sing-along that it really blew up. Think of Elvis without the hip thrusting and more group engagement. That's what put 12-Days of Christmas on the map and 111 years later it's still going strong.

That said, what the fuck exactly is a partridge in a pear tree? Why do we put the brakes on the song every time we get to 5 golden rings? Are there such things as horse socks? These are the questions I set out to answer as I dive into the official power rankings of the 12 days.

Let's get into the song starting with the absolute WORST day of christmas:

Couldn't be any easier of a start to the list. A calling bird? 4 of them? No fucking thanks guys. Preliminary research pegs a Calling Bird on the same level as a canary minus the beautiful coat. It's more of a deep charcoal and there's nothing cute about the appearance. Making matters worse, it's highly communicative but not in the fun way that tricks you into owning a parrot for 55 years. More of a screech. More of a burden.

Surprisingly, the Calling Birds sneak into a song that's mostly about delicious birds you want to eat around the holidays. As we'll see later in the list there's some premium poultry in this song. But right now that's not a Calling Bird.

No offense to my diehard ornithologists.

I don't have a pool or an adjoining body of water to my property. So out of the gate this becomes a big challenge. I also don't like the idea of a wet bird - even if I had the infrastructure to support Seven Swans of Swimming, I certainly don't find the aftermath appealing. Who's cleaning up after all these birds? STOP LOOKING AT ME.

Here's another problem. Swans mate for life. They form a pair-bond which we'll see again here in a second. Issue I have is you're giving me an odd number of a species that's known for living in pairs? That's kind of fucked up if we're being honest. I don't need one swan all depressed because nobody wants to fuck him. That's bad energy around the holidays.

This is where things start to get tricky because I don't know what we're piping here. Are we gassing ACDC It's A Long Way To The Top? Then you go right to the front of my list, no questions asked. That's good piping.

But if we use our brains, we know this comes from a time long before you blasted the music with the windows down. When they say piping back then they mean some really lame shit, especially if we know it comes from France. I don't need eleven of these pussies mooching off the red wine, blaring their vaguely piped instruments in everybody's face.

That said I will make an exception in the same vein as ACDC - if these are Bagpipers then I made a mistake. You're #1. But I don't think you're a bagpiper because that's inconsistent with the history of the song. Even so I love bagpipes. Nothing sweeter than when the bagpipes lead a high school football team on to the field. Arguably better than an F-16 flyover.

I've been pretty negative thus far so let me give some credit. We're talking Two Turtle Doves, we're talking low maintenance. And that will always be high priority for a guy like me. With Turtle Doves we're back to a pair-bond animal which means you find a partner for life. There's something pleasant about knowing those birds love each other.

Personally idk what the fuck you do with Turtle Doves but I do know they are pretty and they represent love and happiness. So if you think I'm throwing them at the bottom of the list you're out of your mind.

And similar to Calling Birds, these are not the kind of birds for feeding the family. More decorative. Less functional. That's going to cost you around here.

Finally some good food production. This time we're here with a massive bird that is significantly less aggressive than it's cousin Swan (#11). Instead you have the notoriously docile, peaceful, domesticated animals with Six Geese-a-laying. They're a harmonious bird by nature, and this time they come bearing gifts: delicious eggs for breakfast the next day.

Still, a lot of geese shit to account for but I'd be a sucker to pass on this bird at #8. I'm not saying you could build a dynasty around Six Geese-a-laying but it's definitely a pro bowler.

7. A Partridge In A Pear Tree:

This is a swing ranking for the list. From here we really get into some good shit but first I need to tackle the Partridge In A Pear Tree. This one's tough.

If we take it at face value, we have another small bird in a tree that produces sweet fruit. Hard to turn down that combo around Christmas time. I happen to find pears enjoyable but more importantly I like a tree that can give me a lot of them. Is it better to have some fish or know how to fish? Exactly.

But if you dig deeper, this line was created to put some flow into the song. The real intent wasn't to have a pear tree at all. In fact the original line included a more sophisticated name of a French pheasant-type bird that was phonetically similar to "partridge in a pear tree." So back in the 18th century when its publishing became mainstream, they needed a phrase that had more punch than the formal title for some fancy asshole French bird. So they went with "Partridge In A Pear Tree." You had to get that right because it's the bedrock to the song. And let's be honest, they nailed it.

On a practical level, it works for me because you harvest pears in the fall, preferably before the end of October. Then you let them sit around for a couple weeks so they soften up. Get those juices flowing long enough and you can make perry, a natural alcohol similar to hard cider. Sounds like a delicious festive beverage, especially back then when it was probably really hard to get a good buzz.

This is a judgement call but as a Chicago guy I'm a sucker for good tumblers.

So work with me while I assume our Lords-a-leaping are putting on a halftime show for the ages. I'm thinking between dinner and opening presents we go outside and watch the lords put on a goddamn show. Tell me that wouldn't be an awesome addition to the family party this year.

There's just something about a French Hen that I love. Think of the year-round quality eggs. No disrespect to the Geese but sometimes you just want two sunnyside up to start the day. When you think purely from a functional standpoint, it becomes almost impossible to beat a French Hen much less 3 of these things.

Maybe that doesn't win you any awards around Christmas time but I like a diversified portfolio with my 12-day ranking. You may not love the pick now but when it's February and miserable you will be so happy I went 3 French Hens as you bite into a delicious ham and cheese omelette.

Three French Hens are off the board.

Everybody knows the kid in the neighborhood with the drum set and obviously that can be annoying when the whole block hears him practicing.

But when you say 12 drummers drumming, I'm forced to think Drumline.

Drumline is a severely underrated movie. I legitimately almost bought a snare drum when I saw this movie for the first time. Almost. It wasn't that inspirational but I still enjoyed it.

That's why I'm going 12 drummers drumming here at #4 overall. Seems more organized than the pipers. I have more certainty than the lords of leaping. Probably a tighter and shorter production too so that's a bonus. But end of the day I really just want that entertainment value and to me that's a good old fashioned drumline.

Idk what we're milking but I could use the help around the house and I'm compelled to assume they have a good firm touch I've come to enjoy. Also bonus points for the maid outfit. Underrated role play all things considered but that too is a different blog.

For now let's just say nobody here is turning down 8 milking maids for the holidays. I don't need to belabor the point and end up on some kind of watch list so let's just agree it's top-3 and move on.

That said 9 dancers is a lot of dancers. You like your chances when you're working with a group that big. You're gonna make eye contact with one of them. The next question is what do you do with that momentum? Ball's in your court when you have nine ladies dancing. Just saying.

You're delusional if you have anything other than Five Gold Rings #1. Sticking straight to the song, it's the best part, no questions asked. Everyone gets jacked up for Five Gold Rings. It's a chance to catch your breath and level up. Everyone gets on the same page. It's a break in the monotony of 6-12, which can be an absolute GRIND depending on your pace and tempo. It really is the mid-verse crescendo and I love it. Personally I love it.

But going just a little further, I want the gold. I want the hardware. Just look at the price of gold over the last 30 years 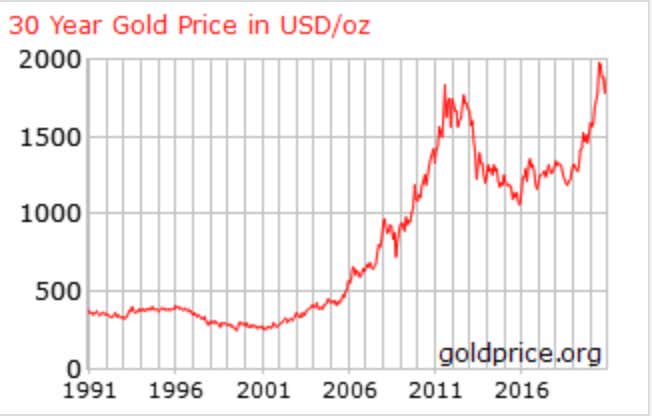 There's no amount of Milkers or Strippers on the planet with this kind of ROI so of course I'm taking the gold. Such an easy pick that I'm compelled to do a sub-power ranking of the top 5 rings I'd want, all things equal:

When you think of it like that: the importance in the song, the historical price of gold and just how cool it would be to have 5 championship rings of your choosing, it's basically impossible to think anyone else could be #1. So that's where I'm going to close this down. Five Golden Rings.

Thank you for your time. I know I fucked something up so please use the comment section for the usual friendly discourse.