This is a little hard to see but it’s like one of those Magic Eye things if you look closely. If you’re not seeing the shot to the face, keep your eyes trained here, the kid in the blue shirt at the point of contact: 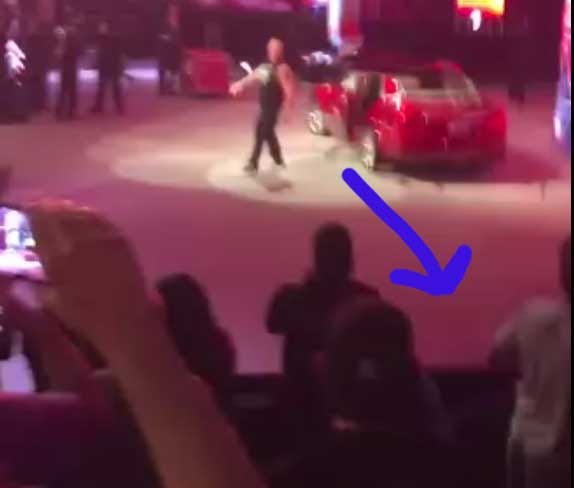 So for some reason, on last night’s episode of WWE’s Raw, Brock Lesnar destroyed a pimped out Cadillac with an axe (additional context won’t help this situation make any more sense, trust me) and it was a legit scene of a 6’5 300 pound man destroying a car like the Street Fighter bonus round. But even though it’s wrestling, they generally don’t make fake Cadillacs designed just to get destroyed so this bit of play acting featured Brock Lesnar ripping a car door of and then winging it approximately 30 yards directly into some kid’s head. You can watch the whole scene in the YouTube above, though WWE did savvily edit out the part where Brock chucks the door into the crowd for obvious liability reasons. Where are the parents and why didn’t they maybe think “Hmm, might want to pull my kid back here”? Great question. Why are these guys celebrating and lifting their new commemorative car door up right next to the site of a severely injured child? Greater question. But that’s wrestling for you. It’s not real unless you’ve got Brock Lesnar throwing a Cadillac door directly into your child’s face. Everything else is just showmanship. Now we know that and it only took one teeny tiny Pokemon cast for a fractured skull to teach us that. Thanks, Brock.

PS How much distance do you think you could get throwing a car door? I’ve got a decent football and frisbee arm, at least like two and a half Weird Haircut Seths, but was pretty awful at throwing the discus in high school track so I don’t want to oversell my theoretical skills here. If you made me bet my life, I’m thinking 15 yards max and a whole lot of Icy Hot would be in store for any normal human’s attempts.