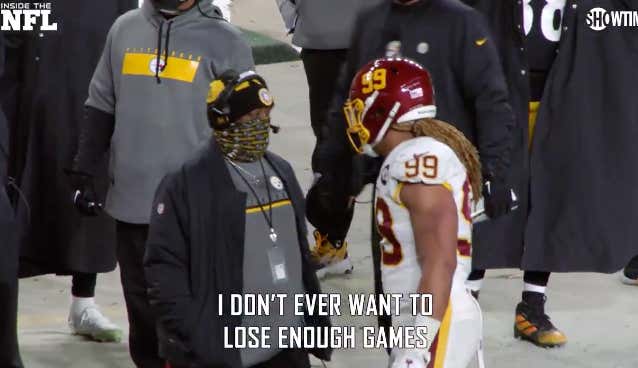 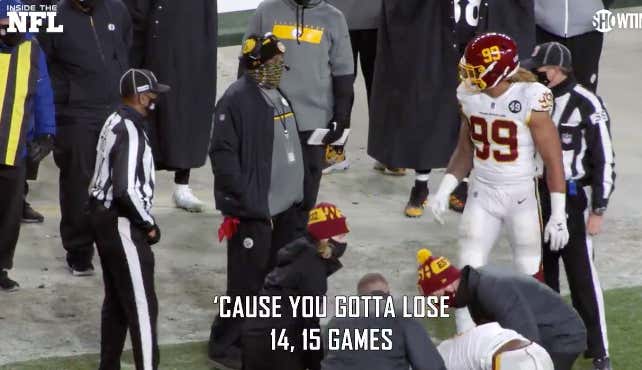 What the fuck, man? I have never seen a bigger boom roast while simultaneously complimenting a guy before ever in my life. First of all we went 3-13 to get Chase Young, so suck on that Mike Tomlin. But second of all, what is Chase supposed to say to that? "Yeah, this organization is dog shit, sure wish I went somewhere else Mike". And saying it once wasn't enough, he had to say it again, just for good measure. Meanwhile, Cam Kurl is dying on the field 3 inches away from them. For shame, Mike Tomlin, for shame!

Obviously he ain't wrong though. Obviously ya gotta suck real bad to get the number 2 pick to be able to get a Chase Young. However right now Chase Young is the 2nd best edge rusher on this team. Because Montez Sweat is a fucking BEAST. He's not getting any national love, but one day he will because he is a monster of an athlete and football player. He's 6'6, 260 pounds, runs a 4.4 40 and had 7 sacks last year as a rookie, despite playing some weird hybrid EDGE/LB position where Manusky had him dropping in coverage for god knows what reason. This year he is disrupting the QB on nearly every play, has 6 sacks so far, bats down every ball thrown his direction, and if just an absolute force.

Wait back to Chase Young real quick- he is not getting the love he deserves for what he's doing in the running game. His reads on the running game are so ridiculous. The number of things he does at an elite level this early into his career is astonishing. This was a game-saving tackle he made yesterday:

Chase Young and Montez Sweat, good lord we are lucky to have them. And look at him, nobody loves it more.

It's remarkable what happens when you draft well, develop players, and have a head coach that the players buy into.