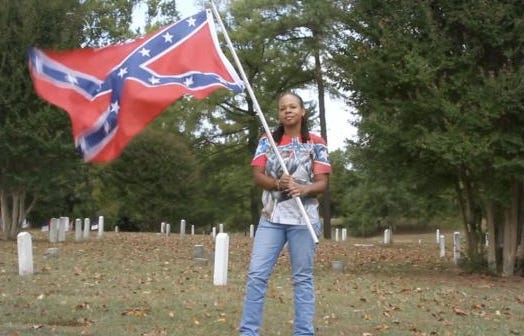 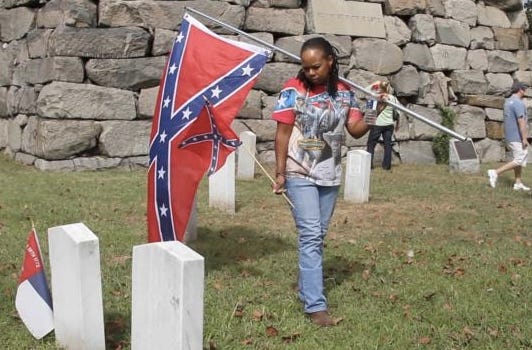 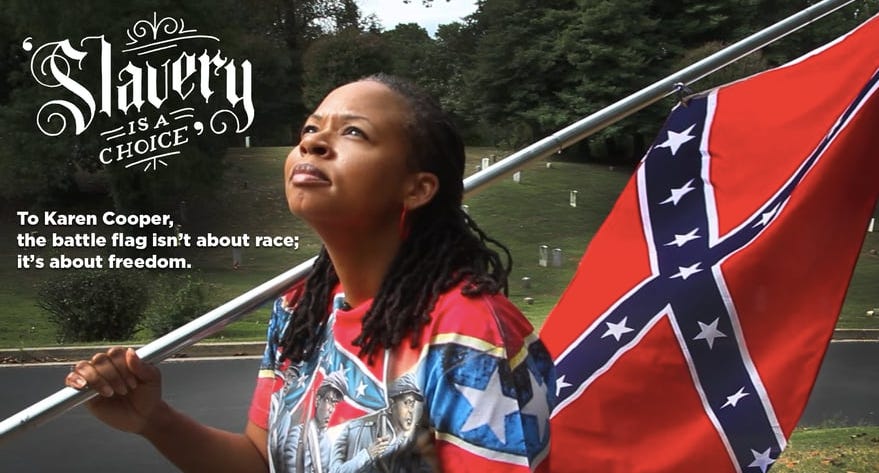 (Source) A black woman who proudly waves the Confederate battle flag because it “represents freedom” also believes that “slavery was a choice” — because slaves had the choice to die. In a new interview, Virginia resident Karen Cooper explained why she joined the Virginia Flaggers, a group that defends the rebel flag against those who “worship ignorance, historical revisionism and political correctness.”

Cooper — who found the flagging group through her activism in the Tea Party — explained the Confederate flag symbolizes a movement away from big government. “I actually think that it represents freedom,” she said in an interview for “Battle Flag,” a documentary project about the flag. “It represents a people who stood up to tyranny.”

The interview comes amid a national discussion about the flag’s meaning — and vocal calls to remove it from government buildings after a rebel flag-supporter shot and killed nine people in a historical black church. Cooper, a New York native who later settled in Virginia, brushed off the flag’s history in slavery, explaining that oppression is not exclusive to the Confederate. “I’m not advocating slavery or think that it was right. It wasn’t and none of my friends think it was. It was just something that happened. It didn’t just happen in the South — it happened worldwide.” Besides, “slavery was a choice,” she added, because slaves had a choice to die.

You think you’ve seen it all, you think the Internet has uncovered all the crazies in this world and then you realize how wrong you were because there’s a black Muslim woman from New York living in the South defending the Confederate flag. Just that alone was enough to make this a hell of a story but then she submitted one of the hottest takes of all time when she said Slavery was a choice because slaves could have just died and yup, I think I’m officially in love. Karen Cooper you wily bastard you. You’re basically Clayton Bigsby but not blind. Absolutely incredible. Next time you think someone doesn’t give you a choice, next time your girlfriend or wife tells you that you have to go to a dinner with her friends, or your boss says you have to work on Saturday without overtime, or you get summoned for jury duty, just remember this, you ALWAYS have a choice, you can just straight up die, dying is always an option.

This last line was so awesome and I honestly don’t know if I have a response.

“I know what people think about when they see the battle flag: the KKK, racism, bringing slavery back. So I knew it would be something for people to see a black woman with the battle flag,” she said.

“How can it be racist if I’m out there with them?” she added.

I think we now have to keep the flag?