Blogger’s Note: I had this Afflalo blog written up but then the Greg Monroe news dropped. So I added the Monroe story to the bottom 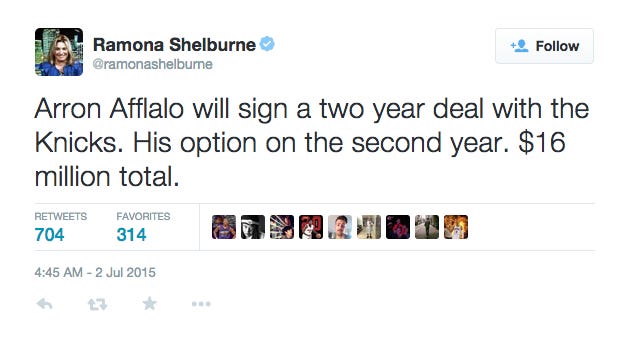 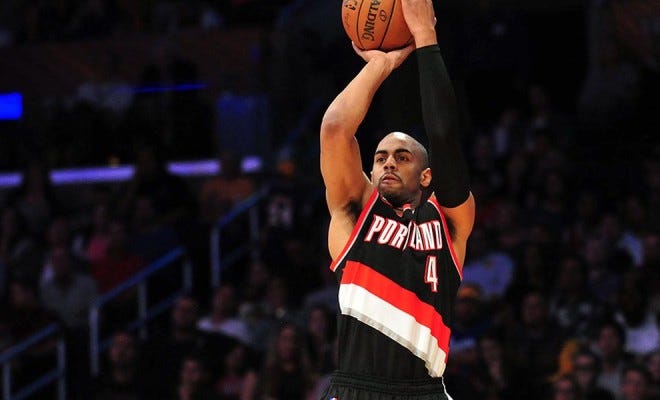 Do my eyes deceive me or did the Knicks make a rational signing that filled a need while not clogging the cap?  Sure Afflalo has bounced around the league a little, but he is a legitimate NBA shooting guard that can play defense and shoot the 3.  For reference, these were the “rumors” yesterday of the Knicks being interested in Landry Fields as he learns to shoot lefty.  So this news is somewhere in the 1,000,000% better range.

I am sure this contract is more of a move by Afflalo’s camp to avoid getting locked up long term so teams can overpay him once the NBA cap skyrockets in the coming years.  But I am more than fine with that.  In fact, I’d be thrilled to fill out the rest of the Knicks’ needs with a team of mercenaries that just want to to keep their options open until the cap explodes.  Because at this point, we are just biding time until Porzingis blossoms into Dirk 2.0.

Now does the fact that Afflalo spells his name “Arron” instead of “Aaron” scare me a little?  Sure.  But at this state of the Knicks franchise, beggars can’t be choosers.  And in the NBA, you just get used to names like Anfernee and Dwyane.  Plus, if the rumors are true that he hooked up with Hurricane Nia during her season of Real World Portland, Afflalo has proven that he is a survivor, if nothing else.  Hurricane Nia is the flat-out the scariest person on TV.  So the thought of her potentially showing up at Knicks games like a psycho ex-girlfriend does frighten me a little bit for Afflalo and the rest of the team.  But the Afflalo signing is a good start to the free agency season.

And then this happened:

I have to admit, I did not see this coming at all.  I thought Monroe would take the New York money and be a decent offensive player in the triangle while making us all pull our hair out on the defensive end.  But obviously that didn’t happen.  And you know what?  I am happy.  Because I have already seen the Knicks offer the Greg Monroes of this world huge contracts and those seasons have ended somewhere between agony and pure misery.  So let Milwaukee give Monroe a MAX FUCKING CONTRACT.  A max contract for Greg Monroe was probably a bridge too far (I think that saying makes sense here).  Monroe has to go to sleep at night knowing he chose Milwaukee over New York, further proof that lefties are quirky SOBs that can never be trusted.  #TeamRighty for life.

And how about the carcass of the “Monroe to Knicks” rumors not even being cold before Schefty starts piling on?  I guess Phil has to pay the troll toll if he doesn’t want NFL Insider Adam Schefter dropping #His2Cents after every swing and a miss by the Knicks. 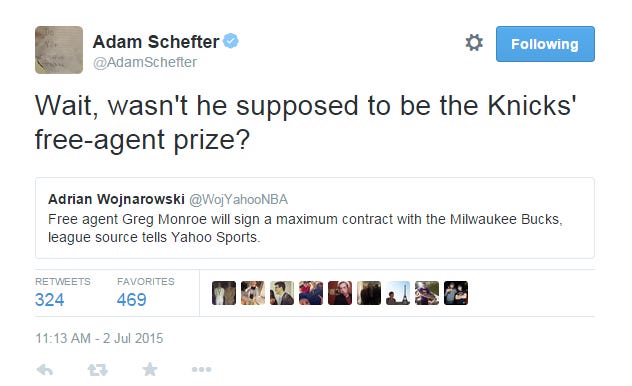 Anyway, here’s to hoping the Zen Master and Steve Mills have a couple more Afflalo-level smart signings up their sleeve.  Of course I would love LaMarcus Aldridge to shock the world and sign with the Knicks.  But I don’t think the strategy of “The Eastern Conference stinks and New York is the capital of the free world” will be enough to entice him.  Rumors say the Knicks may be going after Enes Kanter, who does intrigue me (even if he’s a restricted free agent).  Or does it mean the Knicks end up with the other Trail Blazers big man free agent (Robin Lopez) instead?  If it’s for a reasonable price, I can live with it.  And as a Knicks blogger, I would love to have this quirky, comic book loving, Sideshow Bob looking bastard manning the pivot. 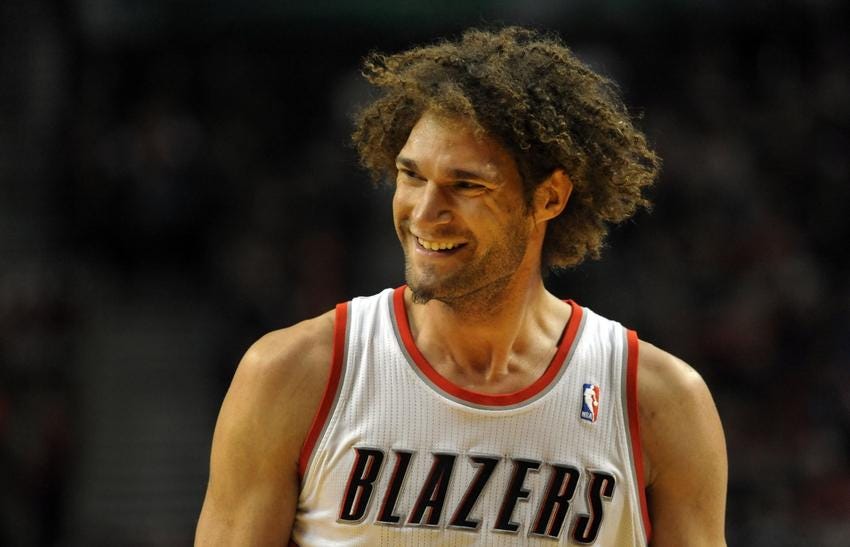