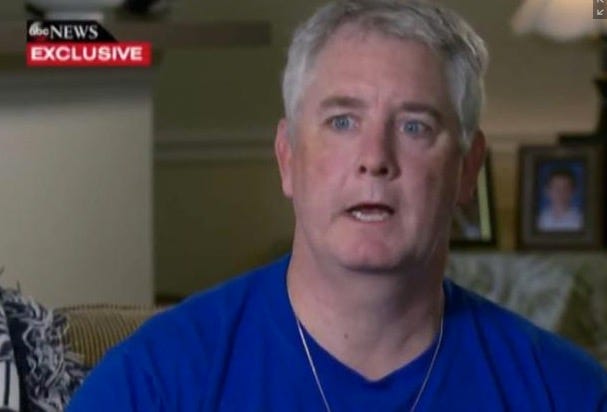 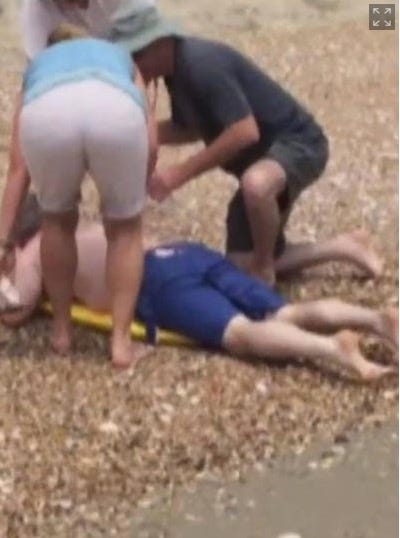 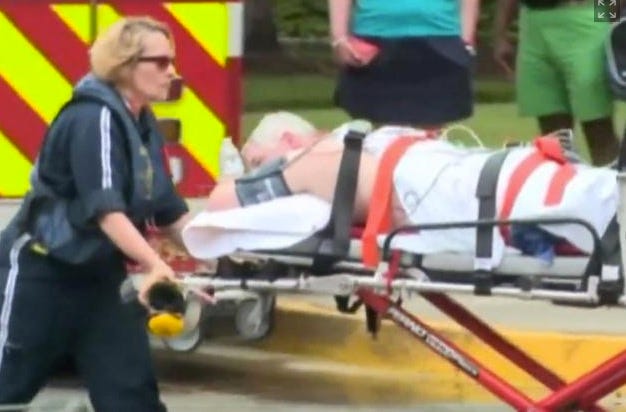 NYDN – A heroic father punched a shark to save his young son as they came under attack in North Carolina waters — and then used his body to shield the boy from a monstrous bite.

Patrick Thornton, 47, single-handedly fended off sharks as he and his 8-year-old son Jack suddenly came face-to-face with a swarm of four while swimming in the surf last Friday.

“I felt a tug at my foot,” the protective dad told ABC 7. “It took a pretty big chunk out of my right leg, so I started punching the shark.”

It was enough to make the animal swim away, but then Thornton saw his son was frozen in fear and still in the shark-infested North Carolina’s Outer Banks.

He waded even deeper into the blue to rescue him.

“I ran over and grabbed Jack, and as I was bringing him to shore the shark came over again and bit me in the back,” he recalled. “And this time, he bit me really, really hard.”

“I kind of punched down, and then I think I had two hands where I hit off of it,” he told ABC.

The quick-thinking Thornton was rushed to the emergency room for puncture wounds on his back and leg.

He’s recovering from the selfless act that saved himself, his son and another family from Tennessee who had enough time to scramble out of the ocean.

“If he had not been there and warned us, I don’t know what would have happened,” beachgoer Jamie Monroe told The Virginian-Pilot. “He is our hero.”

Dad mode – activated. Seriously I don’t know what it is, I obviously can’t relate yet, but something happens to a man when he has a kid and sees that kid in danger. 20 year old you sees a group of sharks swimming at you, you turn around and swim/run as fast as you possibly can to the shore. Dad You sees a group of sharks swimming at you, you punch a motherfucker in the face. 20 year old you gets a little bite taken out of your leg, you hustle to the beach and curl up in a ball and cry waiting for them to amputate. Dad You shakes it off and starts throwing more haymakers knocking sharks unconscious like a young Tyson not even caring you just took a monster bite to the back. It’s crazy.

Then again if you are swimming in the waters of North Carolina right now you are a certified psychopathic lunatic so I guess it all kind of makes sense.

(This clip has nothing to do with the story, it’s just when I think about sharks, I think about Samuel L Jackson getting surprise eaten in Deep Blue Sea)