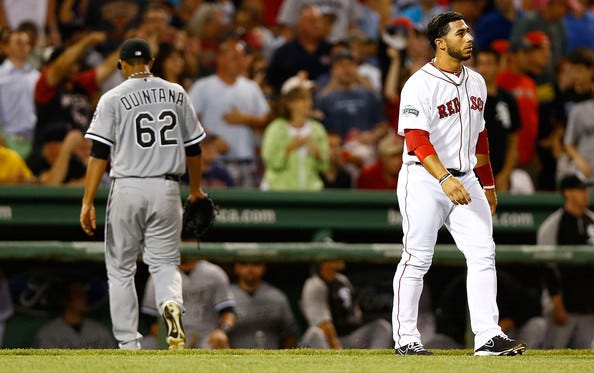 Call this a Renaissance of sorts; I haven’t covered the Sox for dick in the last month, for a few reasons.

1. They suck
2. I didn’t wanna kill Chicago’s Hawks vibe with depressing articles detailing why they suck
3. My computer is fried

Well you take a month off , wake up, and your team is so far out of the race that you have no other choice but to look at 2016, even after a mini-sweep of the best team in baseball.  For the next month I’ll be trying to rebuild the Sox by selecting their best assets in this steaming pile of shit and sending them to teams who have something to play for in 2015, and want to build for contention in the future.

If you’ve been following Carrabis on twitter/Barstool/Sec10 he’s delusional enough to think that the Red Sox are actually still in contention. That team stinks, but luckily for them, the rest of the division is only slightly above average and the playoffs are still in striking distance.  I laughed at Red Sox fans who thought their off season offensive acquisitions would be enough to ride into the post-season.     The Red Sox’s strategy of trotting out a 4th or 5th starter every day was bold, and surprise surprise, it hasn’t worked out. Boston NEEDS pitching.
Enter: Jose Quintana

My trade proposal is simple; I am offering Jose Quintana to the Red Sox for Blake Swihart and Devin Marrero.

Now, at first glance this trade may seem completely far-fetched. I’m here to tell you it isn’t, so let’s take a look at why.

Jose Quintana to the Red Sox

Jose Quintana is far from flashy.  In the last three seasons, he’s by far and away the league leader in no decisions. At a glance, he’s a solid 3rd starter in a good rotation.  With that said, he guarantees his team 200+ innings, a 3.5ish ERA, and 6-7 innings of 2-3 run ball just about every start.  He’s a quality start machine.  To the naked eye, he’s just kind of “there”, but to an MLB GM who is required to take a much more analytic approach in assessing any given player’s talent or performance, his true value becomes much more apparent.

Digging a little deeper into his advanced metrics, one will notice that Quintana has a WAR of 9.9 in the last 2 and a half seasons.  That would qualify him as a top 20ish starting pitcher in baseball.  Last year alone, per Fangraphs, he had the 10th best WAR in baseball for a starting pitcher.  Better than Madison Bumgarner, Adam Wainwright, Dallas Keuchel, Zach Grienke, and so on and so forth. Don’t believe me? Click here.  That kind of productivity nets a blue chip prospect in return if traded.

Since your boy Carrabis swears the Red Sox are still in contention in the AL East, if the Red Sox acquired Quintana’s services from the White Sox and he pitches as steadily as he has for the last 2 and a half years, he would guarantee Boston about 2-3 more wins over the course of the rest of the season. In a tight AL East race, 2-3 wins can mean the difference between the Red Sox playing baseball or playing golf in October.

Since Rick Hahn is no idiot, he knows the Red Sox are desperate for an upper echelon starter. Quintana, with an incredibly team friend deal where he’s signed through 2020 for about 35 million, would net blue chippers in return from Boston. With Matt Wieters becoming a free agent after this season, Boston can afford to part ways with Swihart in exchange for Quintana, gambling on the fact that they can sign Wieters for 2016. Deven Marrero would complete the deal.

Blake Swihart to the White Sox

It’s an old baseball adage that a contending team must be strong up the middle, and by up the middle I mean at Catcher, SS, 2b, and CF. In case you were wondering, the White Sox are AWFUL up the middle. Tyler Flowers is the worst player in baseball. I don’t need to show you stats to support this. Carlos Sanchez is completely overmatched against big league pitching. Alexei fell off a cliff. Eaton is whatever right now.

In steps Blake Swihart and Deven Marrero. Swihart is the aforementioned blue chipper the White Sox would require in return. He’s an A+ catcher, has a projected 60-70 hit tool, 50-60 power tool, and would make a great battery with Sale, Rodon, and in the future Carson Fulmer. With that said, though he’s in the Show as we speak, he’s still a year plus away from reaching his potential. If the Red Sox are in “win now” mode as they claim to be, they will part ways with Swihart knowing Swihart probably won’t make a major impact in the post season run in 2015, starter be damned. If Boston can stomach dealing with a stop gap catcher for the rest of 2015 in order to make this deal come to fruition, then they make this trade 10 times out of 10.  And that is if they don’t make a move to upgrade the position in the present via a trade with another club, which they have the surplus or organizational talent to do.

Deven Marrero to the White Sox

Deven Marrero would sort of be a throw in in this trade, though the phrase “throw in” has a poor connotation. He’s a future starter at short stop. He projects to be an above average fielding SS with grade grade 60 tools across the board defensively, and projects to be a future grade 50ish stick to boot. With that said, he may never make a big league impact in Boston’s lineup, and with Boegarts at short for the foreseeable future, the Red Sox can afford to part ways with Marrero as well.

This is the part of the blog where I call Carrabis to the stand. Though he pissed me off to no end by exclaiming the Red Sox were going to acquire Chris Sale, he’s a good writer, knows the Red Sox inside and out, and by all accounts has no problem with confrontation, judging by the fact that he called out the Bosox big off season signing for instagramming in the dugout.

So, Jared, do you make this deal? Everyone knows your starting rotation stinks.  It’s a collection of 4s and 5s right now outside Bucholz, until he inevitably shits the bed again too.  I mean shit, I think I could start in that rotation!

Yes, that was just me showing off my goddamn cannon of an arm, again (don’t forget, I can launch a football 60 yards too!)

You claim you want to bump Rick Porcello and/or Joe Kelly to the pen, right?  If you want that to come to fruition, and if you want to solidify your starting rotation with a pitcher who will give you 6-7 innings of low maintenance yet cheap, quality baseball every 5 days, you make this deal.  If you don’t, there’s about 29 other teams in the league who would be glad to.  Get back at me.

Also, you can find me at on twitter at: