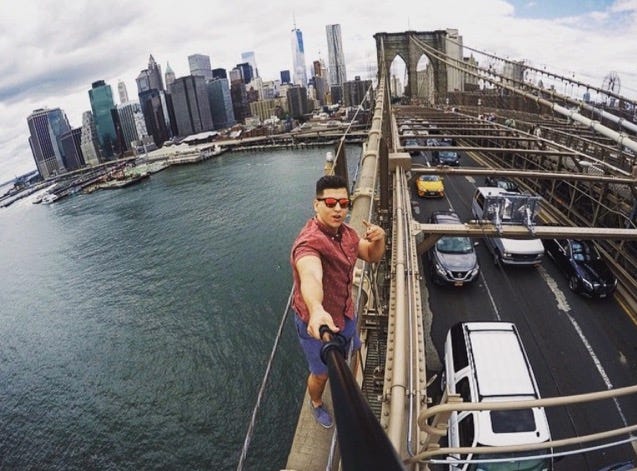 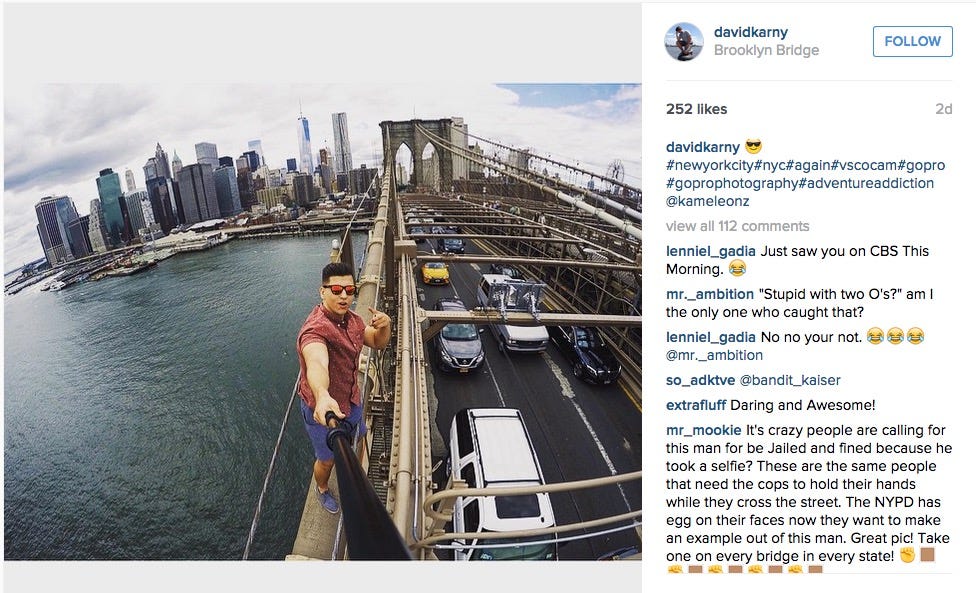 Gothamist – A University of Tennessee student decided to check off “use my selfie stick on the Brooklyn Bridge” from his #summergoals list. Now the NYPD is looking pretty, pretty embarrassed!

David Karnauch posted this selfie of himself on Instagram on Monday, with hashtags that included: #newyorkcity #nyc #again #gopro and #adventureaddiction. He told WCBS 2, “I didn’t have any clue that NYC is ramping up security. There was nobody there to stop me from climbing onto the bridge.” Are millennials not being taught about 9/11? If anything, NYC is in a constant state of “ramping up security”!

Ok that’s a sweet ass picture. Seriously soooo many people hate selfie sticks, just because they’re haters and think they’re supposed to. Those people have never climbed on top of the Brooklyn Bridge and gotten a bomb ass selfie of the NYC cityscape that immediately goes viral either. Honestly how much of that scenery would you get doing the standard “hold your arm out as far as it goes and angle it slightly downwards” selfie pose? Like 1/10th? Selfie Stick FTW.

Also this guy’s #SummerGoals list is pretty aggressive. Mine is basically get tan, be drunk 75% of the time, get more tan, don’t get arrested, don’t get fired. His is evade a major city’s police force to climb on top of a bridge a million feet off the ground to take an Instagram. Tone it down big man.

PS – Good to see the NYPD is being increasingly vigilant and stepping up their security game recently. What was that I was seeing all day long in the news yesterday? Something about how the terror threat has never been higher as ISIS plans a July 4th attack on the city?