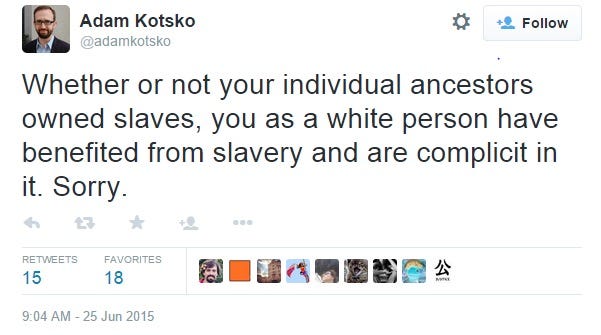 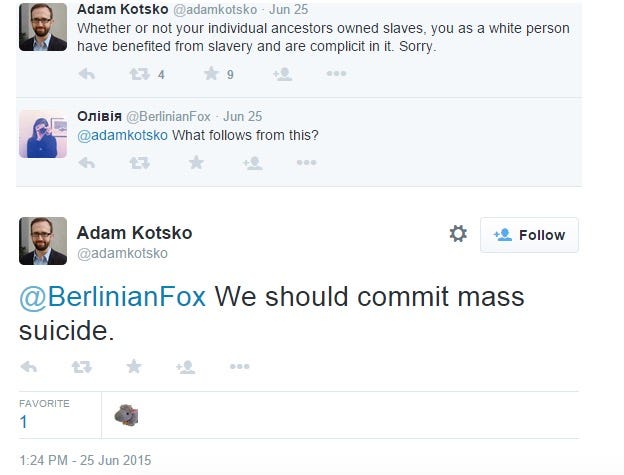 Social Memo – Responding to criticism, Professor Adam Kotsko, who stated publicly on Twitter that white people “should commit mass suicide,” now says that he was joking.

His “suicide” comment came after Kotsko unironically said that white people, even those born 150 years after slavery ended in the US and whose ancestors never owned slaves, are still “complicit” in slavery. Dr. Kotsko has expressed surprise that his ironic statement was not picked up as satire, despite the fact that he repeatedly defended his previous, equally-ridiculous comment.

“A reasonable person,” according to Kotsko, would be able to see which one of the following tweets was “ironic” (one of which was ironic, and the rest serious).

Jesus dude, could you be more of a pussy? An apology? A full page explanation on your personal blog? Somebody isn’t cut out for the #HotTakes life. Either seriously say all white people should commit mass suicide then start it off by leading the charge, or say it ironically and let it play out on social media without you crying about it being taken the wrong way.

I mean first of all, if you have to explain your sarcasm to people, your sarcasm sucked. Secondly and more importantly, if you’re going to be sarcastic, stand by it and don’t apologize for it. Third of all (thirdly?), I have a functioning brain so I was pretty clear on the fact that you were being sarcastic with the suicide part – but I’m also 75% sure your first original tweet in the chain was serious? Just judging from your past Twitter history? Can’t just mix and match tones like that. Not for nothing, but when your Twitter account just randomly switches between serious tweets on the issue of race and discrimination and “super sarcastic” ones, people might get confused.

Something like, sympathizing with the reasoning behind terrorists massacring and beheading journalists

Or just constantly shitting on #Whiteness allllllll the time 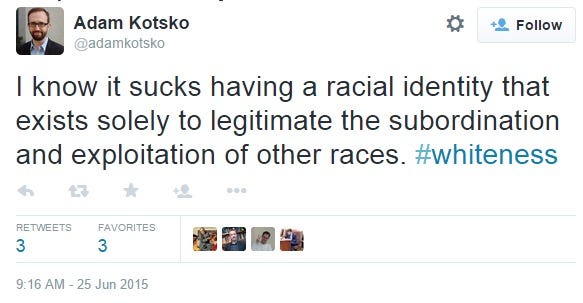 PS – An excerpt of his take on the situation from his blog, An und fur sich

Last time I found the whole thing upsetting, but this time it’s more hilarious to me. Aside from the fact that so many people can’t detect the most obvious sarcasm in the history of sarcasm, I find it amazingly hilarious that their damning evidence of me going so far as to “defend” my views was to quote someone responding “no” and me responding “yes.” It’s also becoming more evident to me, this second time through the wringer, that there are people who desperately need someone to actually state the exaggerated liberal views they fear — indeed, that they get off on performing their indignation and outrage. They’ve invested so much libidinal energy in their opposition to views that no one actually has held or would ever hold, and the occasion to release it no doubt comes as a great relief.

I don’t want to waste too much libidinal energy here, but our girl Saida Grundy would have to strongly disagree with your point there that nobody holds, or ever would hold, such strong views towards white people. 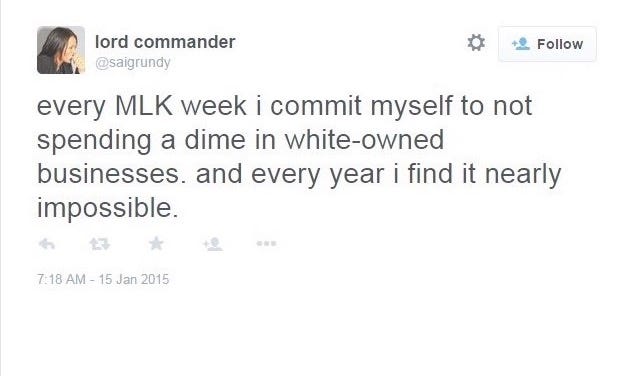 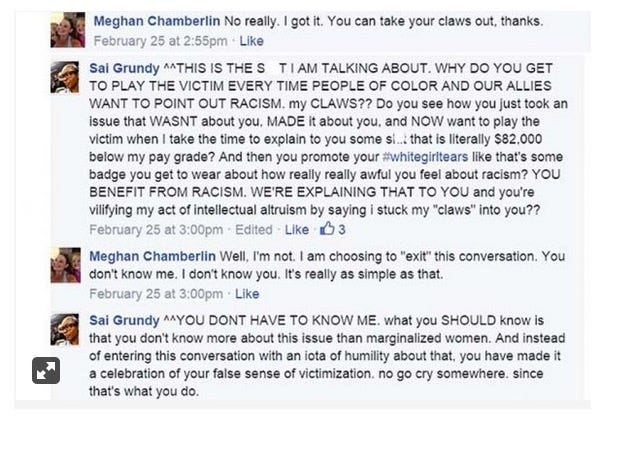