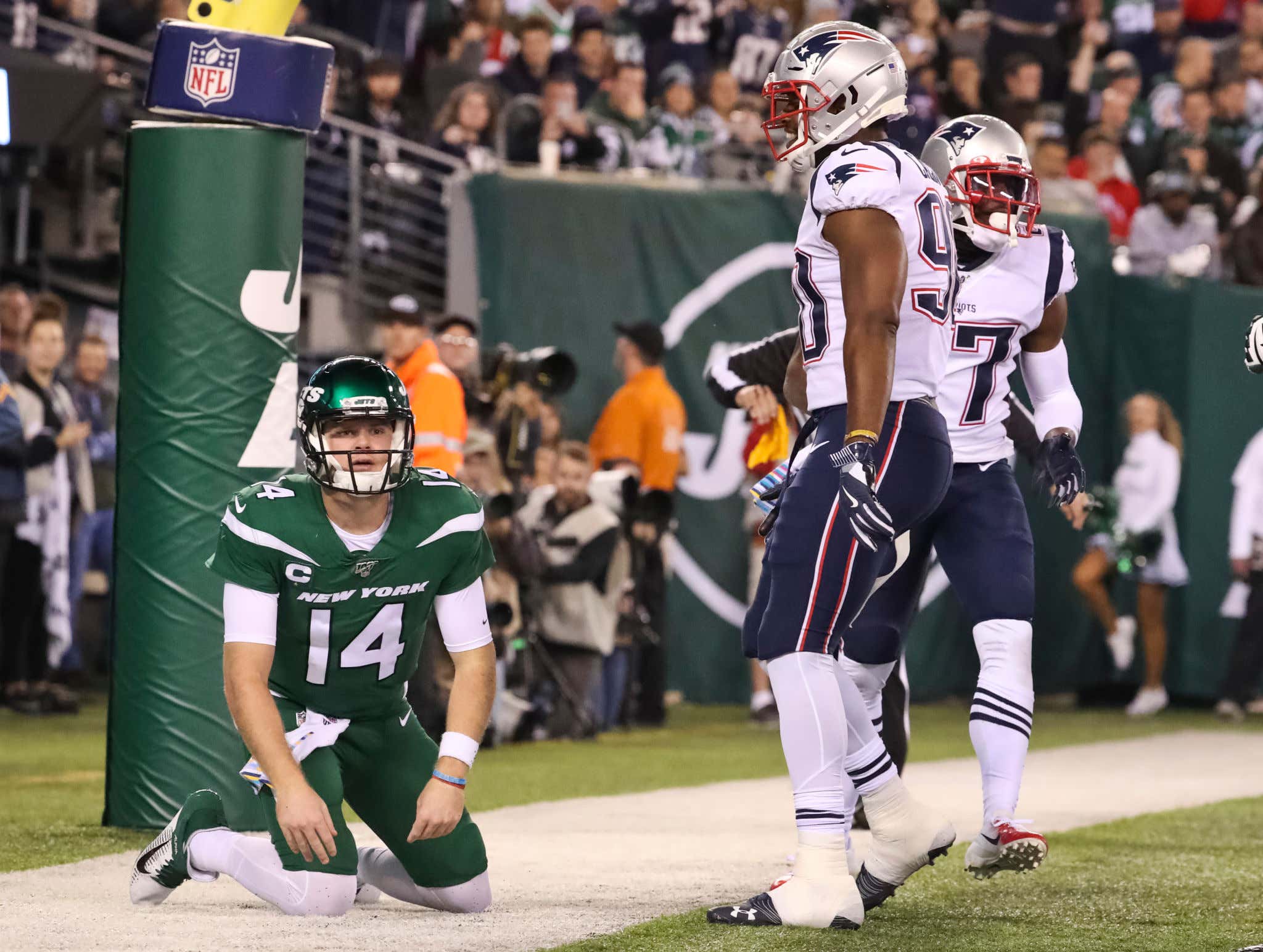 If you have a drop of the milk of human kindness in your soul, you have to have pity for Sam Darnold. There's no position in all of team sports more affected by the system you're drafted into, and no worse place to be drafted into than the place he was.

Three years ago, Darnold had everything going for him. A physically gifted star of an elite program. Smart. Personable. Ready to take on the world. But then he had the misfortune of being taken 3rd overall by the goddamned Jets and ended up like one of those ironic stories you hear about a lottery winner whose life turned tragic and would've been better off never buying the ticket.

He's still just 23. But being the Jets QB ages you faster than dog years or even being President of the United States. He's seeing ghosts. He's got the longest active streak of pass attempts without a touchdown, at 142. According to Elias Sports Bureau, if he doesn't throw one in his next eight passes, he'll be the only player in the past five seasons to go 150 straight attempts without a touchdown. (Nick Foles last did it, in 2015.) And among qualifiers, he's currently 39th in the league in passer rating.

Yet, in a twist, Darnold's team's failure will be his salvation. When the Jets finish 0-16 and draft Trevor Lawrence, he'll get his ticket out of town. And an article from SNY by NFL Insider Ralph Vacchiano lists 11 potential trade partners for the Jets. The usual suspects, such as Indy, Washington, Denver and Carolina. A few others that might be in the market for a backup/QB of the future. And this little franchise tacked on at the end. Maybe for clicks. Maybe because it might make sense.

New England Patriots – All you need to know about Bill Belichick’s commitment to young Jarrett Stidham is that he went out and signed Cam Newton to run the Patriots in their first post-Brady season. There have long been rumors that Belichick loved Darnold in the 2018 draft. But there’s no way Douglas would even consider sending a franchise quarterback to the Patriots. It would be the most Jet-thing ever if he did that and Darnold went to New England and finally became a star.

I have to admit, as wild, baseless speculation goes, this theory doesn't have the same seductive, captivating allure of Keyshawn Johnson's hot take that the Jets would send the No. 1 pick to New England and let them take Trevor Lawrence. But it's not bad. And 100 times more likely. Which isn't saying much. 100 X 0.001 = 0.1.

But it's something to consider, just as an intellectual exercise. I don't think the demand for Darnold will be particularly high. If they do end up with Lawrence they'll be motivated sellers. I have to believe that he can still be salvaged. Adam Gase as much as admitted to ESPN he's failed in his job to develop the guy. "We need to do things well around him, but at the same time, it's on me to get him to play better than what he's played," he said. "I haven't done a good enough job." And it's hard not to dream of what Josh McDaniels could do with a QB of his arm talent in a stable environment. Especially given that next year Darnold will be the same age as a lot of second year NFL players, at most.

But then like the man said, the Pats saving Darnold's career and making him into what he had the potential to be when they drafted him would be the most Jets thing ever. And franchises that perpetually live in fear don't make bold moves like that. It takes a GM like Belichick to trade a franchise QB in his own division and then exploit all his weaknesses twice a year. And there's only one of him. So ultimately Darnold will end up on some 4-12 team for a few years and sign with New England as a backup once his rookie deal is over. But until then, it's fun to think about.