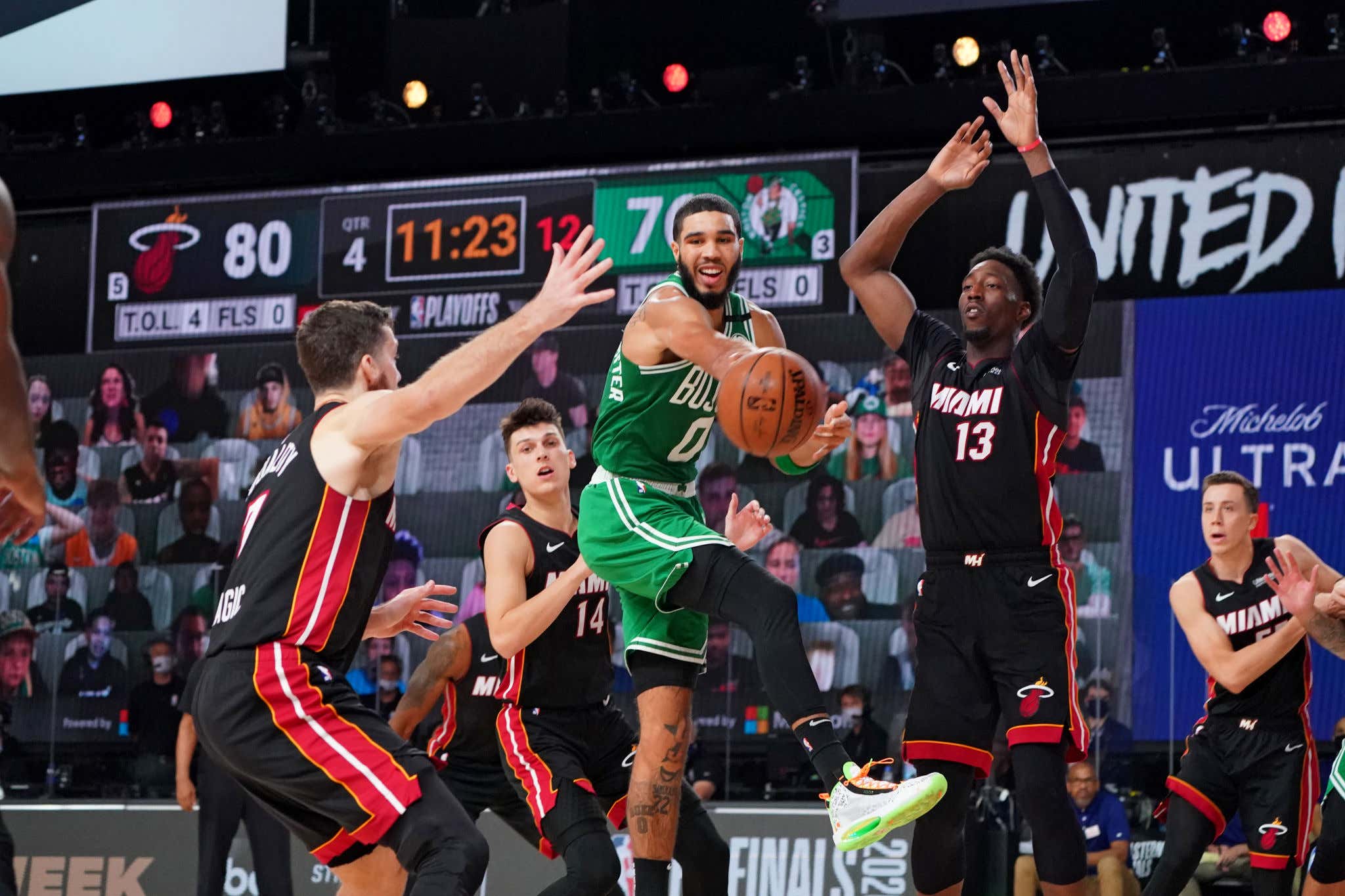 Over the course of last season, we witnessed Jayson Tatum take a legit leap. One that we thought would maybe come in Year 2, but there's no denying that Tatum played his way into being an All Star and top 15 player by making 3rd Team All NBA. It's also true that if the Celtics finally want to get over the hump, Tatum is going to have to take another leap. For me, it's not really about his scoring, or his defense. But now with Gordon Hayward off the roster, there is one glaring need for Year 4 when it comes to Jayson Tatum.

The numbers show he's trending in the right direction. He went from an 8.3% AST% his rookie season, to 10.0% in Year 2, to 14.5% last season. In the playoffs, we saw his AST% skyrocket to 21.3%. To help put that into perspective, Hayward lived around 18% during the year and 13% in the playoffs. So, there's reason to believe that the next version of Tatum will show to be a much better passer. It's not just about the numbers either, part of it is showing signs that he's improving when it comes to reading the defenses and making the right passes. Not just with easy reads either, but advanced ones as well.

I went back and looked at some plays we saw from Tatum that should have you excited for this development when you factor in how we all expect Tatum to be used offensively. Let's dive in.

When it comes to scoring in the P&R, Tatum is already pretty damn good. He ranked in the 88th percentile as a P&R scorer. We're going to see a whole lot of P&R with Tatum running the point, especially now that Kemba is out to start the year. Here's why that shouldn't worry you.

Our first play I want to talk about comes from Game 2 against the Raptors. This is something I imagine we're going to see a whole lot. A high P&R with either Theis of Thompson setting the screen. It's something we saw Hayward run a bunch as a playmaking wing. This helps show Tatum's development because as you watch the play unfold, you can see the Raptors have basically cut off both corners. Siakam is there on Jaylen, Ibaka is within closing distance of Grant. Fred VanVleet is primed to close out on Theis if Tatum decided to simply go there.

Instead, Tatum makes a great advanced read and goes with the crosscourt pass to Smart, which was basically the one place he could go that would make a Raptors defender a little slow on his closeout. To me, this is not a read/pass that Tatum really made earlier in his career. It may not seem like much, but it tells me he's getting better at reading defenses on the fly and understands where to go with the ball

Here's another good example, this time against the Heat's zone

Once again we're seeing the improvement in Tatum's decision making as a passer coming out of the P&R. Let's look at his options as soon as he comes off the Kanter screen 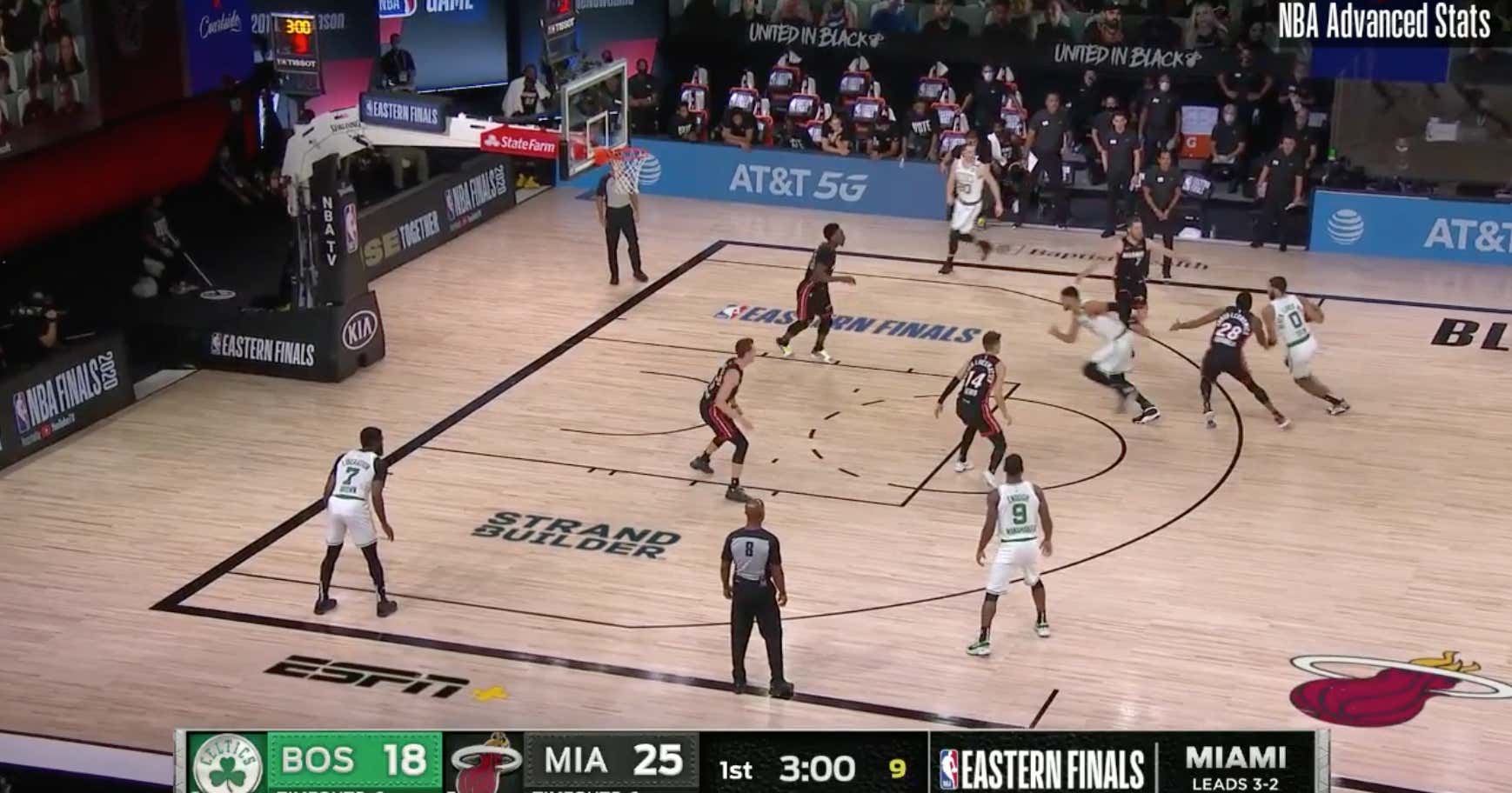 Kanter certainly isn't ready for the pass, Herro and Duncan Robinson are playing their passing lanes, and Dragic is right there to close off the Tatum drive with Bam waiting on the low block. There's really only one place to go, but the decision has to be made quickly. Tatum realizes that Bam is too far away to close out on Hayward and makes the right pass to the corner which results in the made three. What I love about this play is that Tatum didn't panic and force a pass that wasn't there. He kept his head up coming off the screen and read the zone perfectly. That's exactly what I want.

Of course, when you start talking about passing out of the P&R, it's not only about finding shooters. Tatum is also going to have to be able to be effective when it comes to finding the roll man. Sort of like this play.

This is where you really see Tatum's improved vision. Passing through multiple defenders and putting the ball in the perfect spot gives me faith that he knows what he's doing. This wasn't a one time thing either

Here we see Tatum attack from the wing with Lowry on his hip. 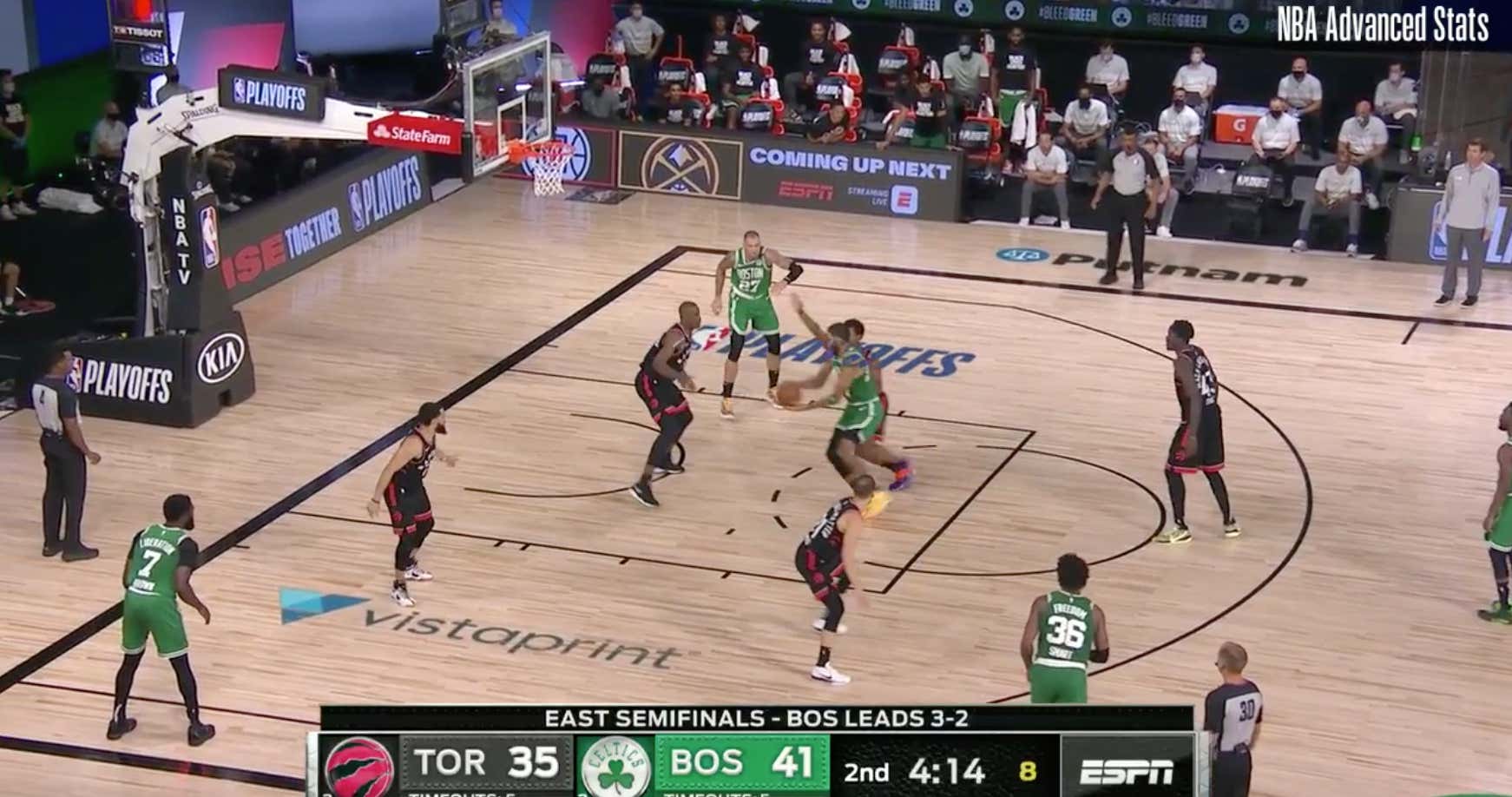 Instead of forcing a contested floater with Ibaka coming over to help, you can see Tatum is reading that play the entire way. He has the awareness to know where Theis is and times it perfectly with the Ibaka rotation. So much of Tatum developing into a better passer relies on his ability to get the timing down. Especially with all the attention he commands as a scorer. Given the addition of someone like Thompson, who is going to be much more of a roller than a pick and pop player, Tatum improving in this area will be crucial.

When the Celtics offense is at their best, we see movement from guys off the ball cutting to the rim. If you're going to have the ball in your hands as a primary playmaker, making sure you see and execute those reads is very important. Time and time again we saw Tatum was able to do just that this postseason. What made Hayward so valuable was his ability to use his handle to get into the paint and then have the awareness to find cutters. If we want the offense to flow seamlessly, Tatum is going to have to be able to do the same thing with the ball in his hands.

One of Jaylen's best skills is cutting to the rim, and if we can get more plays between the two like this one

It will help keep the defense honest. This is obviously a simple pass, but it's something that Tatum never really showed before. The accuracy, the timing, make the pass off the dribble, it's all part of his development. The fact that he was able to recognize the passing lane and deliver a perfect pass between three defenders is great to see. Plays like this bring me to maybe my most important reason to be excited about Tatum the passer

Passing off the dribble

For a guy that's going to have the ball in his hands a lot, Tatum's ability to pass off the dribble while not being in P&R is what I would call absolutely essential. While we know he loves to score through isolation, he is also showing signs of being a threat as a passer when he attacks.

Here we see him going up against a legit on ball defender in OG Anunoby who does a great job staying with Tatum on his drive. Even with Tatum completely shut off we see Serge Ibaka rotate over to help with Lowry sliding town to take Rob. 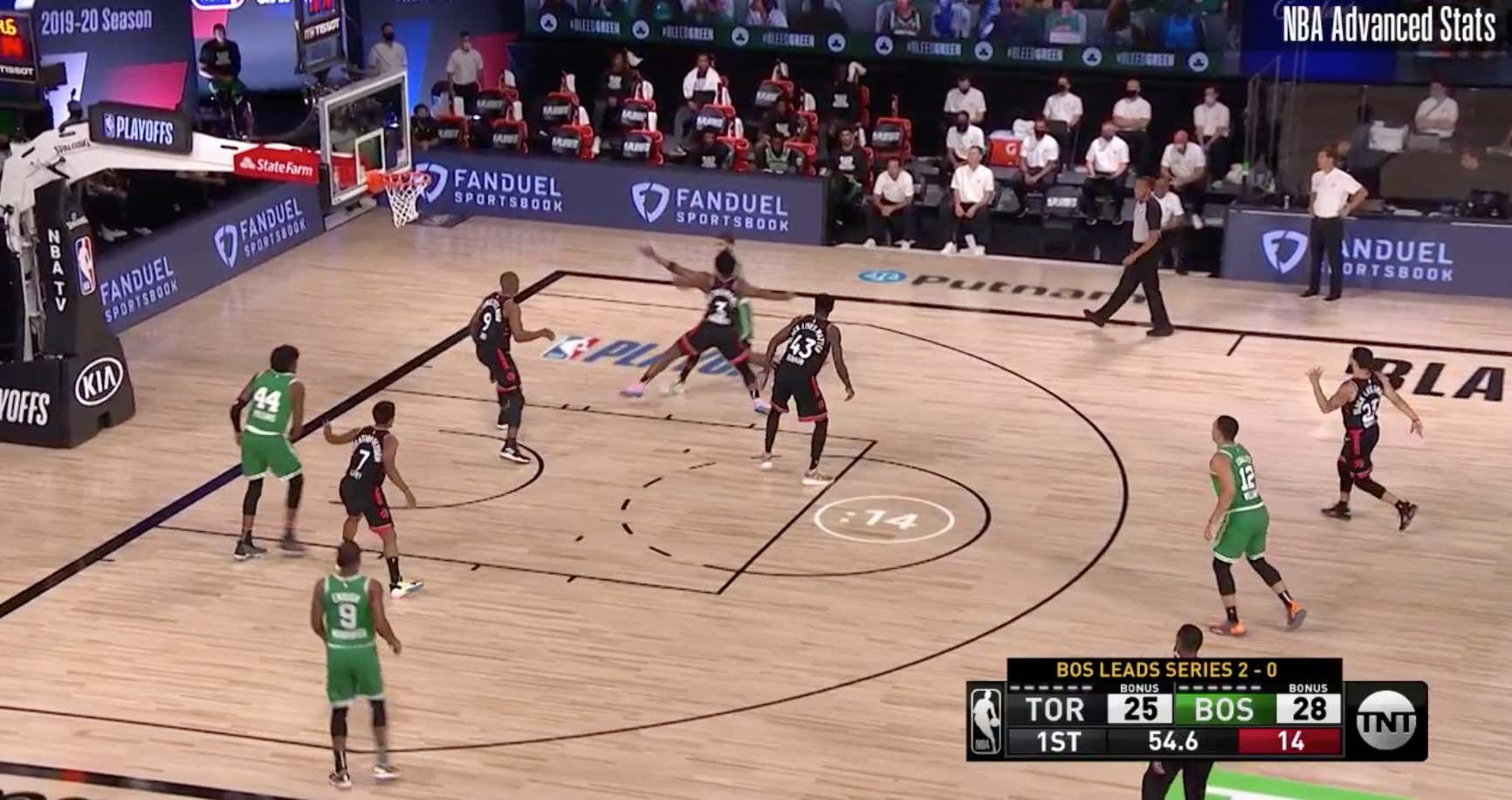 Without hesitation, Tatum makes a great read to find Wanamaker on the other wing, who is able to attack Lowry's closeout for the easy bucket. So why do I love this. Well, it shows that Tatum probably had an idea where he was going to go with the ball if the drive wasn't there right from the jump. Then once things started to unfold, he didn't try and force the ball to Rob with Lowry right there, but instead made a great read to help give his teammate an advantage. Thumbs up.

Here we have another similar play from Tatum off the dribble. Once again we see his development when it comes to making the right reads. First, he doesn't force things once his driving lane is closed off, but what stands out to me is his ability to look off Lowry every so slightly which gets Jaylen just enough time to get off the corner three. This is what I talk about when I mention Tatum's improved vision.

Ah yes, the lob. Something the Celtics haven't been able to do since Rondo. This is a situation where Tatum has a decision to make. He could pull up from about the elbow and take a contested jumper. In Year 2? Tatum probably shoots this ball. Now, I bet by the time Tatum got to the circle he knew he was passing. His head stays up the entire time and once he sees OG commit and Lowry not be there to help, it's a perfect lob for the easy two. This is the type of play that reminds me the most of Gordon Hayward. Against that defense, it's all about feel. Hayward had a great feel. Last time we saw Tatum, he was getting there.

I'm not trying to tell you these are complicated passes by any means. But what they help show is not only Tatum's skill as a passer developing but the fact that he showed to be a more willing passer in the first place. Early in his career it felt like that was not part of his game at all. When he got the ball, you knew he was looking to score and that was pretty much it. Year 2 was more about becoming more of a consistent defender. That happened. Year 3 was about taking the leap to become a legit star in the league and to do that you need a more well rounded game. His playmaking took a leap. Year 4 is about showing Tatum can be the elite superstar talent this roster needs him to be. With no Hayward and a banged up Kemba, his role has changed. He can't just be a primary scoring option. Tatum is going to have a super high usage rate, and with that he needs to make sure he advances as a passer and playmaker. If he doesn't, this offense is going to stall. The team won't reach their ceiling or potential and they sure as shit won't replace the healthy Hayward production.

If we see Tatum live in the 4-5 assist range with around that 21% AST% which is basically what we did in the playoffs, he'll be well on his way to taking that important leap. Fingers crossed.