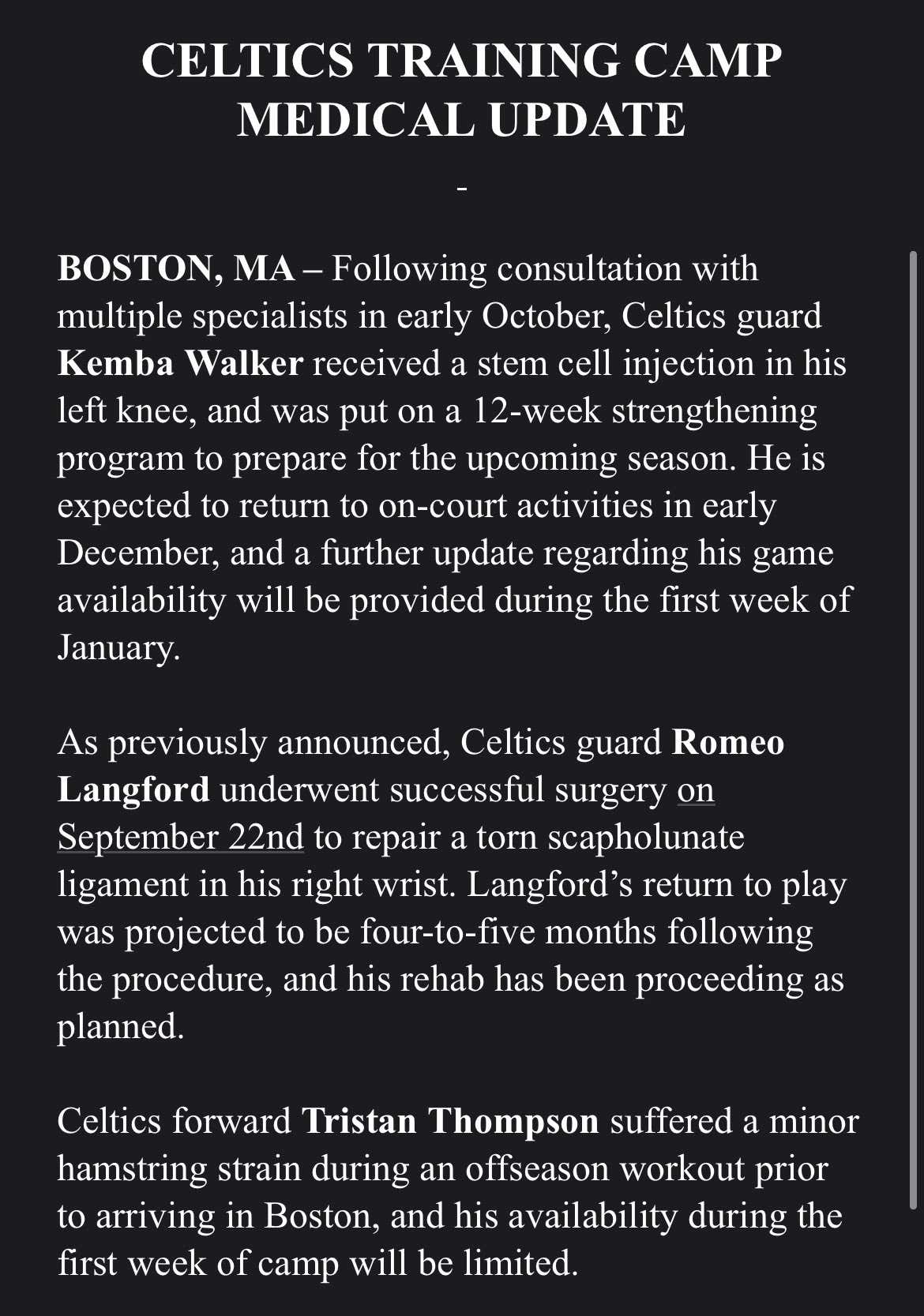 Well isn't this just fantastic! What a great way to start our day. As if this team didn't have to deal withn enough injury bullshit last season, we're already off to a quick start for the 2020-21 season. Now I'm not a doctor, I did not stay at a Holiday inn last night, but I'm pretty sure getting a stem cell injection into your knee probably isn't the best. They don't do that to healthy knees I would imagine. I'll be honest, I don't really know what stem cells are. They replicate healthy tissue or something right? Can that just be what it does so I don't have a mental breakdown on the blog right now? Ok cool.

This is why Kemba's knee was my #1 question heading into the season. I wrote this fucking yesterday

This might very well be the most important question of the season. Everything revolves around the health of Kemba's knee both in terms of their ceiling and floor. If he never gets right, it's a big time problem. Simple as that. We already heard that they are going to bring him along slowly which I don't know how you wouldn't be concerned about that. A healthy Kemba is so important to this offense. The way he can penetrate the defense and finish at the rim, the way teams have to defend him which opens things up for the two Jays, having someone available in the clutch, it's all very important.

We now know why Brad was talking the way he was the other day when asked about it. They aren't just bringing Kemba along slowly, now he's going to miss part of the start of the season? If I read that statement correctly, they aren't saying he'll be back in early January, just that we're going to get an update about his potential return in early January. Who the hell knows how much time he's really going to miss.

Now we know why Jeff Teague is on the roster. He's the Kemba insurance we all wanted them to find this year. Payton Pritchard's pick also makes a lot more sense. If it were up to me, the Celts would load manage Kemba in such a way that even Kawhi Leonard got jealous. I don't care what they have to do as long as he can be 100% for the playoffs. That's all that matters.

So now the question becomes, what does the starting lineup look like while Kemba is out? I think there's a strong chance we see Smart/Jaylen/Tatum/Grant/Theis. I know people want to see Thompson start, but I think with the shortened schedule we'll see Theis get the nod at first. Last season when Kemba was out, Gordon was on the roster. With him gone that's why I think Grant slides in. From a talent standpoint, that's definitely a lineup with much less firepower than the healthy starting five we saw last season, and now it's even more important that guys like Tatum get off to a good start, something he has struggled with in his career.

I know this will probably be downplayed by the team, but I'm sorry. I've lost all trust when it comes to them and injuries. We were told this was no big deal, just a nagging injury knee thing with Kemba, and he in fact is not getting better but is instead getting stem cell injections. I dunno call me crazy but that tells me that maybe things aren't all that great!

Love the Hospital Celtics though. If anyone can pull out shorthanded wins it's this group. I just can't believe we're already doing this and the season hasn't even fucking started yet.