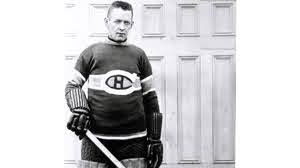 The Montreal Canadiens, who lost the Stanley Cup to the Victoria Cougars of the Western Hockey League, begins the season by hosting the Pittsburgh Pirates, playing their first NHL game. Despite battling a high fever, goalie Georges Vezina dress and starts for the Canadiens. During the first intermission, Vezina collapses. He recovers and retakes the ice in the second period. However, he collapsed again and was hospitalized as Pittsburgh won 1-0. A day later, Georges Vezina was diagnosed with tuberculous and died four months later.

Georges Vezina was born on January 21, 1887, in Chicoutimi, Quebec. The youngest of eight children of a French immigrant who worked as a baker working in a remote area of Quebec. Vezina grew up playing street hockey and did not use skates until he was 16. As he grew older, Vezina made a team that traveled through the Provence of Quebec, playing in goal.

As the NHA dissolved and the NHL took its place, George Vezina remained steadfast between the pipes for Montreal, as they were upset by the Seattle Metropolitans of the PCHA in 1917. In 1918, Georges Vezina recorded the first shutout in NHL history. The Canadiens and Metropolitans met again in the 1919 Stanley Cup Final that was halted due to the Spanish Flu Pandemic. Vezina would lead the Canadiens to a second Stanley Cup Championship in 1924 before they were upset by the Cougars in the 1925 Stanley Cup Finals.

When Georges Vezina reported to the Canadiens for the 1925/26 season, he was not in good health; he had lost 35 pounds and was dealing with fatigue and a persistent cough. Vezina had a high fever and insisted on playing as the Canadiens hosted the Pittsburgh Pirates to start the season at Mount Royal Arena. Vezina complained of chest pains but tried to play. After a scoreless first period, the Canadiens goalie blacked out in the locker and was vomiting blood. Despite continued struggles, Vezina took the ice with his team. While on the ice, Georges Vezina collapsed and was carried off and taken to hospital as he began bleeding out of his mouth. The Pirates would win the game 1-0 on a goal by Lionel Conacher as Alphonse Lacroix finished the game for Montreal in goal. It was the first time in an 18-year career that Georges Vezina did not finish a game.

Georges Vezina was diagnosed with tuberculous a day later. The Canadiens would pay Vezina his $6,000 salary for the season, as he said goodbye to the team on December 3rd. Georges Vezina died in his hometown of Chicoutimi on March 27, 1926, less than two weeks after the NHL's regular-season ended. The Canadiens struggling to find a goalie finished in last place at 11-24-1.

In tribute to their fallen goalie, the Montreal Canadiens named a trophy in honor of Georges Vezina that would go annually to the NHL's best goalie. It was the first trophy to be named in honor of a former player. Vezina was among the first players enshrined in the Hockey Hall of Fame in 1945.