ESPN- As the fantasy football regular season winds down, we at ESPN Fantasy would like to alert you to a key positional eligibility change: Taysom Hill is no longer eligible at tight end and quarterback is now his primary position. Below, you will find answers to questions you might have with regard to how this impacts your fantasy team and/or league.

1. What is Hill's eligibility going forward?

Beginning in Week 12, Hill is eligible at QB only.

2. Why the change now, and not last week?

Hill played the entire game at QB in Week 11 and is expected to continue in that role, at least primarily, until Drew Brees returns as the New Orleans Saints' starting quarterback.

Early last week, ESPN Fantasy maintained it would not take away Hill's primary position eligibility of tight end once the league week began on Tuesday. The reason for this was for fantasy managers to be given ample time to make necessary roster assessments and lineup decisions before waivers processed early Wednesday morning and in advance of the first game of the week Thursday.

Now that it has been established that Hill will be primarily a QB, and with the above framework in mind, ESPN Fantasy is able to make the change at the start of fantasy Week 12.

Not likely. Based on what we know, the expectation is that Hill will remain eligible only at quarterback. Note that a player's eligibility is always at the discretion of ESPN Fantasy, based on what's best for the competitive balance of the game.

First off, to everybody who had Taysom Hill at Tight End this weekend, let me say that I am sorry for your loss. The only thing worse than getting your dick kicked in because your opponent had a glitch put up 233 yards passing, 51 yards rushing, and 2 rushing touchdowns from the Tight End position is to have that glitch put up those numbers and then lose it a week later.

As someone that experienced the joy that came with having Marques Colston play Tight End for an entire season despite being a Wide Receiver once upon a time, I understand just how glorious Sean Payton's tomfoolery was to watch last Sunday. Well maybe not as much as you because starting a QB at TE is fucking preposterous.

As you would expect, ESPN completely botched this entire process by actually having this on their support page before updating it.

They also have Hill in this weird no-mans land where he is still locked at TE and can still score points there unless a commissioner does something about it.

4. What if I leave Hill in a starting lineup spot other than QB going forward? Will I still get the points he scores?

• If Hill is left in the TE, Flex or WR/TE slot, users will be unable to make any roster or lineup moves until they remove him from that slot.

• If a user chooses to not remove him from that slot, the user will receive points for Hill's performance. However, if your league deems that to be an unfair advantage, league managers (LMs) have the ability to move Hill out of the starting lineup for any team in their league.

• To do so, LMs should visit their league on the ESPN Fantasy website, select "LM Tools" from the sub-navigation and then select "Roster Moves" from the "Roster Tools" section. From there, the LM can choose to edit the roster of the team that rosters Hill, including the ability to drop Hill, if that is desired.

• If your league has roster minimums and maximums at QB and/or TE, it's possible this change could invalidate your roster and you might be forced to make roster moves in order to field a valid roster.

5. What if my league doesn't like these decisions? Is there anything the commissioner can do?

Yes, if you are in a private league, the commissioner can use the LM Tools to make changes that reflect your league's desired structure.

Among the things that can be adjusted using LM Tools:

• The scoring of any matchup: To do so, the commissioner should visit his/her league on the ESPN Fantasy website and select "LM Tools" from the sub-navigation. Then, in the "League and Scoring Settings Tools" section, he/she can select "Adjust Scoring." This will bring the LM to the league scoreboard page where he/she can select the week and the specific matchup he/she wants to adjust.

• Roster moves to alter starting lineups, within the constraints of positional eligibility: As explained in question No. 4, LMs should visit their league on the ESPN Fantasy website, select "LM Tools" from the sub-navigation and then select "Roster Moves" from the "Roster Tools" section. From there, the LM can choose to edit the roster of the team that rosters Hill, including the ability to drop Hill, if that is desired.

For the people that are going to move Taysom Hill because they want to be able to make another move in a sport full of injuries and coronavirus positives: Don't cry because it's over, smile because it happened.

For the people that refuse to move Taysom Hill: I look forward to the upcoming civil war in your league between you, the commissioner, and everyone without a QB at TE.

Secondly, to everybody who DIDN'T have Taysom Hill on their team last weekend, congratulations on being able to throw an asterisk on the league member that started Hill on Sunday, regardless of if they won or lost. Yeah everything was done within the rules and all that mumbo jumbo. But what's the point of playing fantasy football if you can't discount anything smart your friends ever did while calling them a cheating piece of shit? In fact, if you don't slap a giant asterisk on whoever wins this season's championship because they won it during a coronaseason, you are simply too nice of a person to be a real fantasy football manager.

Finally, let's take a moment to remember all those friendships that died last week because the people at ESPN couldn't figure out where to put Taysom Hill during his 4th season in the NFL (along with a few people who actually had fun with it). 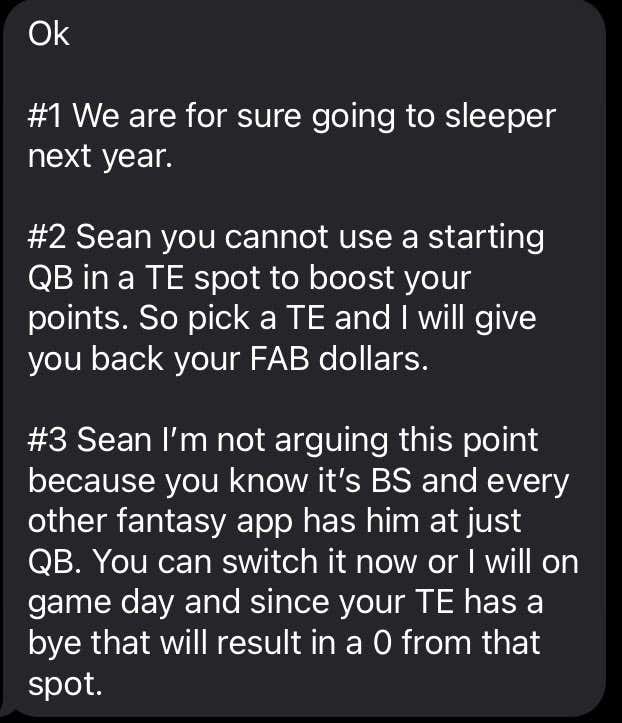 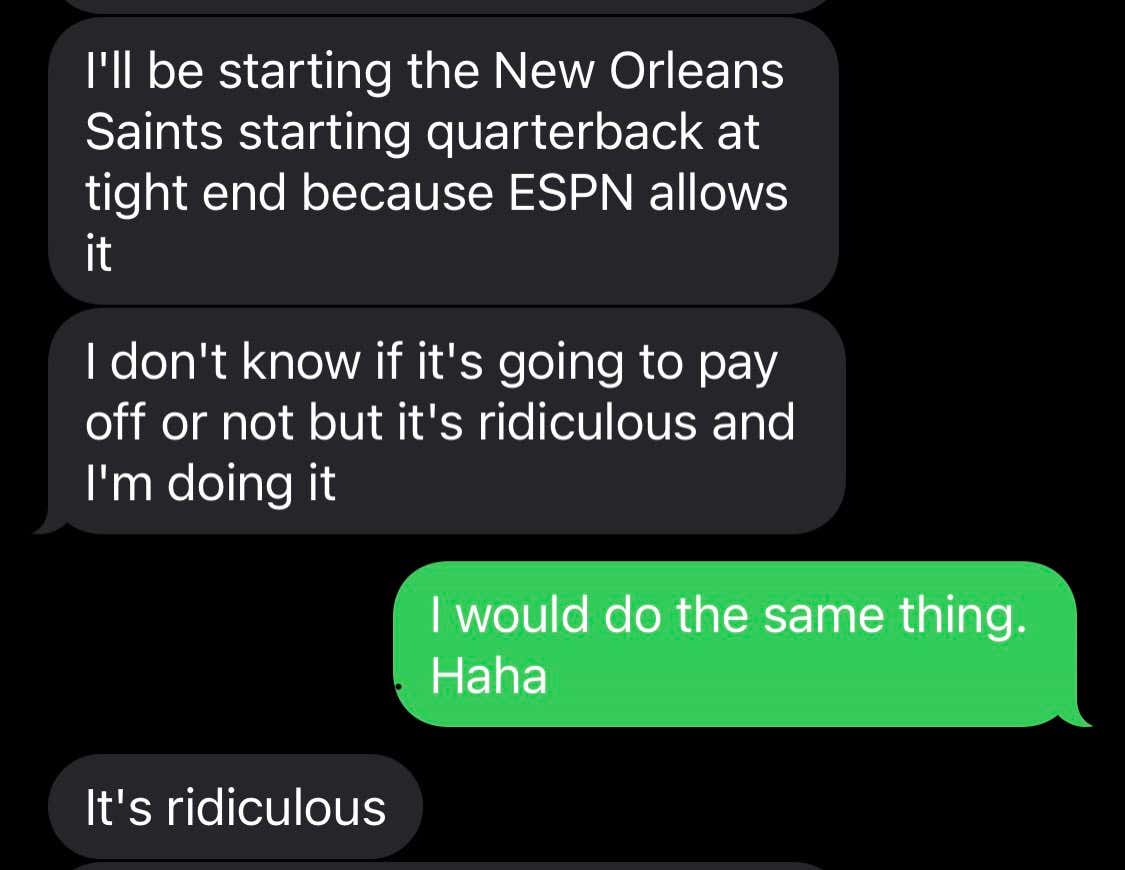 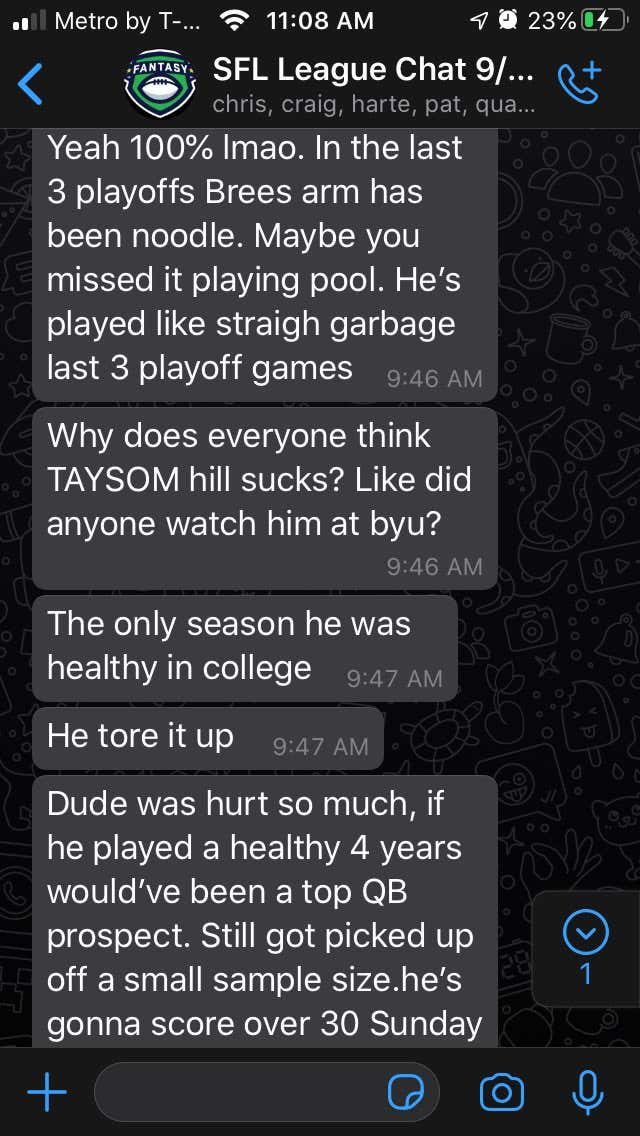 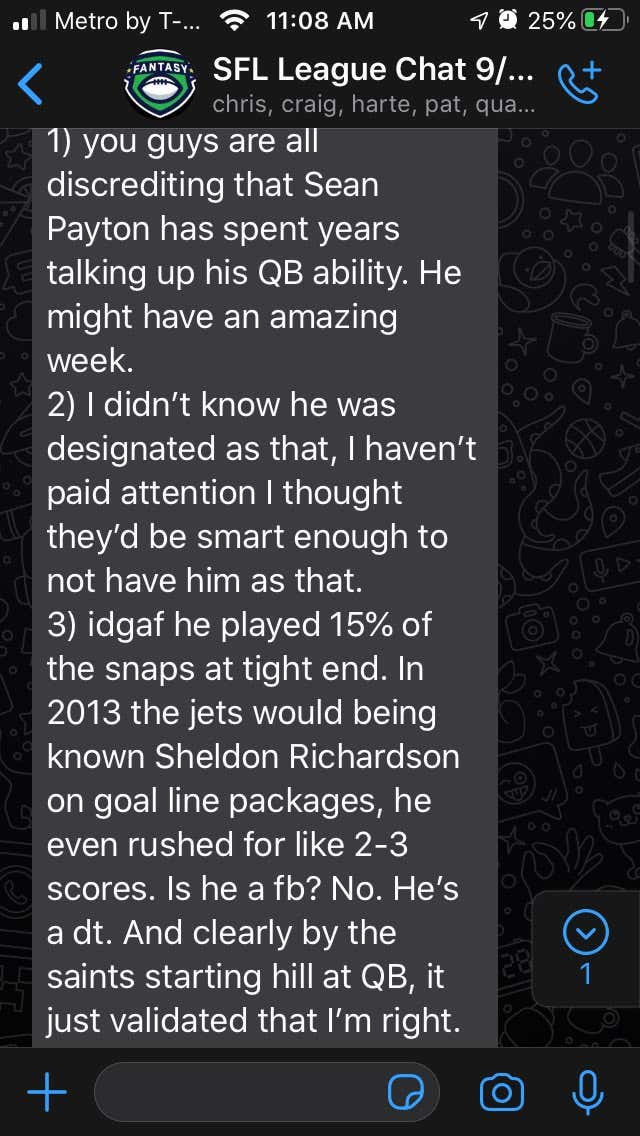 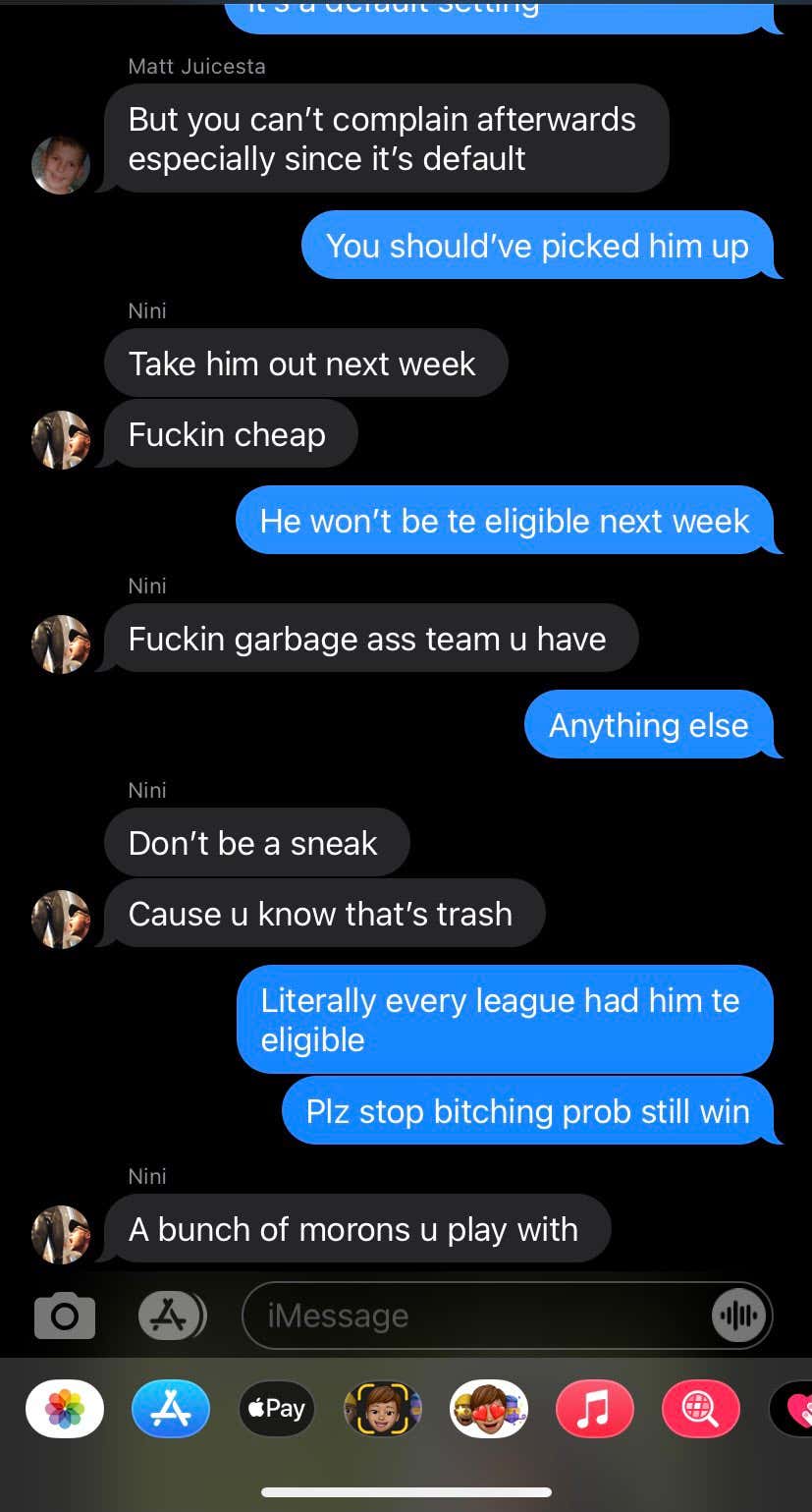 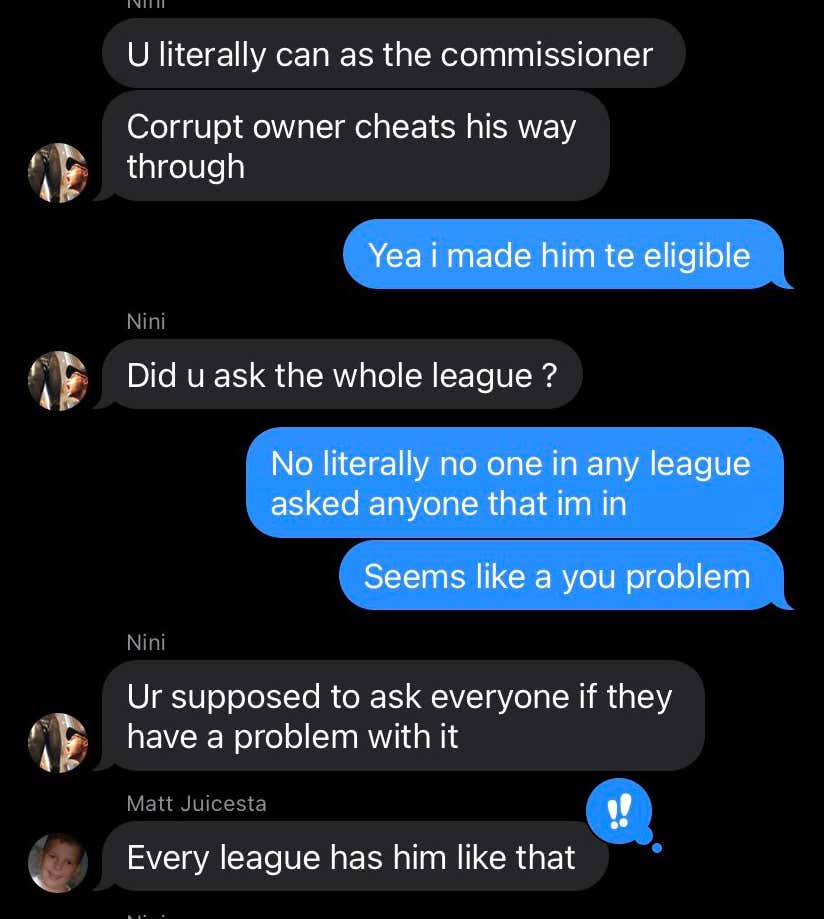 God I love how angry fantasy football makes people. The greatest/worst thing God has ever created. And I'm not just saying it's gooe because I am the co-manager of an absolute wagon of a team in the Barstool fantasy league. 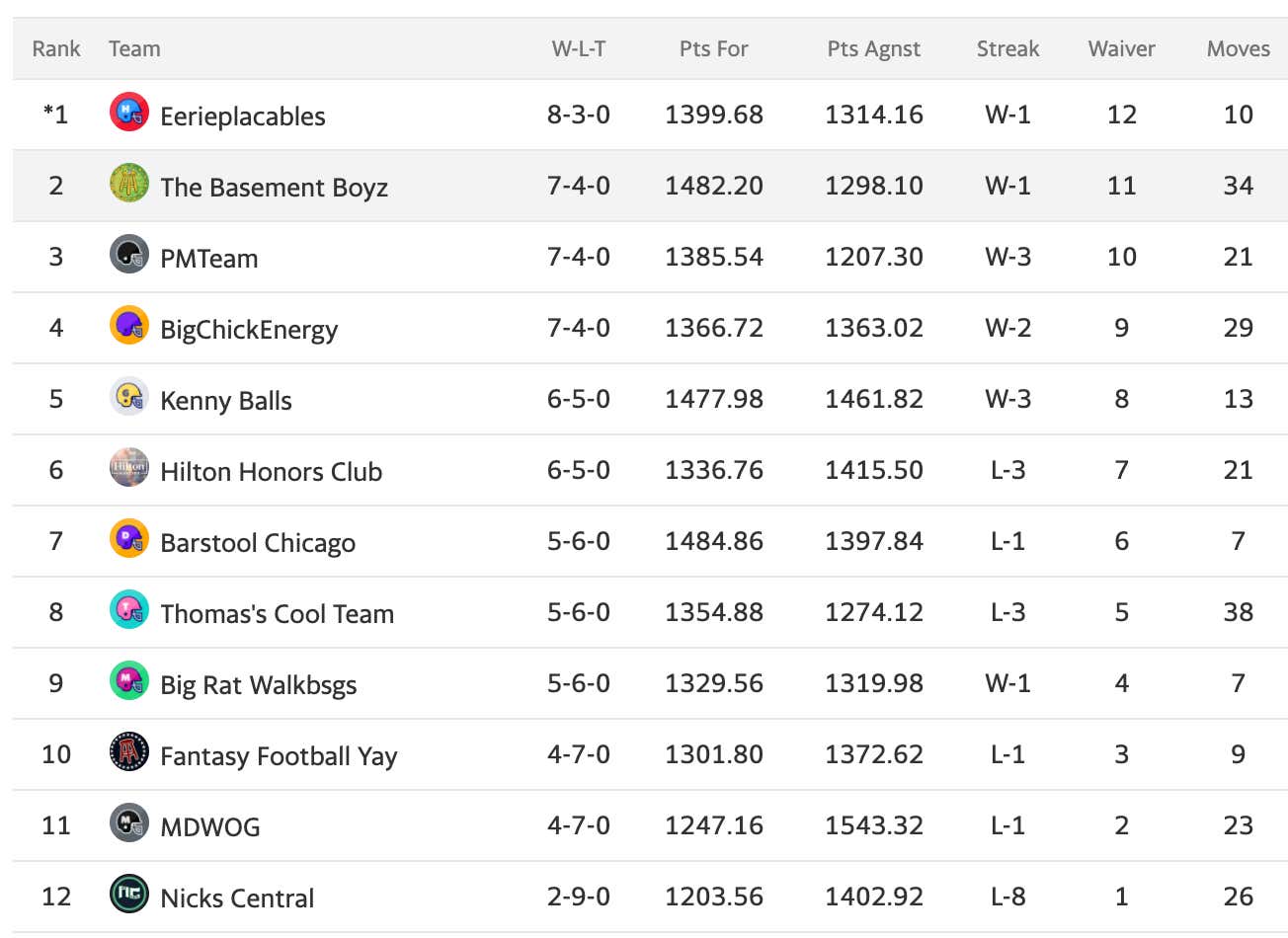 If Steven Cheah is a Jr. Draft Analyst for the NFL Draft what does a grade like this make him for fantasy drafts? A baby draft analyst?

YIKES. Fuck Matt Ryan forever and a day though, he was a late round pick that is currently benched for Cam.

As a special treat to everyone that made it this far in the blog, don't forget to put your waiver picks in. Do it now if you have to. I'll be rooting for you the rest of the season!

Unless you are in one of my leagues. In that case, I hope bad things happen to you and only you as well as all the other teams that are not my team